Ride on April 23
Syon Park Refectory found Lisa and myself awaiting the club, a text message from Jake asked if we were there as she was lost along with Ian and Leader Ed! - Losing their way in Kingston and Richmond. Jake turned for home to pack for Majorca the next day. Lisa punctured on the canal route, I punctured a bit further on fortunately outside The Old Oak Tree Pub near Bulls Bridge. An interesting visit, run by indians not much english spoken, an indian style menu served plate by plate. Highlight for Ed was passing the Art Deco Gillett building and a wonderful double Birthday Tea for Ed and Daphne at Daphne’s place at North Cheam. Steve & Ann, Frank & Francoise & Jake all met us there.
A damp day but not unpleasant.
Posted by Pete at 20:04 No comments:

C&M Attendance up to Easter 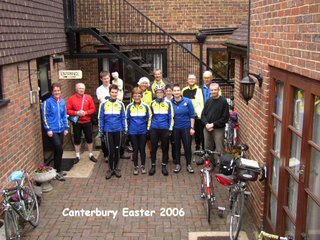 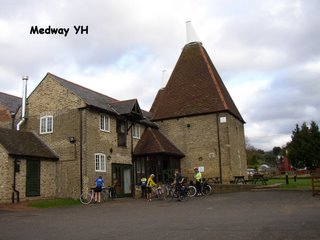 Easter Tour to Canterbury
Thursday: A Day of Strong Tail Winds.
We met at the Knights garden centre at Godstone. Pete M, Joanne Fricker, Pam Jones, Don Clarke, Jake Dodd and Terry Lowe. One idea was to have a stop at Shoreham Museum but it only opens on a Sunday! Lunch at The Kings Arms went down very well and so onward past Lullingstone Castle (only open at weekends) to cross the busy A20 on to Meopham gently rolling down to the M2 Medway crossing. The cycling track has turned into a fast railway since my map! Fortunately the cycle track is now on the opposite side of the bridge. Rochester for a tea stop & on to a warm friendly welcome from Margaret the manager at Medway YH. Highly recommended for its showers and above average food.
Friday dawned overcast turning to steady rain. Cycle route 4 was diligently followed to Sittingbourne & its steam train providing great interest but no tea bar! Coffee in the town at a nice café & onward still in the rain onto Cycle route 1. A complete disaster to start with – poor signs (none) to start with, dead end in a brick works, Don punctured, through a mucky travellers site complete with rubbish and eventually onto good lanes well signed to lunch at Faversham for a pub feed: 9 of us having sandwiches and coffee! The cycle route & weather improved all the way to icecreams in the warm sun at Whitstable Harbour followed by the undulating "Crab & Winkle" route - 7 miles off road into Canterbury, where finally all 22 of us got together for an Italian meal in the evening.
Posted by Pete at 18:10 No comments:

The C&M hardriders assembled at the start for "a Richard ride" into the little explored area of Kent east of Trottiscliffe.
Being hardriders, we began with just four (Richard, Ed, Keith& myself) to be joined later by Ian A.
Progress was swift through to West Wickham and as the obligatory toilet stop was reached, Ray Harrison was seen disappearing over the horizon. A few miles up the road we exchanged pleastries and discovered he was on his way to breakfast at a diner? at Polhil. His parting remark reminding me of the inclement weather that was expected to roll in (when he was safe in doors!).
Ian arrived as we were about to leave (as usual) but we of course waited a few minutes whilst he gulped down his tea and then took the main road to Farningham. Shortly after this we lost Keith at a dodgy junction, for him to only to reappear half an hour later just past Fawkham Green.
A number of discussions were had in relation to the chances of making Birling by 1pm, however on reaching the attractive village of Trottiscliffe it was felt that we would only continue to Ryarsh (3/4 mile short).
After lunch,the route took us via Wrotham and the fine track through St Clere, Kemsing and emerging on the footpath at Otford BR.
I managed to influence the choice of route from there and we took the quarry road next to the A21 to bring us out to Knockolt hill.
Evolution 1 is the name of Downe's tea shop and very impressive are the rock cakes (£1.25). Incidentally, the church hall reopens 11 June-8 October inc(Sundays).
Unfortunately, the ride home was in rain and sleet but later in the evening my thoughts moved to the forthcoming Easter Tour at Canterbury, my first club tour for around 10 years.

Website of the week: http://www.southwarkcyclists.org.uk/
All you need to know for the 2006 Dunwich Dynamo (8/9 July). Use Simon's night rides as a warm up to the event.

Have a Happy Easter!

Posted by Tartan Socks(long) at 10:52 No comments:

Today,I wheeled a bike from my shed that hasn't seen the light of day since my last trip to Mallorca several years ago.On that occasion Britannia Airways took such wonderful care of my machine that on inspection at home,the handlebars had suffered an enormous weight being placed on top and were rendered useless.So when Ed Sharp recently started supplying me with unwanted cycle stuff,I was pleased to find a set of handlebars.
We seemed to take all the spare tables at Runnymede which allows for some descrepancy in numbers but it totals around 14.I made a mental note of the establishment opening New Years Day 11-4.
With Irene cracking the whip 10 set off for Dinton Pastures.With a keen NWesterly bringing a couple of downpours,the destination was moved to Jealott's Hill and a pub with a few farm animals in the yard.It was with some amusement we watched the local children feeding the goats ......................chips from the kitchen!
With Pete M still heading NW,the rest(Graham,Gopi,Joan,Ed,Keith,Terry,Jake,Irene & myself)
made for Irene's place for tea.Still dodging the showers,we came upon the little piece of heaven that is home to Mrs North.After Graham had provided the obligatory tour on three storeys we settled down to drink and eat.I think we all agreed that Irene had bagged a lovely appartment that seemed to good to be true (superb views of the Thames on her doorstep,good shopping within a stones throw,very high standard of fixtures & fittings together with virtually no redecorating required).
With no sign of the "Boat Race" ever getting underway,we returned to our homes(no views of the Thames)via the rather enjoyable Thames cycleway which even after the considerable soaking proved pretty easy riding.


There is now a link that I have set up from "Bicycle Blogs Directory" http://links.tortoiseandharedesigns.com (Click on "clubs" and see a link to our page)
Posted by Tartan Socks(long) at 11:31 No comments: