I have decided to cut short ride as various people have shown concern about the distance to Dew Drop Inn. After 11s I will make my way to Maidenhead via Cliveden, lunch will hopefully be at The White Hart, Money Row Green, unfortunately no sandwiches but small portions on several meals. Afternoon tea will be at The North Cafe Staines.
Posted by RaasayWarden at 15:30 No comments:

I arrived at Oaks Park with my sister Moira who was visiting from Canada in time for a coffee.  Just before 9 we were joined by Matt and a few minutes later by Dave.
The four of us  set off towards Woodmansterne before riding through Coulsdon and across Farthing Downs to Caterham.  This was followed by a quick descent of Burnwood Road and shortly after a not so quick ascent of the hill up to Woldingham Church. Then it was an easy downhill ride to our coffee stop in Westerham where Bob was waiting.
Dave and Bob left us there so three headed up Hosey Hill towards Chartwell then Four Elms and Bough Beech before turning onto country lanes passing through farmland and woods.
Then a climb - Bayleys Hill was the gentlest I could find to get us up to Stone Street although Moira wasn't convinced.  After that it was a gentlish ride through forested roads to our lunch stop at the Padwell Arms.
Matt headed off into Stone Street to find a picnic spot while Moira and I checked out the menu at the Padwell.  On the reconnaissance I chose the small portion of whitebait but was completely defeated.  Moira decided on a cheese and pickle sandwich this time so I chose that as well but had to leave the salad.  The Grumpy Old Git bitter is recommended.
After lunch it was downhill to Seal then on to Kemsing to pick up the Pilgrim's Way.  A few miles of easy riding then a long slog up Starhill Road.  That put us on more or less the same level as Tatsfield so the remainder of the ride to tea went quickly.
The forecasted shower started while we were having our tea so we moved inside until it finished.  After tea a shortish climb up to the Croydon Road roundabout then downhill through Warlingham to Purley.  Moira and I turned off along Woodcote Valley Road leaving Matt carrying on towards Belmont.
In total about 57 miles.
From Dave S
Pictures here:

My ride to Staines seemed to have more headwind than expected but I consoled myself with the thought of being blown home later. Ten were already seated in The George when I arrived and a couple more arrived soon after including Peter on his first Sunday ride.

The nine heading for lunch were Vic, Ed, Tony, Paul, Peter, Graham, Ray Wren, Brian G and me. Alan joined us for the first part of  the route while Bob, Don and Dave W headed off for places various.

Departure was interupted by Tony rushing back to recover his helmet but we were soon heading for Egham via the level crossings. Through the backstreets we rode up Malt Hill to warm up the legs before crossing the A30 and up Middle Hill and Barley Mow Road. Then on to Savill Gardens where we entered Windsor Great Park and looped around to Ascot Gate.

Onward to Ascot Racecourse where we entered the centre by the tunnel and rode across to the A322 before cutting across to Forest Road and on to Winkfield Row. Turning right at Hayley Green, past Warfield church, through Moss End and then a mile of bridleway to reach the ford at Wesleymill.

Over the M4 on Drift Road we then headed north to White Waltham before passing west of the airfield on Butchers Lane before turning right at Orchard Farm and approaching Littlewick Green across the fields.

The sun was still shining when we reached The Cricketers so lunch was taken outside overlooking the cricket on the green. The roasts were very popular and by limiting myself to the still very generous "childs" portion I still found room for the treacle sponge and custard.

After lunch we continued across the fields and then around the east of the airfield and back to White Waltham. From there we headed south back to Drift Road for a three mile easterly straight blast. The wind was definitely behind us and good time was made. Heading north through Fifield and over the A308 we passed Bray Marina before crossing the Thames on the wooden bridge to reach Dorney Lake.

After cycling alongside the lake we used the Thames Path to Eton before crossing the old bridge to Windsor. The last hill of the day took us up past the castle and down the High Street before crossing the Long Walk, passing through Old Windsor, and along to tea at The Pleasure Ground in Runnymede.

Here six sat in the sun for a while before heading off home with the wind still behind most.

Despite a lively breeze, the improving weather produced a fine crop of riders; many on a sportive (Staple Lane, Ranmore Common and much later Box Hill). Our group at Tillings was more select, just six (Pete B, Bob, David, Janice, Paul, and the author). What - no bacon sandwiches! 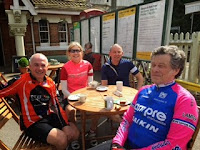 For Paul there was a family affair. The three whippets rode by way of Peaslake and Winterfold and a left beside Cranleigh school so bypassing the village itself. Whereas Bob and I separately opted for something less strenuous (for me Shamley Green and the Downslink).  Lunch was at the Park Hatch (note the change of name). And boy has it changed - gone the gloom, the foliage, the enormous portions and much of the garden including that shed! No sandwiches, not much under a tenner,  so fewer visits in future?

With Bob Guildford bound, four sampled the emergent cycle path between Cranleigh and Ewhurst where with time in hand, we checked out the "railway" house. After Walliswood, we added Friday Street (Ockley) and Vann Lake. By Capel they were still too quick for me so the Pilgrim Cycles rendezvous was reached via Newdigate (them), Holmwoods (me). It was warm enough to an alfresco tea where I was shocked to learn that none had heard of Nick Drake. 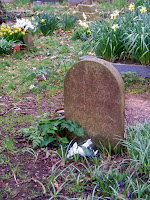 We'd not been in snapping mood so here's his (and his parents') gravestone taken on the 2005 Easter tour to Warwick and a sample of his music:

About 60 miles door to door.
Posted by RaasayWarden at 07:42 No comments:


3rd May: Joint ride with South-West London CTC. A very wet start to the day, perhaps no surprise that only four  at the Holmer Green start – John and Sue I. plus Jack and JC; we were decidedly damp before we even reached Beaconsfield, John I. was wringing out his waterproof gloves and John C had modified the route to avoid the puddle-filled, muddy lanes.

Even the bluebells looked droopy and forlorn  and it was an early arrival at the cafe in Burnham Beeches, still raining but not so heavy; coffee; more glove-wringing and then we welcomed Ken Bailey, Mac Crombie and David Winterburn, but we were even more pleased to see a line of cyclists coming up the path to the cafe. Nine riders from S-W London (covers an area from Richmond to Sutton, Cheam to Kingston-on-Thames) had met at Hampton Court , ridden via Feltham and Datchett to arrive at precisely 11.00 despite the rain. It was great to see Tony, Pam, Caroline and the others; more coffee and social chat. Some of us knew each other from CTC holidays or the 2014 Golden Beeches, when the arrangements for today’s joint ride had been made.

John & Sue, Mac and David had other commitments, so just three South Bucks and eight visitors departed for lunch at Aston. The weather forecasters had predicted the rain would stop late morning and so it did, as we left the cafe to pursue a route past Dropmore, Cliveden, Bourne End to Cookham Bridge. Cookham had some sort of Bank Holiday Arts-Fest with decorated streets and the Stanley Spencer Gallery open, but we had no time to stop, except to divest ourselves of damp tops as we pressed on to Winter Hill, down the zigzags into Marlow. We had intended to use the lanes through Bisham and Hurley, but the thought of more mud and puddles led to a change of plan and we rode past the Leisure Centre en route for the Hambleden Weir crossing. The Thames was in full spate and two canoeists were having great fun paddling against the surge. Onto lunch at the Flowerpot, sitting outside in full sun.

After lunch, the pace slowed to enable one of our visitors to catch up after a puncture; the route took us  past  Knowl Hill, White Waltham, Holyport and Bray to afternoon tea at Dorney Court, after which we went our separate ways. Home at 6.00, escaping some very heavy showers. A grand day out and many thanks to Tony Hopkins and his colleagues from South West London CTC

John Capell
Posted by Tony at 22:42 No comments:

For a change the weather forecast was spot on. Arriving at Hampton Court in a light drizzle just 2 were waiting but by the time to depart numbers had swollen. After setting off only a few miles were covered before we stopped to don waterproofs as the drizzle had turned to rain which continued on and off to 11's.

Just after Bedfont Neal was spotted about 400 metres ahead and we hauled him in and onto Colnbrook where we picked up Pam. I had planned the route to 11's direct as possible and so this meant many roads uncycled by most of the group.

Arriving at 11's, Burham Beeches, we met South Bucks CTC already tucking into coffee and cake. Sadly as the weather still looked like rain most of the South Bucks contingent were heading home leaving just 3, John, Jack and Ken. Just before setting off Vic arrived to swell our numbers. John Capell from South Bucks had agreed to lead and Ken was nominated as back marker.

With few hills and the rain easing off we went through Cookham and down the zigzag, Quarry Wood Road, to Marlow for a comfort break. The onto the Henley to Mill end and across Hambleden weir where some very enthusiastic canoeists were performing stunts in the weir and then to lunch at the Flower pot Aston.

By now the Sun had come out and we all had our lunch in in the garden. The South Bucks group were keen to also join us for afternoon tea at Windsor farm shop. Just after lunch Neal punctured and told us to go on. On reaching White Waltham Ken had to leave us for his journey home.

As time was not on our side we decided to change venues to the nearer Dorney court GC for our tea. Just as we were about to sit down Neal arrived to join us. After saying our goodbyes to John and Jack we headed off in the direction of Staines and home.

Thanks to the 9 C&M who braved the Weather early on. It was great to hook up with South Bucks and a shame that the weather had kept many away. Many thanks to John Capell for leading a lovely ride and hopefully we can reciprocate a more Southerly route. 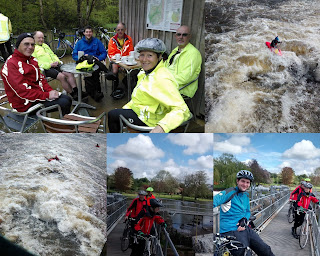