While we were at Alton station 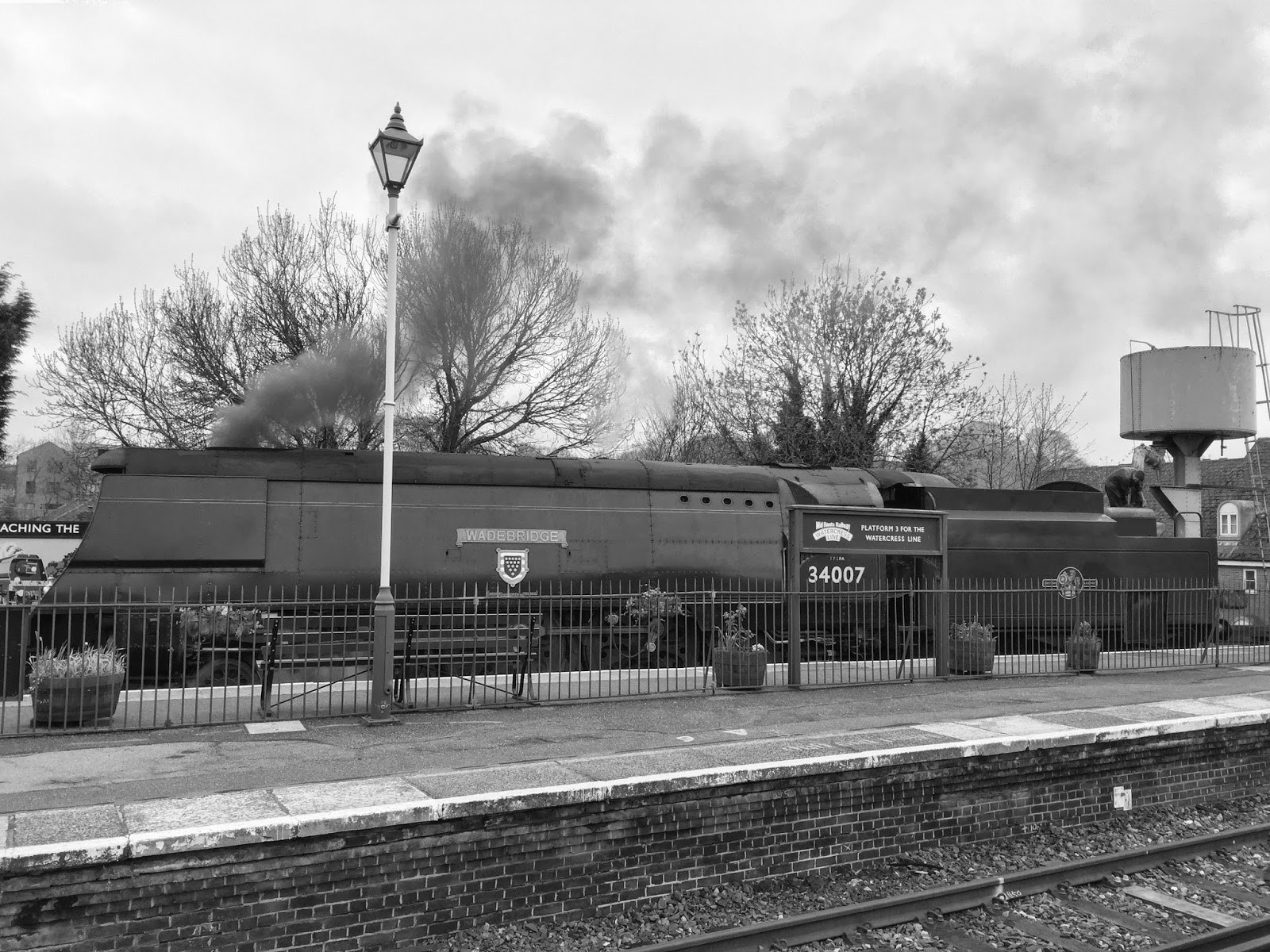 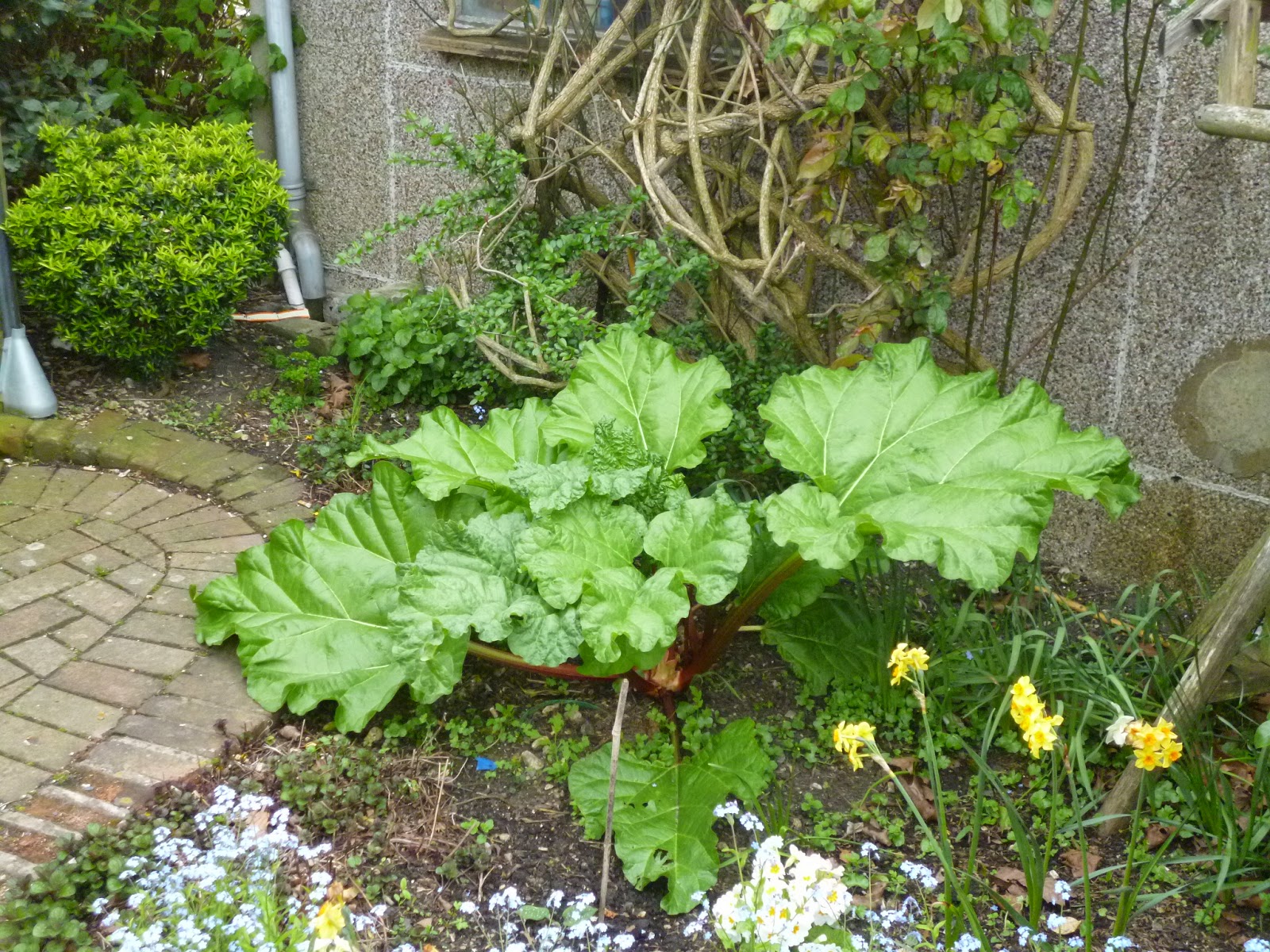 As well as the hot, smelly, smoky, polluting (but wonderful!) unrebuilt West Country steam loco at Alton station, we also had ample time to study ALFI's efforts (Alton Local Food Initiative), one of which was this magnificent rhubarb crown. This led to a fascinating detailed description of rhubarb preparation and avoidance of possible pitfalls (thanks, Graham) - the general consensus was that rhubarb is best consumed in a crumble, accompanied by lashings of custard. 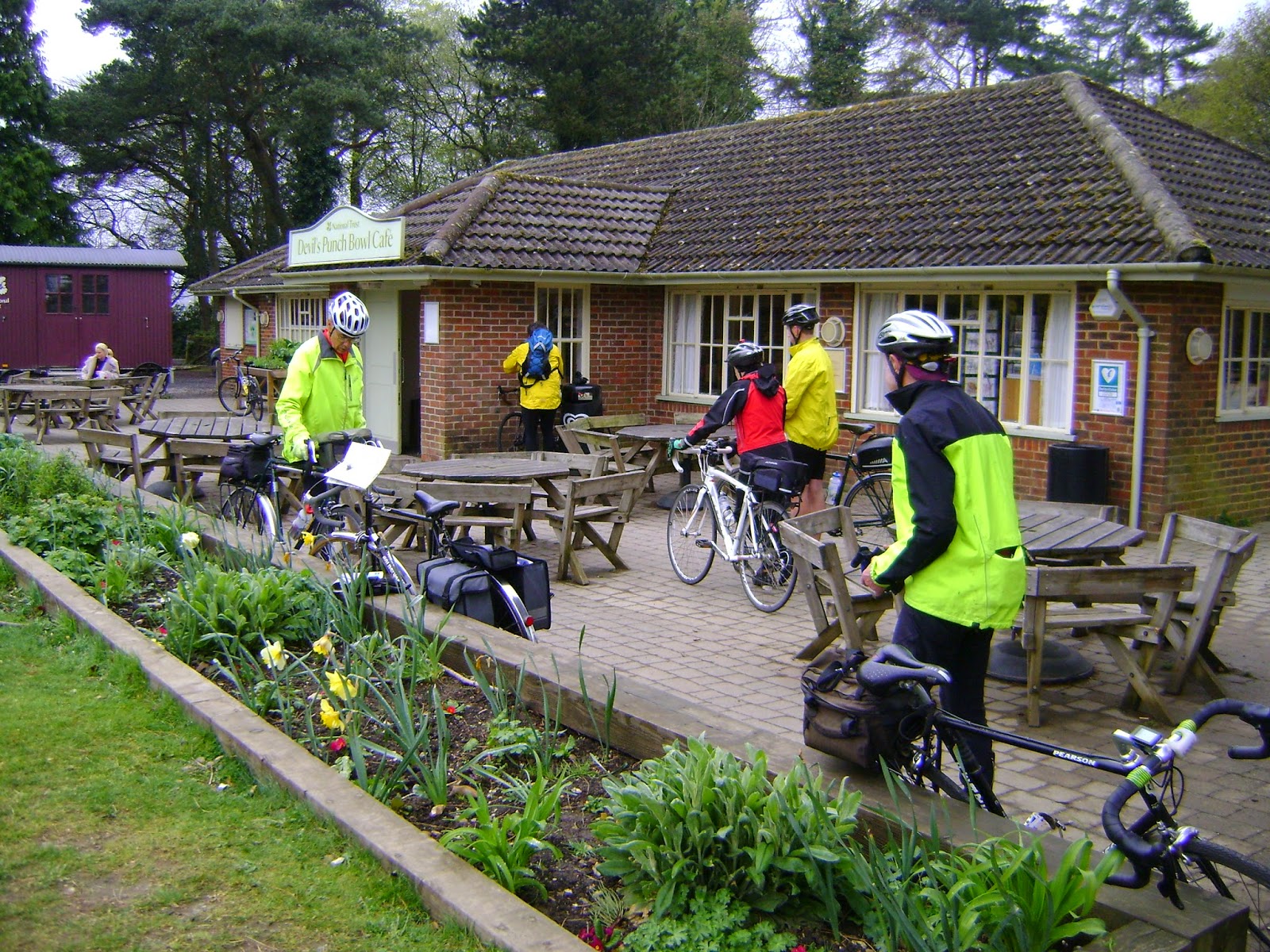 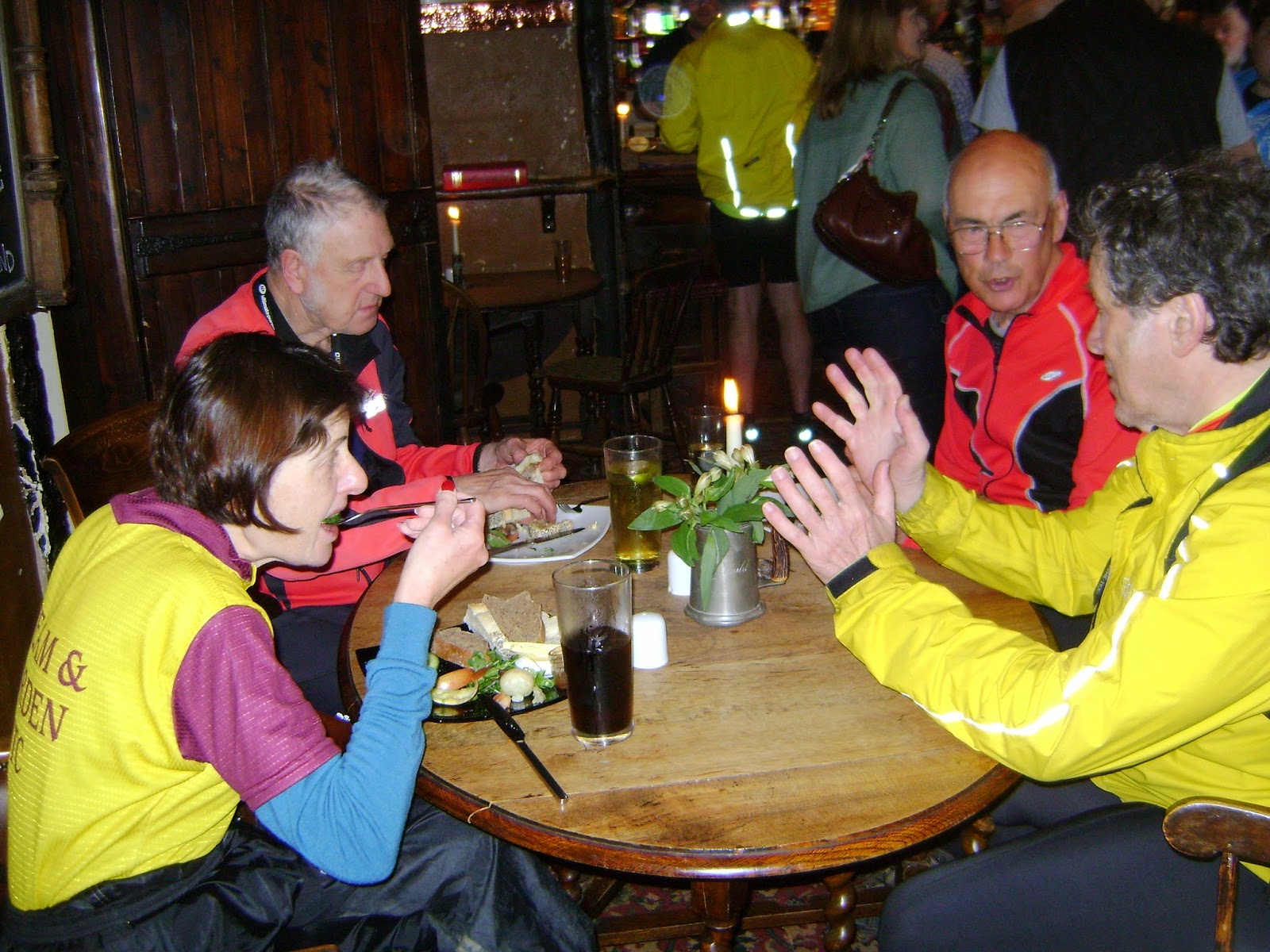 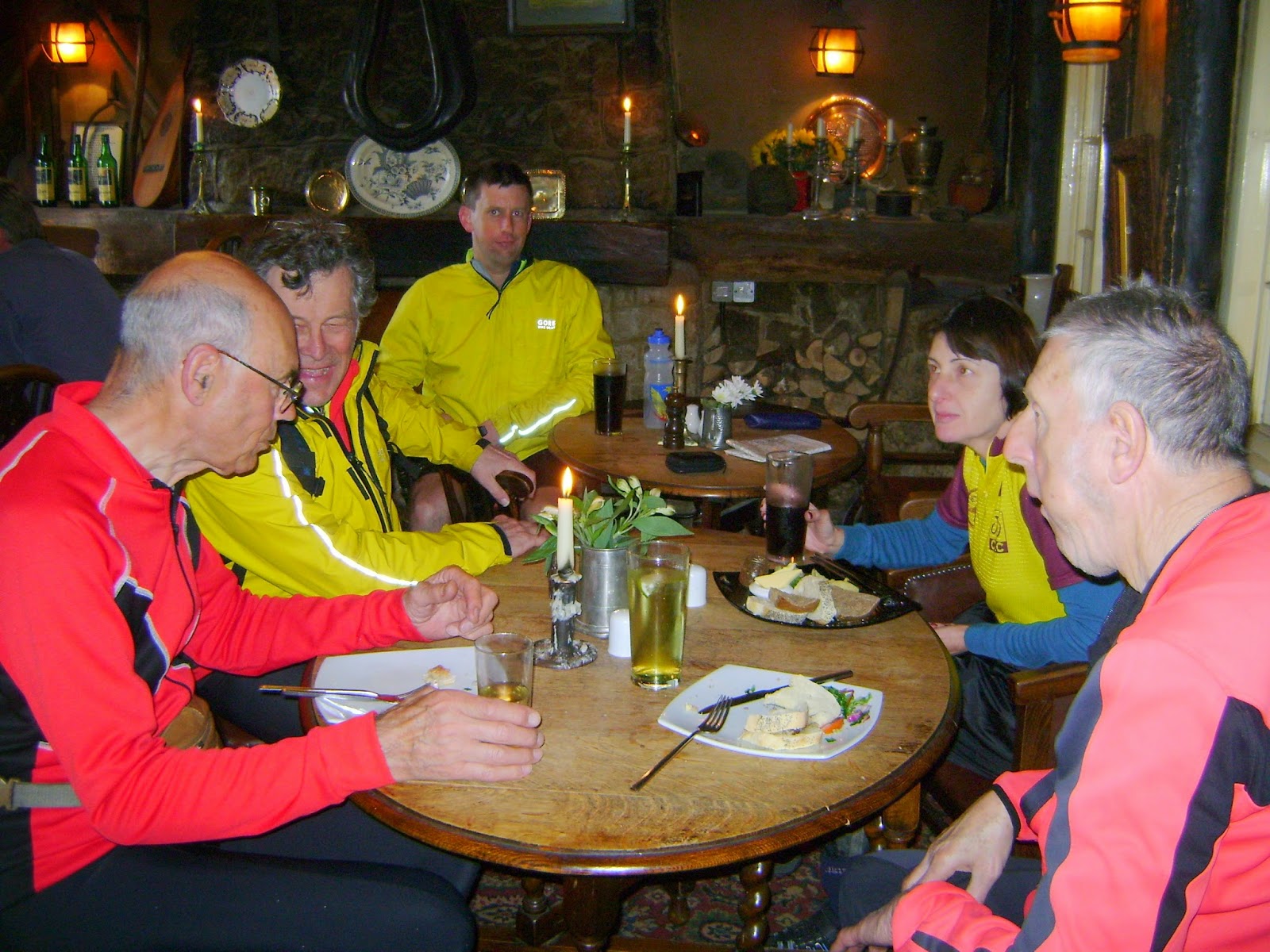 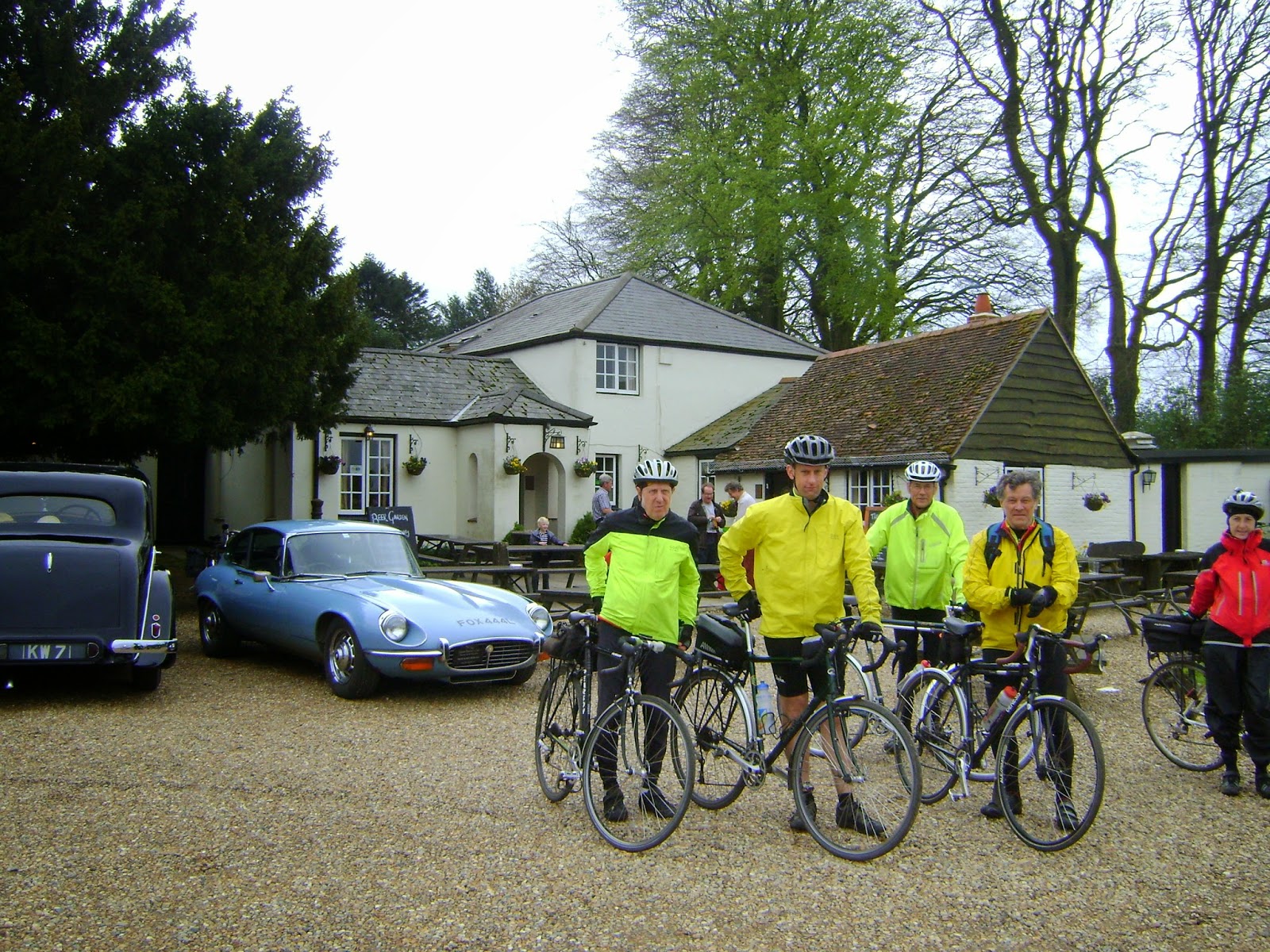 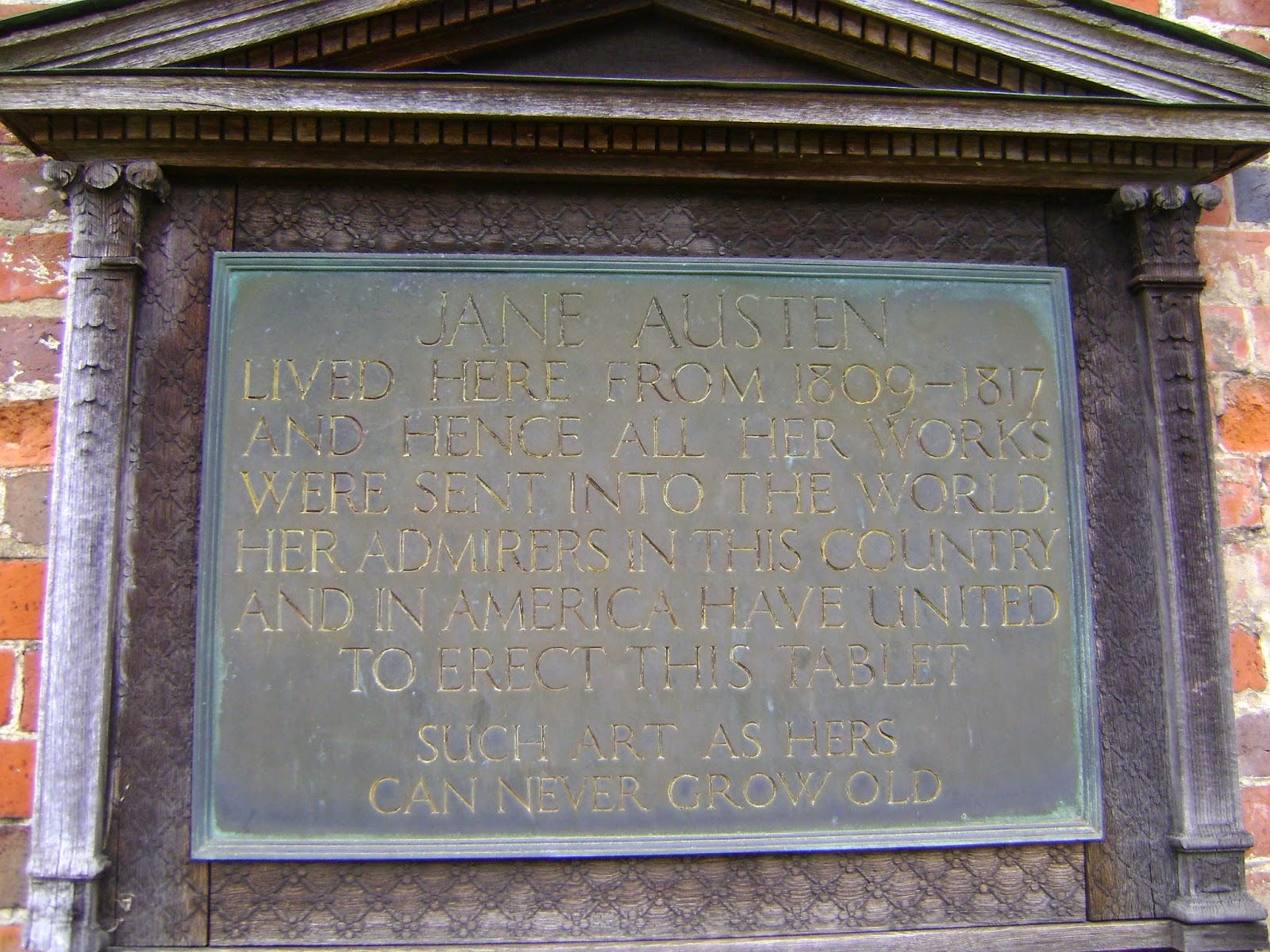 There was some confusion when arriving on the station concourse,because our train wasn't shown on the dot matrix information boards.
With the time ticking away,our train appeared as a "change of platform" announcement and we were soon on our way.........the 9.30am Surbiton to Bentley.
Terry joined us at Aldershot and a bit before 10.30am we were riding the quiet lanes to elevenses.
Not wanting to travel on the same road twice, I opted to go via Dockenfield,Frensham & Rushmoor then south to Hindhead on a long drag which seemed to go on forever.
That costly error of judgement was to creep up and bite me later in the day.
Paul having ridden down was about to give up hope when we eventually arrived at the NT cafe,Devils Punchbowl.
Naturally I was keen to keep it short and we were away at 12.20pm.
I'd phoned the pub with an order of food and was sure we'd be there at around 1.30pm.
We headed west to Whitehill on largely flatish roads until a climb past Bradshott Hall was to signify a change in terrain.
A fast descent through Empshott then a succession of three climbs one after the other slowed us considerably.
We were just west of Hawkley and approaching "The Pub With No Name",Priors Dean...........it was 2.10pm.
After taking lunch alfresco,I ventured into the pub to join Lilian,Terry & Ed.
Then began alot of head scratching.
It was clear to both Graham and myself that tea was quite possibly unachievable and the route in the afternoon didn't apppear to offer any easy options.
Trying to think quickly, I decided that we would head north to Alton along the main road and catch the train from there.
But not before taking tea at Jane Austen's House,Chawton.
As we chatted on the train homeward bound,reflecting on the day,I was satisfied that we'd had fun riding along beautifully quiet lanes in a picturesque part of Hampshire.
The weather could of been better, a cool overcast day but the train ride went without a hitch.
And Graham & myself have lots of ideas for future rides using the train.
So why not join us? 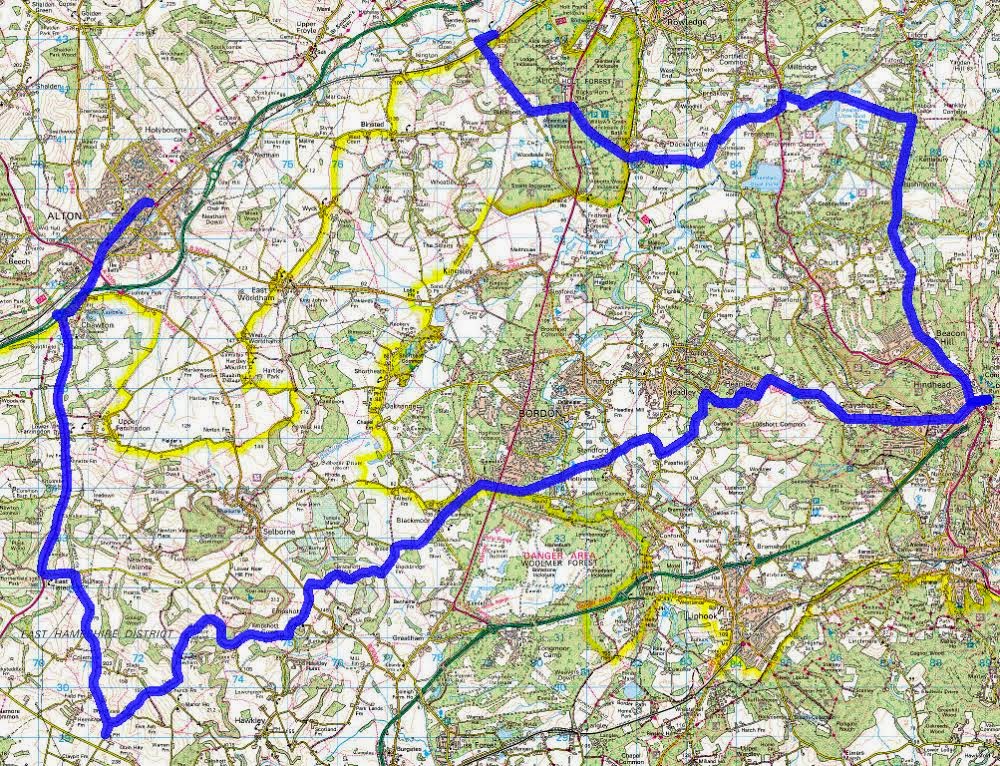 Posted by Tartan Socks(long) at 18:52 No comments: 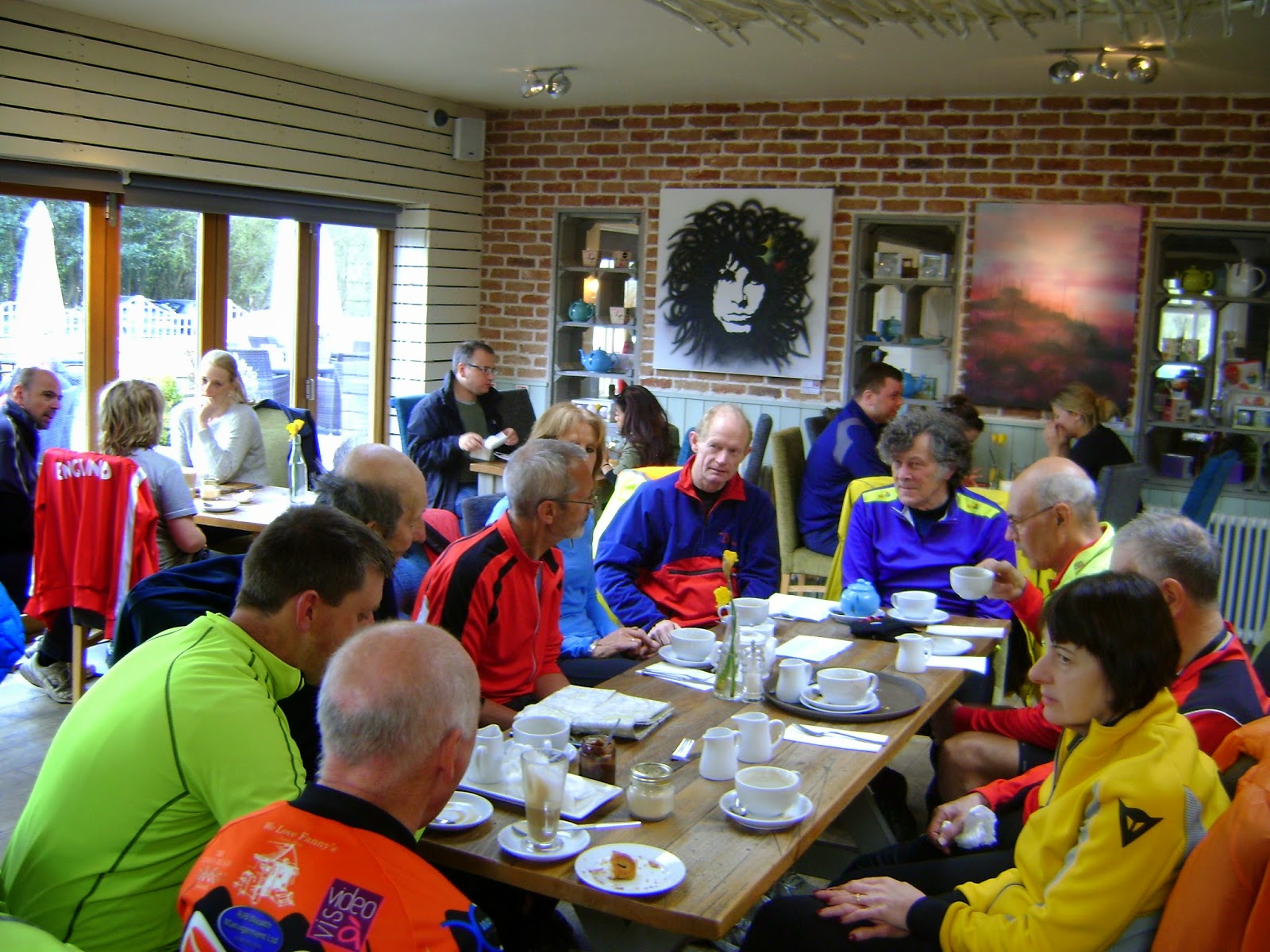 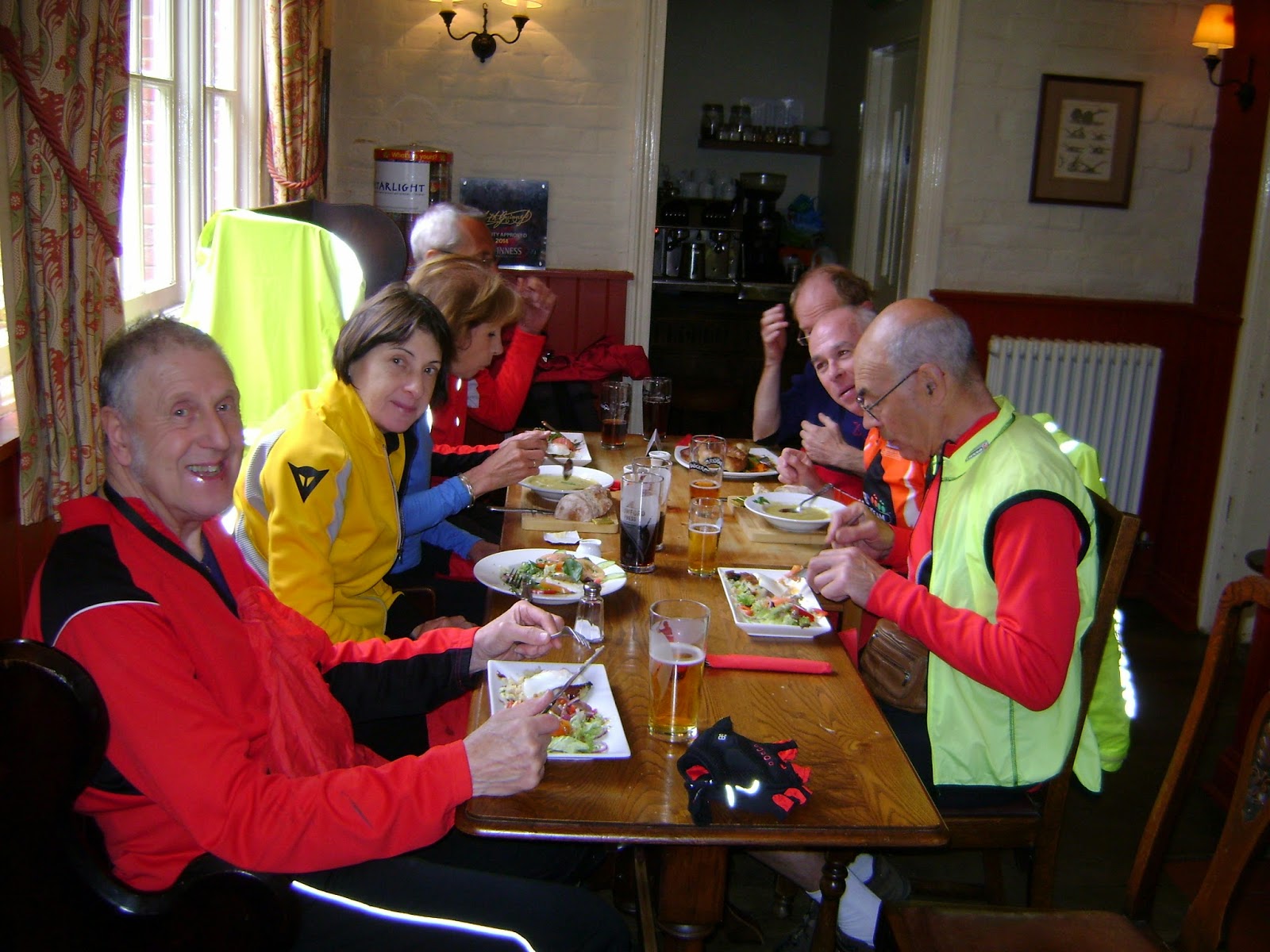 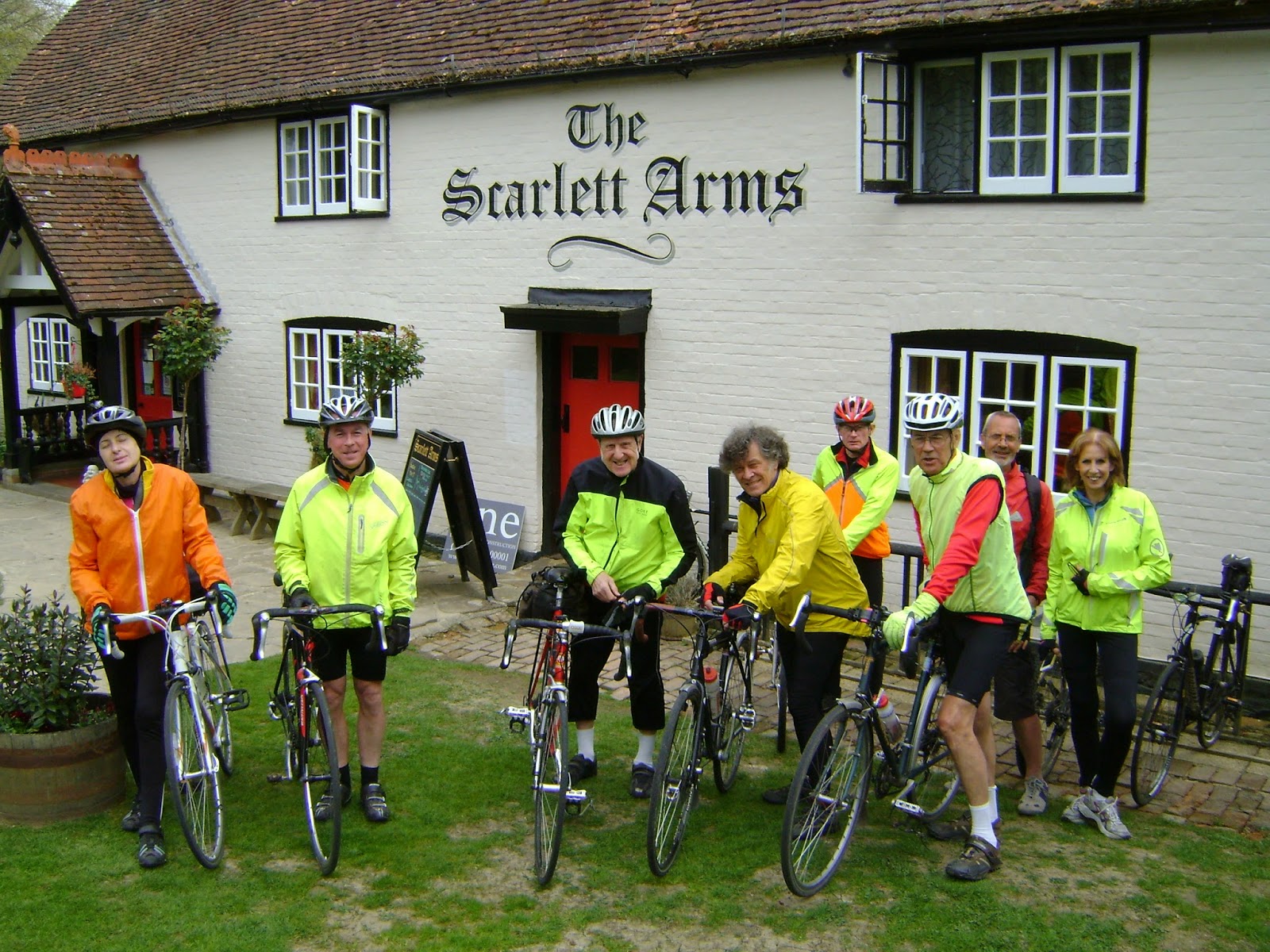 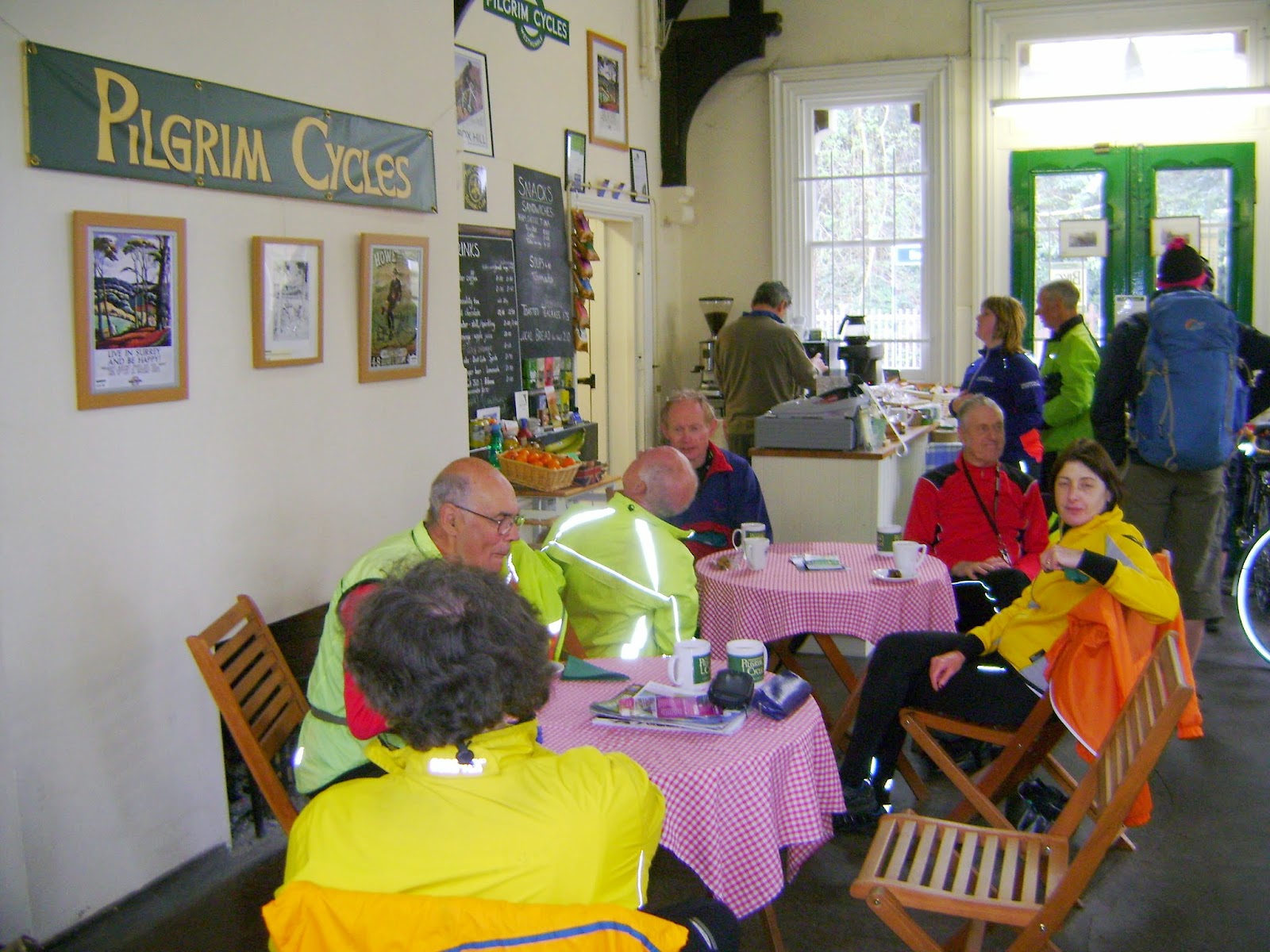 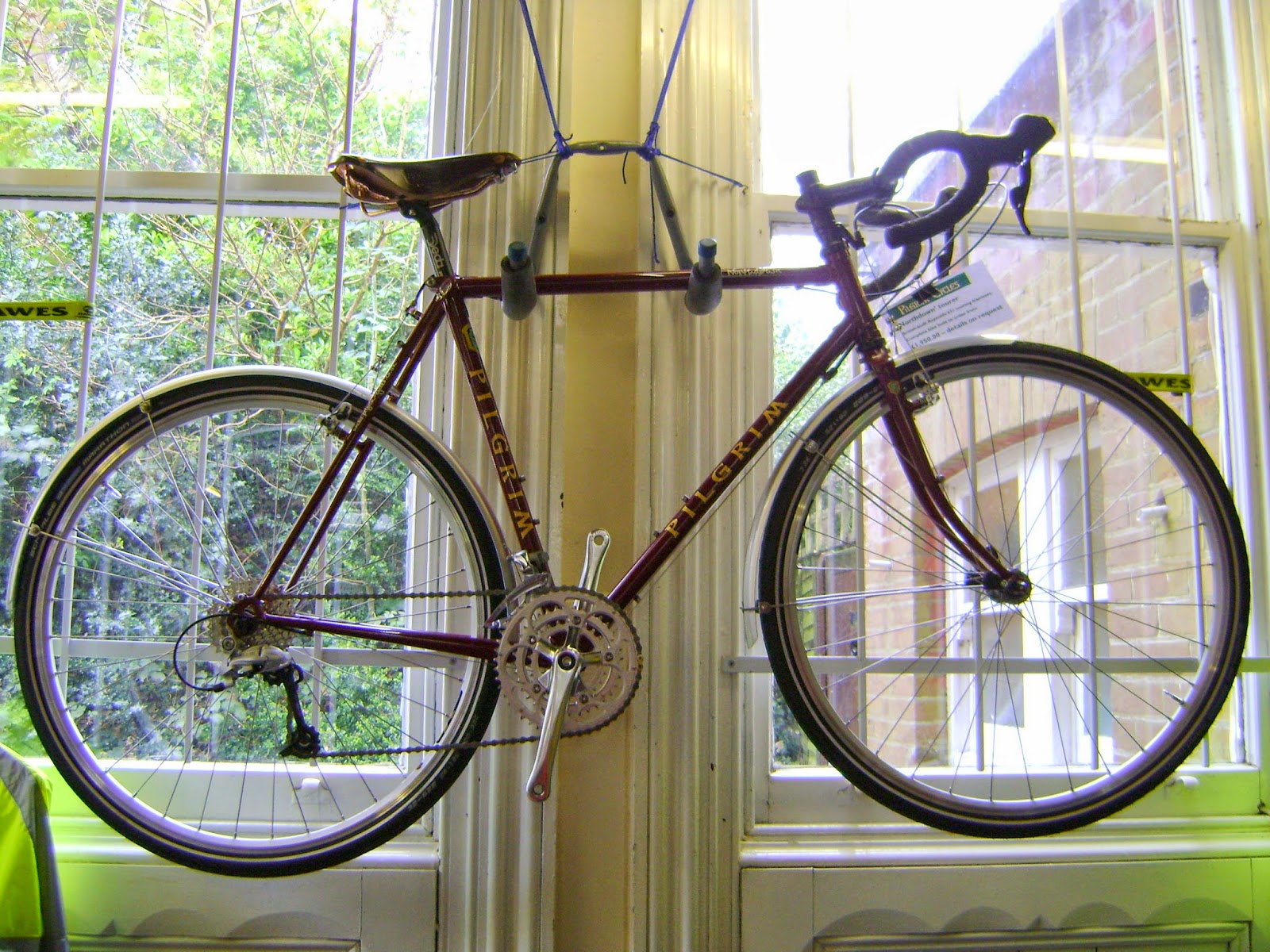 Posted by Tartan Socks(long) at 18:32 No comments:

As I arrived at The Jolly Farmers in Buckland I was greeted by a host of bikes lined up by the fence and more by the door. Worries about cycling alone were dispelled.

Inside the gathering throng had commandeered the largest table and were stoking up for the journey ahead. Pam, Irene and Alan arrived for a rare visit this far east but I failed to convince them all that my ride was short and flat. So they tarried, along with those with family duties, while nine of us set off towards Walliswood.

We headed west on the A25 briefly before turning left at Buckland church towards Betchworth. Sandy Lane brought us to Wonham Lane, Wonham Mill and south along Flanchford Road towards Leigh.

The roads were quiet, the sun was shining but there was still a chill to the wind.

Through Leigh we headed for Newdigate, approaching the church via Hogspudding Lane and Old School Lane. Kingsland, Trig Street and Misbrooks Green Road led us to Capel. Across the A24, and past Ockley Station we reached Weare Street.

Notwithstanding the road surface, this is a delightful lane and we stopped by the pond to visit the geese. However they seemed less than pleased to see us and we soon beat a hasty departure before blood was spilt.

Crossing the A29 and through Oakwoodhill we arrived at The Scarlett Arms in Walliswood just before 1.00.

Some used the rustic wooden bicycle rack while others thought better of it and made other arrangements. Inside a large table had been reserved for us in the back room. Most chose from the Starters section of the menu with "Bubble and Squeak with Smoked Salmon and a Fried Egg" a popular choice. I pushed the boat out and went for the full Sunday Roast Lamb.

Leaving about 2.20 we headed north to Forest Green and towards Holmbury St Mary. Andy wanted to ascend Tanhurst Lane to Coldharbour but couldn't find much support so we continued the gentler climb to Holmbury SM. Up Pasture Wood Road and down Hollow Lane brought us back to the A25.

This appeared a little bit quieter than usual but at the bottom of Coast Hill we turned into Balchins Lane to follow the cycle path around the back of Westcott. Briefly back onto the busy roads of Dorking, but with one final detour led by Terry where we cut across the railway and the vineyard to arrive at Pilgrim Cycles for tea.

A sunny spring ride in good company. Thanks for joining me.
Posted by Neil C at 22:46 No comments:

Here are some of my photos from my day off the bike in Sherborne. 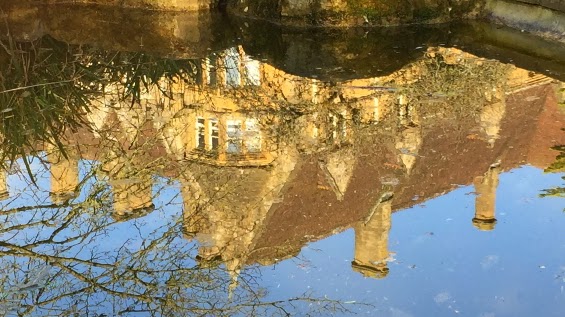 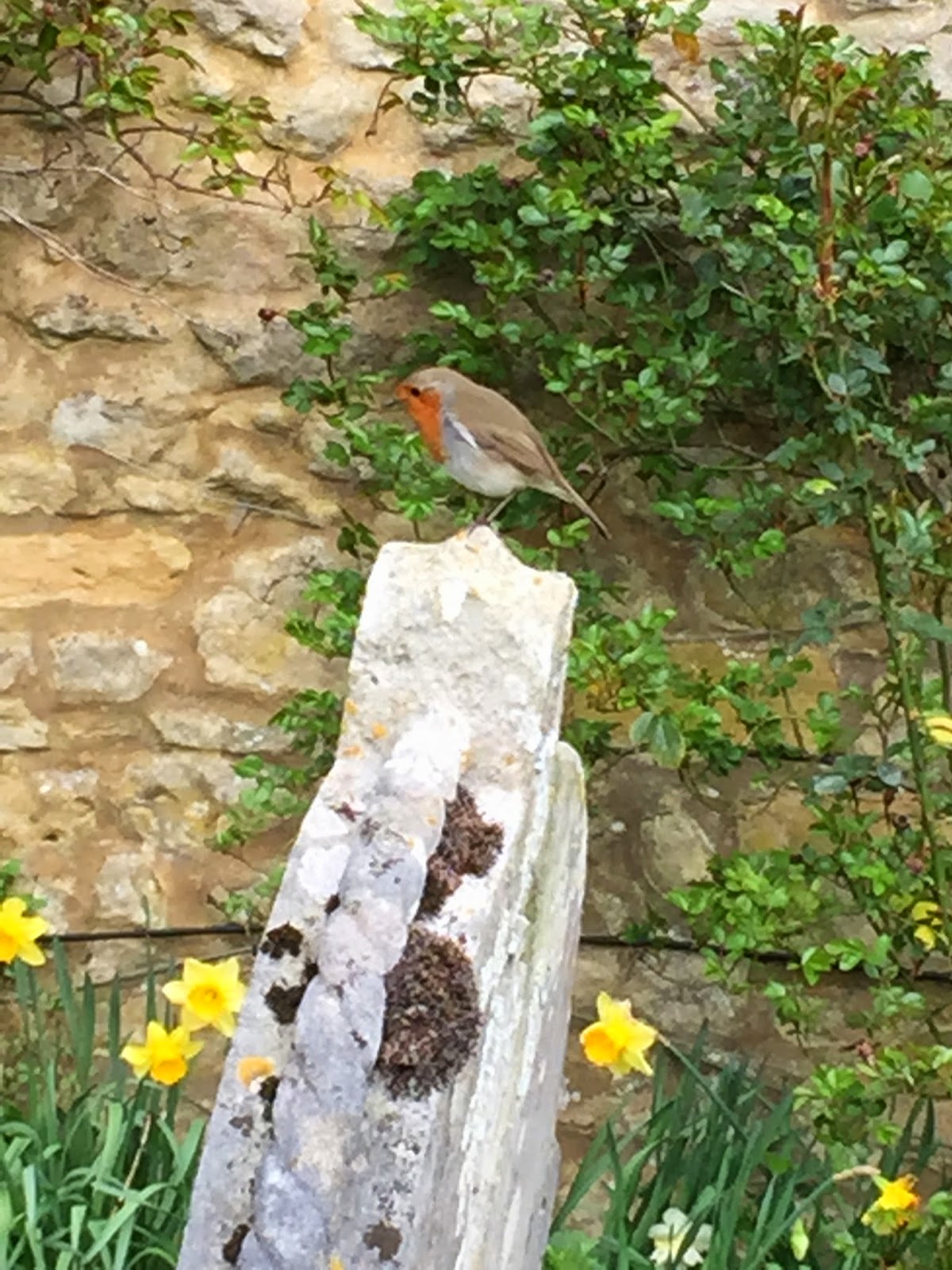 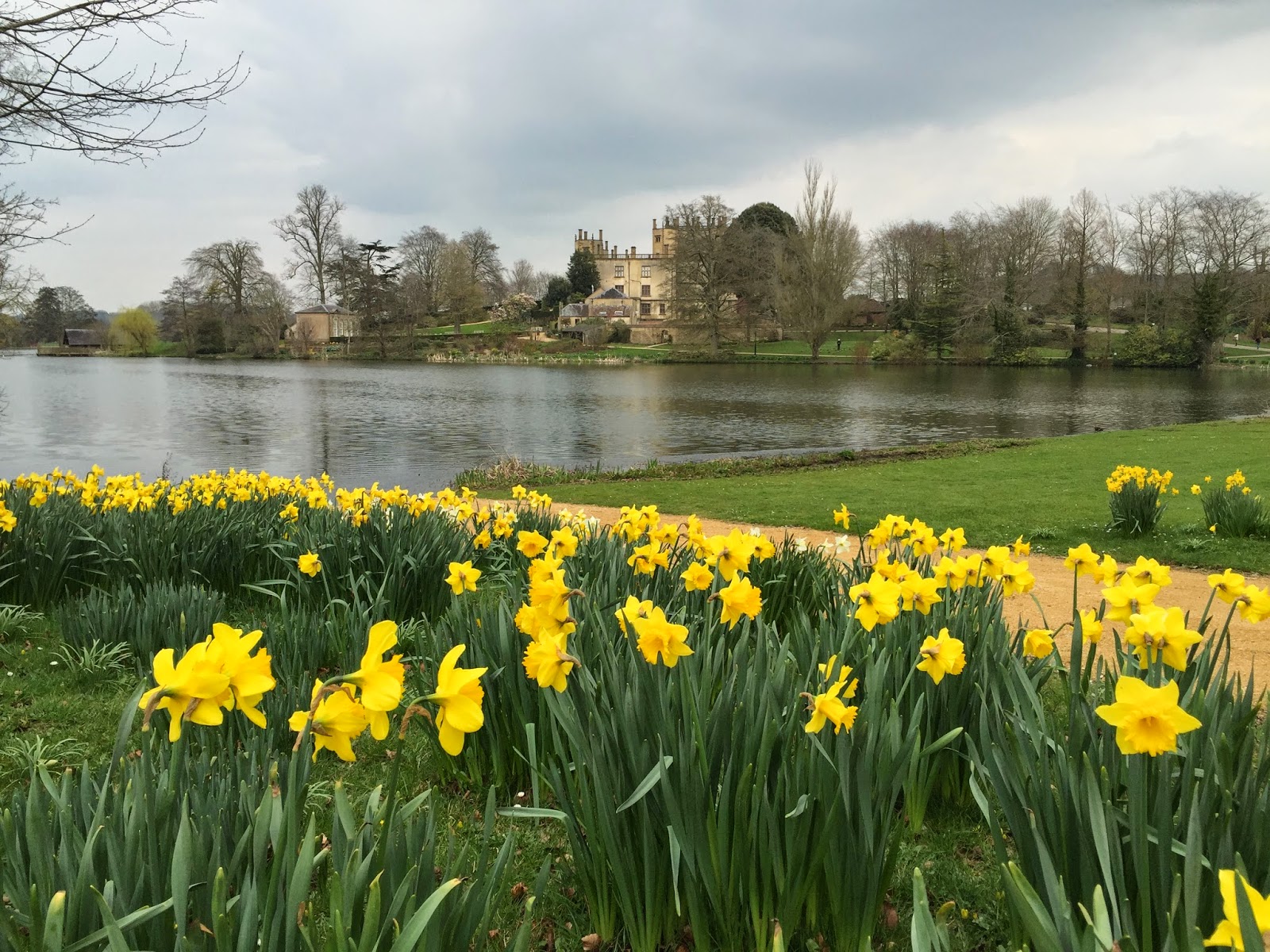 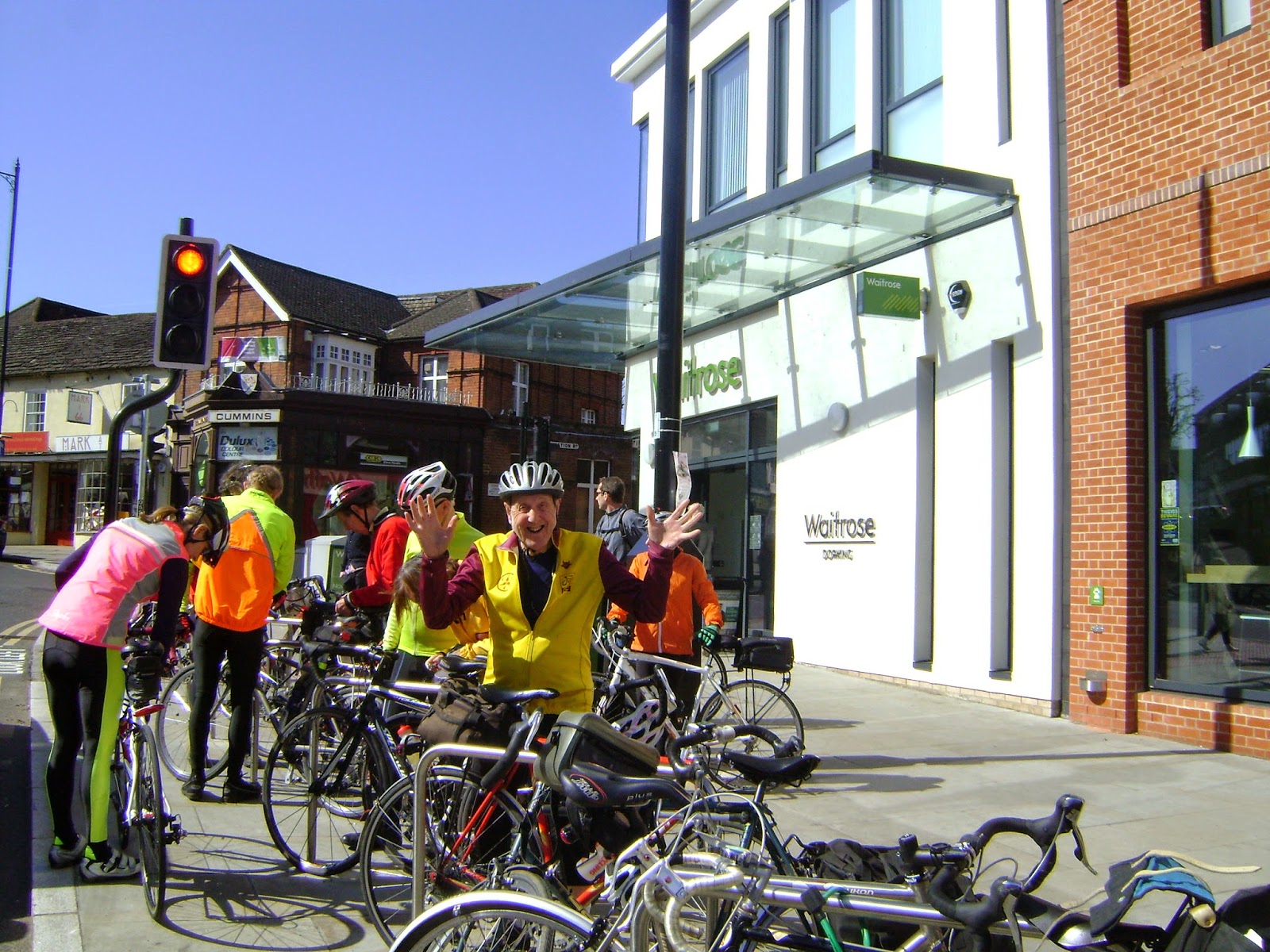 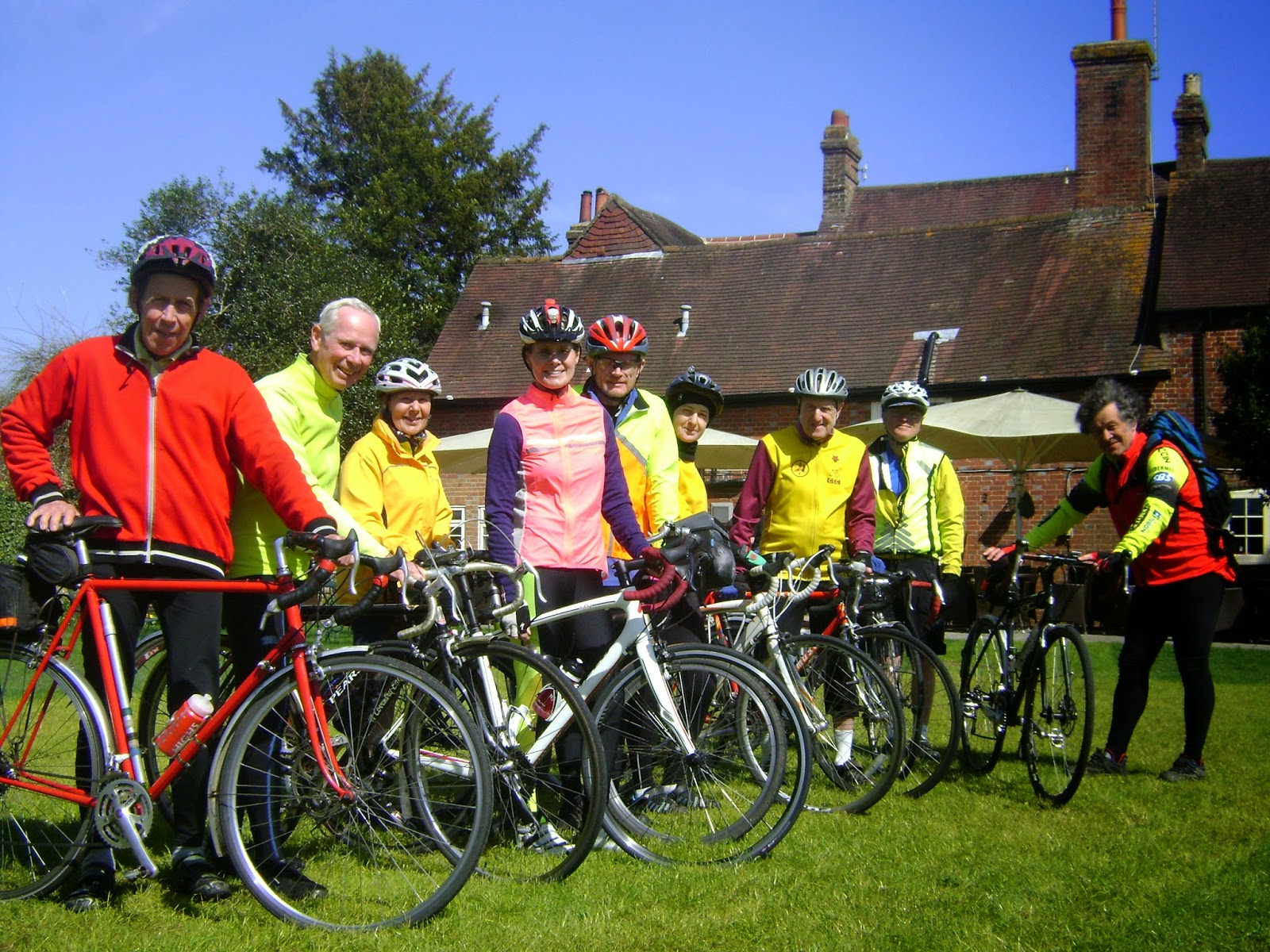 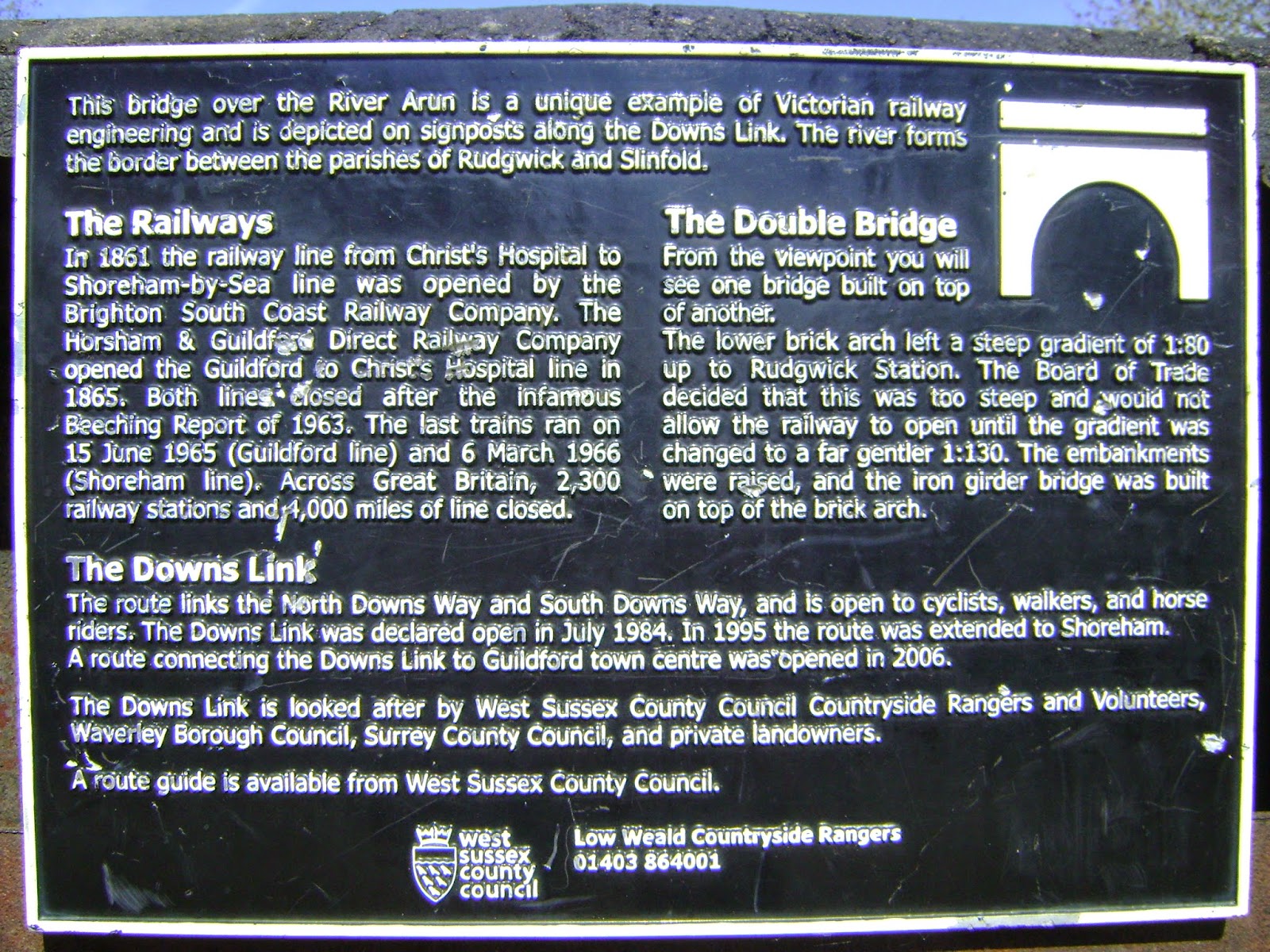 Having missed my ride a couple of weeks ago I found myself leading today so Terry could be with his unwell wife..........get well soon Sally.
11's at this new Waitrose in Dorking ticked all the boxes,especially for "MyWaitrose" card holders.........did you know you can pay 20p and upgrade to a large drink?
I decided the climb to Coldharbour was worth the effort so we could use the delightful Mole Street to Walliswood.
Pleasant lanes brought us to the A281,a busy road that links Horsham with Guildford.
Past "Stooks" cafe at Newbridge Garden Centre where a considerable number of new housing and roads was evident.
The Red Lyon at Slinfold was reached at 13.02.
We all dined outside in the sunny but breezy conditions.
On the return,the ride split at Ellens Green with Graham's crowd heading back to Dorking via Henfold (tea) and I led to Ewhurst where Ken left us at Moon Hall road and we turned right past the Duke of Kent school to avoid a significant climb.
Before long Janice & myself had gone through Peaslake and we took tea at Gomshall (Tillings) before the climb home.
Home just after 5pm.

Cloudless skies and a moderate southwesterly which blew us home in record time.........Gomshall to Epsom in an hour!

Just a reminder that this Saturday (18th) is the Ripley Jumble.
Posted by Tartan Socks(long) at 18:50 1 comment: 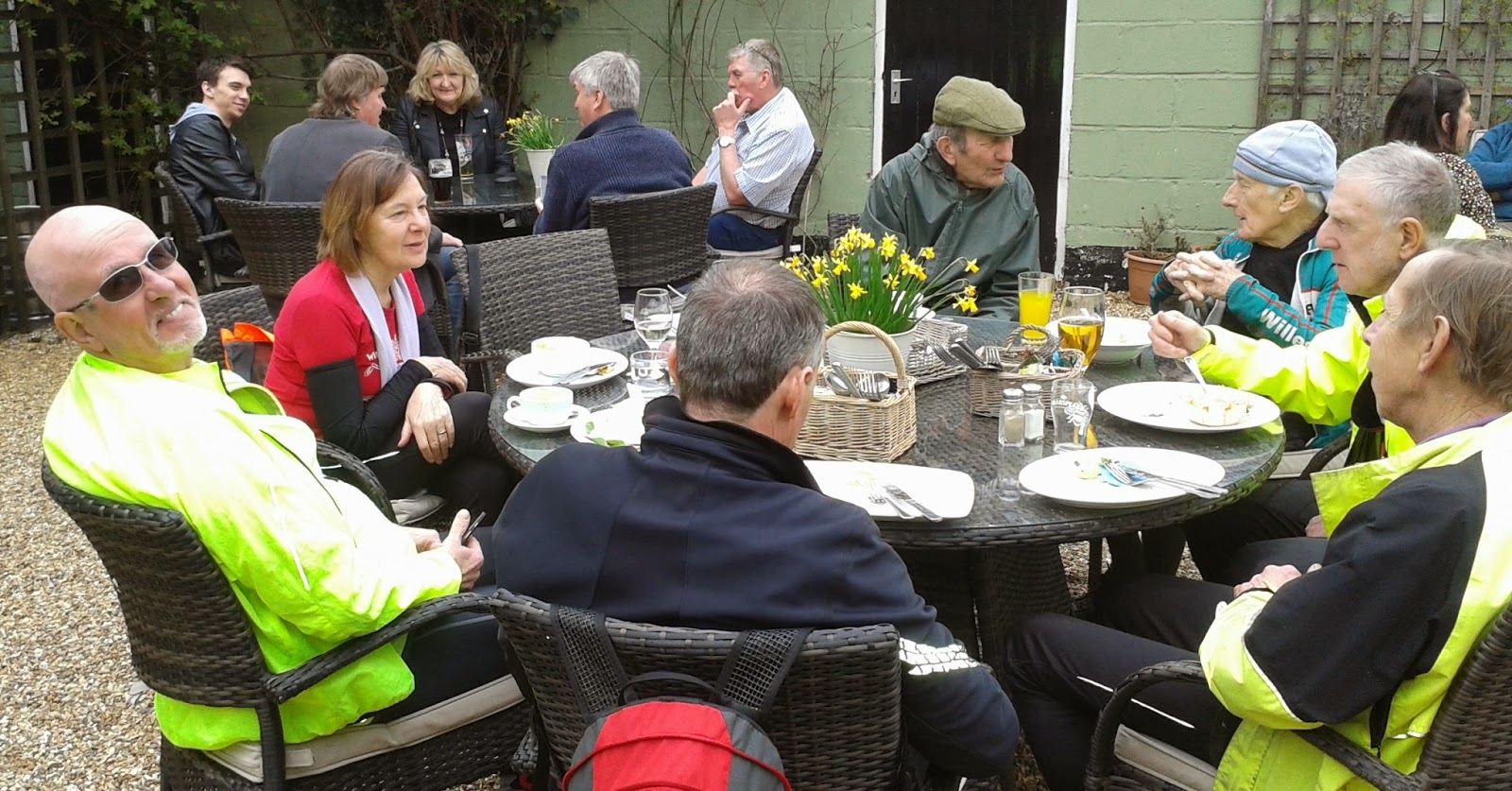 Warm enough to dine outside + no room inside!

Dave assembled his troops at Hampton Court, though I first saw his platoon at Dorney Court, where morning tea was served in a marquee. Several layers were peeled off before we set off in warm sunshine for the morning's yomp to Littleworth Common. Pleasant lanes led us upward between Taplow and Burnham to our well hidden lunchtime venue of the Blackwood Arms; fully booked inside but with space outside. On leaving we fortunately had no need for the emergency ambulance in attendance. Our return was through Burnham Beeches to by-pass Slough for an early tea at the Liquid Leisure water sports centre in Wraysbury. Soon after resuming our return journey, a red traffic light alerted me  that I had left my shoulder bag at the tea stop. I therefore bade farewell to the group, returned to recover my impedimenta and then head homeward, where the Cateye recorded a round trip of 78 miles. Our thanks to Dave for a most enjoyable ride.
Jeff
Posted by Jeff at 13:59 No comments: 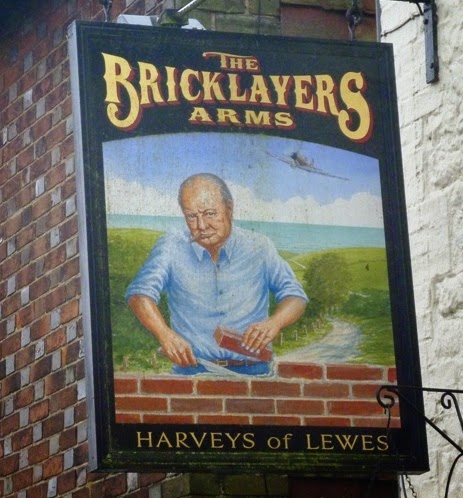 I gather his rates are quite reasonable

The tea leaves for Sunday were not promising; our leader Andy had been stricken by the 'flu and the skies were leaden. The prospect of wind, rain and Kent had discouraged all but the hardy, if not foolhardy. Ken and Paul Day were duly in attendance at the Carshalton War Memorial. We headed East to S. Croydon, up to Addington and along Lodge Lane to our old familiar friend, Saltbox Hill. Biggin Hill airport and the A233 soon took us to Waitrose for a nourishing bacon roll and cup of tea on the house.


With drizzle in the air it was back to Jail Lane for another climb to Cudham, Shelley's Lane and Knockholt. Our reward was downhill via Starhill Road to Chevening and the Bricklayer's Arms in Chipstead. All tables were booked and we were not expected, but a table was found with a later reservation. Beef baguettes and chunky roast potatoes were more than adequate.


We left before 1.30pm to face a murky afternoon and decided to bypass tea. We headed for Sundridge Hill but turned West along the Pilgrim's Way to Tatsfield, where we parted company; K&P aimed for Warlingham and I for Woldingham. This upset the Gods; the wind swelled and started to gust alarmingly. I know not if K&P were equally discomfited, but as I took to The Ridge, I was repeatedly blown to an obscenely cursing standstill by fierce squalls which persisted through Woldingham, Caterham on the Hill, Chaldon and Farthing Down. It was a relief to arrive home unbroken, as I hope did Ken and Paul. My thanks to them for their enjoyable company and support.