It was one of those days - one thing led to another so instead of North Cheam, I steered for Reigate via 'The Gap'. My speedo was on its last legs - mph OK but mileage resetting after every 0.04 to 0.006 miles! Spying three red tops ahead, I accelerated and caught first Ed, then Keith and finally Simon in Slipshatch Road. This show of speed was my undoing, as I turned right (rather than left) into Sandcross Lane. Fortunately nobody noticed before I did. Bob was there and shortly Daphne, Pete and Deanna too joined us. Ed's been badly affected by this weather and opted for home so I replaced him as leader.

Off we went down Lonesome Lane into Horley, then east across the A23 into Langshott and so to Smallfields. Here Simon spied a fleeing MTB rider and set off in hot pursuit followed by the rest of us. The quarry turned for Horne (my intended route) but asserting my authority I shouted "Straight on" and on we went past the golf course. The mile of A22 is downhill into Blindley Heath where we turned for Crowhurst Lane End, Crowhurst and the Royal Oak Staffhurst Wood - about 18 miles. I had last visited on a Brian ride - hills aplenty, sewage works, mud. I recalled "restaurant" not "pub" but the garden was perfect. Without approaching recent dizzy temperatures, heads still nodded as we set the world to rights (cyclewise) and decided what's next.

"Tatsfield's up a b*****y great hill" I proclaimed so Warlingham GC became the revised target. To Tandridge we rode then the splendidly named and narrow Jackass Lane, Gangers Hill (a wee bit) and the School. For reasons unknown Keith selected the corrugated bridleway rather than NCN21 but we were soon there. Cakes were devoured but scarcely earned after only 10 miles. Next came Purley where there was the parting of the ways.
Posted by Anonymous at 21:25 No comments:

A beautiful if rather hot day when traditionally the number of riders on our roads increase with the start of the TDF.
The climb from Effingham towards Shere was afforded with welcome shade by the beech trees that line the road. Several fast men overtook me with aims to get home before the heat of the day ............ and to watch the Tour.
13 of us at "The Lucky Duck" where £1.60 gets you a pot. Leader Simon informed us of his involvement with the 2012 Olympics and the planned? evacuation for spectators and competitors in the event of a terrorist alert.
Factor 30 was liberally applied and we set off for The Haven.
All the regulars plus John Mason, Terry Lowe, Pam Jones, Don Clarke & Roger Mace.
Pint of orange squash 60p but not much shade, one of those days when it's cooler inside.
Capel arrived via Rudgewick,Ellens Green & Weare Street. Cream tea under the churchyard tree, very pleasant.
Website of the week: www.bikecafe.net
Posted by Tartan Socks(long) at 22:21 No comments: 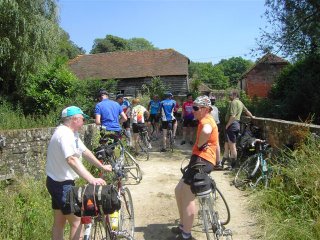 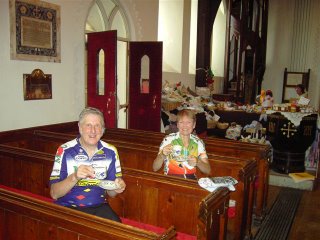 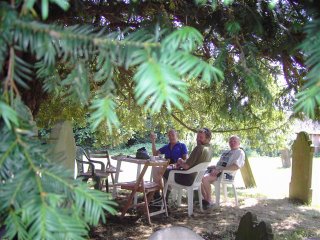 Pictures from Pam Jones
Posted by Pete at 18:32 No comments: