We will keep you posted about funeral arrangements and anything else relevant as soon as we know.

Our deepest sympathy and thoughts are with Bill and the family, 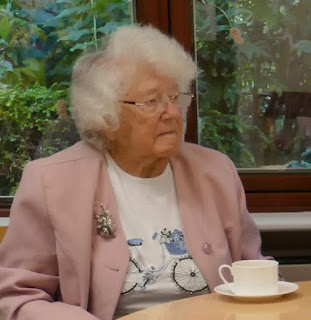 A lovely lady, always had a smile and a joke.

As it was new years eve the plan was for just 11's at the Golden cafe Adlestone. Dave, Done and Bob were already seated when I arrived. Graham, Irene and Pam, Alan and Vic arrived around 11 as did Terry and eventually Ray. Big discussion as to the possibility of going on to lunch somewhere and a split decision was reached. Dave, Don, Alan, Graham and Bob headed home, Vic and Terry opted for the Saddlers arms at Send and Pam, Irene, Ray and myself headed  for Windsor and the Windlesora for lunch with Pam leading. 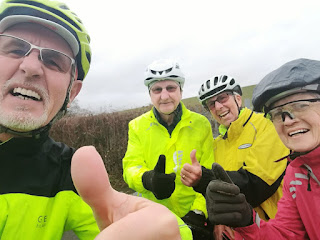 A pleasent lunch and off home via Datchet where I left the other 3 and headed towards Poyle. Just as I reached Harmondsworth the heavens opened and it was torrential for the next 5 miles, like riding along a stream!  It eased off just before I reached home but by then water ingress was nearly total, Still it meant I reached my mileage goal. A Happy new year to all and safe cycling in 2018.


Now is the time to check your current mileage and decide how many miles you would like to add before the witching hour of 11.59.59pm on Sunday 31 December 2017. The qualifying period is unsurprisingly from 1 January to 31 December 2017. However modest your mileage may be, do not yourself be too modest, but please send it to me to populate our 2017 spreadsheet.
There is a 'mileage' tab on the MWW blog page that reveals all. The column for 2017 is waiting for your mileage. It can be revealing to see the annual ebb and flow of our cycling dynamics. Not only that, but there is a gong to be won for the lady and gentleman (if any), reporting the greatest annual mileage, as well as the greatest increase over the previous year's reported mileage.

Please send your mileages to: jeff.tollerman@lineone.net and then check that I have successfully recorded your mileage on the spreadsheet. You cannot record it yourself .

To all those that I have not recently seen, may I wish you a positively memorable and enjoyable cycling New Year.

The forecast was morning dull, afternoon dire so it served no purpose by booking. But I was surprised by our number (10) at Squires Holloway Hill. A decision had been made: Wetherspoons Woking.

Eight set off on an obvious route : Stonehill Road, Philpot Lane, past the rebuilt but not reopened Plough to Horsell Rise then jostling with Christmas traffic in Woking town centre. Unsurprisingly our arrival time was an early noon.

The rain (as forecast) came around 1230 so the second vote was to miss tea and return via Maybury, Sheerwater and Scotland Bridge. Ed and I tarried, accepting an invite to tea at the White House (New Haw). Home in light and heavy rain after a desultory 40 miles. Happy thought: next Sunday's sunset is later.

On Saturday night I fell asleep to a meteorological omen of an impending deluge and heavy snow. Vowing to ignore it, I awoke to the distant refrain of a carol from the Occident:


"Born a King on Twickenham's plain,
Cold I bring to freeze them again,
Rain forever, ceasing never,
Over them all to reign."

I opened the curtains and lo, the omen had come to pass. I closed the curtains, gave praise and fell into a deep, warm and blissful sleep.

Brightly shone the morning light
Though the frost was cruel
Forgot to set the alarm last night
What a silly foo-el.

David, Bob and Graham were waiting patiently at the Moat Garden centre near Epsom as I put on my warmest clothing and cycled at top speed against the wind to meet them.   When I arrived at 11.10, nearly melting, the assembled group had taken the sensible decision not to ride any further, so we sat and chatted for a bit and returned home.   I lingered a bit to cool down and was entertained by Epsom & Ewell Silver Band playing carols.   By this time it was snowing heavily - very Christmassy.

A mean dank day to start with; some what brighter in the afternoon.
I went to Staines to meet Alan and a new rider..neither appeared after 15 minutes so I continued to elevenses, calling  into  bike shop first.

Graham, Bob, Dave and Alan (yes..Alan) at one table and Bill and Margaret at another.  Then Tony (who had punctured on the way in)Terry and Vic arrived.

There was no rush to get going as the route was not much of a challenge. Five left with me for Windlesham, Dave, Graham, Tony, Vic and Terry who turned for home via Chobham after Staple Hill.

Our route was via Holmwood Park, Accomodation Rd., Longcross, Staple Hill, Chestnut Lane to Valley End. We were all curious as to what stage the bridge was at in Woodlands Lane,...still no access but looks as though it will not be long before it opens. So onwards into Rygrove, Church Road, Updown Hill and into The Sun for lunch where we received the usual good service and food and was on our way just after 1.30.   It was decided not to stop for tea during our lunch time chatter!
We turned left onto Chertsey Lane, then right into Highams Lane to Burrowhill. From there it was the well used route to Green Lane, Addlestone.

I turned off for Chertsey whilst t'others continued homeward bound.
My thanks to you chaps for coming out today,  to Tony for putting this on the blog..and Dave for the photo.
Cheers Pam 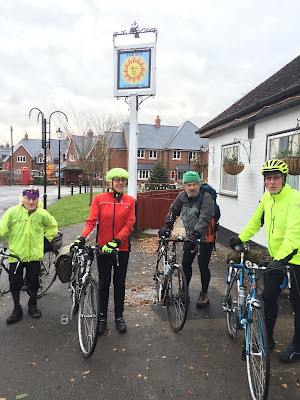 
Credit to Terry for the following.