It was dry when I left home but I had a headwind all the way to Leatherhead. On arrival Dave was already tucking into a cooked breakfast and Bob was enjoying a coffee. Vic arrived and just before we left the rain started. The lunch stop was undecided but we headed in the rough direction of Windlesham.

With the headwind and rain we eventually settled on the Saddlers Arms at Send Marsh with just 3 for lunch. Just coming into Send from up Woodhill from the London road at Burnt Common and Vic wanted to show us something, see photo. Lunch was served promptly and once we were ready to leave the rain started again but only briefly.

From here we headed towards West Byfleet where Dave left us to take the canal and Vic am I headed to Woodham where I left Vic and headed home with a very pleasant tailwind. A nice ride with some Sun. Thank you Dave. 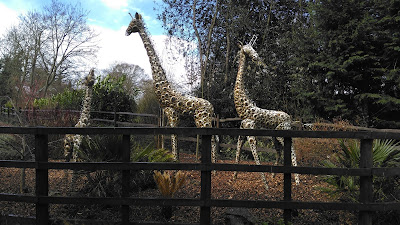 Not Fit For Purpose - see Tony's write up 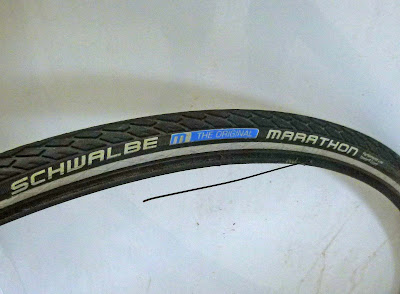 Posted by RaasayWarden at 08:16 No comments:

For me the official C&M 11's at Old Coulsdon is a 22 ride through the built up suburbs of London, not something I enjoy. So with a few others not wishing to venture that far or further an alternative ride closer to home was organised. So 11's at Dorney, 19 miles for me and pleasant cycling. On arrival Pam, Irene, Alan and Dave had already arrived and Dave was tucking into a cooked breakfast. Graham and Ed soon arrived and as we were nearly ready to depart Vic also joined us and, he did have time to mention that he recently had found a long length of wire (the bead)  protruding from his rear tyre which he had cut off. As we left Alan headed home.

Off over the river to Bray heading to White Waltham and and the North side of the aerodrome and on to NCN4 to Knowl Hill and a short section of the bath road to Kiln Green and a left into Scarletts Lane to Ruscombe and the B3024 to Twyford. A left onto the B3018 the into Hungerford lane and and some quiet lanes brought us to lunch at the Bell Inn Waltham St Lawrence where Dave said his farewells. The pub was packed and we were lucky to get a table but food soon arrived. Setting off after lunch we soon realised that Pam and Vic were not with us so we retraced our step back to the pub to find that another length of wire was protruding from Vic's rear tyre, more bead, removal of the bead had caused the tyre to relax, expand and come off the rim! No cycle shops or station within miles.

A taxi for vic and his bike was the best option. But luck as surly on Vic's side as on asking the landlord for a phone number for a cab, he being an, ex cyclist, rummaged through his shed and produced and a part worn 700x28 tyre! Soon fitted, 40 minutes had now passed, we were on our way to tea. I took a direct route to Staines for tea at Norths where a delicious sponge cake awaited us.The only thing I don't like about that tea stop is that it's too cosy and it would have been so easy to doze off. Forcing myself out of the chair as it was near 5.00pm I took the direct route home along the A30 to Bedfont then the Staines road through Hounslow and home just after 6.00pm and just shy of 66 miles. A very pleasant day, the Sun did poke it's head through the clouds on occasion. Thank you all for your company and to Irene for providing a lovely afternoon tea and cake. 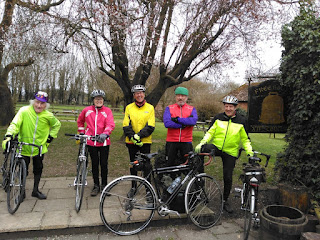 Jeff, Paul, Steve, Janice and Keith were waiting in the cafe in Old Coulsdon as I arrived.  As we headed off a newcomer, Brian, arrived who had missed his ride on Saturday so found ours to join.
We headed back downhill to Farthing Downs and cycled across the downs where we climbed Roffes Lane then descended White Hill Lane towards Bletchingly.
I had spent the time I had planned to check out the route being checked out in hospital so navigation was mainly using the route on the Garmin which was not always easy to follow.  As we meandered towards Oxted I realised at one point that we were about to rejoin a bit of the route we did earlier so we reversed and headed more directly to Oxted.
As we entered Oxted we met Ian who joined us.  I had not been able to contact the planned lunch stop so we stopped at Weatherspoons. Jeff left us here before lunch and Ian after.
After lunch it again wasn't clear on my Garmin how to leave Oxted but after a bit of discussion we headed off and arrived at Titsey Hill as planned. We avoided the steep bit by turning along Pilgrims Lane and joined Clarks Lane to head back towards our destination.
We passed Warlingham, Purley and Coulsdon to use the bridleway to Woodmanstern.  There three of us went to Oaks Park while the rest headed home. Unfortunately the cafe had closed three minutes before we got there so no teas.
For me 41 miles.

Easter Alternative To The Tour

If you can't face another Easter and those eggs, Dave Ward is prepared to lead a ride on Easter Sunday (March 27). His provisional plan is:

but he's flexible so if you're a better suggestion let us all know.
Posted by RaasayWarden at 09:00 No comments: 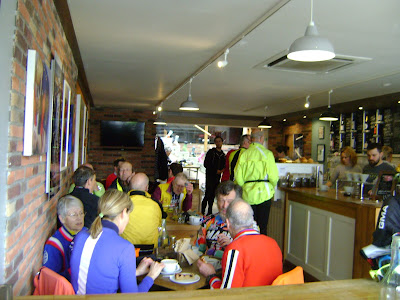 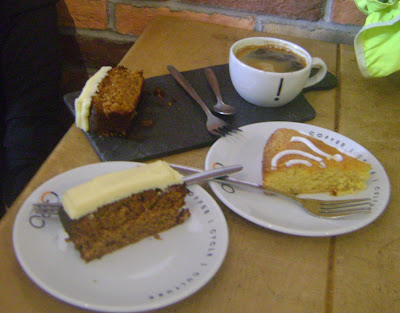 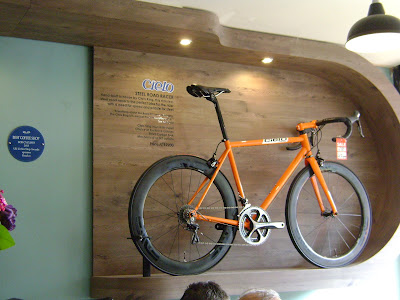 I made no less than six phone calls to find a suitable lunch venue today...............but settled for an old favourite.....The Saddler's Arms,Send Marsh. 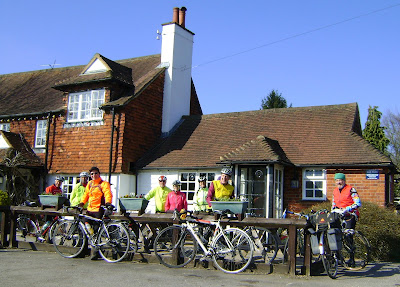 Not a pub insight

A very cold morning and Mothers day meant it would be difficult to get served for lunch in pubs so we were off to Fernygrove Farm coffee shop, which I visited about a week ago on a solo ride.I arrived at Hampton court at 8.50am and by 9.10am only Ed had arrived, I knew Irene and Alan would be at 11's so perhaps 3 to lunch wasn't too bad. I took a varied route West of Feltham on cycle paths and back roads to to Bedfont and the the usual roads to 11's at Vermeulens. A surprise awaited me as Irene, Alan, Dave, Don and Vic had gone straight there!  Soon the numbers were swelled when Roger and Graham arrived followed by Bob. As we were getting ready to leave Neal also turned up.

We followed the usual route to Datchet and Windsor then on through Dedworth and Oakley Green and the B3024 to Fifield and a right turn loop, to add a few miles, and back onto the B3024 and a left onto the A330 through Touchen End and then across the Drift road. Then onto the Ascot road to lunch at the Farm Coffee shop Hawthorn Hill. Don and Alan had already turned for home and Dave left us here. The coffee shop was crowded and we were lucky get comfy seats and tables and together.

The food here is all from the farm and good quality, we were soon catered for. On leaving Neal left us to head for Guildford to visit a relative. We had a shortish off road section down Hawthorn lane into Bishops lane to Maidens Green, Winkfield, Woodside and the B383 Sunninghill road to the Ascot gate of Windsor great park. Leaving the park at Bishops gate and the descent of Tite Hill and through Egham to find the barriers coming down on level crossing for the second time we took a detour through the industrial estate to come out on the causeway and into Staines for tea at North's teashop. where we were treated to loads of cake and tea with the added bonus of watching the recorded track cycling. We were getting too comfy and all good things must come to an end so time to depart and head for home. I headed for Wraysbury to add a few miles. I really lovely day on the bike with some Sun and no rain. Thank you all for your company with a special thanks to the tea lady at Norths of Staines. 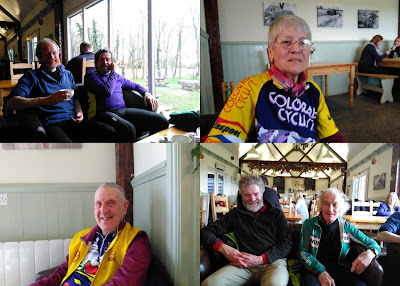 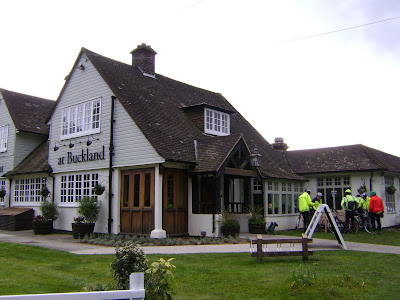 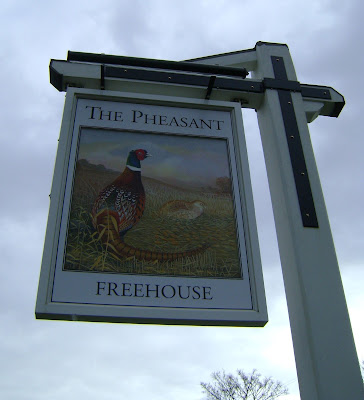 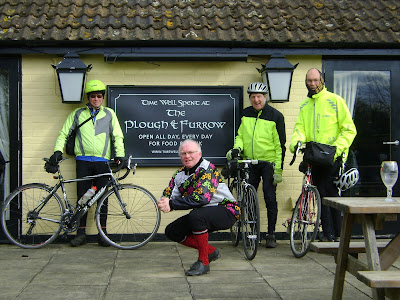 I had intended to take the track past Dungates Farm going south - east to join Flanchford Road but I actually took the track to the right of a house at the end of Dungates Lane (south) to emerge opposite Wonham Manor.
A mistake......but as it turned out, nobody appeared to notice.
From there it was across to Lonesome Lane and Salfords.
Over the M23 to pass The Castle at Outwood.
Ed flew down Scott's Hill ahead of me not expecting a fork left (Cogman's Lane).
Suffering from a mild cold I dined on soup.........which was far from hot......disappointing since Jeff and Terry seemed to enjoy their ciabattas.
Home for me was via Wray Lane & Asda,Burgh Heath..........a baguette for 15p anyone?

Around 8 degrees with a north-easterly,and some brightness too.

Date for your diary:

Posted by Tartan Socks(long) at 18:58 No comments: