With the C&M calendar ending on 30 September, it is too late now to try and pip Graham at the post. His 86 attendance points from 46 attendances put him head and handlebar above the competition. Sorry Ed, but you get the silver spoon.

Today I missed a sprint along the A25 to Squires at West Horsley to offer congratulations to GFH and share the company and bacon bap, but domestic duties demanded otherwise.

I'm sure that I shall see you all at next week's AGM. If you don't know where it is, just ask! 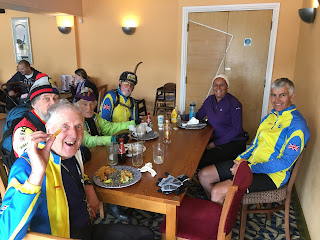 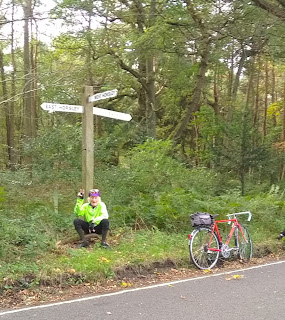 A bright but cool start as Bob, Simon, Graham, Ed, Lilian, Rachel, Mike, Vic and I met at Squires, West Horsley for elevenses.   All of us except Bob and Lilian set off for Godalming just after 11.00.  I think I just saw Alan turning into the other side of the car park as we set off.   Sorry we missed you, Alan, but at least we left you some company!   The main feature of the outward ride was the climb of Shere Road and, once that was out of the way, it was fairly standard stuff to The Jack Phillips.   This is always a busy pub so those armed with the Wetherspoons app could feel quite smug as they relaxed and awaited the return of the others from the scrum at the bar!   We were still back on the road by 2.00 and did the Jack Phillips full scenic tour, that is, the pub, the new memorial, and the original memorial/grave (there was some dispute about this - it is a memorial to Jack Phillips, but also a grave (his widow's, we think)).   Then it was a brisk up and over at Littleton and the tried and tested route through Guildford and along the A3 to Potters Lane.   Send, Pyrford and West Byfleet followed on the way to Crockford Bridge Garden Centre  where some stopped for tea.   Thanks for your company all, and I hope you enjoyed the ride.
Posted by David W at 18:46 1 comment:

Several of you have been emailed but if not read on.

With such a poor forecast (yellow warning) I suspect there won't be a full ride tomorrow. But I'll cycle to Henfold with "swimming" gear and take it from here.I did speak to our local correspondent last Wednesday - we think Henfold is open but if not 11s will be at Tanhouse Farm.

If this year is remembered, it'll be because of its weather. This was yet another C&M ride which ended at 11s. I didn't need drumming on the Velux to tell me I was in for a wet ride. Heavy before noon, and drizzle after meant  full car headlights and deep puddles.

Dave was tucking into breakfast at a rebuilt Henfold Lakes. The prices are higher (eg cake £3.50 a slice) but other things haven't changed - specifically the approach road. I'd arrived soaked despite my best waterproofs (Goretex, Sealskins, etc) so when we left around 1115 it was in differing directions! I went back the way I'd come, Dave headed for Horsham hoping for a helpful tailwind. Frustratingly the rain stopped five minutes from home and an hour later it was blue skies and patchy cloud. Sadly I don't have second sight!

When I arrived at the Garden cafe Windsor, Pam, Alan and  Bob where already there. Soon to be joined by Graham,  Ken and Paul. Then Caroline and John arrived also Ed and Lillian arrived at dead on 11.00 and as usual Vic arrived late at 11.10.

Sadly only Pam, Vic , Ken and  Paul were joining me on the ride. We took the route across Dorney Comon and up through Burnham, Littleworth common and then the nice decent down to Hedsor and Bourne End. Then a river path and on to Little Marlow, more off road tracks took us to the edge of Marlow and then back roads to lunch at the Marlow Donkey pub. By now the sun was shinning and we managed to fined a table in the garden. Although the online menu has sandwiches but not on a Sunday, Ken and Paul had brought their lunch with them. Pam and Vic had mini Sunday roasts and I had a small Camembert cheese starter. 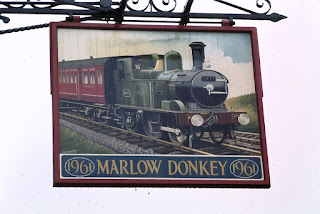 Leaving the pub at 2pm we set off for the climb up Quarry Wood road and then down to Cookham where Vic left us to wend his own way home. Down to Maidenhead and the path through Braywick nature reserve and Bray (where we spotted Vic taking a path along side the M4) and on to Fifield, Dedworth, Clewer and Windsor where Ken headed home while Pam, Paul and I headed to the Cinnamon cafe for tea, they give cyclist 20% discount and the Cinnamon bun was my carbo up top for the 16 mile ride home. A lovely sunny day on the bike with good company. 66 miles door to door.

Hail to the Leader

A very warm welcome to Pete Beyer, joining the C&M this time not as TEC,  but for the first time, I believe, proudly wearing  the leader's jersey. May this be the first of many.

From Graham's generously written ghost report, it seems that Pete put everybody through their paces, at some risk of inducing altitude sickness. That might explain the apparent omission of a ghost rider from Graham's list of enthusiastic attendees. Like our Hon. Sec., I too counted out a dozen riders. However, for me it was a baker's dozen. Or did those rheumy eyes imagine the misty form of Bob emerging from the the shadow of the nearby church? I'm sure that Bob will tell us: he never fails to chide me if his name is absent from the attendance record.

It was a pleasure to read of the ride I missed, with my leg up and a warm beer in hand.

In case the scorer's memory isn't what it was!

A surprisingly dozen gathered at a well used Headley Tea Rooms with scarcely a regular among them.

Those who expected a gentle spin perhaps along NCN22  were wrong! Firstly it was down to Burford Bridge then up to St Barnabas where we encountered the Denbies half marathon. The undulations continued down Crocknorth and up Green Dene. After Shere's ford and a final climb the William IV in Albury Heath was soon in view - the front garden packed with customers. But the menu was limited due to refurbishment - sausages on a stick!

Here Radnor Lane and Friday Street got a mention so Ray and I decided to bail out over Newlands and down to Salisburys and home.

1 point: Jeff and Bob(how could I forget?)
Posted by RaasayWarden at 10:42 No comments:

On a perfect day for cycling, Lilian, Jeff (welcome back!), Ed, Paul, Pete Marmite (aka Beyer) Bob, Alan and Terry met at the newish South Down cafe, Brockham for elevenses. Suitably refreshed Bob and Alan set off to do 'their own thing', the rest headed south. A somewhat circuitous route was required to get us to Faygate for lunch so we went via Snower Hill, Leigh, almost Irons Bottom, Norwood Hill to Charlwood. Passing what  was The Gate public house years ago, we soon passed The Lamb at Lambs Green to arrive at The Holmbush, Faygate in good time for lunch. Few other customers meant our food came fairly quickly.

After lunch we briefly retraced our tyremarks before turning off towards Wimlands and Langhurst. Sadly we noted The Royal Oak (where else ?) in Friday Street is now closed. Threes was planned for North Holmwood church, reached via the straightforward route to Capel then alongside the A24 briefly before taking to the lanes. Some didn't stop for tea but the chocolate cake was wonderful. After tea we made our various ways home.

Thanks to Pete for backmarking and to all for company.