Most of you will have received an email. But you didn't, I've summarized its content removing Steve and Ann's contact details so email me if you need them!
Same arrangement as last year
The Angel Pub, Angel Rd, Thames Ditton KT7 0AU
Cost £10 for two courses:
MAIN          : Beef, Chicken or Veg Risotto
DESSERT : Fruit Crumble or Treacle Sponge
Start            : 12.30 in pub. Food served from 1pm in function room.
This year preferred payment method is by bank transfer. After doing the transfer, email your choices to us and we will confirm within a few days that we have received it.
Alternatively post choices with payment before 17th January.
NOTE: THERE WILL BE A RIDE STARTING FROM NORTH CHEAM WHICH WILL COME TO OUR HOUSE FOR ELEVENSES (from 11 till 12.15) BEFORE THE LUNCH. ALL ARE WELCOME WHETHER ON THE RIDE OR NOT.
Posted by RaasayWarden at 10:17 No comments:

On a gloomy damp Sunday morning when normal people turn over for another 5 minutes I met up with Alan and arrived at Stoke d’Abernon Garden Centre to be greeted by several smiling faces. Not wishing to risk the Tilt, we made our way via Cobham, Wisley airfield and the centre of Woking to arrive at The Plough in Horsell to a lovely welcome from Nicki. We were treated very well; the pub was fully booked, which is really nice to see, but a table was ready for us. After lunch we left at 1.30 pm to join the Basingstoke Canal near Arthur's Bridge and continued along it to West Byfleet where I bade farewell, and Jeff and Helena rejoined after an on-road experience. The group continued to Ockham Bites where they sampled the cakes, teas, coffees.


Thank you everyone for turning out, at least the rain didn’t amount to anything.
Posted by RaasayWarden at 19:53 No comments:

A visit to Camden Lock 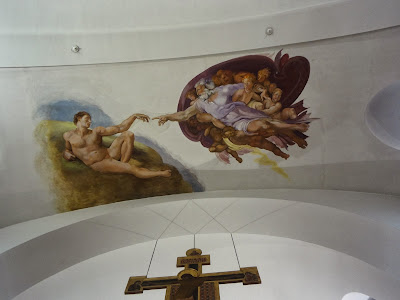 Having seen seen the article on BBC News on Saturday morning I decided to to take a trip along the Regents Canal from the Olympic Stadium. It is a route that Bob Stairey showed me some time ago but beforehand I visted a church with a depiction by an artist of the origins of man by Leonardo a replica of what you can aparently see in the Cistene Chapel in Rome! 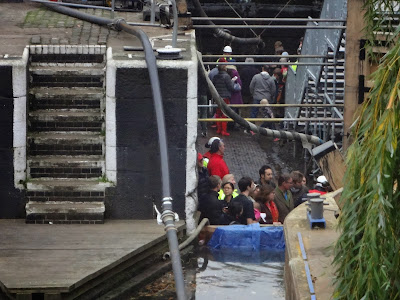 This is a telephoto shot of the emptied lock exposing the floor with its brickwork completely intack! 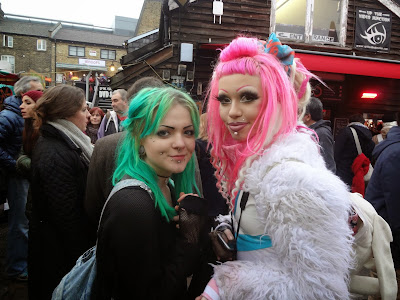 At the lock I came across some peculiar sights! 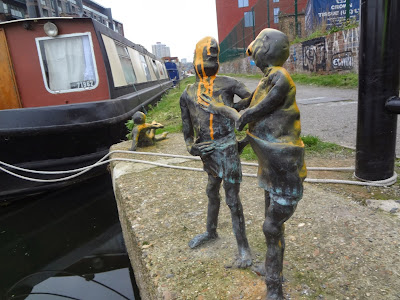 While journeying alon the canal I came across these figures by a barge which regretably had been disfigured by yellow paint. In all I biked 67 miles B4 returning home. Not that it would be a mystery anymore I would be happy to conduct a ride next year to the church if anyone is interested?

Our mid-morning watering hole at Gomshall was close to the flows of the Tilling Bourne and the A25, at a venue new to me called Tillings. Until recently it was a Thai restaurant, before that a pub called the Black Horse and before that please let me know. Generously tabled, nearly all were occupied and the spacious room was buzzing with a surprising number of people out for Sunday morning coffee. How does it attract such numbers? Breakfast portions were generous, with prices to match. The cake looked super-scrumptious, but remained intact. However, with the numbers to serve, service, while attentive, was not of the fastest.

With lunch just a hop away we dallied over elevenses and did not saddle up until gone 11.30, some for lunch and some for home. Our route from Shere was simple, due south up Sandy Lane and Hound House Rd to cross Winterfold Forest, down to Ewhurst and a sprightly pace along Horsham Rd and Froggetts Lane to Okewood Hill and the Punchbowl Inn. We were expected, with a comfortable corner of the Public Bar set aside for us. In great contrast to the previous Sunday at the unwelcoming Holmbush Inn at Faygate, our welcome was warm, the food and beer good. Special mention must be made of the excellent Badger ‘Hopeful Hop’. Here too we dallied, with ample time to digest our lunch, refresh our glasses and discuss with those with local knowledge the authentic name for Okewood Hill, Oakwood Hill or Oakwoodhill.. The road signs are not in harmony and the judgment of our friendly hostess was countermanded by the sign above the bar.  She claimed that ‘oke was a rivulet, though I can find no authority to confirm her belief.  It seems to be a Middle English form of ‘oak’.

With Capel Church close enough for us to hear the bells summon the faithful to tea and cakes at 3pm, we made another late departure, to arrive at Capel in good time tor the final cakefest of the year. Having taken our last rites, with dusk fast approaching, one by one we look our leave for home, most I imagine arriving on their thresholds in the dark and recording a late autumn mileage total of some 50 miles. We did do some cycling. The ladies of Capel are next due to regale us on Mothering Sunday, 30th March 2014.

Fifty minutes is all it took to get to Bromley (Waitrose) where Bob was enjoying his (free) pot of tea.
We were probably away well before 11am which at this time of year is a good idea.
I continued east,through Jubilee Park where some careful navigating was required,the intention being to reach the lanes going toward Hextable.
This involved climbing three sets of steps going over a junction of  railway lines between London and Chatham/Tonbridge.
After the last set it was mucky to say the least (this was part of the London Loop) but we soon emerged into a valley going toward Tongs Farm.
Just after the pleasant Swanley village,under the M25 to South Darenth and Horton Kirby,our lunch stop.
At 12.50pm we parked our bikes and headed into The Bull where Keith,Ed & Jeff dined.
Richard,Paul and myself sat outside enjoying the bright sunshine and views down the Darenth valley.
After new roads for most all morning,we returned via Eynsford and Lullingstone Park Visitors Centre,climbing the only real hill of the day to freewheel down to Chelsfield.
Change of tea stop to High Elms to save time but lights were required upon leaving and a ETA of 6pm.
An enjoyable ride in Kent and by staying north we were able to avoid hills,just gentle undulation.

Sunny with little cloud,less than 10 degrees. 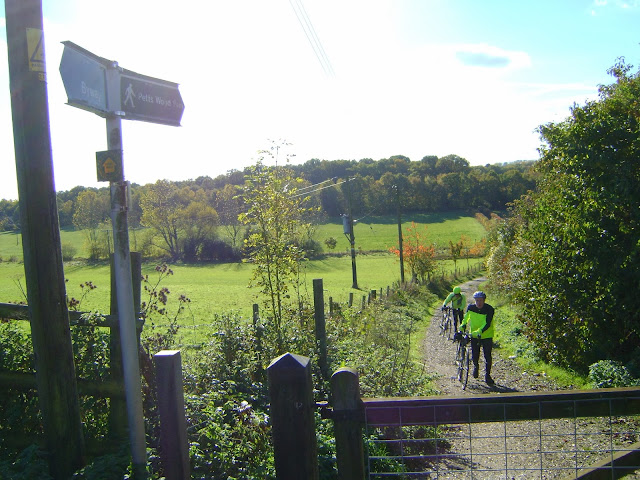 Posted by Tartan Socks(long) at 17:59 No comments: 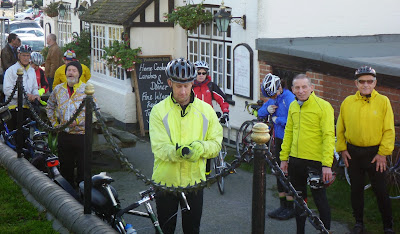 Fortunately a fast day, as the reception at the Holmbush to a group of cyclists seeking lunch was as frosty inside as chilly outside. Food was provided but no table. We might charitably suspect that the vacant tables were already booked. Stools for some and a two tiered cocktail table had to suffice.
Posted by Jeff at 17:36 No comments:

Today saw the first nip of winter in the form of a fresh northwesterly. At Morrisons I counted 13 including Clive Oxx, now a Reigate resident. Ed's XI headed west along the A25, and over Reigate Heath. From Leigh we climbed to The Fox Revived when Ed caused a minor surprise by turning right. Thus we descending into Charlwood via Stan Hill. Any traffic disappeared after we turned into Prestwood Lane and soon a fornlorn looking Gate hoved into view. It's not for sale! After Lamb's Green we halted in Faygate. As Ed put it, "Colgate is a hill too far."

We headed back through Rusper, turned right before Newdigate church down Hogspudding Lane and so to Brockham where as Bob had predicted the church was closed for teas. Large crowds peered into the smouldering and occasionally flaming remains of last night's bonfire. And so we departed for Pilgrim Bikes at West Humble station. With 3 tables and 11 chairs it's probably too small for our groups. Just a lucky four got cakes.
Posted by RaasayWarden at 11:51 No comments: