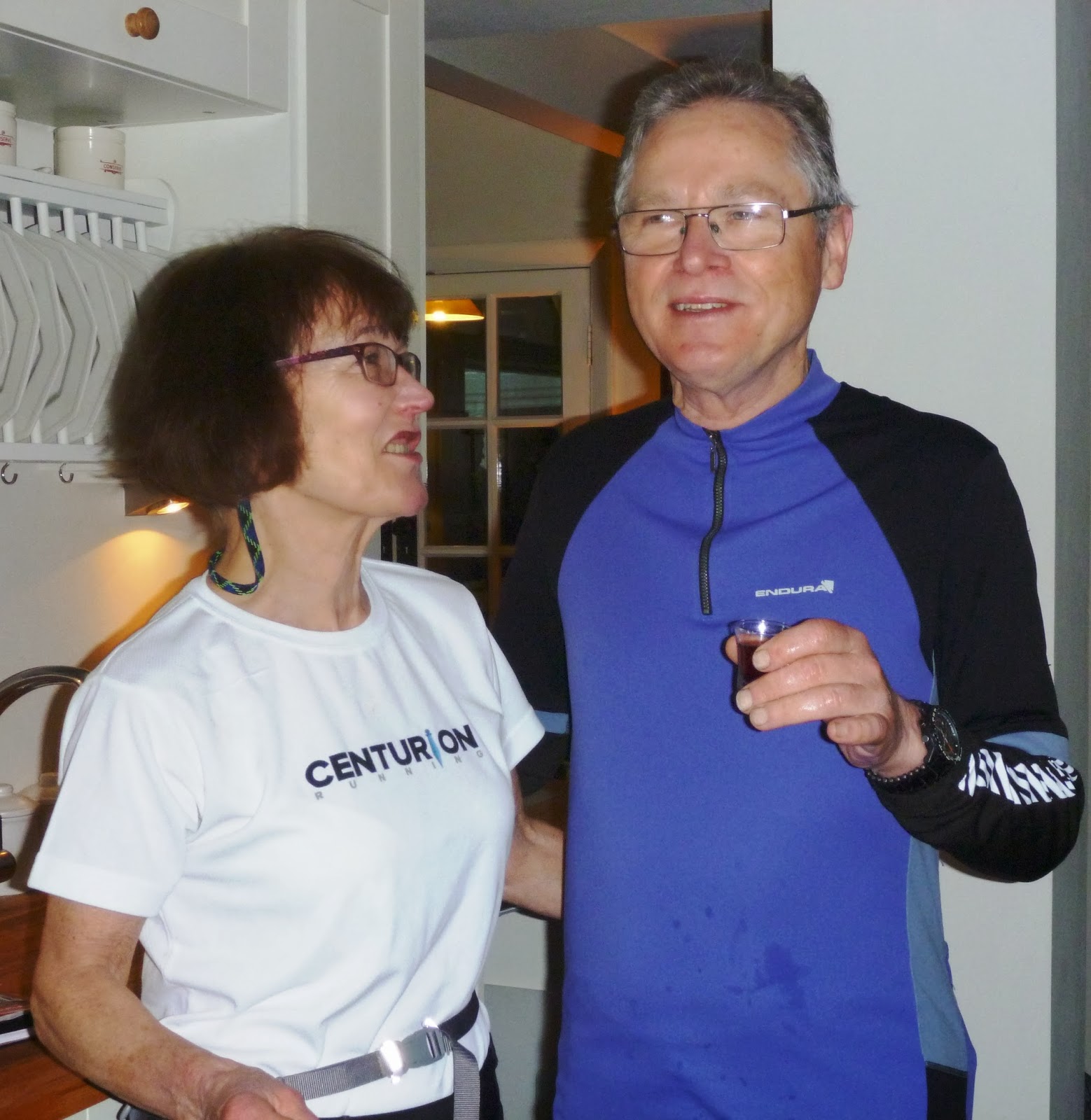 Let's drink a toast to our Host and Hostess 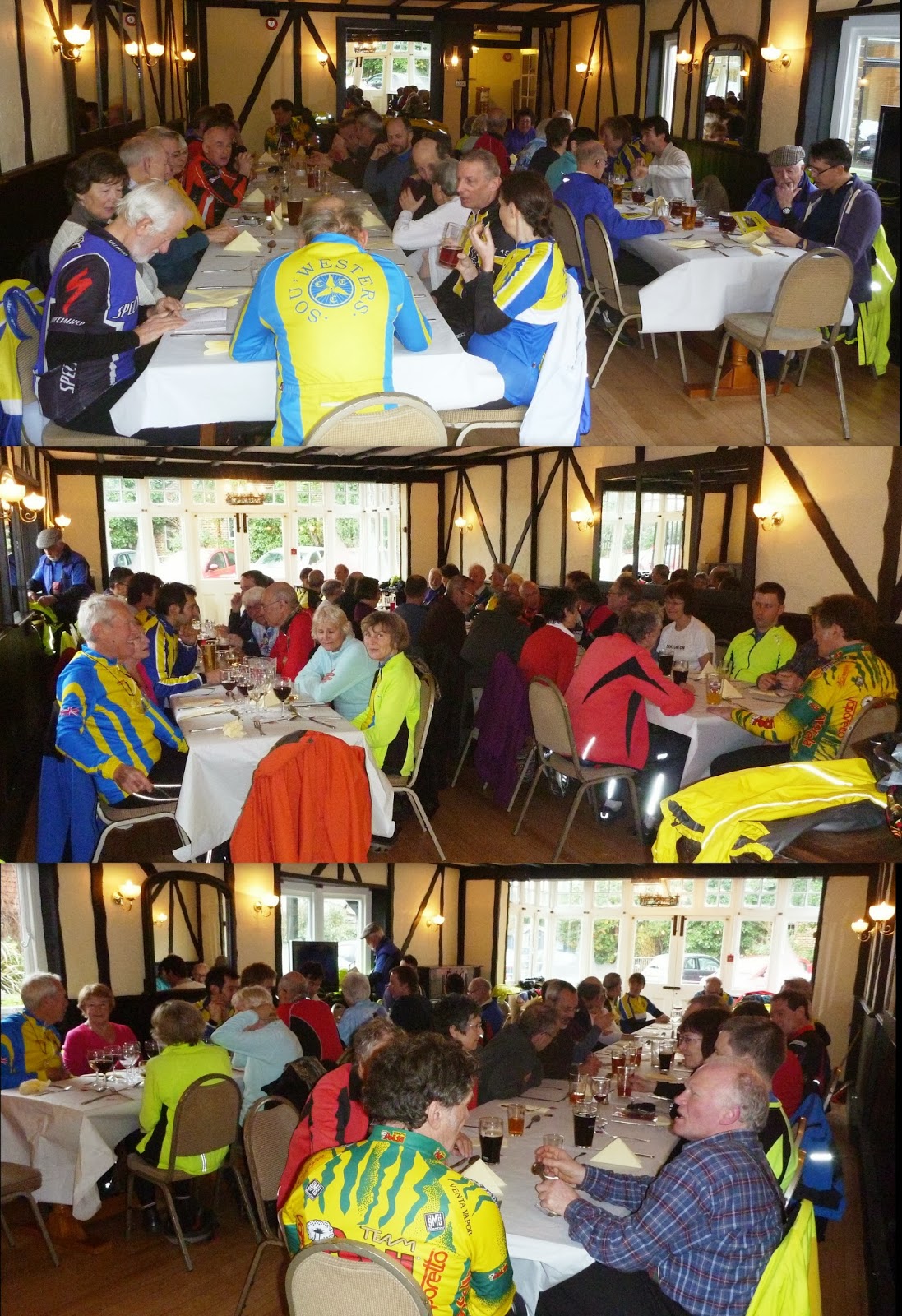 The Cheam & Morden ready for lunch at the Angel, Long Ditton

See SWL Blog for initial announcement. Thanks to the kind help of Graham Hill entry on line using Gmail will soon be available - watch the CTC South West London Blog site for more details.
Posted by mike morley at 20:04 No comments:


A day of hills and puddles.........and floods too.
Richard took his usual route avoiding Croydon flyover but included an illegal manoeuvre of Wellesley Road.
In West Wickham,we turned right (Wickham Court Road) climbed then descended down Corkscrew Hill to the Addington Road.
Straight over (Layhams Road) then Richard punctured.
Myself and Ed opted to continue leaving two assisting.
Salt Box Hill (15%),I overtook Jeff  to join Main Road,Biggin Hill and Waitrose.
Free cappuccino but in paper cups due to mechanical breakdown.
After refreshment it was Jail Lane to Cudham then a long freewheel down to Green Street Green.
In Chelsfield we encountered a long stretch of flooded road,the little used Skibbs Lane (see video above).
Shortly turning right and climbing to join Daltons Road which afforded fine views of Canary Wharf.
The Chequers pub appeared more than adequate...........indeed Richard couldn't stop talking about the "soup for only £3.50".
Ian made an appearance having gone to the wrong "Waitrose" (Bromley).Bob also joined us for a shortwhile before we set off homeward.
Over the M25 to descend down to Eynsford which attracted alot of onlookers due to it's flooding.
After Lullingstone Park Visitors Centre and the Hop Shop the road rises steeply but Richard took the first left and climbed the less severe Cockerhurst Road........good choice Richard!
It was decided Downe was simply not on coming from our direction so three enjoyed tea at High Elms.
Richard returned via West Wickham whist Paul & myself took the usual.........another of Pete Mitchell's excellent finds. (Threehalfpennywood,The Sandrock pub & Coombe Wood.) 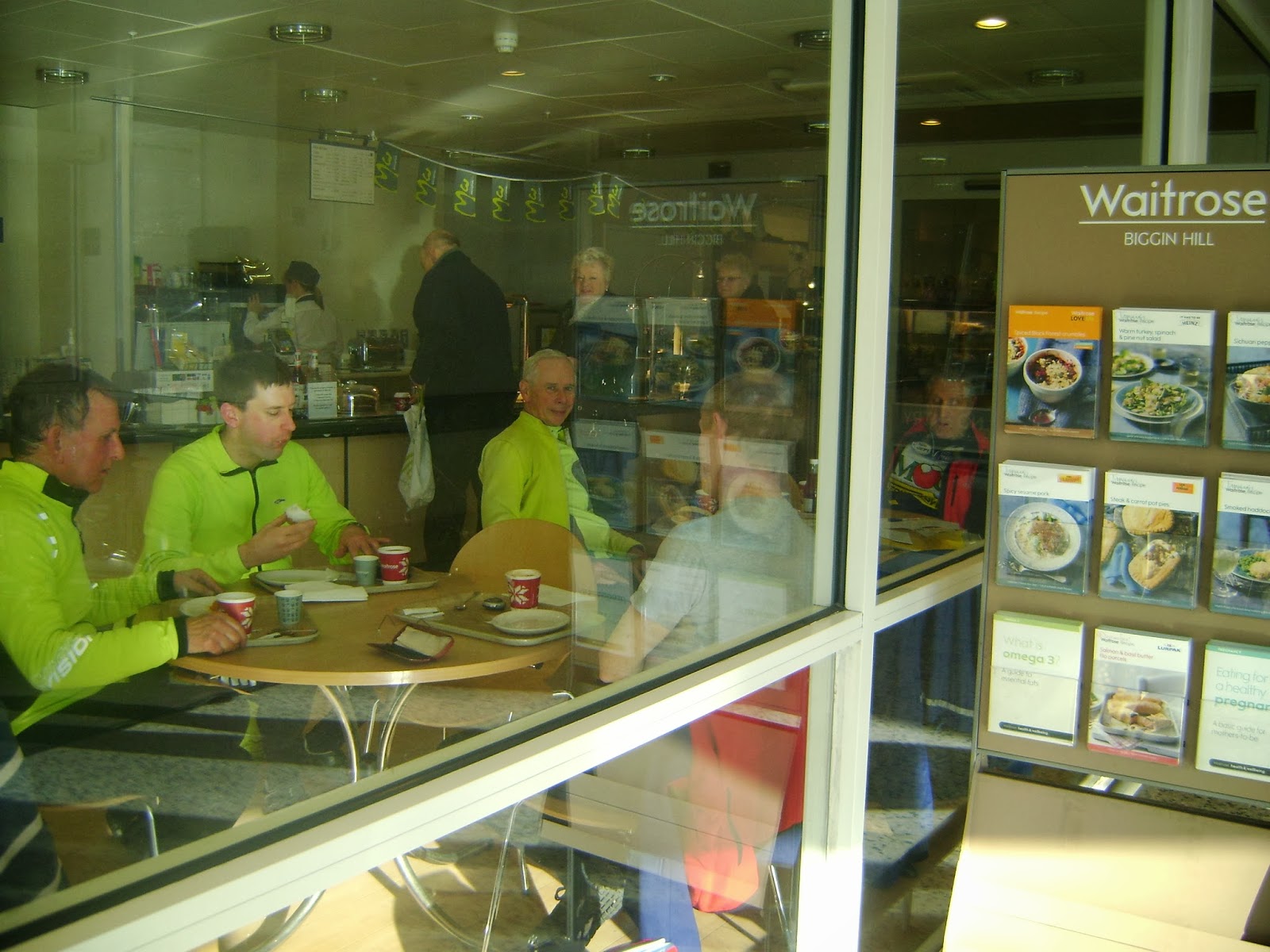 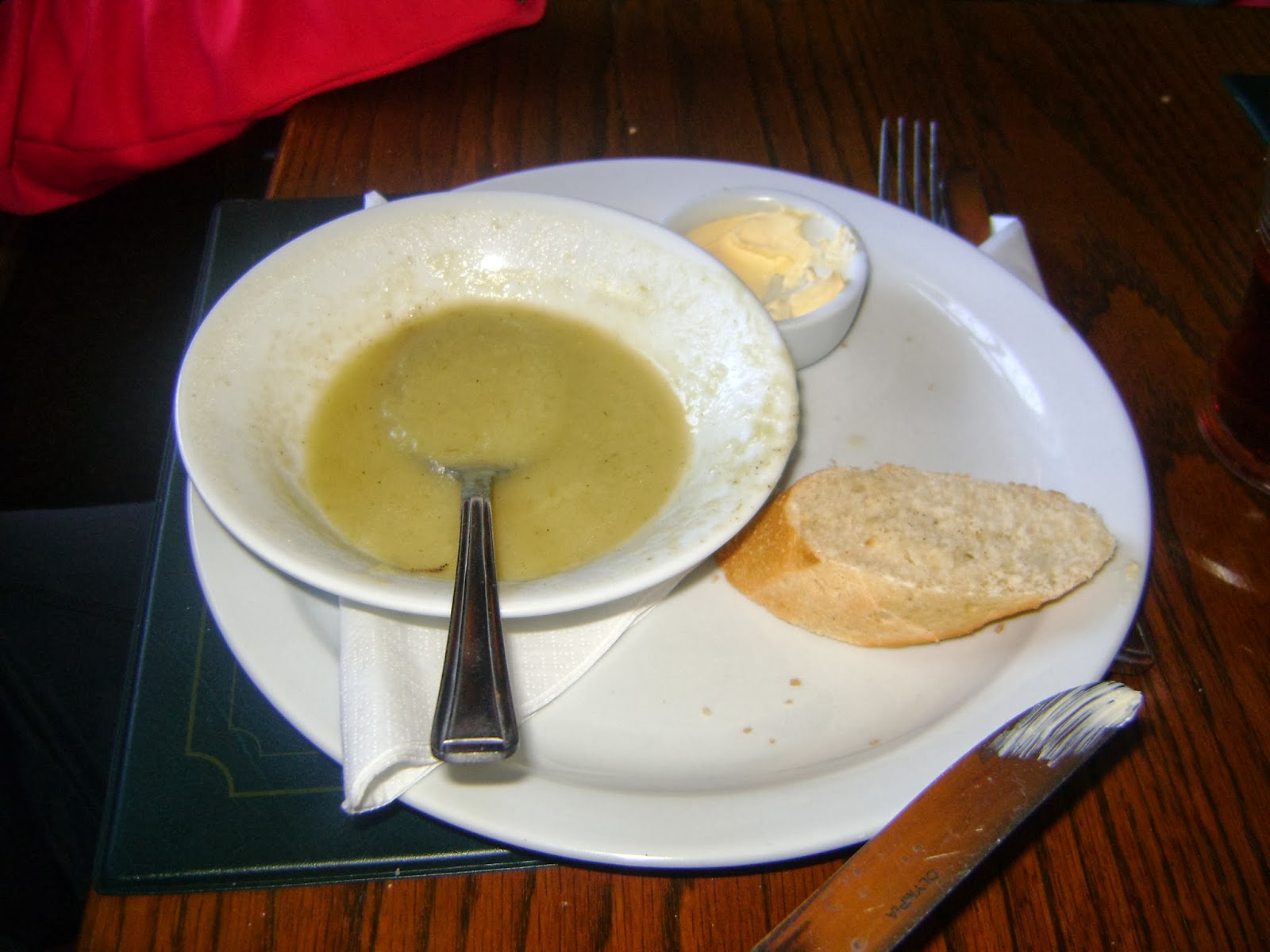 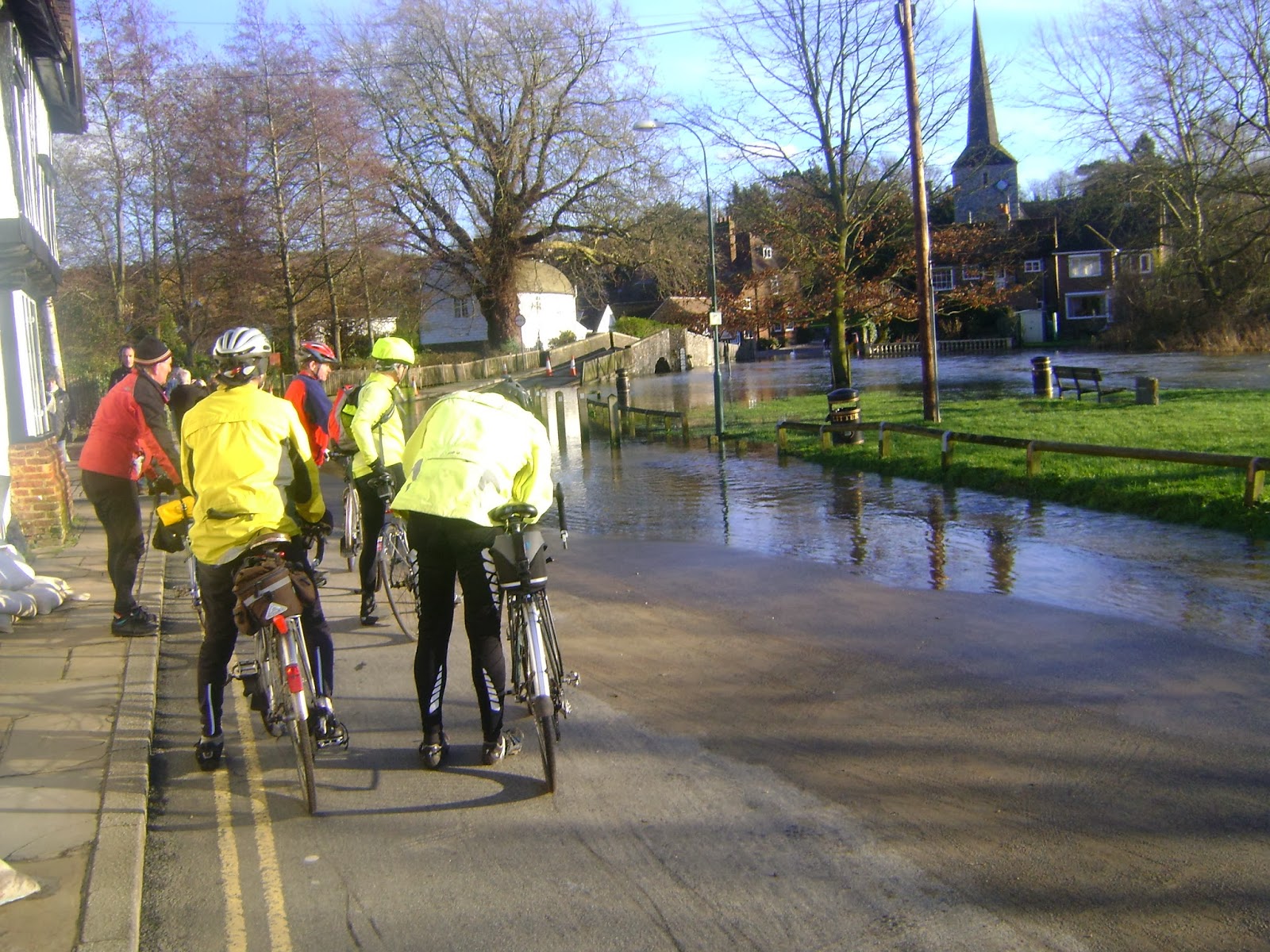 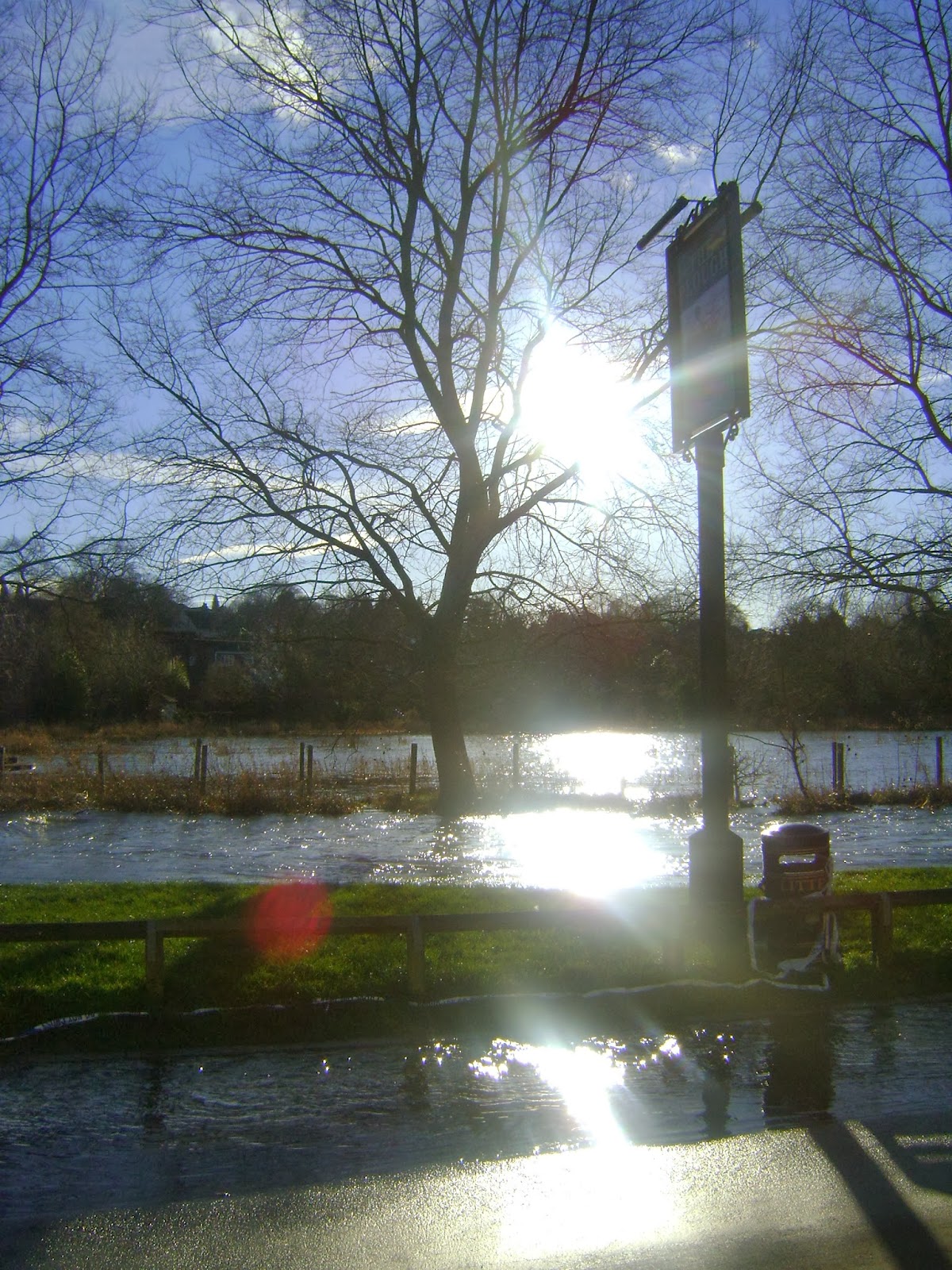 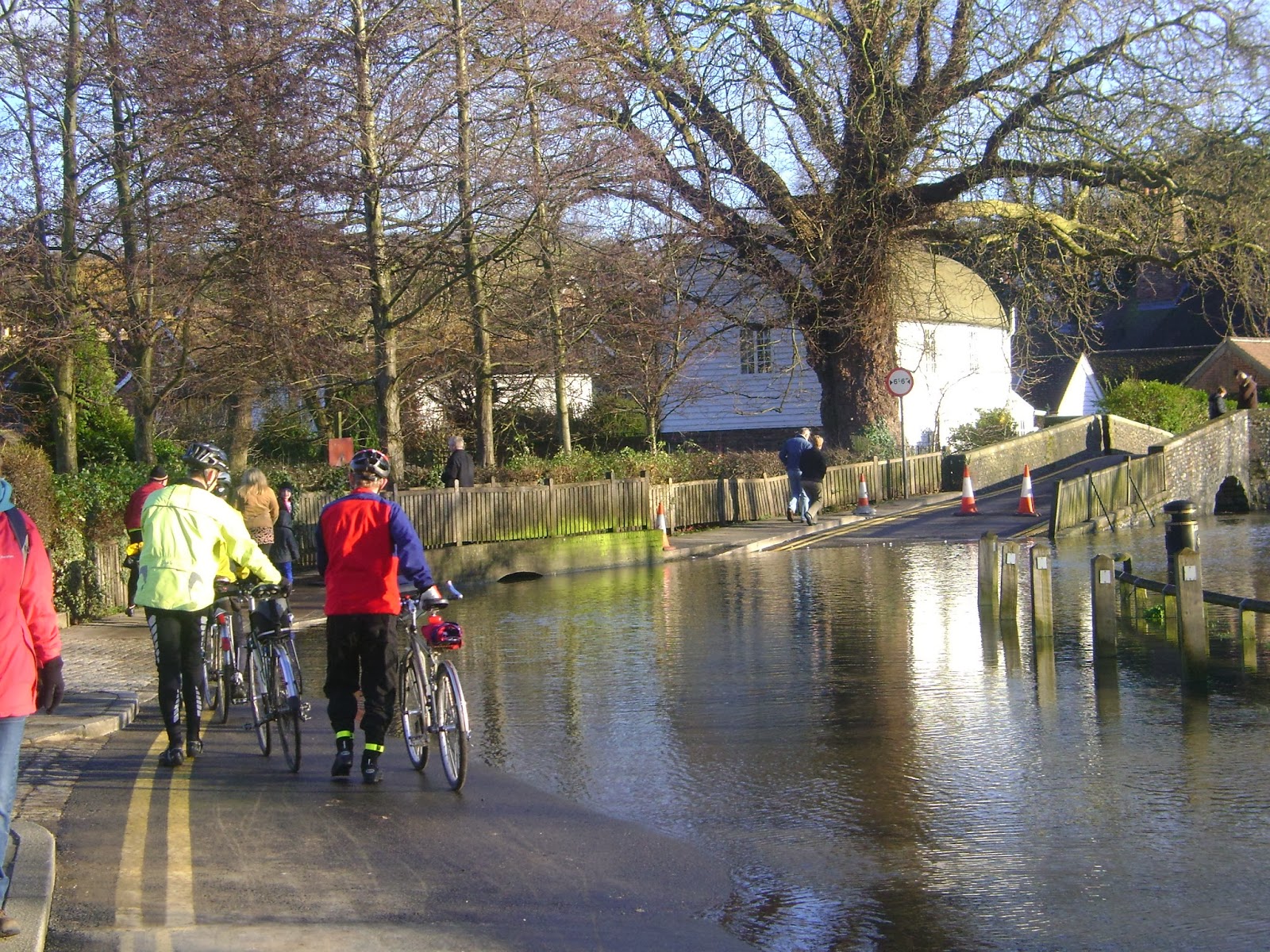 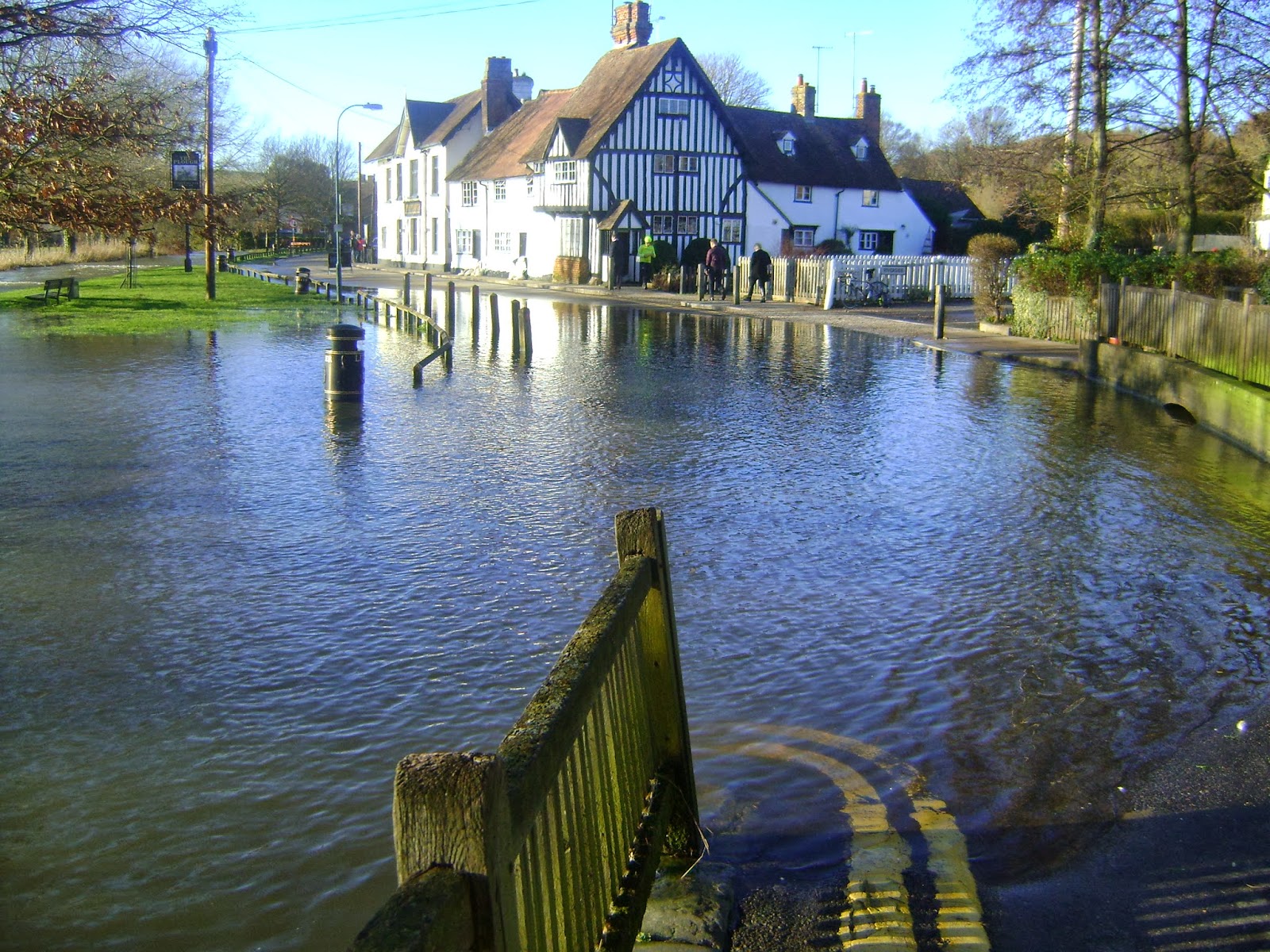 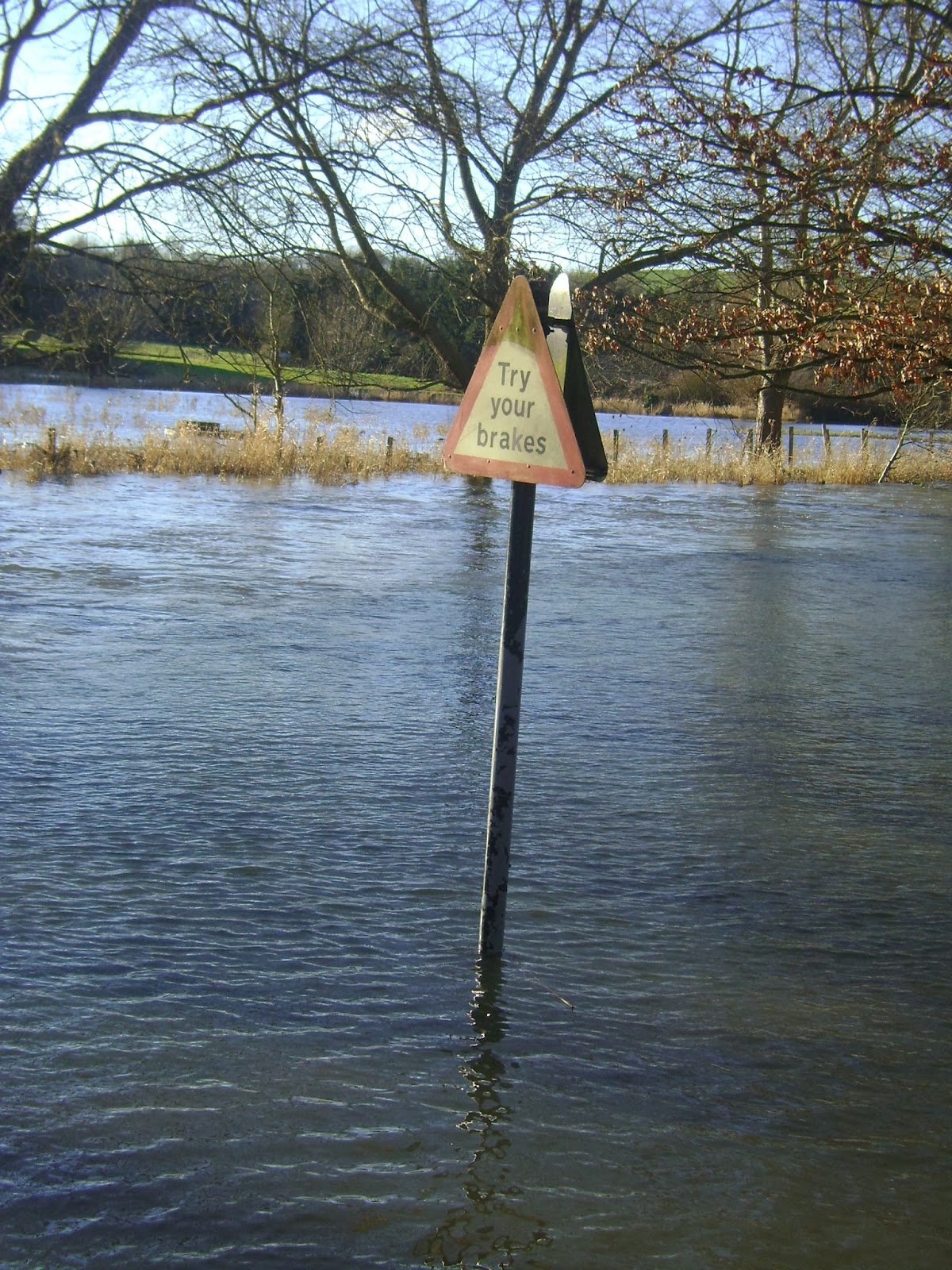 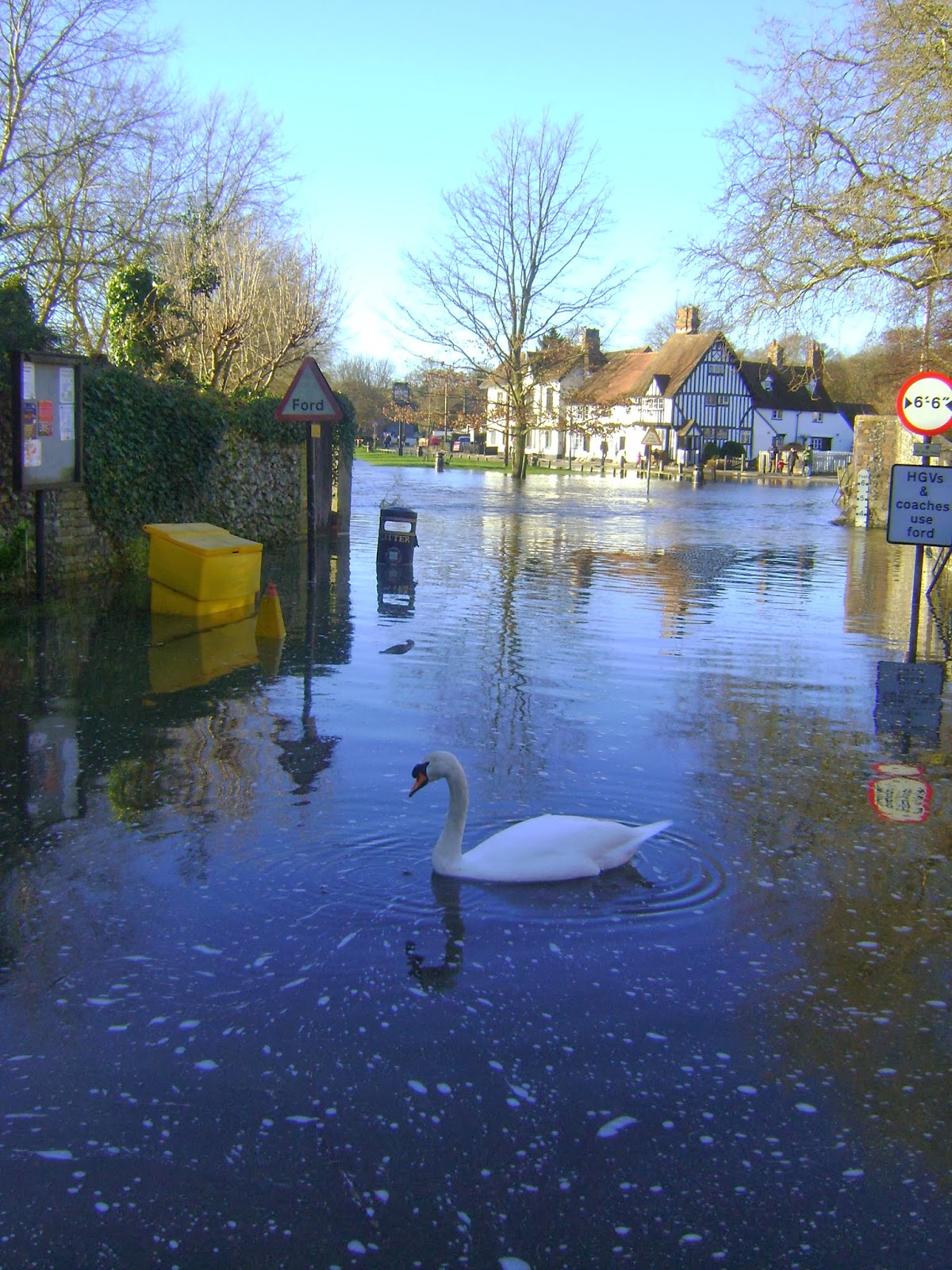 Posted by Tartan Socks(long) at 17:38 No comments:

Biggin Hill - Crockenhill - High Elms
There were a lot of hills 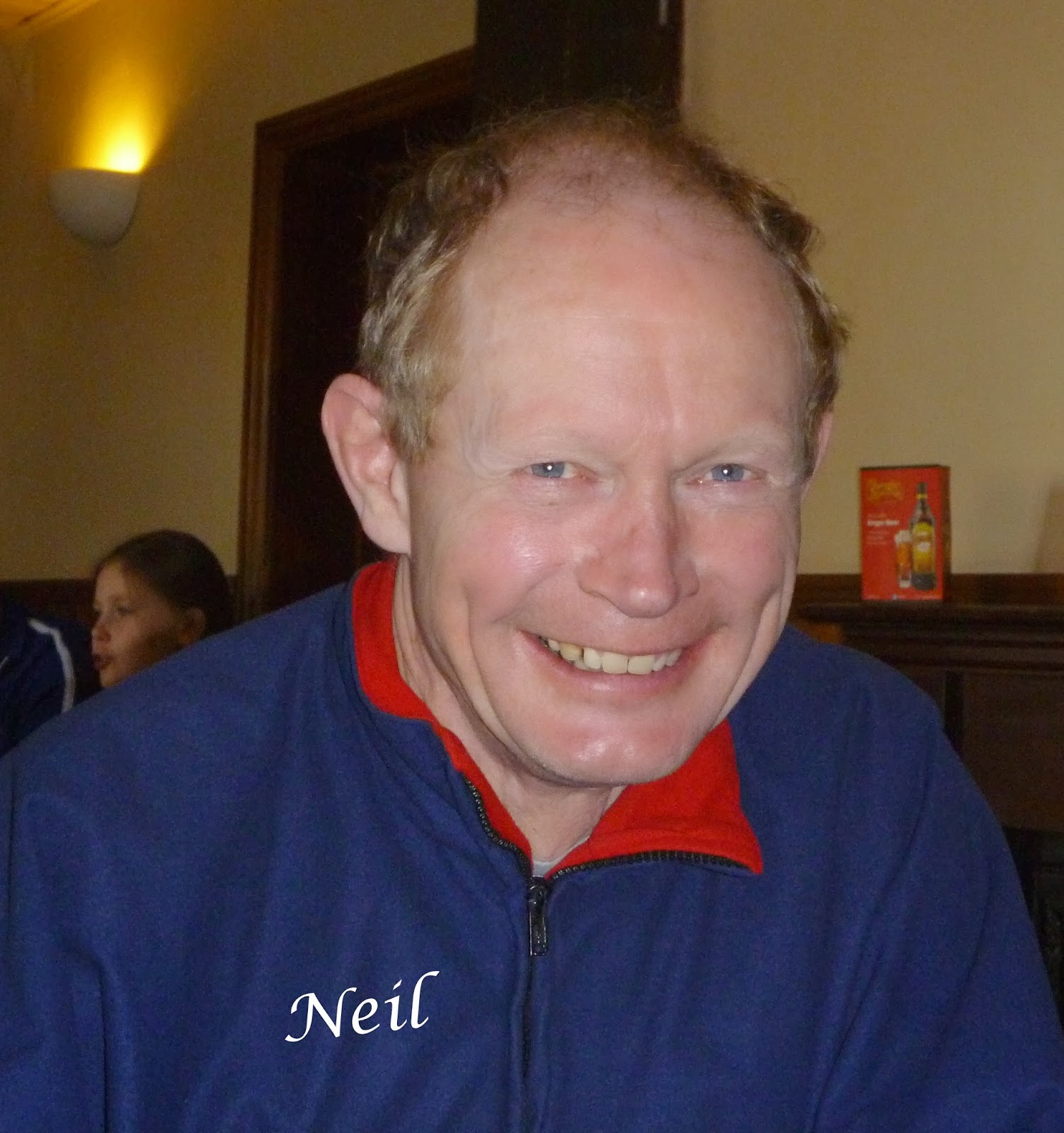 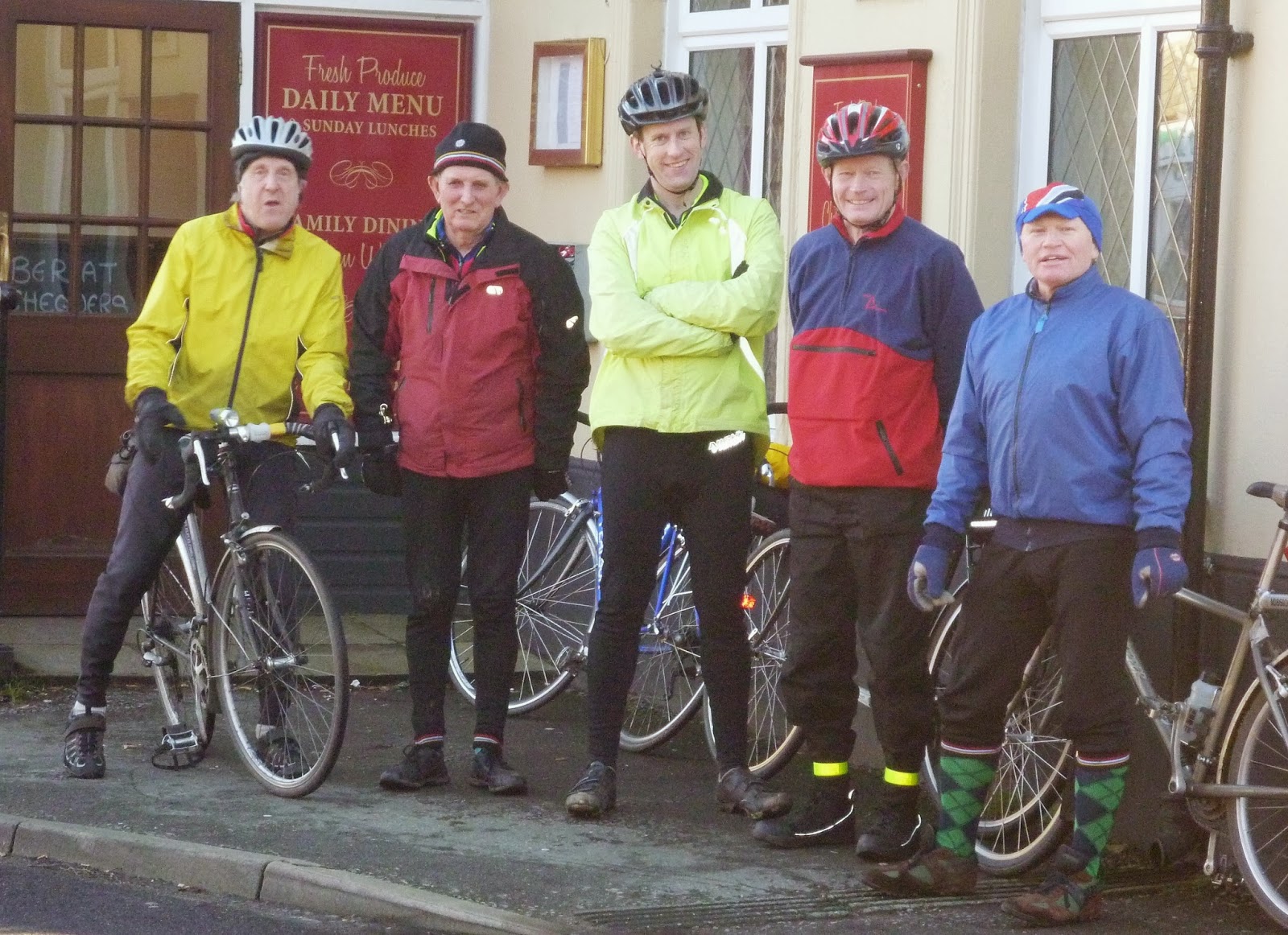 After lunch at the Chequers, Crockenhill. 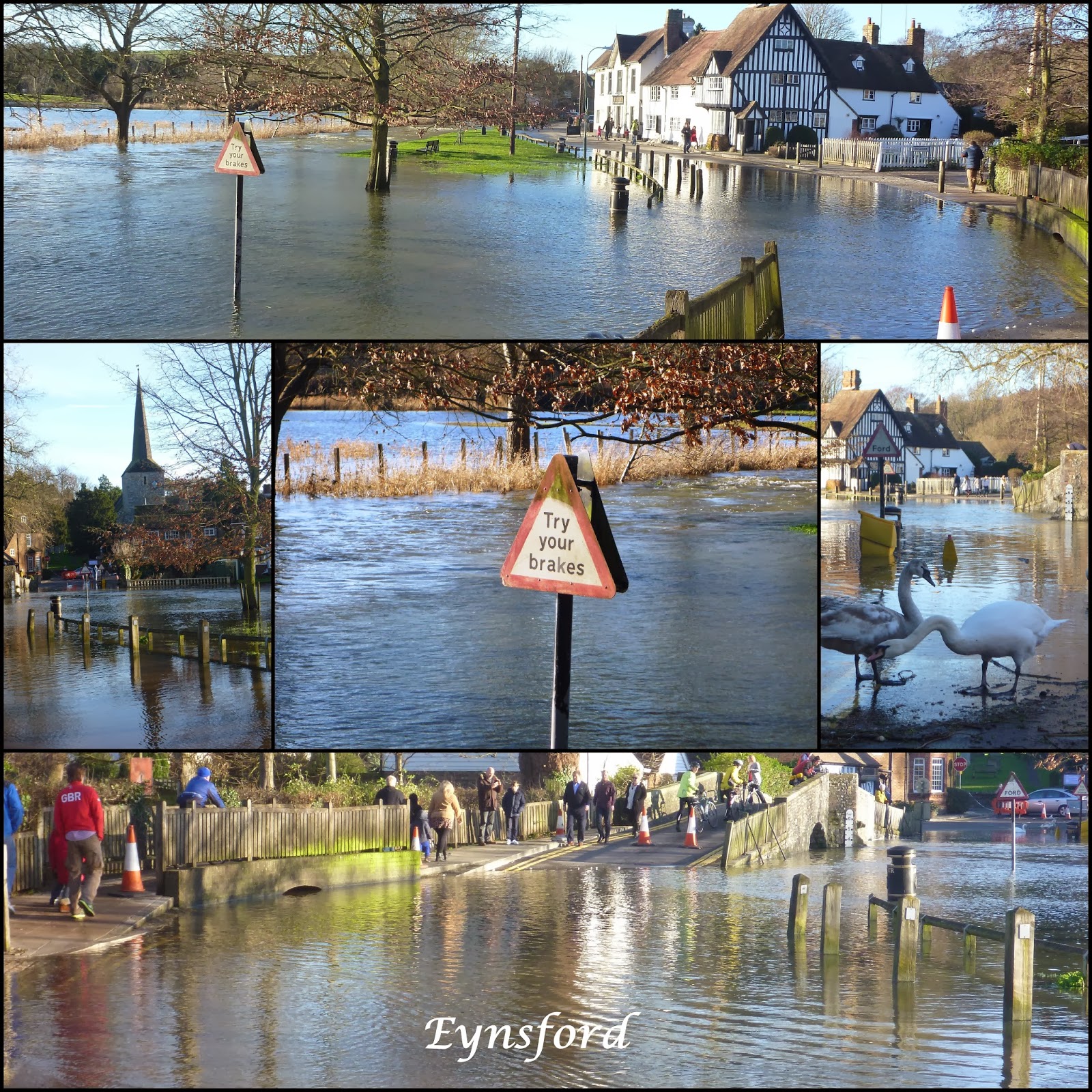 Eynsford as you may not have seen it before. You can see where the ford in Eynsford comes from. 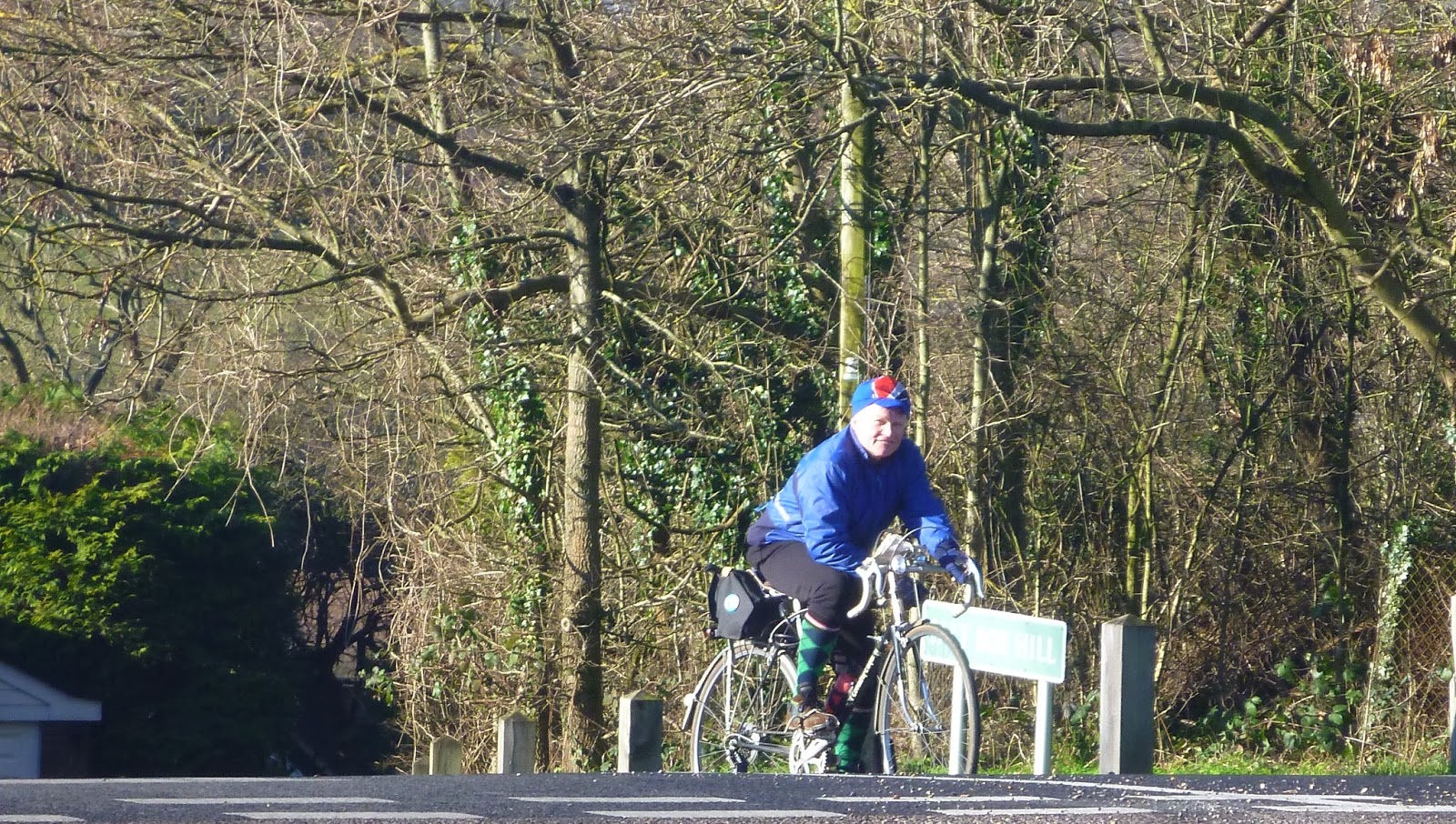 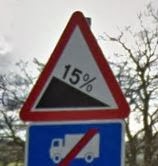 Andy cresting Salt Box Hill. There were a few like this.

Faced with a yawning lack of interest in the Annual Photo Competition, the DA Committee has considered whether, if printed photos were now so old hat, would digital entries arouse more interest and excitement. One way to find out:  invite members to submit entries as email attachments.
So if you have some photographic gem in your digital archive, why not take a punt and send it to the following address: swlda.photos@gmail.com.
The rules and categories are simple:


Photographic Competition:
A photo showing a bicycle or other  cycling association.

The award for a winning photograph in each category will be given to the photographer who took the picture, not to the model.  The photographer's name, CTC membership number, the category, and a short, descriptive caption should be provided - not image001.jpg! Couldn't be simpler.What have you got to lose? Give it a go. 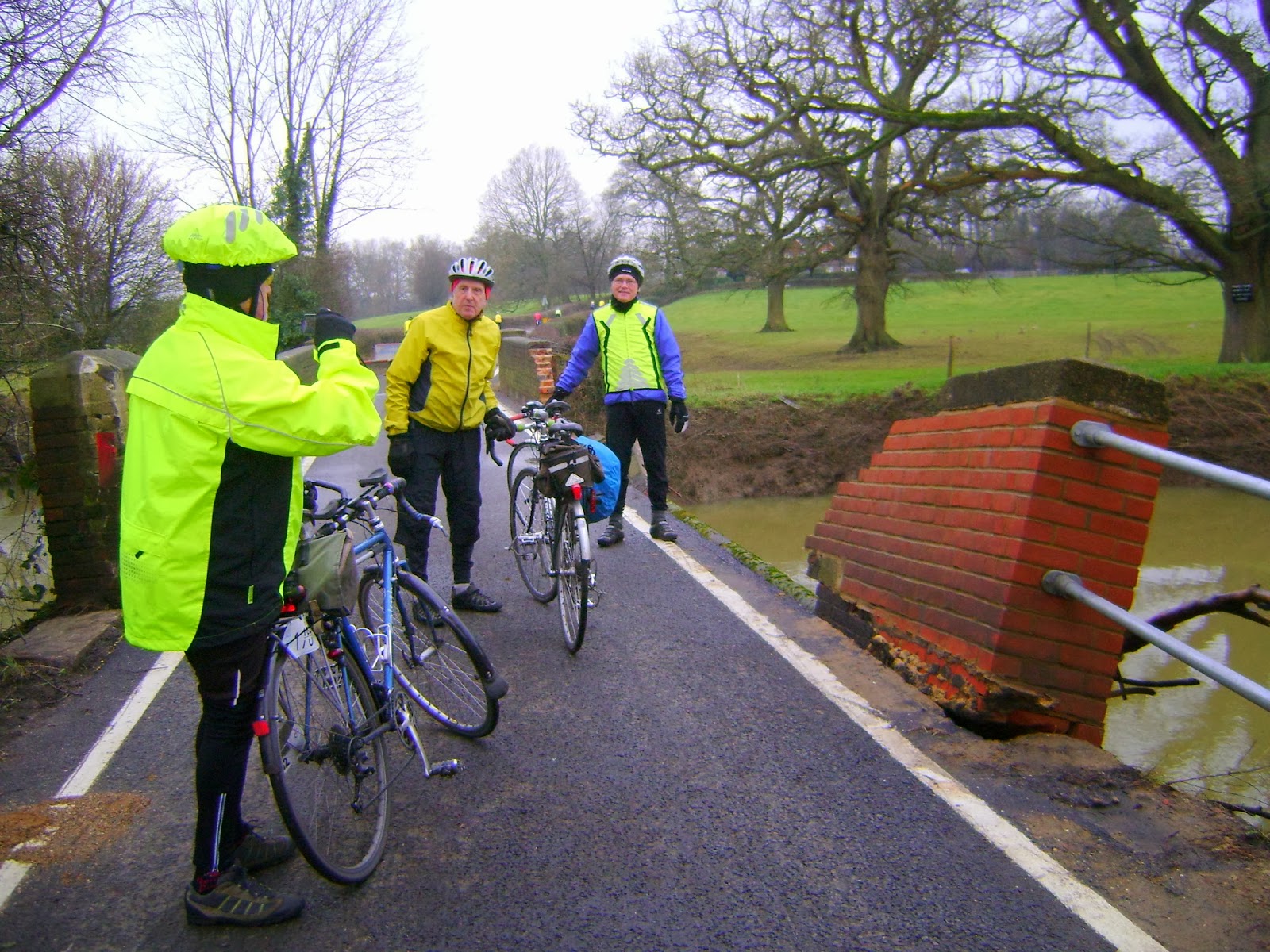 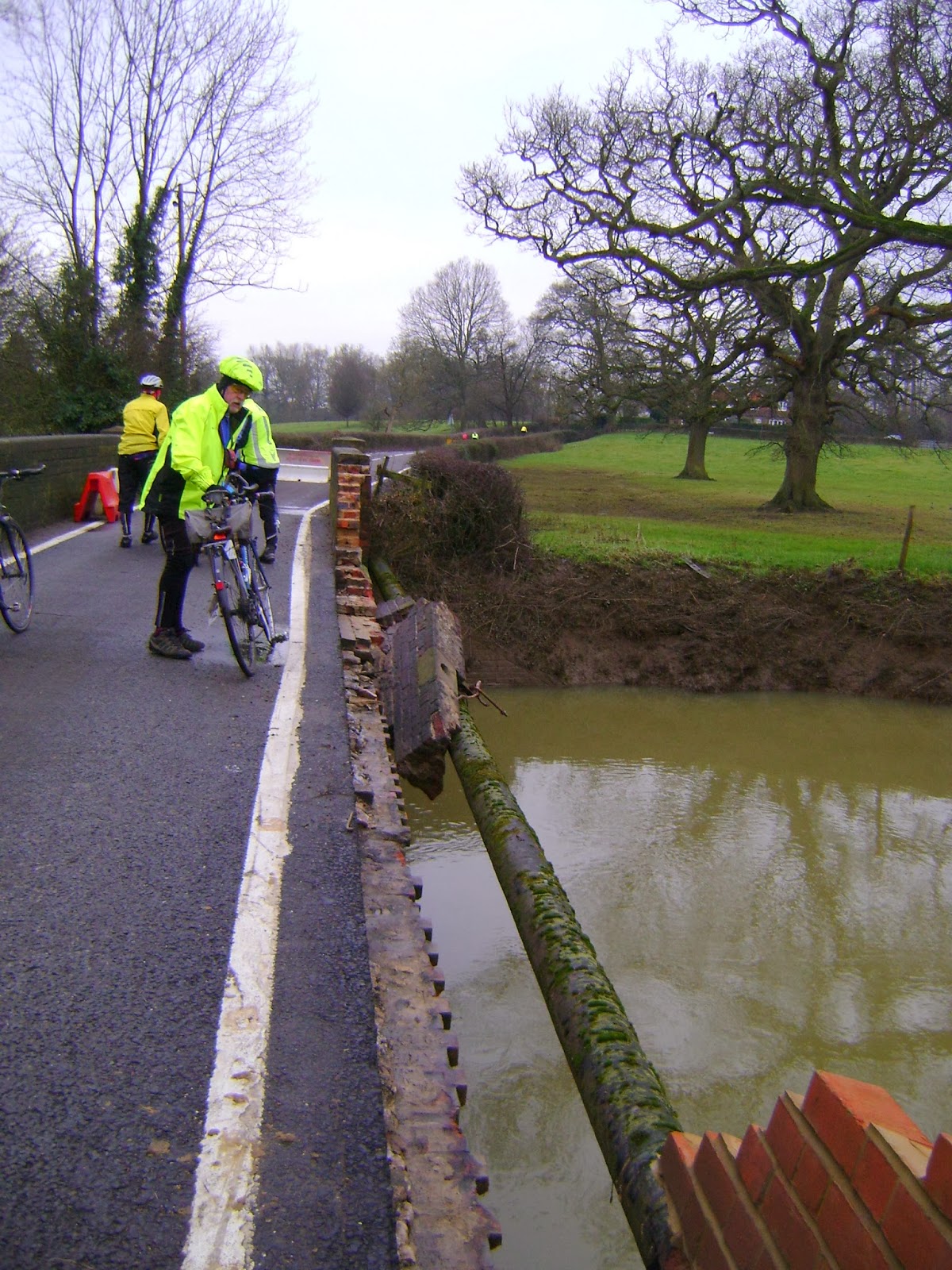 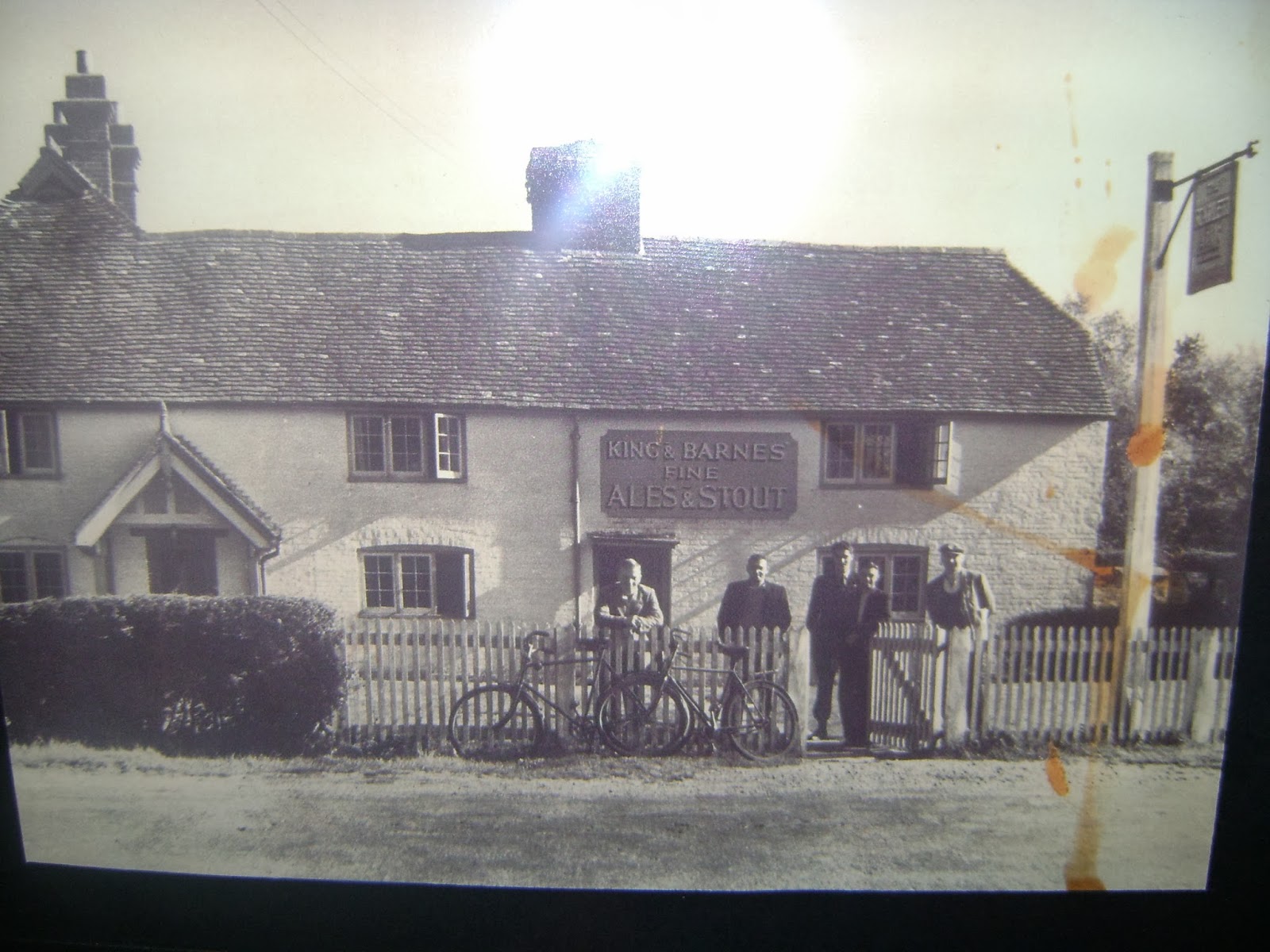 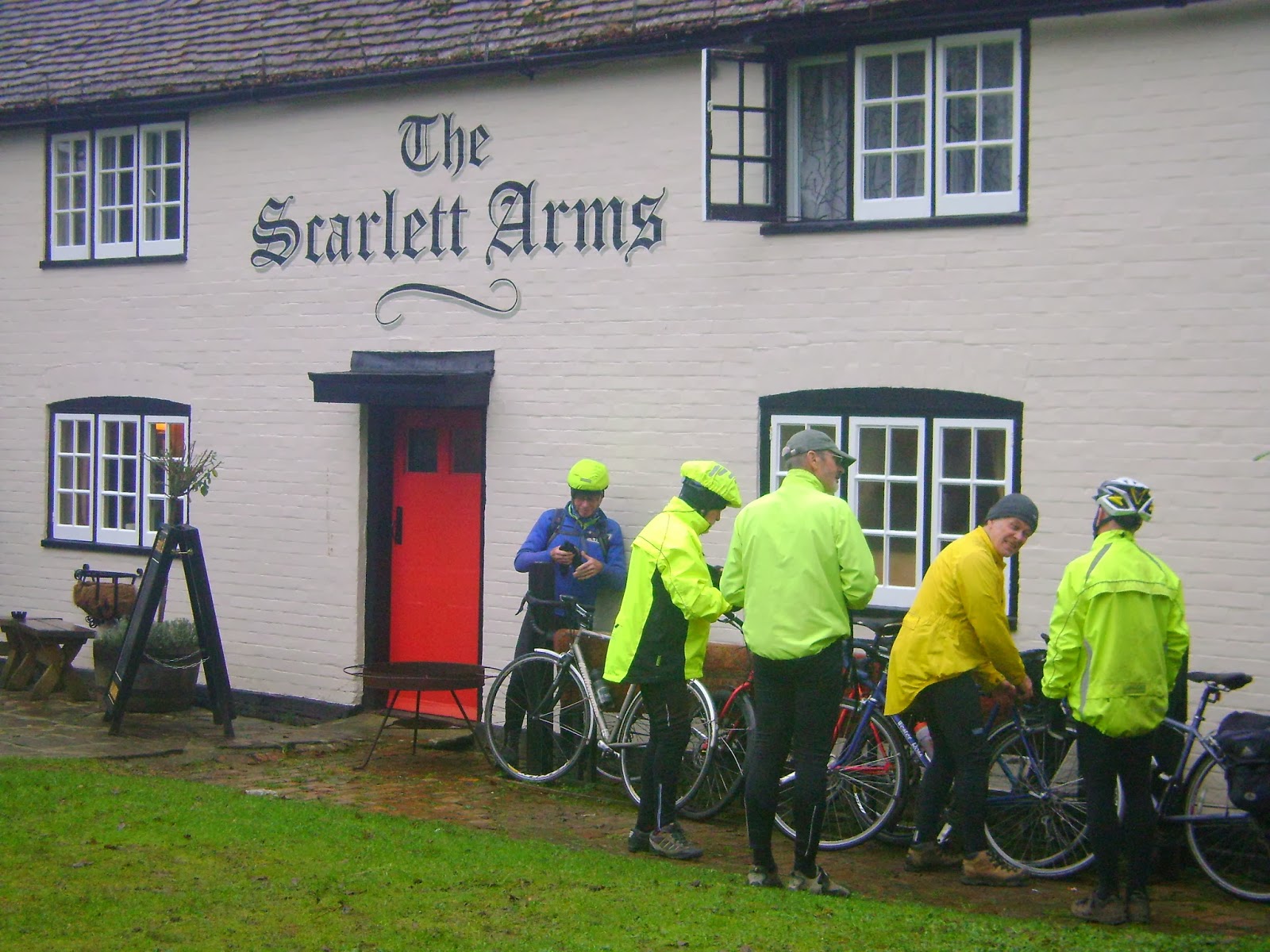 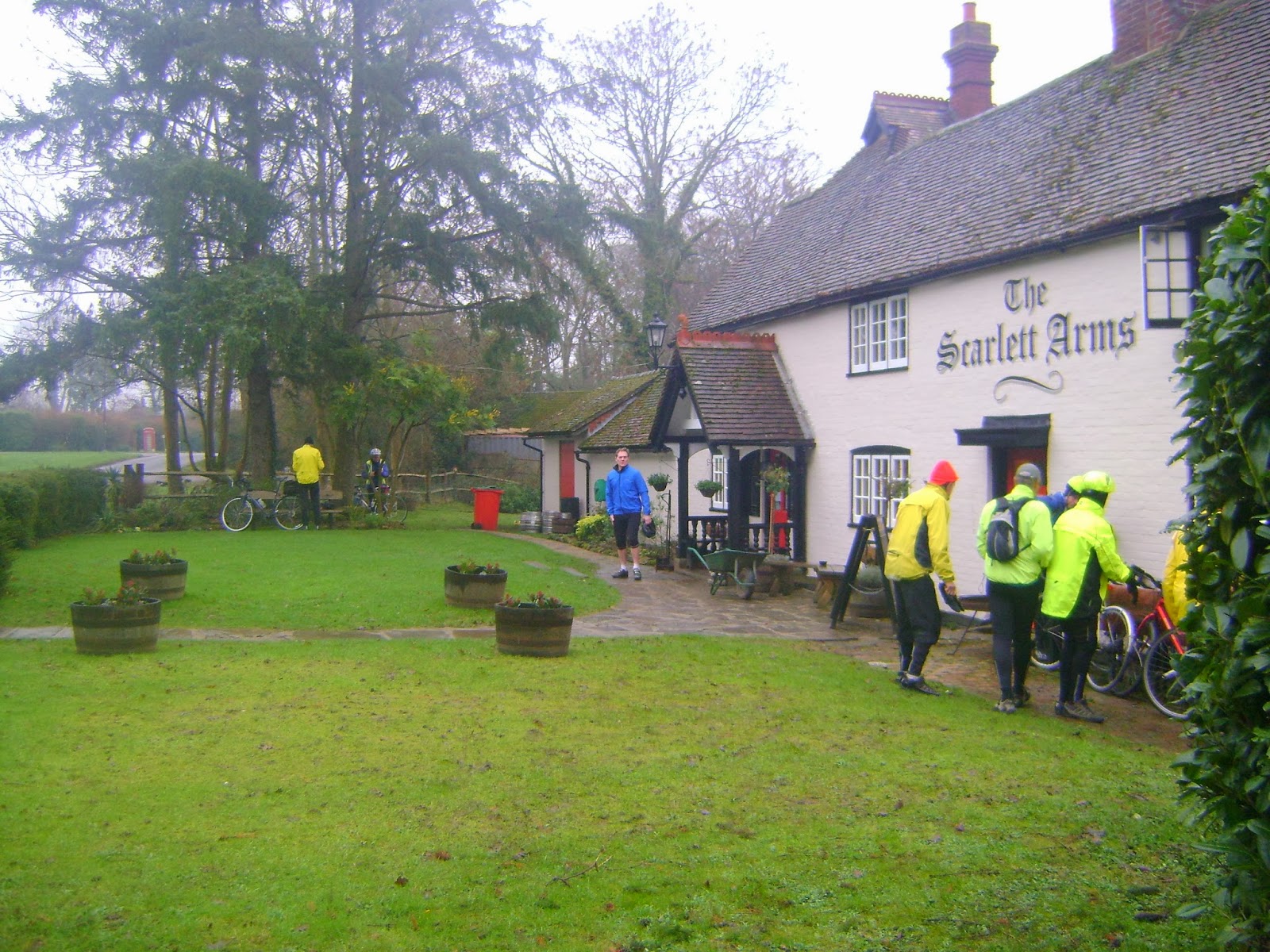 I awoke to white roofs but as the sun rose, they darken so no repeat of two weeks ago seemed likely. In time it became damp and overcast, neither too warm nor too cold as long as one was on the move.

I was a late arrival at Morrisons but not the last nor did I order full English! A surprising fourteen were eager for more; the belated departure setting a pattern for the day. Before Xmas the upstream parapet of Flanchford Bridge disappear into the Mole. My earlier in the day recce found the road still closed except to those who ignore signs and are happy to bypass concrete barriers. So outward it was Leigh, Newdigate, Capel, and Oakwoodhill.

An unheated and thus empty room awaited us at an otherwise full Scarlett Arms. Most tucked into something warming but the soup had to be returned being more like Vichyssoise. For some, the range of real ales just had to be sampled. After lunch the group began to fragment. Ian headed home, Daniel and Keith decided on Leith Hill (via Tanhurst and Leith Hill Place respectively). For the rest, it was Ockley, Capel, Newdigate and Henfold to Denbies where just five sampled the cakes. 65 miles door to door and a late finish of 1740.
Posted by RaasayWarden at 08:50 No comments:

Bridge on the River Mole 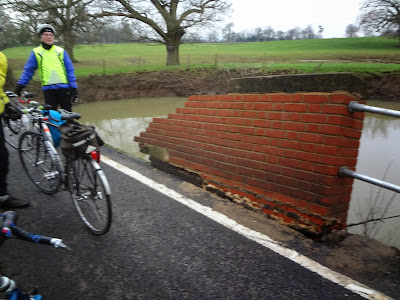 Resulting from the aforementioned pow-wow, potential ship captains may wish to note that Plough Lane Cobham and Orestan Lane Effingham are currently under water.

Longer term the notices are up regarding repairs to the three bridges close to Newark Priory. Newark Lane will be closed from now until July. For more details see 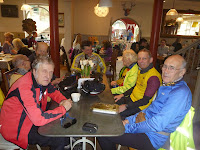 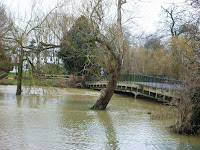 Tillings at Gomshall was the centre of gravity for elevenses, where it was so noisy that you could hardly hear the till tinkle. Andy take note: cup of tea £1.95 - you would not have been happy. The Met Office severe weather warning for ice might have been a little over-egged,  but with floods forecast for the afternoon, the C&M pow-wow decided that  Leatherhead might be a wiser destination  than Ewhurst. As we passed the River Mole on the way, we noted that the ice had thawed a little. Refuge was found at the  Wetherspoons known as the Edmund Tylney, named we are told after the Master of Revels to Queen Elizabeth I and King James I, which had been converted into a flood relief centre, where beverages and all day breakfasts were provided to those forced out of their homes. As rain began to fall, we all set off for an early bath. The captain's log recorded 32 nautical miles. 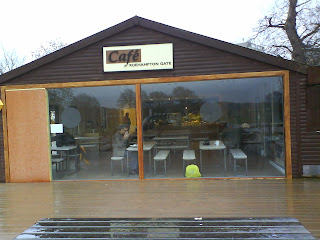 Thoroughly miserable with heavy rain from morning until late into the night.

I was first to arrive (1045) at the refurbished but almost empty Roehampton Gate cafe soon to be joined by the car-borne Powneys and Squirrels. In dribs and drabs they came, the Beers, Steve and Ann, Frank C, Dave V - too many to recall. By the time Ed arrived the joint was jumping! His merry band had tried offroading beside the Hogsmill only to discover fallen trees and gloopy mud.

I set a noon deadline and soon after a dozen unenthusiastic riders set off in search of puddles. After a blustery Pen Ponds to Ham Cross, we bade farewell to the homebound Paul before plunging down through Ham Gate. This year's route was a mix of new, St Luke's (to please any High Anglicans) and Hawkers (the original site thereof), and old (alma mater, Norbiton station, Woodies, Cuddington church but showing mercy not Royal Avenue).

Just eight (three C&M - Ed, Helene and myself) made to it to lunch where Ed got his priorities right - heat aplenty, then hot drinks, then food. In time we were joined by Maureen, Cliff and later Daniel. As in previous years, Ed's cakes and finger rolls were complemented by Maureen's savouries. As the light faded, we went off in our various ways in search of ever larger puddles.

Naturally the following day was wall to wall sunshine! Below are contributions from the new SWL secretary 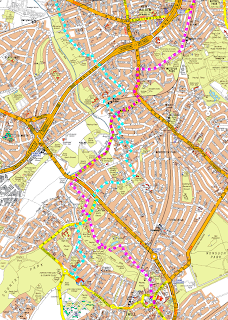 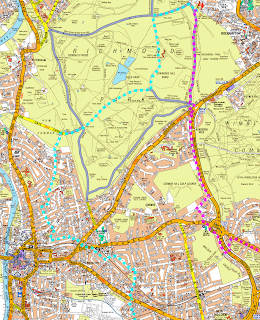 Posted by RaasayWarden at 11:10 No comments: