Our leader Irene took us through highways and byways known only to her from Dorney to Hurst for a challenging children's lunch with a cocktail of ice cream to follow. 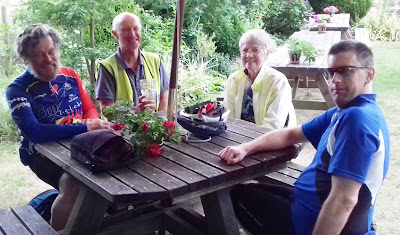 The children's menu was more than some could take, but the leader put on a brave face and all put on a smile (well, Paul nearly did) in appreciation of a lovely ride.

DORNEY COURT GC  - THE GREEN MAN  HURST - CAFÉ NORTH  STAINES.
Bob, Ed, Dave, Chris, Graham, Paul, Alan, Jeff & Irene met up at the Dorney Court G.C, for tea, coffee & cakes.  At 11.15 am Bob, Alan & Ed returned home while six went on to lunch.  We turned left out of G.C. to Dorney Reach, then onto route 4 over the Thames before turning left past Bray Marina to A308.  Here we went straight over to Fifield and right onto B3024 to Paley Street and continued through Shurlock Row to Hurst for lunch. Three partook the childrens' menu which came with ice cream for dessert (lovely).
We returned past Billingbear Golf course to Moss End then across Ascot Racecourse to Windsor Great Park. We left through Bishopsgate to descend Tite Hill. Dave, Paul and Jeff pushed on for home leaving just three for cake and tea at Café North in Staines.
Thank you for a very pleasant day. The rain tried to spoil it at lunch time but decided to wait another day.
Posted by RaasayWarden at 07:55 No comments:

The lunch venue for the 25th of June has changed to:

As Tony (et al) are "raiding", here's early warning that 11s will be at Elm Nursery. Sutton Green GC is on the A320 whereas the (near adjacent) Nursery is on the more cyclists friendly Sutton Green Road and has a children's farm! It opens from 1000 on Sundays.

After 11s, the ride continues via the Railway Station and Wetherspoons so you could join in Guildford town centre but do email in advance.
Posted by RaasayWarden at 07:27 No comments:

The hottest day of the year so far:  Ten of us went to Chertsey for elevenses, but only eight found the Chertsey Café.  We found Ed and Bob in a café just up the road, which might have been a cooler option, as the Chertsey Cafe is in an arcade which is built a bit like a greenhouse.  Margaret & Bill, Bob, Ed, and Alan were not joining us for the ride, leaving just five of us to brave the heat.

We headed across to Lyne and then around Virginia Water, seeking shade, emerging from Blacknest Gate to climb up to the mighty Peanut roundabout.  Then downhill all the way to Fifield, and across the Thames to Dorney, where we cycled along Dorney Lake and mostly tarmac'd cycle track towards Eton.  Irene suggested a quicker route into Eton itself which worked well and got us to the Waterman's Arms a couple of minutes after one.  We found tables reserved for us, outside but with some shade, and after a lengthy wait to order our drinks and food, the food came very quickly and we were away by just after 2pm.

Still, it was still a still, hot, sticky day (see what I did there?) - 32 degrees in fact - so we took it easy along the river and along the cycle track back to Windsor Great Park.  There was a glimmer of hope that we might stop for ice creams at the village shop, but it's shut on Sunday afternoons, so we enjoyed the views over Windsor and pedalled on.  Graham suggested a diversion to Runnymede for tea and ice creams, which worked out very well.  After tea Irene took us to see the nearby sculpture (or is it an installation?) called The Jurors, marking the 800th anniversary of the Magna Carta.  And I now know where it was signed.  At the bottom, of course.

Elevenses this Sunday will be at the Chertsey Café, a new venue which is not easy to find ... and NOT where the link on the rides list pointed to until a moment ago, or where Google Maps takes you to if you search.   The correct location is here.
It is in an arcade, the Sainsbury Centre, just off the main shopping street, which is called Guildford Street.   On the left, about 100yds down the road, just after the scaffolding, and before the King's Head on the other side.   If you have difficulty, call me on 07952 932 823, or one of the other riders, and we'll come and find you.
Posted by Simon L at 15:56 No comments: 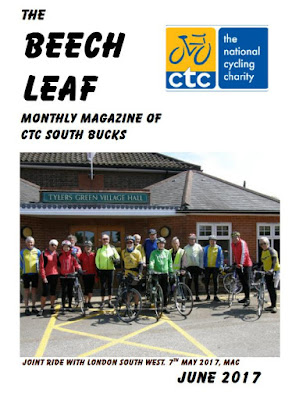 The month started with one of the highlights of the year; it is is the third year of our spring time rides with friends from  the  South  West  London  group, who  had  ridden  up  from  the metropolis  to Hampton  Court  and  then  onto  Black  Park  for  11s.  Sadly,    Chiltern  Hills  could  only muster two (Barry and JC) to join them, but we were soon welcoming Robert, Peter E. Fred  and  Baldrick  from  the  Thames  Valley  group  as  well  as  eight  riders  from  S.W. London.    It was great to resume old friendships with Tony Hopkins and company, many of whom regularly attend the Golden Beeches rally each October. After refreshment and chat, we set off for lunch at Tylers Green Village Hall.

On these events, we try to show our visitors  the  best  parts  of  our  area,  avoiding  the  main  roads,  skirting  the  towns  and housing estates and using a selection of the prettiest lanes in South Bucks. From Black Park, it was up to Langley Corner, we avoided Fulmer and Stoke Poges, up Gipsy Lane to cross the A355 at Egypt, into Harehatch Lane, down Ship Hill, turn left into Green Common  Lane;  is  there  a  prettier  lane  in  the  County  when  the  bluebells  are  out? Lillyfee  Farm  Lane  and  Whitehouse  Lane  (down  White  Hill  on  the  A40,  opposite  the former Mother Redcap pub)must run it close and were also part of our route. So we ended up at St Paul's church in Penn, from which it was but a short ride to Tyler Green, there to be greeted by some of our regular Coffee Potterers – John & Wendy, Audrey, Eleanor and Jane together with Mac, who had just got back from acontinental holiday.

Catering  was  provided  by  Cilla  and  Simone;  an  excellent  buffet  lunch  comprising
sandwiches and homemade biscuits from Cilla, with quiches, sausage rolls, crisps and cake which Simone had purchased plus plenty of tea and coffee, all generously funded by Chiltern Hills club funds. A collection was taken for the Air Ambulance, which yielded over £60. So a successful and enjoyable day and thanks to everyone who took part, especially Cilla and Simone for the catering. Next year, it is S.W. London's turn to hostthe  event  in  their  area  and  I  would  strongly  recommend  as  many  South  Bucks members as possible take part.

A week of blustery weather had brought sun and shade in equal portion (and minor destruction) but didn't deter the fifteen (and two squirrels) who showed up at the Vineries. By 11 we were ready. Four (Bob, Dave, Don and Ed) headed home while the rest took an obvious line (Orestan Lane, Coombe Bottom, Albury). After the rough section from Surrey Hills, we regrouped at the closed Chilworth level crossing before climbing past the monastery. An ETA of 1230 left time for the detour via Lordshill Common. Just short of the lunch the P. fairy struck down Jeff; I turned to investigate. Others soon found out that the Bricklayers offered full roasts only (contrary to advice when booking) so they settled for the alfresco Red Lion, and a surprise reappearance from Ed! 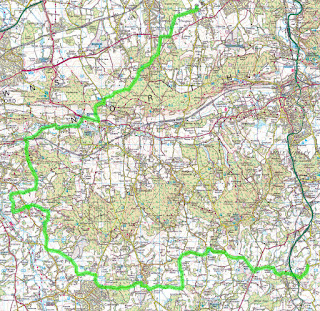 The initial way back was towards Farley Green. At the first turn, five continued but six headed along Stroud Lane back to the main road. We crossed Smithbrook Common and round the back of Cranleigh to Park Hatch. With no need to rush, I picked out a "uneven surface" near Lower Breache Farm before returning to B2127/B2126 for the last miles to Capel. The stop was gloomy but the sun reappeared on the ride home. About 65 miles door to door.
Posted by RaasayWarden at 07:53 No comments:

We are contacting you in your capacity as Rides secretary of the Cheam and Morden CTC Members group because we have had property handed in that we believe belongs to one of your members.

A green rucksack dropped off an elderly male cyclist’s pushbike on Sunday 4/6/17 whilst travelling through a road in Fleet and from the paperwork inside we believe they are a member of your group.

We were wondering if it was possible to message the participants of this ride in the hopes of re-uniting the loser with their property. Should anyone identify themselves as having lost this item, please could the in the first instance contact Hampshire police on 101 and ask to speak with Aldershot Front counter quoting ref number 44170212209. 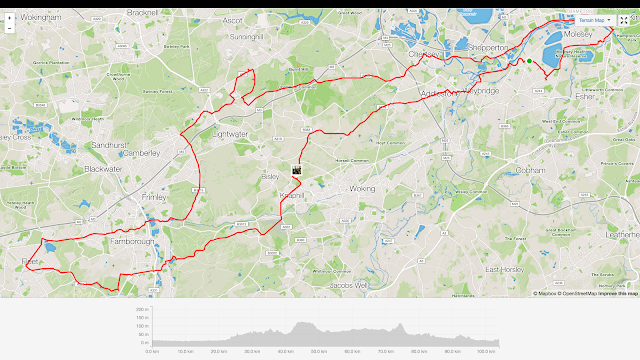 Alan, Chris, Don, Graham, Ed, Lillian and I met at Hampton Court and picked up Ray Wren en route for Windlesham.  There we met Irene, Pam and Vic and had a pleasant alfresco 11s (a bit fresh in the strong breeze)!    All but Don and Alan continued to lunch via Bagshot, The Maultway, Frimley Green, The Hatches, and a dodge round the back of Farnborough, via Prospect Park and Minley, to Cove.   Terry and Bob joined us at the Prince Arthur at Fleet and lunch was well up to Wetherspoon's standards.  The £4.99 Manager's Special was especially appreciated by several members!

We set off again under threatening skies and a few drops of rain but it did improve as we skirted the south of the RAE via the Basingstoke Canal towpath, a traverse of the Army Golf Course, and some quiet, wooded lanes between military establishments.  Vic showed us army huts deep in the woods where he had once been based.  They reminded me of my old junior school which was originally an army hospital in the war.   A cycle route allowed us to sidestep the traffic through South Farnborough and North Camp to Mytchett, and the ascent of Tunnel Hill was rewarded by a long freewheel towards Brookwood Cemetery.  We stopped for tea at Mizen's Railway, Knaphill where there was the traditional parting of the ways.

Many thanks to all who took part and I hope the ride was enjoyed. Dave

Posted by RaasayWarden at 08:59 No comments: