Despite the early start time, Graham, Daphne, Don C, Ed, John M, Keith, Pete C, Richard and Simon showed for the 4th "nearly 100". Epsom, Leatherhead, Bookham, Effingham and Netley Heath lead onto Shere when Pete B was met by prior arrangement. As luck would have it, this was the chosen route for next week's ride - back to the drawing board, Simon! Farley Heath and Rowley came next before we rolled into Notcutts Cranleigh. Bob had turned up but the tea shop did not open until 1030. A quick decision settled on Bricks, Smithbrook Kilns which many had not visited. This proved far enough for Bob, Daphne, Pete C and Richard. So a motley seven headed for Dunsfold, Plaistow and Kirdford. Trying to outdo Ed, Little Bognor was next but no, he'd been there. The untried Hesworth Common route remained untried and via Coldwaltham and Rackham it was to lunch at the Sportsman, Amberley. There was no KPRC rendezvous due to the England-Ecuador match (can this be true?). After the ups and downs of the morning, a "flat" route home was much appreciated: Nutborne Common, West Chitlington and Barns Green. A Family Mega (Mega Family?) Fun Day in Horsham Park meant an alternative tea was taken at Tanhouse Farm, getting there just ahead of a bunch of Velocette bikers. After that it was each to his own; I totalled 103 miles and was home by 1730. It had been a sultry day, frequently overcast but a late threat of rain never materialised.

Happily last week's victim remains in good health but the perpetrator was buried at sea (more accurately, tossed in the Colne) last Monday. Irene is open to offers on an unopened packet of rat poison. 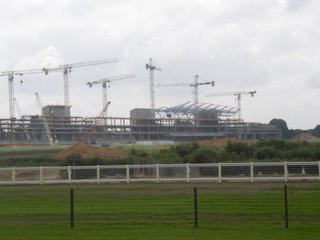 Sunday June 18th found Bob, Grant, John, Leader Irene, Graham, Jake, Pete Mathews, John M, Pam, Terry, Ed, Simon L, Lisa & myself at Fairoaks in warm sunshine soaking up the small airfield experience, Irene led us on a well thought out and executed route past the Ascot Racecourse poised to open in two days time after a massive rebuild. Lunch at a busy Leathern Bottle at Jealott’s Hill followed by a lovely ride through Windsor Park to drop down to Fruit Cake and tea at Irene’s at Staines. Being by the river we were introduced to a friendly water rat living close to the small garden, who upon meeting Graham nibbled his toes – probably due to seeing a preview on the C&M website!
Posted by Pete at 18:44 No comments: