It was a lovely morning and a baker's dozen of us (Don Clarke, Bob, Vic, Graham, Ed, Lillian, Alan, Pam, Maureen, Jeff, Brian Bent, Ray Wren and me) met for elevenses at West Horsley.

Maureen, Jeff, Don, Bob and Alan didn’t join us for the rest of the ride and Brian left us en route. We ‘roughed it’, for the first time in a long while, over Merrow Downs to One Tree Hill then tackled the blind bends and ups and downs of Halfpenny Lane while alpacas gazed on impassively.  After Blackheath we made a short detour into the cemetery where Vic showed us a stylish cyclist’s grave.  The customary, benettled sewage works path from Shalford led us smartly to Wetherspoons at Godalming. 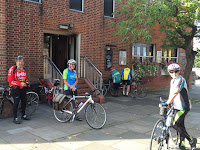 After lunch we stopped to regroup by Nightingale Cemetery in the dizzy heights of Farncombe.  Through the railings Ray noticed that, by an astonishing coincidence, we had stopped exactly opposite the grave of one John George "Jack" Phillips, senior wireless operator on the Titanic, and now honoured with the ultimate accolade by J D Wetherspoon, no less! 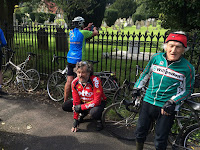 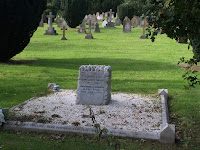 The onward route was by Littleton and Mount Browne to Guildford, very pretty but on reflection perhaps a little harsh given the climbing we had already done (my Strava said 831 metres of ascent for the whole ride home to home but this does include one footbridge).  Then it was straightforward stuff, dodging the main centre on the path between railway and cricket ground then taking the customary route to Ripley.   Many thanks to all for another very pleasant and trouble-free ride (barring the near loss of one valuable season ticket) in excellent company!

Dave W
Posted by RaasayWarden at 08:45 No comments: 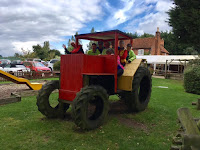 Well it wasn't the balmy late-summer ride that I'd imagined.   Sunday was a day for knocking the icicles off your bike before leaving the house - grey but thankfully windless.   We huddled in the Golden Café for warmth and nobody seemed in a hurry to venture out.  Eventually we set off leaving Maureen, Alan and Bob plus Margaret and Bill to return home from 11s.   Familiar roads through Lyne led to a risky detour through Wentworth - past the clubhouse in fact - trying to act as if we had left our golf clubs with the caddie.  But we got away with it, riding through across Ascot Racecourse to arrive at the New Leathern Bottle just before 1pm.    The pub looked strangely familiar - and then I remembered: we had been there on Neil's ride, only the previous Wednesday.  We were served good food very quickly, opting to sit indoors as it was still cold. 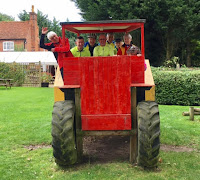 Then came the most dangerous part of the ride: climbing into the play tractor for a photo, before heading back through Maidens Green and Cranbourne towards Windsor Great Park, dodging the crowds around Virginia Water (the lake) and exiting towards Virginia Water (the village) on the way to Great Cockrow, site of the miniature railway.   Decision time: should we brave the outdoor café at Great Cockrow, or play it safe by going back to Addlestone?  The lure of the nearby café won the vote.  While we were there the sun came out for the first time, making it almost warm.  On the way home from tea we had a couple of heavy showers, which I hope most will have missed.    32 miles from 11s to tea: a very enjoyable day out, but definitely autumnal. 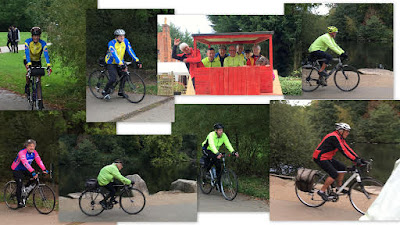 Welcome to Geoff Gregory who joined the C&M for the first time, and thankyou Geoff for back marking and taking photos. 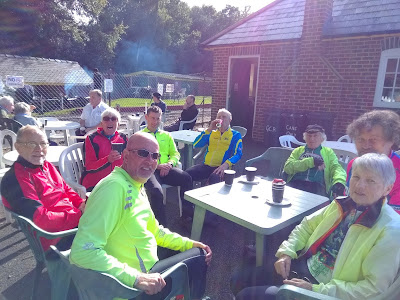 Please note.
The lunch venue next Sunday, the 17th, will now be the New Leathern Bottle Jealots hill.
Tony..
Posted by Tony at 07:18 No comments:

Nine greeted Pam, Alan and myself when we arrived at Squires GC for 11s. It was quite a dull day so we anticipated getting wet!!!  After Alan, Bob, Margaret and Bill left, eight (Simon, Ed, Terry, Pam, Vic, Graham, Brian Bent and I) started our ride to Guildford turning right out of the garden centre, over the railway bridge then left into Station Road. A first right into Bray Road led to River Lane and offroad into Downside. We continued on Chilbrook Road and Ockham Lane and over Hungary Hill. After crossing the A246, Staple Lane was climbed and Coombe Bottom descended to Albury and Chilworth before a right turn into Hornhatch Lane and over the level crossing. After Shalford Lane a right turn into Tilehouse Road led us to the Pilgrims Way. We used the cyclepath alongside the A281 into Guildford town centre. Finally the lowest part of the High Street and a right turn into Quarry Street brought us to the King's Head. There to greet us were Ray Wren, Vic and Ed. Unusually they serve sandwiches and baguettes on Sundays.
On leaving we walked through the lovely castle gardens which are a picture throughout the year. They are on three levels, flower beds lead up through a lovely tunnel to a second level where bowls were in full flow and then up to the top level which has a bandstand. A brass band was playing; it would have been great to have stayed a bit longer. We continued to the High Street and its cobbles and rode on past Stoke Park, and down to the cycle route on the A3. After passing the Jovial Sailor we turned right into Grove Heath Road and continued to Painshill Park and its lovely tea shop which stays open until 5 on Sundays. Although threating all day , rain didn’t materialise until evening.
Thanks everyone for making it a trouble free day and thanks for the company.
Irene
Posted by RaasayWarden at 08:52 1 comment:

I got to Hampton Court a tad early to find Ed already waiting with Graham arriving minutes later. Off through Hampton, Hamworth, Feltham  Bedfont and back roads to Colnbrook where Irene and Niall were waiting. Back roads again and Iver, Cowley and on to 11's the Rusty bike Cafe. Just after we arrived a friend of mine (John Hare) from Uxbridge arrived showing Mick (Furnival-Adams) the way to the cafe from Uxbridge station.

Tea-Toast, Coffee-Cake in the light Sun and off by 11. A nice little climb up to Iver Heath and past Pinewood studios. Fulmer, Stoke Common, Hedgerly and past the White Horse pub, a C&M favourite, and a loop round to Gerrard's Cross and back roads to Chalfont St Peter and a left turn into Welders lane and a brief stop outside Ossy Osbourne's estate and past Jordan's youth Hostel and onto lunch at the 3 Horse Shoes, Seer Green as the rain started to increase.

I had booked a table and we had a nice comfortable booth. Orders for drinks and food were taken quickly and arrived just as quick, 4 had the childrens roast (must be big children in Seer Green!) and 2 had soup. Off into the light drizzle to Chalfont Chllafont St Giles and into Bowstridge Lane back to Chalfont St Peter and the stiff little climb up Chiltern hill through a private estate. Then Denham lane down to Denham and past Sir John Mills old house and through the Golf coures back to Uxbridge. At this point Niall and Mick left us to take the direct route along the Uxbridge road to Isleworth and Kew receptively.

It was felt that Moniz cafe at Cranford was to far East for some so Vermeulens was the next choice. On reaching the cafe and finding it closed, it was only 3.50, Irene decided to head straight for home and Ed, Graham and myself headed for Ashford and a pub or cafe there. Graham left us just as we reached Ashford and Ed and myself found a Cafe Nero still open and settled in for coffee and cake. On leaving the drizzle still continued and me and Ed parted company, I headed for Bedfont and the Staines road nearly all the way home. In spite of the weather a pleasant day on the bike with a good crowd. 73 miles door to door.