Change to 11's for Sunday the 3rd of August!

11's will now be at Dorney Court Kitchen Garden Centre
and NOT Bolters lock (Jenners cafe).

The ride will need to leave 11's promptly. Ryka's bikers' café at the foot of Boxhill was Sunday's novel congregation point. This provided a relaxed downhill for the leader, not quite the last to arrive, closely followed by Neil, sporting a new brilliant orange shirt, with glowing cheeks to match. After allowing a decent five minute margin of error for possible late arrivals, we turned our backs on the temptation of the zigzags and headed  along the cycle path for Punchbowl Lane and a steady southward spin to Newdigate and Rusper, then crossing the rail-tracks at Warnham for Broadbridge Heath and the new bricks and tarmac of Newbridge, absent from older O.S maps. There may be a hint in the name. Newbridge Garden Centre, beside the River Arun, contains an unsuspected pearl, a gastronomic hybrid tea named Stooks. Add it to your tea-stop database; you may cycle far to match it. 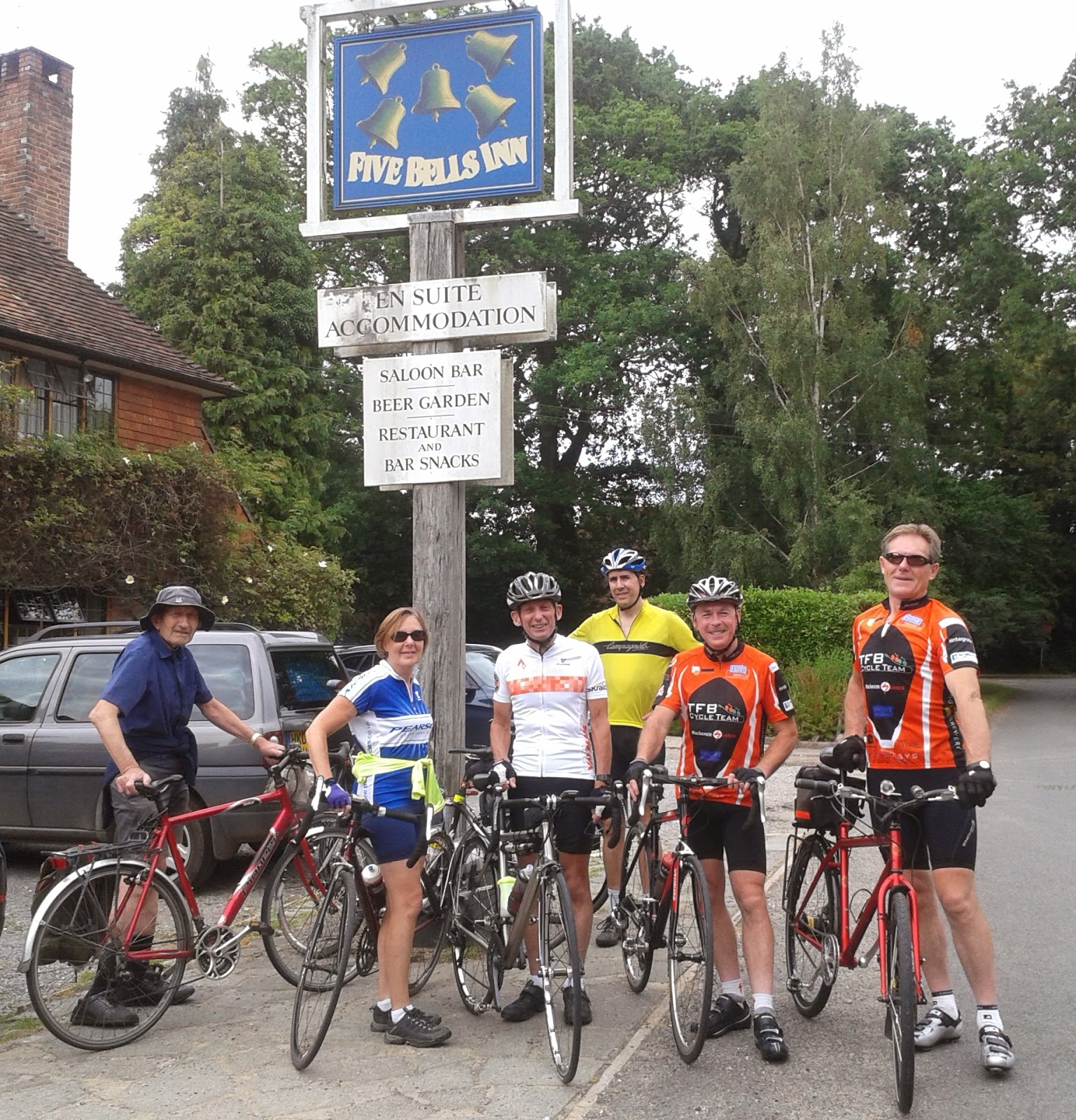 A light shower did ruffle our late breakfast but soon passed. Graham arrived for tea but departed with Ed and Terry, while the rest of the group set off via Bashurst Hill and West Chiltington Lane along many a mile of undulating lanes to arrive at the village of W. Chiltington and soon thereafter at the minimalist Smock Alley and the Five Bells. We arrived early; the pub was not busy but the eccentric 'patron' still found serving an almost insuperable challenge. This is the only pub that I know that serves sardine sandwiches, bravo! When Pete (TFB) F was asked which cider he wanted, he asked for the one which came out fastest! Daniel ordered a plowman's, appropriate for Smock Alley, not his usual roast, but could not resist the challenge of a 7% cider, which fortunately did not leave him legless for the return. We dined in tranquility in the secluded garden with no climbing frames or children, though Neil said 'no' to food in anticipation of a 2pm BBQ in Guildford. We hope that he arrived in time for more than a burnt offering.


Our pretty direct route back was via Coolham, Brook's Green, Barn's Green and  Itchingfield, with no takers to visit the Parish Church of St Nicholas. We then retraced our route from Newbridge through Warnham and up Friday St. to the cake-laden tables of the Church of St John the Baptist at Capel. Who there should we meet but the trio of morning escapees: Ed, Graham and Terry, already rather cake-bound. Soon refuelled and refreshed, with eyes half-closed, we made Godspeed through Newdigate to Dorking, where from the Friends Provident building, each set his own compass bearing for home and hearth. Apart from a few drops of rain in the morning tea, the weather had been warm and clement with roads dry for a pleasant 70+mile  Sunday canter, which I hope the frisky group found as enjoyable as I did.

Seven left Hampton Court this time without incident(!) though we soon ran into traffic heading to the 30th Barrio Festival in Walton. After the towpath under Walton Bridge, we were joined by the ladies in Addlestone. Brox Road and the A320 provided a northern bypass of Woking. From Pirbright it was up and over to admire the Empress Eugenie's contribution to the Farnborough skyline. Richard and Terry were at The Tilly Shilling having come via Gatwick Express. 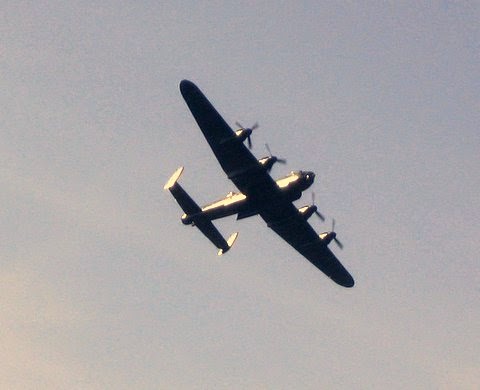 The onward route was somewhat more urban than our norm and paralleled the mainline (and M3), admittedly none too closely. Cove, Fleet and Winchfield and a final two miles dash along the A30 brought us to The Hogget near Newnham where Bob was waiting. Prompt service meant we could depart just after one thirty on a more relaxed and more rural route through Newnham, Rotherwick, Mattingley and Phoenix Green. We rejoined our outward route in Winchfield Hurst to be plagued by high flying birds over Farnborough. 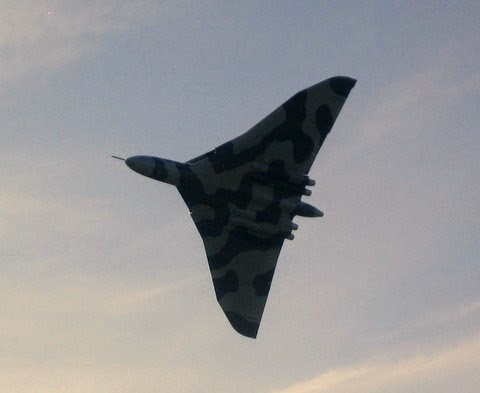 There were minor deviations from the outward route here, and in Frimley Green and Pirbright which brought us close to the relics of Saint Edward The Martyr. Bodies now began to disappear though  most reached a new teastop, Mizens Railway, northwest of Woking.

Cooler than of late but somewhat clammy with spots of rain as I crossed Kingston Bridge. 80 miles door to door at a spirited pace. 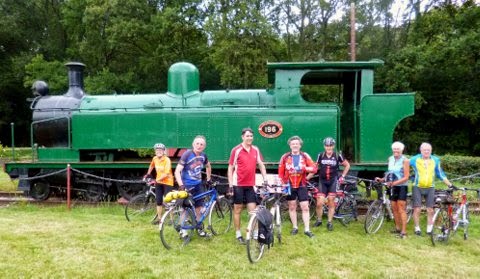 Posted by RaasayWarden at 08:20 No comments: 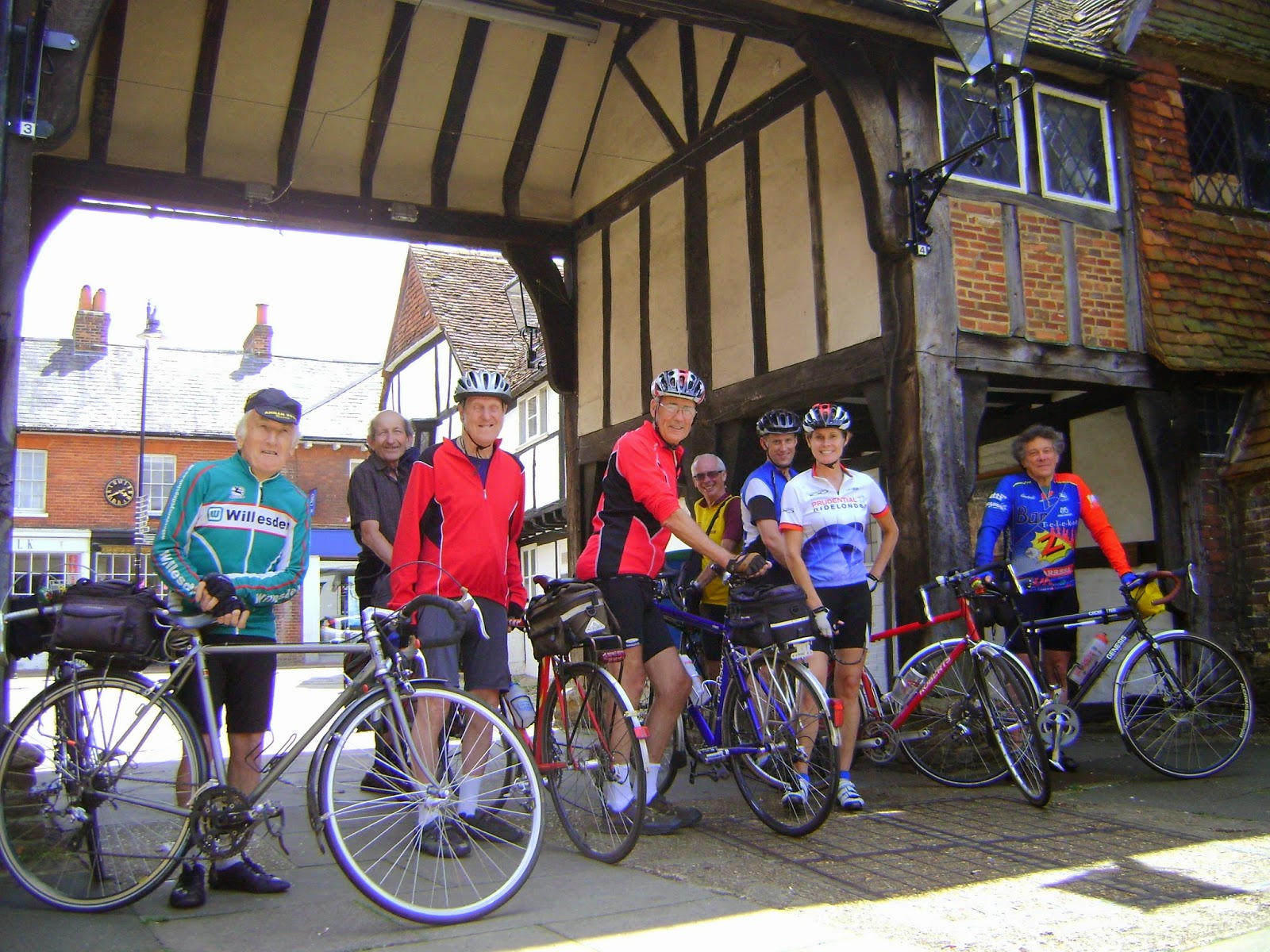 There has been a café at the top of Newlands Corner for over 50 years and although closed for a number of months,I did find this on the internet: 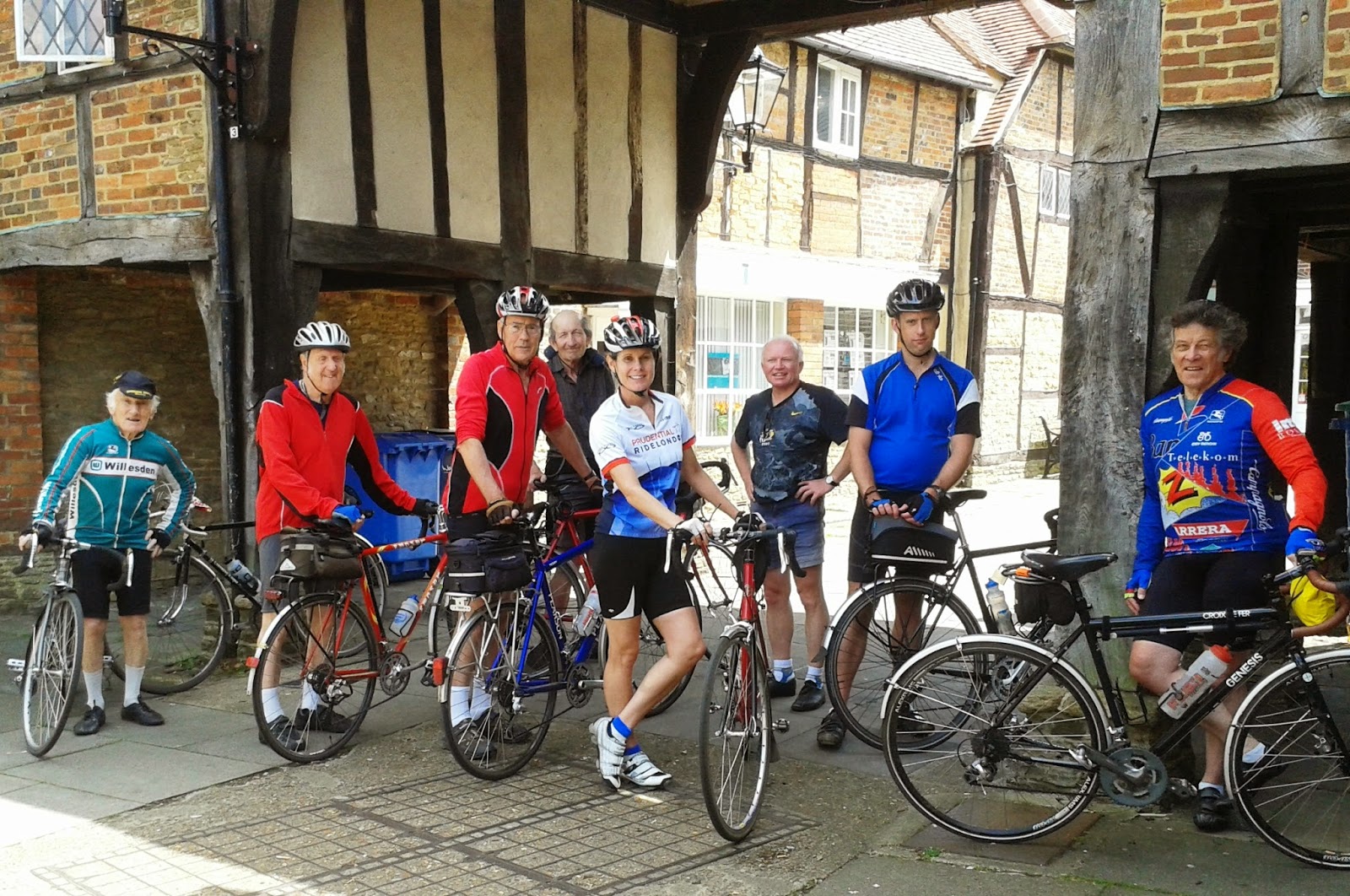 After lunch beneath the mediaeval Wetherspoon's Arch
Posted by Jeff at 13:19 No comments:

After briefest of showers just before ten, the weather just got better and better. Three of us arrived at Squires East Horsley before opening time! Soon it was four and eventually it became a dozen.

Ed, Terry and Bob opted for an easy route to lunch whilst seven headed for the hills. First on the menu was Shere Road and Coombe Bottom. Then it was along to Silent Pool and more ups and downs to Shamley Green via Farley Heath. NCN 22 is paved except it dips down to the canal and under the Downs Link so we struggled briefly to reach the A281. This is not a favourite of mine but soon we were along Brockwell Lane and Thorncombe Street and up Alldens Hill with just two cars to impend our progress. With time in hand we continued offroad past Gertrude Jekyll's house. It was no surprise to find the easy riders sunning themselves outside the Jack Phillips in Godalming.

Lunch and tea are separated by only eight miles so I stretched by meandering through Farncombe, past the crematorium and round the back of Chinthurst. At the Chilworth level crossing Jeff and Janice were for home via Coombe Bottom whilst the rest faced Halfpenny Lane before welcome refreshment at a very busy Newlands Corner. About 55 miles door to door.

The Blue Ship at The Haven 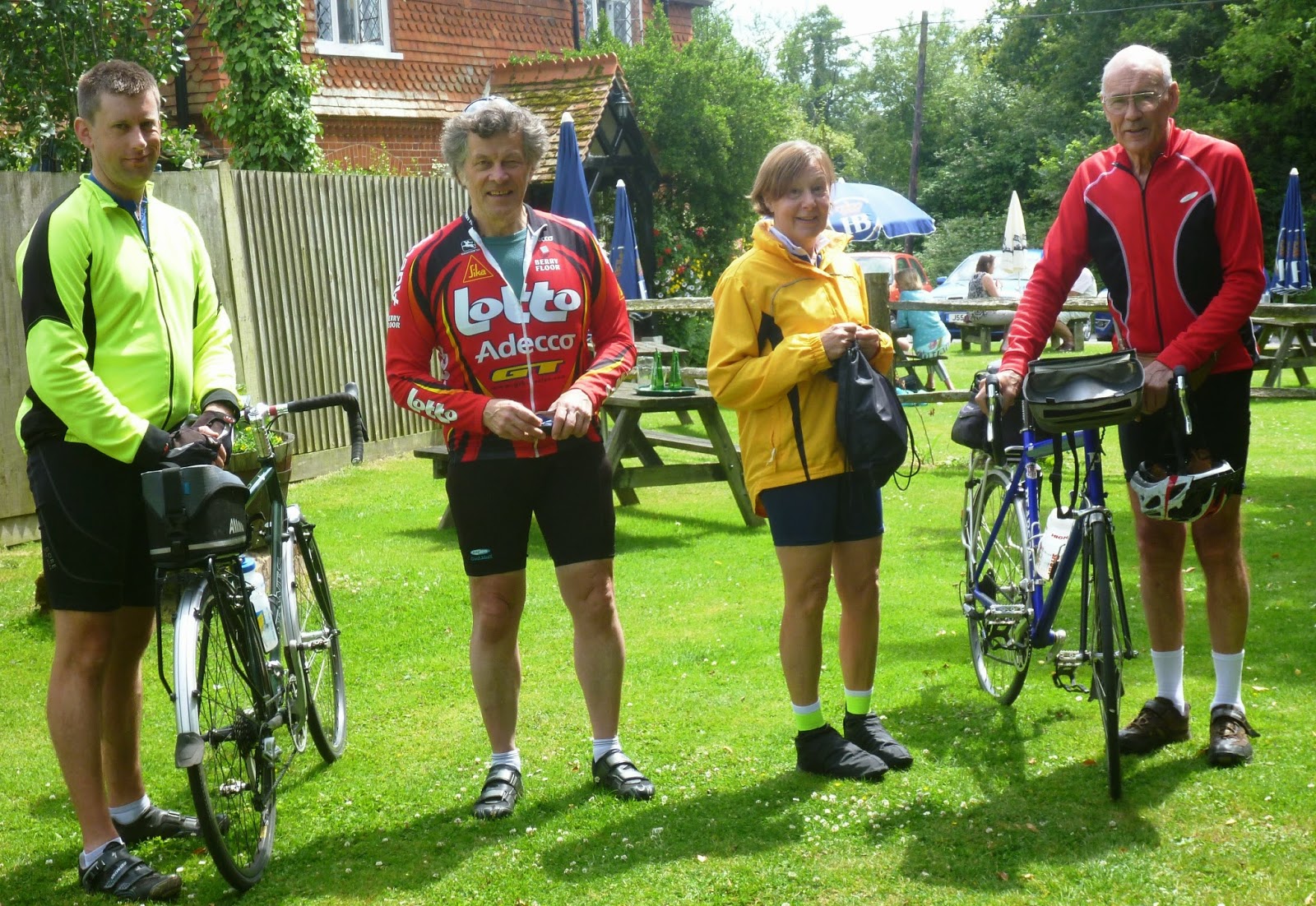 Splendid choice of route by Graham from Henfold, to approach The Haven from the south through lovely lanes undisturbed by internal combustion engines, though the Blue Ship  was also the destination for the British Two-Stroke Club.
Posted by Jeff at 13:03 No comments:

Our putative leader was in Yorkshire seeing his grandchildren/TdF so it fell to me to come up with  an alternative. Of the dozen at a very crowded Henfold, only five were out for the day. Naturally I had much to say on the topic "shoulder dislocations I have known".

We detoured through Rusper and then down Old Holbrook into Horsham. Once past a still dormant Rising Universe a right turn at Tower Hill placed us on lanes heading towards Barns Green. Here a large housing estate is starting to appear and evidently fracking may become an issue. Continuing past the (unseen) Frank Patterson home, we turned north for a short sprint along the A29. The last three miles were car-less;  our further reward - the Blue Ship and  a one o'clock alfresco lunch.

On the short and very familiar way back (Rudgwick, Ellens Green, Okewood Hill) we were on auto-pilot  to reach Capel church and its cakes just after three.

75 miles plus on a day that got better and better - the only hint of rain disappearing well before I reached 11s.
Posted by RaasayWarden at 09:10 No comments: