Don't forget that the clocks go forward one hour at 1am this Sunday morning. If you are out for a ride, don't get left standing on Kingston Bridge and  wonder where everybody is. The Royal Museum Greenwich has some QI facts. 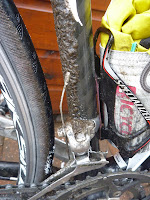 Vic and Terry sit it out in the hothouse at Ockham Bites, after Alan, Irene, Pam and Graham beat a tactical withdrawal.

On getting home, Jeff discovers his front mech iced up; explains why it was a bit sluggish. On the way out, the rims iced up.
Posted by Jeff at 19:01 1 comment:

There was snow on 'them thar hills' (Box and Ranmore) and in the air when I left home this morning. By the time I reached Ockham Bites and joined Irene, Pam, Alan and Graham sheltering indoors it was fine but cold. Soon Vic and Jeff arrived and after refreshments, chat and destination discussion it was decided to return home. Meanwhile the Bites had become a meeting place for large dog owners (ie owners of large dogs), most numerous being Alsatians, Labradors and Husky/Husky variants. Snow was still falling gently south of Leatherhead on return.

I checked out part of my proposed route last Thursday and found one road being resurfaced (not before time, there was also a water main to be repaired but we could have squozen by) but the wallows on the  Drove Road leading to Newlands Corner were almost impassable due to mud, certainly not rideable. I stopped to clear mud from mudguards etc and one three year old walking by with her Mum wondered if my chain had broken.

My last lead on January 20 was also 'snowed off'' - I am next scheduled to lead in June - perhaps the weather will be a little more seasonal ?

No problem, Andy, and you have our sympathy. How on earth do you make yourself sleep if it doesn't just happen?  Any contact between pillow and head knocks me senseless. Same with a cushion on the sofa and the television; a real Micky Finn. I wish I could give you some of my sleep! It was very thoughtful of you to let us know. Given today's weather, you may well have been guided to the right decision.

A fabulous five gathered outside the shuttered M&S in Banstead High Street: Helene, Steph, Geoffrey, Jeff and Paul. A hastily formed coalition rapidly failed to come to a decision about how we might best navigate our way to Westerham. Steph forced the issue by getting into the saddle and cycling off. We duly followed her lead to Coulsdon, Farthing Down, Chaldon and Caterham on the Hill, at which point Jeff took control of the compass. Having passed St Trinian's at Woldingham, his choice of Haliloo Valley Road was not greeted with universal joy (hullabaloo rather), by those with greyhound rather than granny gears, for whom a chevron does not arouse the same degree of excitement. He therefore had to maintain a safe distance along Croydon Road to Botley Hill. At this point, gravity took control and the ladies showed their mettle by sweeping ahead in a cloud of spray and showing their tails all the way into Westerham, before stopping outside the Tudor Café, beneath the glowering stare of Churchill's statue on Westerham Green.

Here we found a welcoming party of Ian and Richard, with whom we shared a cocktail of peppermint tea, hot chocolate, tea and black coffee to wash down toasted tea cakes and bacon sandwiches. After chat and banter, a combination of cold, damp and common sense fostered a consensus that home might be a more sensible destination than the Old House at Home in Dormansland. So it was, and each then chose his favoured route to home and hearth. Rain came and went without relent all the way to the steaming hot shower and comforting noggin in front of the sputtering fire. A truncated ride gave a truncated mileage of 43 miles. I didn't even have the opportunity to unsheath the camera, but our decision to retrench was right.

I have some explaining to do.
Last night I didn't sleep a wink.....literally.Not an hour,minute or second.
For that reason,I was unable to lead the ride today and pretty much explains my lengthy absence on and off since 2008.
It has taken control of my life and I together with the medical profession are struggling with solutions.
I apologize to the riders who were out to support me today.

Thanks to Terry, we now know the dates: 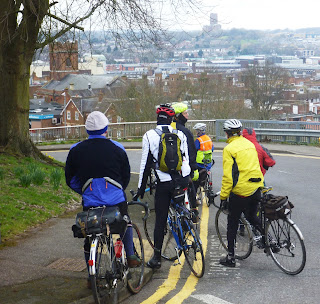 The heights of Guildford 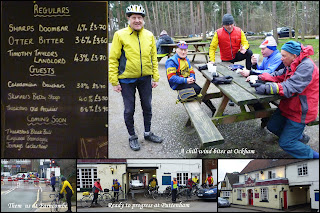 The Pilgrims' Progress
Posted by Jeff at 23:53 No comments:

To keep them guessing it was Sandown, Brooklands, then West Byfleet, Send and the long drag up to West Clandon's garden centre.

Not many miles separated us from lunch so eight were shown the undulating hills of Guildford with views of cathedral and castle. Close to Shalford I was lambasted for sticking to the road rather than a footpath (which incidentally ends with a flight of steps) - you can't win them all! After Charterhouse, the A3 marked the start of countryside but all too soon we were in Puttenham. As we arrived, Mike Fricker paused to say hello. Fortunately the mums of Puttenham dine late at the Good Intent and we squeezed in somehow.


The temperature had dropped and occasional somethings fluttered on the rising breeze. A direct route home was the answer but the NDW to Watts proved sticky, and the Hogback's track into Guildford watery. Now only the A3 cyclepath separated a remaining five from hot drinks at Ockham Bites - we were the only customers. A day for many layers and two pairs of gloves; even this proved inadequate and I was pleased to be home after 60 miles.
Posted by Anonymous at 07:55 No comments: 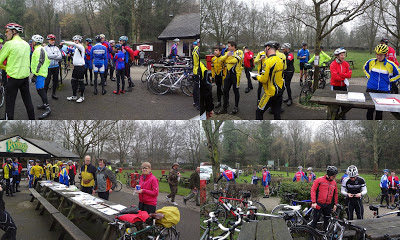 Well done Ed & Graham for yet another great event. Graham advises that there were 104 signed on at start plus 4 latecomers. Despite the forecast the weather was not too bad and thanks very much to Ray Dare (& others?) for checking the course on Friday when the weather was not so kind. I am reliably informed that Ray was so soaked that he had to get in the bath and get warmed up before extricating himself from his clothes. Thanks also to Irene, Jake & Terry for helping out at the signing on. There were ques of riders at 9.30 and we were almost over-run but thanks to all riders for being so patient! I have to say Graham despite your apprehension that the numbers might be down you obviously did a fantastic job in getting the message out! Definitely an event to try and continue with so I hope you can stand the pace for another year. Thanks must also go to Ed for marshaling at Leith Hill, it was a cold and long job. Good also to see Mick Ayeliff at the top of white down and thanks for the shove just what the Dr. ordered! Great to see so many racing clubs take part particularly De Laun who if we had a puncture reward would certainly have won. I think I saw Geraldine more that 4 times as Merik and she passed me only to be overtaken again and again. Good also to see Amanda (KPRC) on new CUBE bike 1st time out & Stewart but alas they were not on the hilly 50. Pity there were not more KPRC riders supporting this CTCSWL event as they are the racing offshoot!

This was grey and overcast but far better than yesterday's torrents. It never ceases to amaze me that people look forward to our event each year. So perhaps I should not have been surprised when over 100 turned up (plus four latecomers who appeared as we were packing up). With Ed, Irene, Jake, Mike and Terry on hand, all were quickly signed in and sent on their way. Thankfully the road works encountered on Tuesday were gone so 1:47 was the time of the first one back. I'll have to believe him as we were still at the bottom of Box Hill!

Thanks also to Ray for his re-survey of the route on Friday.
Posted by Anonymous at 16:17 No comments: 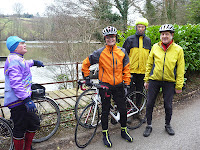 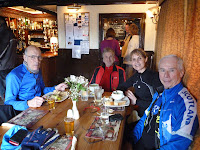 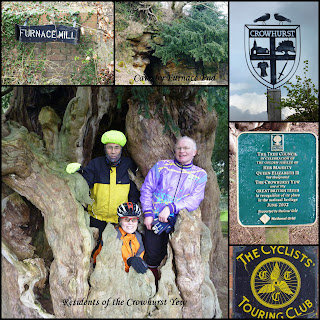 I can't say I'm keen on the A217 as a road for cyclists but today I decided on a direct route to Hookwood and this road serves that purpose.
I left the tea hut (Epsom Downs) at pretty much dead on 9.15am but this was a BIG mistake.
In a matter of seconds I was surrounded by folk coming in all directions who had read the runs list "Meet at 9.15" as precisely that......not leave at  9.15am.
Apologies to those concerned including Janice & Daniel who arrived moments after we had left.

This Tesco now serves Costa coffee.........unfortunately at Costa prices.
Leaving Bob and an unshaven Ray,Graham & Daniel we made for Smallfield and Lingfield to lunch at Cowden's "Fountain".
After half a cider made by Badger I think,it was a short hop to tea at Godstone having a quick look at the"Crowhurst Yew" on the way.
The following is a piece written by Clive Aslet of The Telegraph:

I understand why our pagan ancestors worshipped trees. Last week, I made a pilgrimage to the Crowhurst Yew, in the churchyard of that Surrey village. I had visited it before, but this time, having formed the idea that the BBC needs a documentary about trees, I was with a film crew, and the constant need to pause and retake because of passing planes and traffic allowed me to deepen my acquaintance.
Yews grow wild in Surrey and this one certainly predates the 12th-century church, perhaps by several thousand years. It is difficult to date ancient trees because the trunks, as with this one, are generally hollow; carbon dating cannot be applied because the tissue is still living. But the accepted wisdom is that this tree is about 4,000 years old.
Like other very old beings, the yew is in need of a little support, and rests its limbs on wooden supports. But it still puts forth a great bush of green. The experience of walking inside it, though, is astonishing. With all the soft wood worn away, the walls look as though they are part of a grotto, formed by lava that has solidified.
Even in Charles I’s reign, the girth measured 10 yards; 400 years later, it is a few feet bigger still. At some point, somebody put a door in it; that was presumably before another fissure opened up in the trunk, allowing you to step through without using the door. I suspect the local publican; he was charged with looking after the tree. Perhaps he also installed the table and chairs that it was supposed to have contained at one point. In 1820, a cannonball was found in the trunk: the tree had absorbed it presumably during the Civil War, and carried on.
I am told that yews can sprout again, long after they have been turned into beams and built into houses. Not surprisingly, they became symbols of regeneration, as well, in the Christian context, as resurrection. They are an appropriate accompaniment to churches. I would only note that, if you happen to be sitting on an iron bench on a bright but biting day, it can be awfully cold underneath one.


A mostly cloudy day with occasional glimpses of sun.
Mileage around 50,I parted company with my computer sometime after tea :-(
Posted by Tartan Socks(long) at 21:16 No comments: