Apologies, I didn't check and assumed when planning this ride that the Ride London event would be held on the last weekend in July.  In fact, Ride London will be on 4 August so coinciding with this ride.  That makes the Raynes Park meeting point impractical for several reasons, so I am changing the meeting point to Banstead (roundabout at junction of Sutton Lane/Winkworth Road/Croydon Lane) at 09.30.

I can also pick up at other points between Walton-on-Thames and Banstead if required, by prior arrangement.

All other details of the ride are unchanged as published.

David and Bob were seated in the café before I arrived at 10.15.  Brian Bent arrived as I was locking up my bike, then Vic, Ed, Maureen, Lilian, Ann and Grant joined us.   By the time coffees and buns were consumed it was nigh on 11.30 before we were on our way. David very kindly took up the back markers position.

Our route to Woking was over the motor way bridge to Shepperton. Left and right into Manygate Lane then Walton Bridge to Weybridge, via the path through the woods!   Ann left us here whilst the rest of us continued to Weybridge station car park to connect with the path leading us to Brooklands Estate passing Mercedes-Benz World test track on the left and the historic Brooklands racing track on our right. Moving on we came to the roundabout where The Concorde is on display!!  A perfect spot for a group photo which was taken by a very kind passer by - who halted his running to offer to take it :) 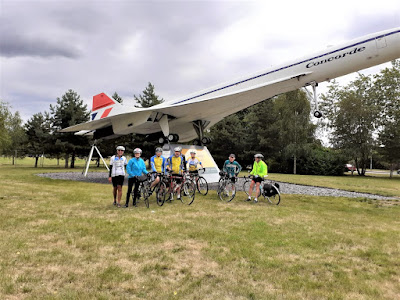 Through Byfleet to Murray Lane, with a short ride along the river Wey to cross over into Dodds Lane.   Grant had left us at Lock Lane before we took a right at the end of Warren Lane for Woking. No deviations as time was moving on and I had agreed to meet Graham at Wetherspoons. - and as we arrived at 13.10 - so did Graham.  Brian left us here to eat his own lunch else where
we lingered a while, no rush.... leaving near to 14.30.

David made his speedy way home; Maureen and Lilian headed for the train station leaving Vic, Ed and myself to decide on our route home. The Basingstoke Canal being the chosen route.  Tea was to be at the Golden café but they had shut a few minutes before our arrival so The Olive Tree Caffe was a good substitute.   After some time spent discussing various aspects of cycling, including the Tour de France, we bade farewell, heading off in various directions.

Arriving at Staines bridge half an hour early I decided to have a coffee in Wetherspoons, Ray also joined me. Having forgotten my lock Ray kindly used his for both bikes, only to discover later that he had left it on the wall at the pub.

Returing to th bridge I was pleasently supprised to see Pam, Simon, Graham, Vic, Dave and a new chap, Clive on an electric bike. As we only had an hour to get to 11's at Burnham Beeches I had planned the most direct route, Wraysbury, Datchet, Slough and the Northern cycle route through Godolphin Recreation Ground and thr cycle path upto Farnham Royal and then Crown Lane right upto Burnham Beeches.

Arriving at the cafe to find 3 South Bucks cyclists, John Capell, Brian Ellis and David Winterburn, supping tea, we did arrive 15 minutes late at 10.45. A few of our group were keen for bacon butties so we were delayed and our departure a tad late. Dave had a need to retun home so headed South.

This year it was South Bucks turn to lead and  John got the group moving, on through the Beeches on a metalled road to emerge into Hawthorn lane. and down through Burnham village, Taplow and through a new estate and a new footbridge arcoss the Thames to emerge at Boulters lock. Then down to the Bear at Maidenhead for lunch.

We sat outside in the Sun and Bob joined us there. The usual quick service, I used the phone app and was the first to tuck into lunch. There was plenty of chit chat with the South Buck group but we eventualy made the move towards our bikes with one of the South Bucks group heading directly for home, John asked me to lead to Dorney for tea so I set off along the Strand waterway to Desbourgh Bowing club and then onto track through Braywick nature reserve to Bray and the wooden bridge to Dorney at which point another South Bucks member headed for home, so only John Capell left to join us for tea at Dorney.

We really did linger over tea sitting in the Sun, with lots of chatter but eventully we set off with John turning left to head North and the rest of us turning right to Eton and then Datchet where those left parted company, with Graham, Ray and myself heading for Poyle where Rsy and Graham headed for Stanwell Moor and me for Harmondsworth and home.

An enjoyable day on the bike.

A Change of Plans.

I arrived at the Golden cafe to find Bob, Graham and Dave already seated and awaiting food. Soon the deluge of riders began to arrive. Ed arrived with me and soon Pam and Gemma appeared, then Ray Wren, Stephanie, Ann, Terry and Vic. The biggest turnout for some time.

I had debated Saturday night over the route to Dinton pastures and decided to change to Jealotts hill which was 3 miles shorter, meaning just 18 to lunch. Bob was not going to join us for lunch and neither was Ray who was going to do the rounds of bike shops looking for tubeless valves for his new wheels.

The route took us to Virginia Water and a brief spell on the A30 before turning into Blacknest road and onto Cheapside, where Steph left us, then through Ascot racecourse and through the edge of New Mile golf club and onto Chavey Down and the outskirts of Bracknell which has some lovely cycle paths that I took advantage of. Before touching the edge of Warfield and back roads to the New Leathern Bottle at Jealotts Hill. I hadn't booked but the pub had no trouble in feeding 9 hungry cyclists. After lunch Terry had decided to cycle onto Wokingham and catch the train back and Dave headed off for his own route home. 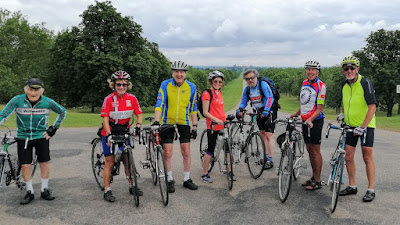 Tea was planned for Windsor far shop via Cranbourne, Woodside and Windsor Great park and the welcome decent of Crimp Hill. We lost a few more before tea and only Pam, Gemma, Ed, Ann and myself stopped for a cuppa after which we headed for Runnymede with Pam guiding us over the meads and into Egham where Ed headed for the station, Gemma for Staines and I took Ann as far as Chertsey where she turned for Adlestone.

Lovely to see such a good turnout, the weather was good for cycling. Thank you all for swelling the ranks and for your company and to Dave for his back marking. A very pleasant 70+ miles for me.

Dampness was continuous from around five so just the two of us at Bourne Valley was no surprise. But Dave was only out for the morning so I headed home with wet feet but in the dry (naturally). The sun appeared around one thirty.
Posted by RaasayWarden at 13:40 No comments: 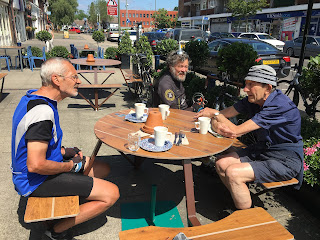 This being the weekend of the Dieppe Raid I wasn't expecting a large turn-out so was pleased to be joined by Keith and Graham at the start at Raynes Park.   We made good progress to Petts Wood, arriving just before 10.30 and  having been only slightly slowed by a road closure for the cycling leg of a children's triathlon event!

Bob was already ensconced at elevenses but didn't join us for the rest of the ride.   After setting off from Petts Wood we were quite quickly into leafy, but rather hilly, Kentish lanes, making first for Chelsfield, and then dropping down into Shoreham.   From there it was a long but scenic grind up to Twitton and Otford.  Approaching Dunton Green we took a shady, lakeside path to avoid at least some of the main road into Sevenoaks town centre, but there was no way of  avoiding that final long, hot, busy, steepish climb up to Wetherspoons (The Sennochian)!

Cycle parking was poor near the pub so we were kindly allowed by the staff to carry our bikes through to the garden.   It had been a fairly hilly ride for the relatively short distance and, after lunch,  none of us had the appetite to ride back home, so Keith made a beeline for Zone 6, and Graham and I redeemed some of our potential energy gain by heading the mile or so down to Sevenoaks station and hardly turning a pedal in the process!   Thanks to all for your company.
Posted by David W at 08:03 No comments: