Pam very kindly has forwarded the following dates for your diary: 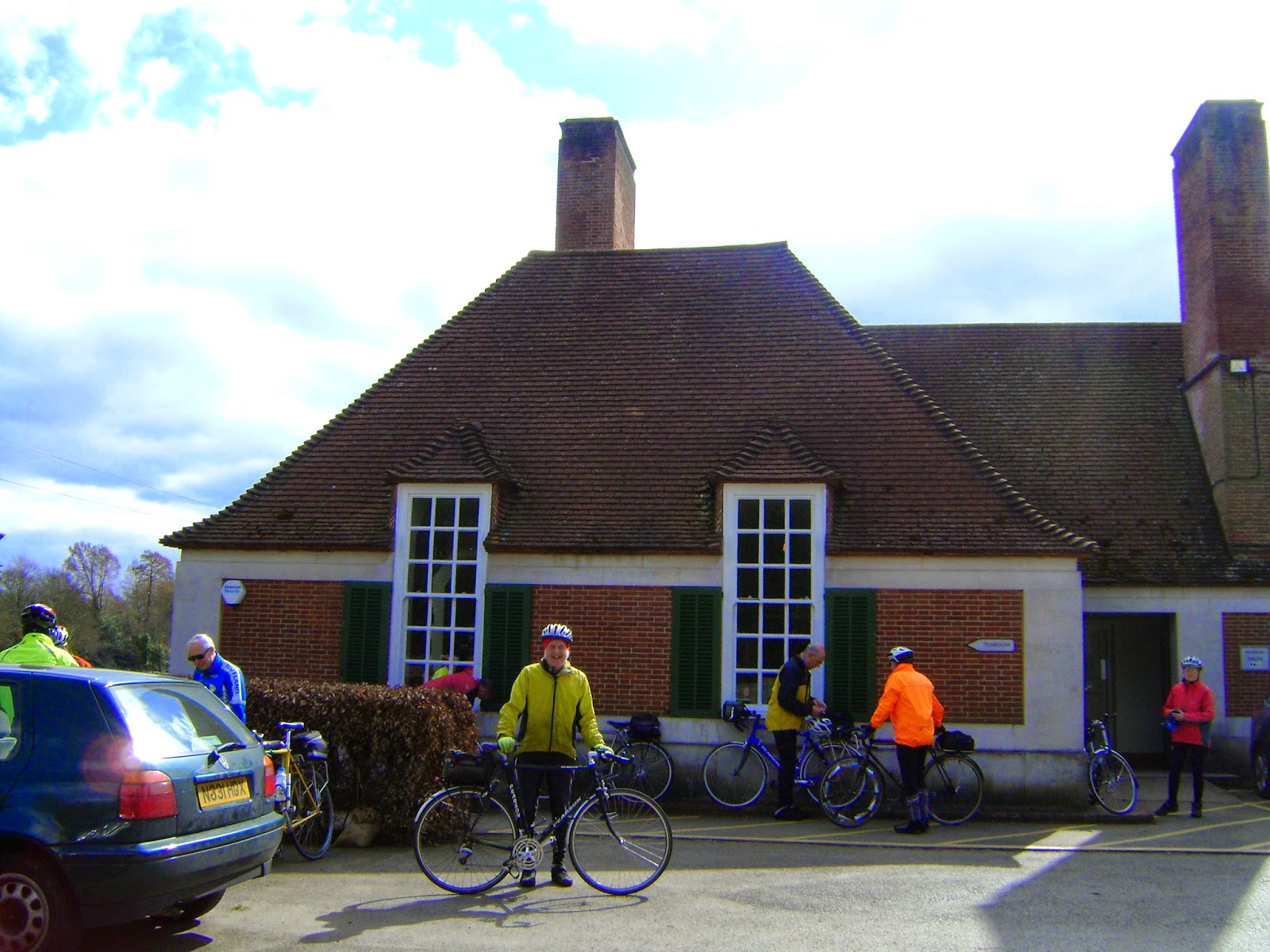 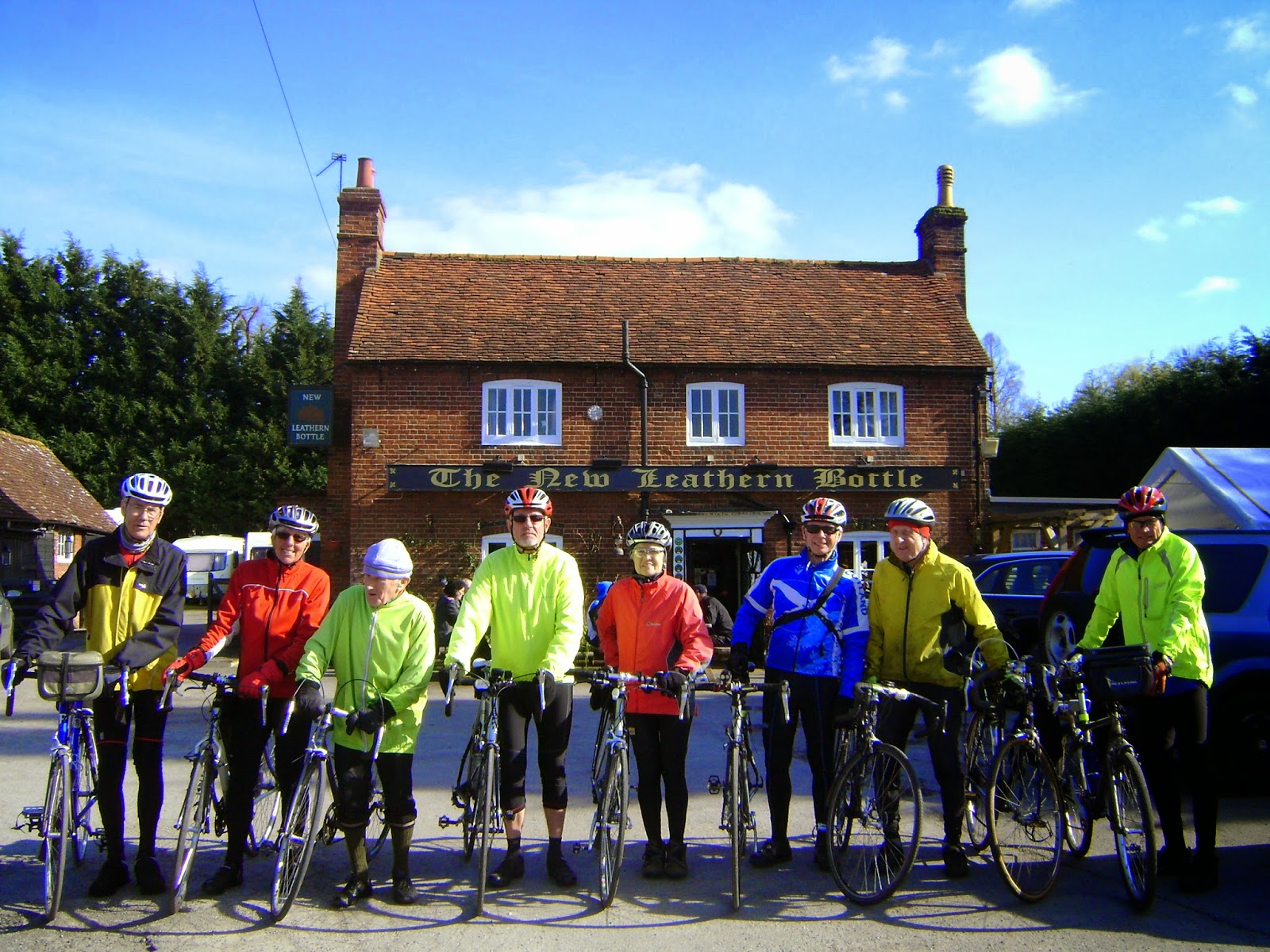 14 arrived at the Magna Carta tearooms for 11’s  on a magnificent sunny crisp morning.  3 returned home which left 11 to continue the ride to lunch via Priest Hill, Bishopsgate Windsor Park exiting at Cranbourne Gate to Drift Road taking 1st left towards Maidens Green, Nuptown to Moss End then Tickleback Lane to The New Leatherned Bottle  as I understand it they are new tenants of 6 months.   Sadly we waited over 1 hour for our food they were unexpectedly busy but it was worth it as the food was beautifully served, very nice and very reasonably priced.
We then returned via Ascot racecource  to Windsor Park and on to Staines where 9 stayed to partake of cakes & tea, we then discovered that it was Vic’s 83rd birthday so Pam & I hoped he had enjoyed his birthday party.   Thank you one and all for a very enjoyable day

Posted by Tartan Socks(long) at 19:18 No comments:

After a recce by the advanced party, all can be revealed:

You will have trouble finding Bax Castle on the OS map 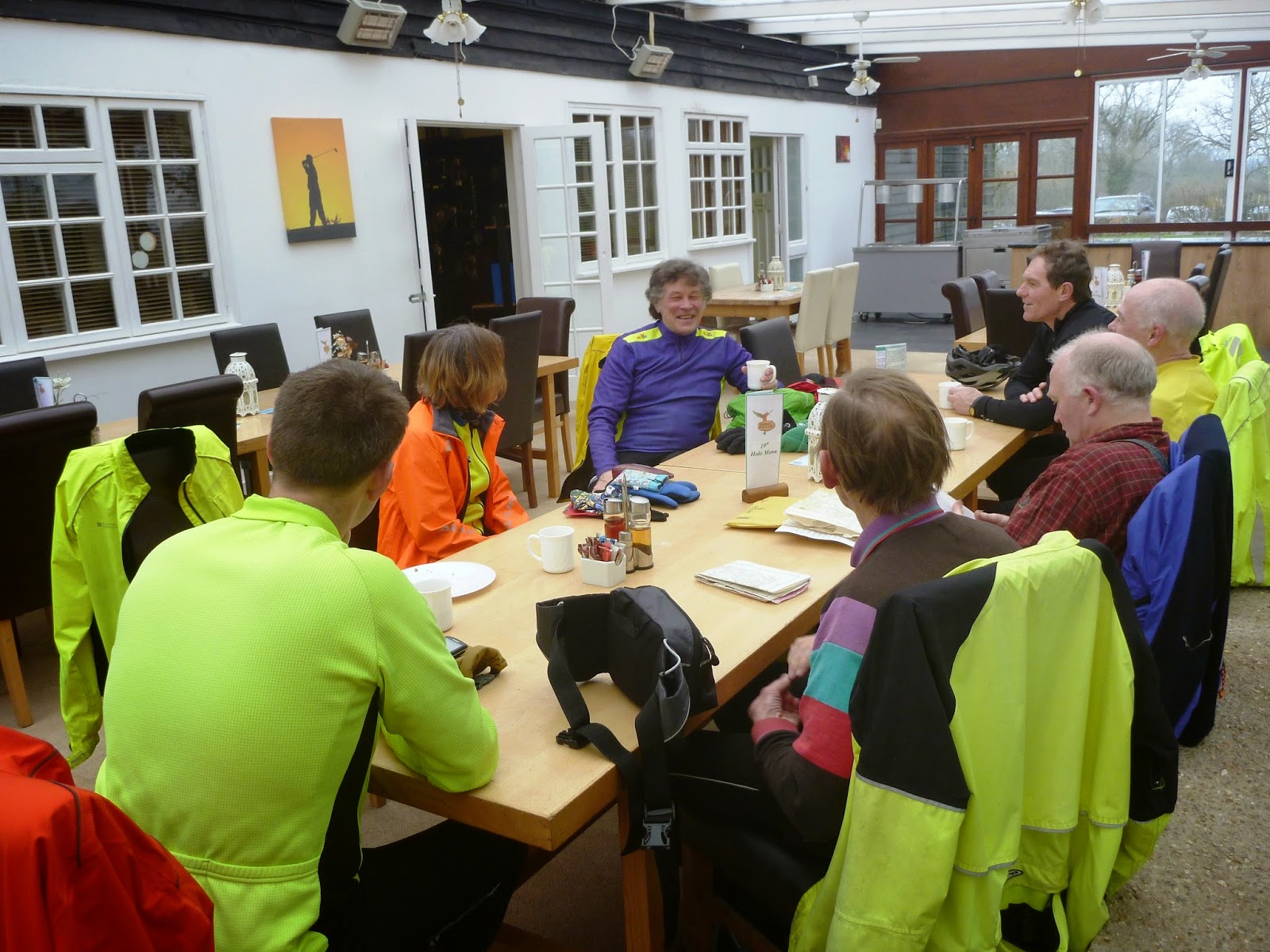 It was a pity those wall heaters were not working. It was nearly as cold
inside the conservatory as outside 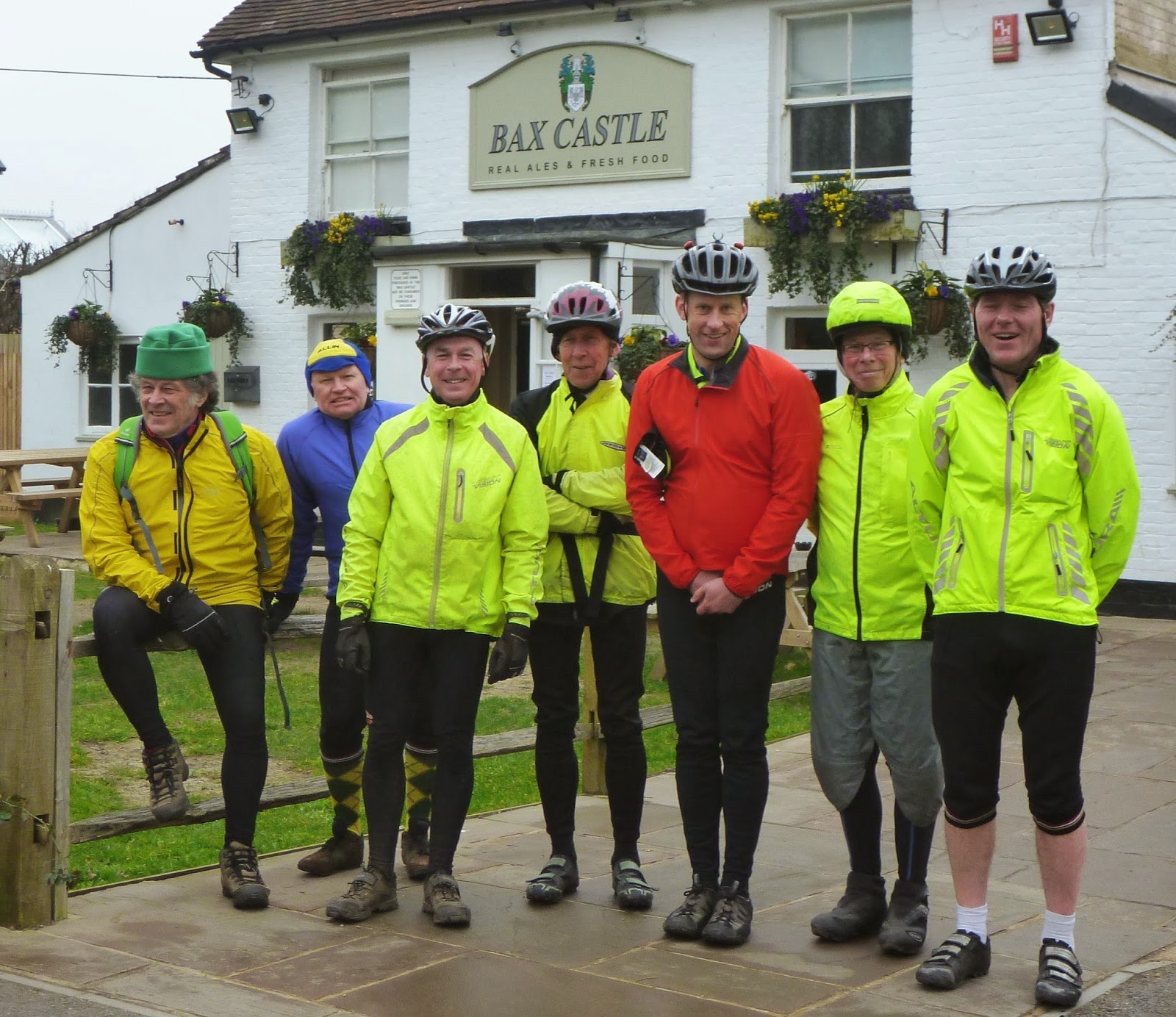 We lost the lady, but seven set out and seven came home
Posted by Jeff at 10:49 No comments: 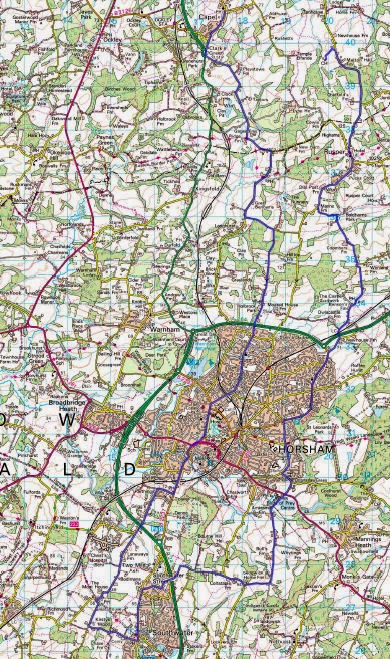 Hopefully this was the last throes of winter - cold and damp thanks to the gusty easterlies. So a quiet Rusper GC welcomed  just eight of us.

With Angela heading off to dig her potatoes, we climbed to Rusper where it's now the Plough And Attic Rooms(!). Right by The Star and a first left saw us heading down the rarely used Wimland Road. After passing the now closed and semi-dark Frog And Nightgown, walkers drew our attention drawn to a distressed bird of prey(buzzard?, sparrowhawk?) flapping on only one wing but nothing we could do.

We crossed the A264 into Old Crawley Road and suburbia. Doomsday Green saw us back amongst the green stuff and heading towards Sedgwick. Here we experienced what I presume is road rage - unpleasant; obnoxious individual. On exiting Southwater, our forces were divided with a bare majority Downs Linking to the Bax Castle. The 45-minute wait was to be expected but discussed. Stop it was; eventually even the hardiest was forced to seek shelter from the cold.

By Christ's Hospital and under the A24 saw us back in the centre of Horsham. As usual a complete lack of traffic made not the climb of Old Holbrook any easier. All that remained was the downhill swoop into Capel at three for the first cakes of the year. Around 70 miles door to door - rather too many for my aching back.

Posted by RaasayWarden at 10:49 No comments:

Seen on a wall in Merstham 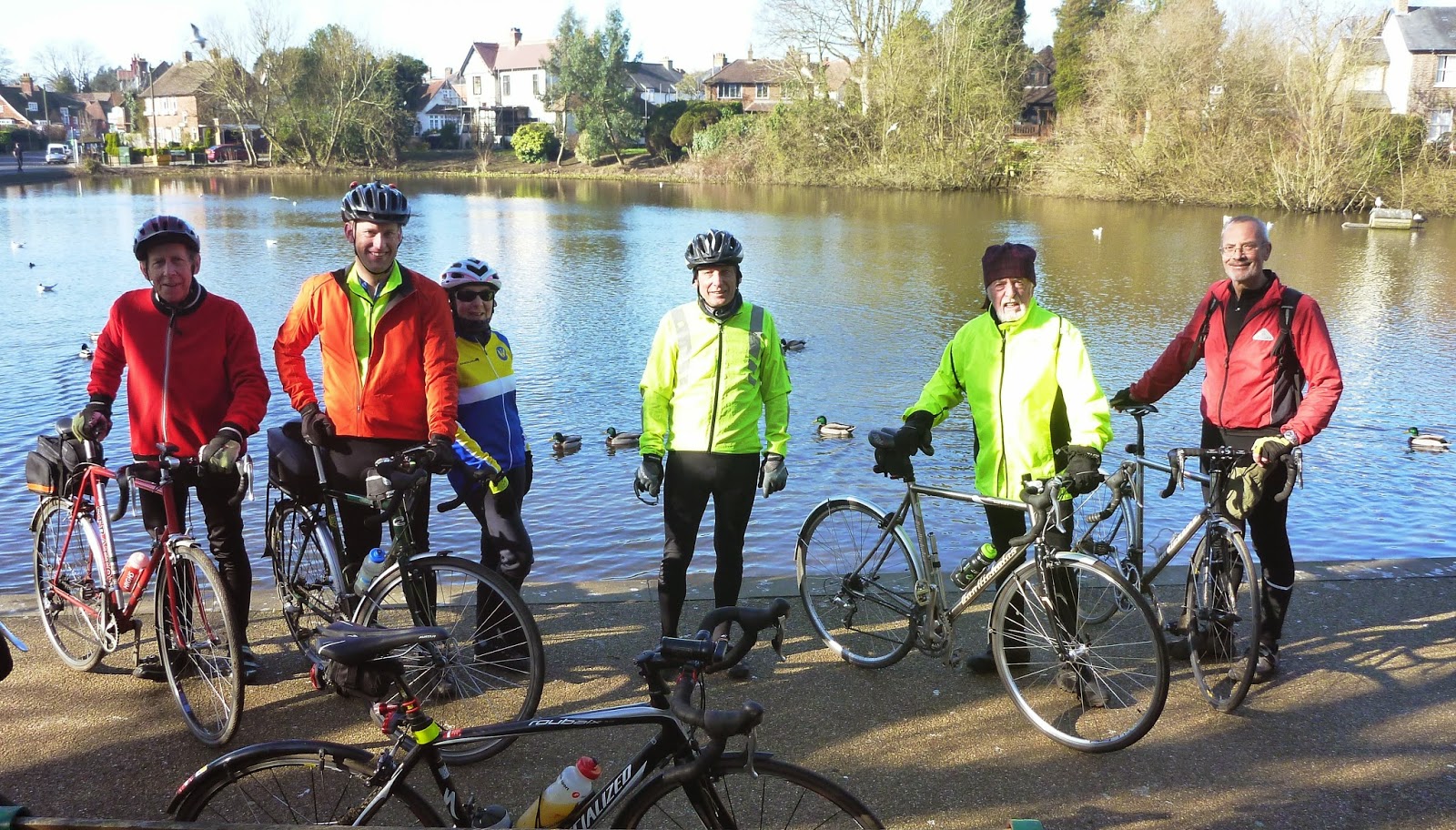 Seven gathered in bright sunlight to watch the gulls and ducks on a chilly Walton pond. After a decent wait for late arrivals, the last having a ride of several hundred yards, we set off southwards down a pock-marked Chequers Lane, to savour once again the joy of swooping down a now reopened Pebble Hill. A sprightly jaunt through familiar flatlands took us through Brockham, Leigh, and the slight incline of Norwood Hill to the A217 and the Temple of Tesco at Hookwood. We locked up our bikes under the observant gaze of two jovial Romanians with a blacked out people carrier. Bob and a reincarnated Andy were there to greet us and Ian soon joined us as we broke our fast. Our number then fell by two as Angie left, sharing a wheel with Mike, to tend her garden. 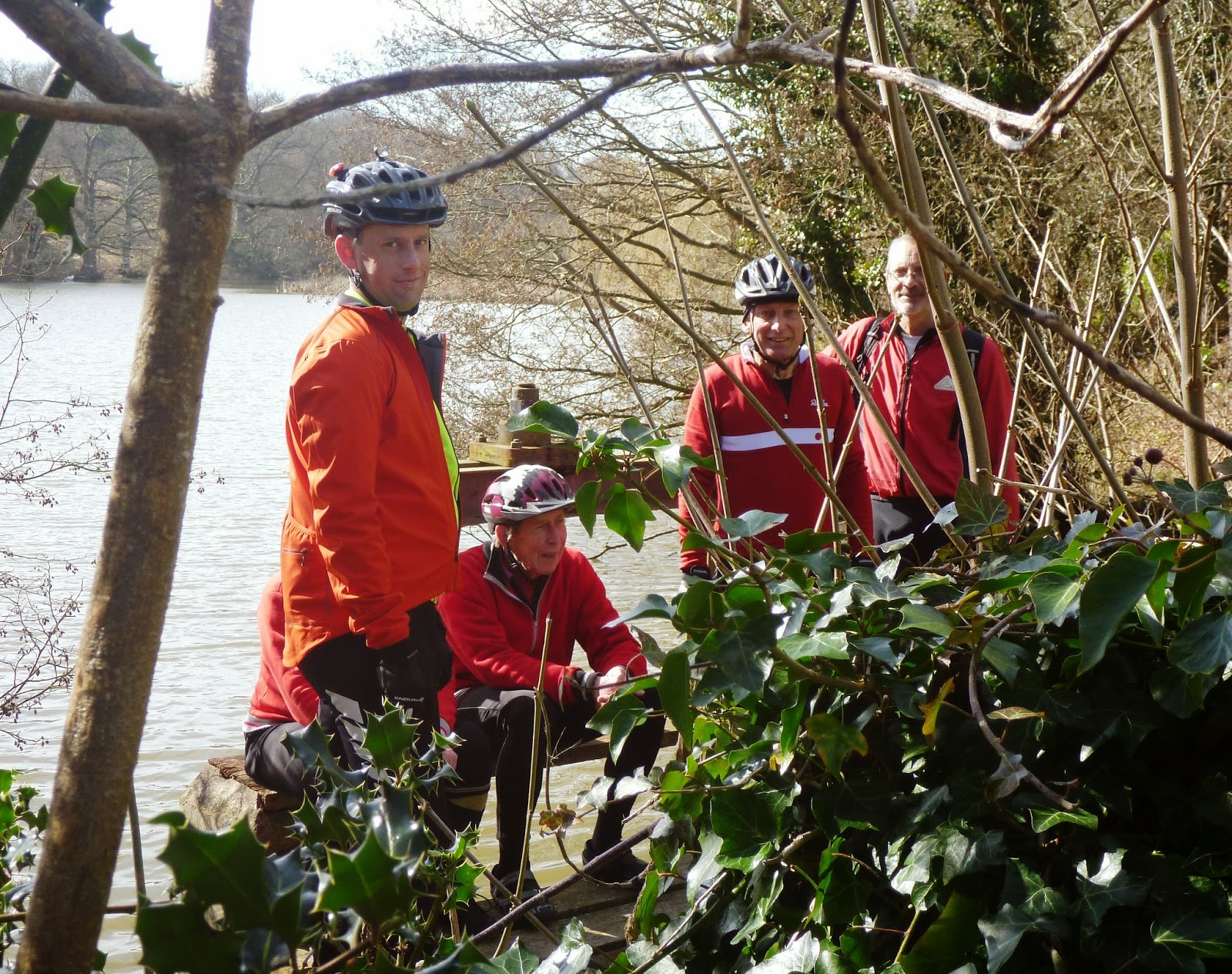 Once out of Horley, our pace quickened with a chuff easterly wind to speed us through the billiard table fields of Smallfield and Newchapel to Lingfield. The angle of inclination then tilted through Dormansland up to the delightful Smithy's Lane. We dallied at Furnace Lake, then continued past the Winged Wheel at Cowden's Fountain Inn and on up the aptly named Blowers Hill, where Cow Lane led us to the Kentish Horse.

Our reservation was wise, as the pub was soon humming and tables full. Good food and drink before a remount to discover that blue skies had turned to grey. Our tea stop was revised from Godstone Green to Fanny's. Those of little faith were shocked to find that my promise of a long downhill to Edenbridge proved true. Thereafter the ride was flattish via Staffhurst to Tilburstow, where who knows what strange substances impelled a supercharged Andy nearly into orbit. There was a price to pay. A steward's enquiry at the top of Tilburstow revealed no mechanical ill, but the climb into Bletchingley took its toll of Andy's chain, no longer able to take the strain. Paul stopped to give encouragement while the rest rode on for a conference at the top of the hill. Mobile technology failed and the consensus was to carry on, one group via high road, the other via low road, to meet again in Merstham, for a final haul up Markedge Lane to Fanny's. Concern about the light, or lack of it, had reduced our number, but a final luminous four refreshed themselves with tea and cake. Neil weighed in the balance the competing claims of tea and light; tea won. I trust that all made landfall safely and enjoyed a pleasant foray into Kent.

I spotted this on the Capel Church website. But the teas link is incorrect (error 404), so we'll just have to call in on Sunday and pick up a paper copy! 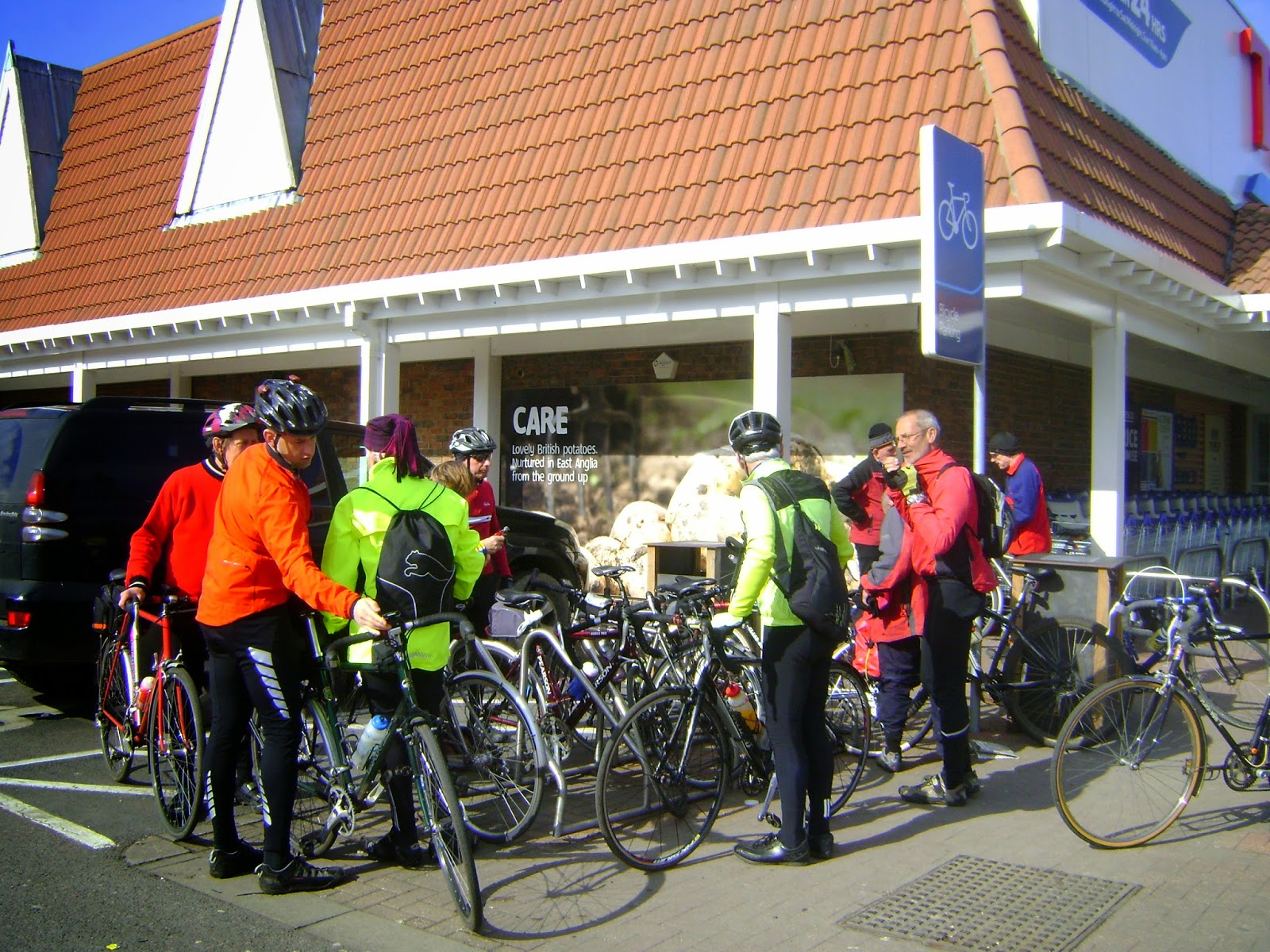 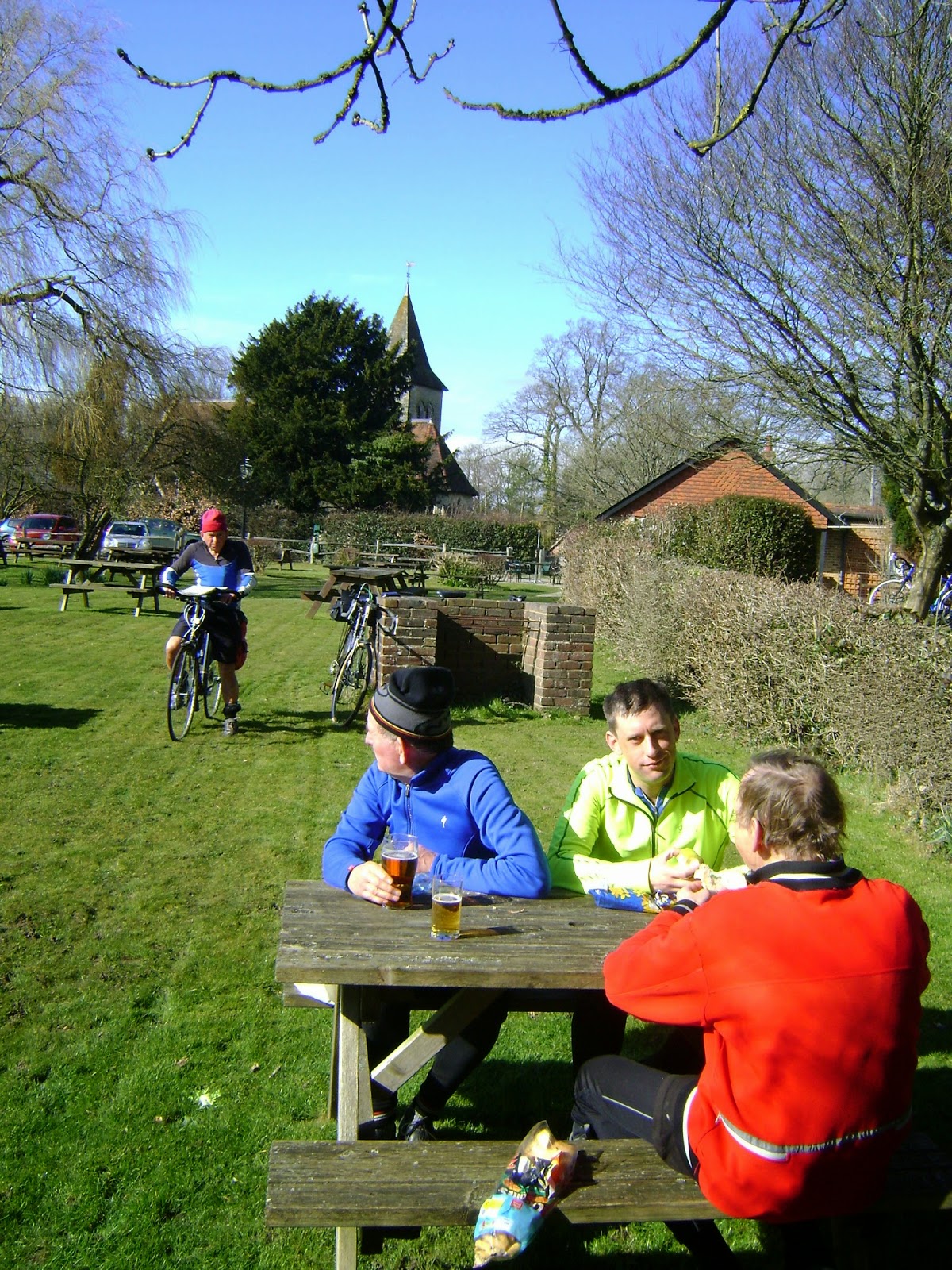 My Holdsworth suffered a chain break on Sunday.
Thankfully,I was carrying one of the first cycle specific multi-tools invented.......the CoolTool. 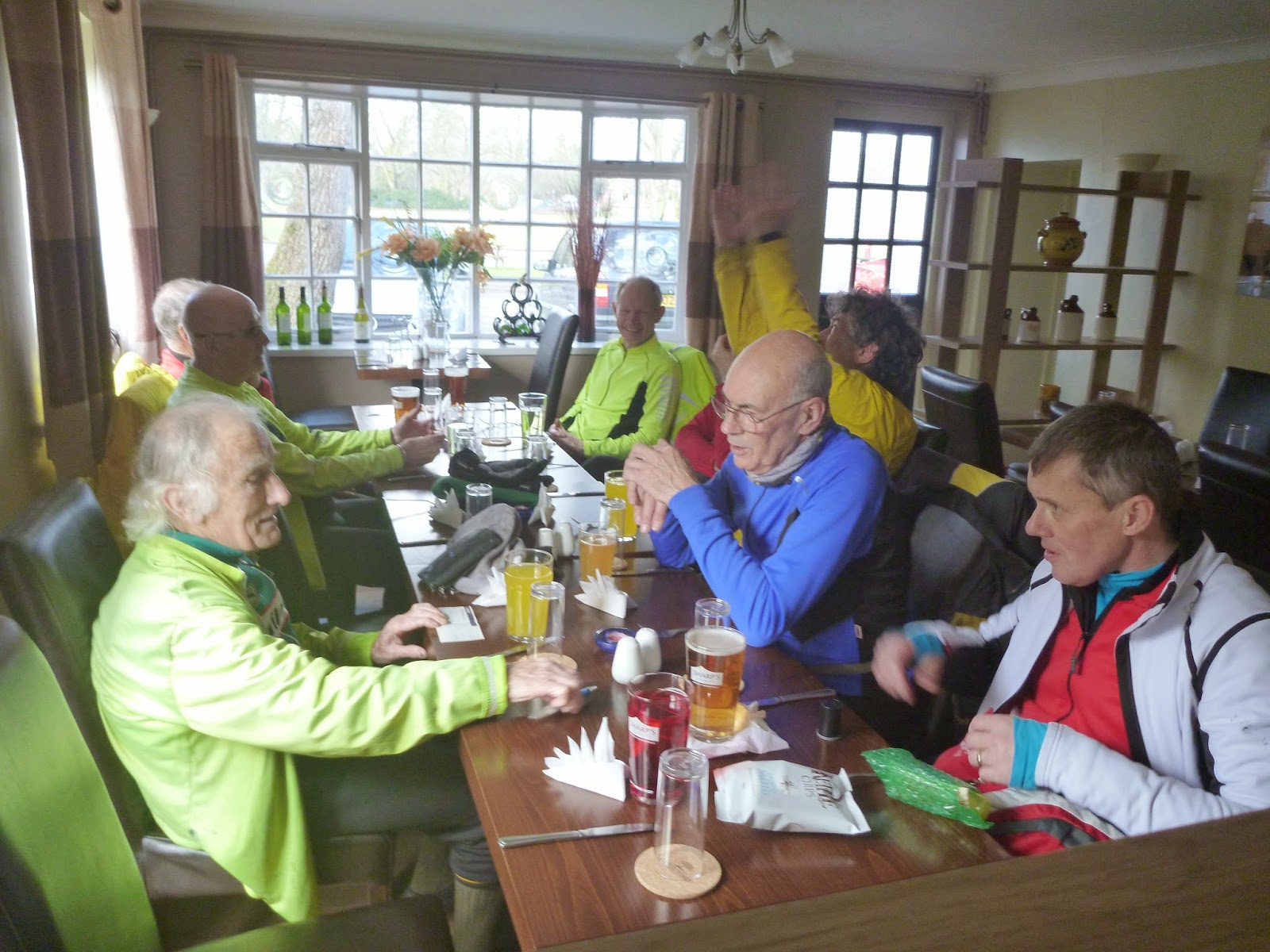 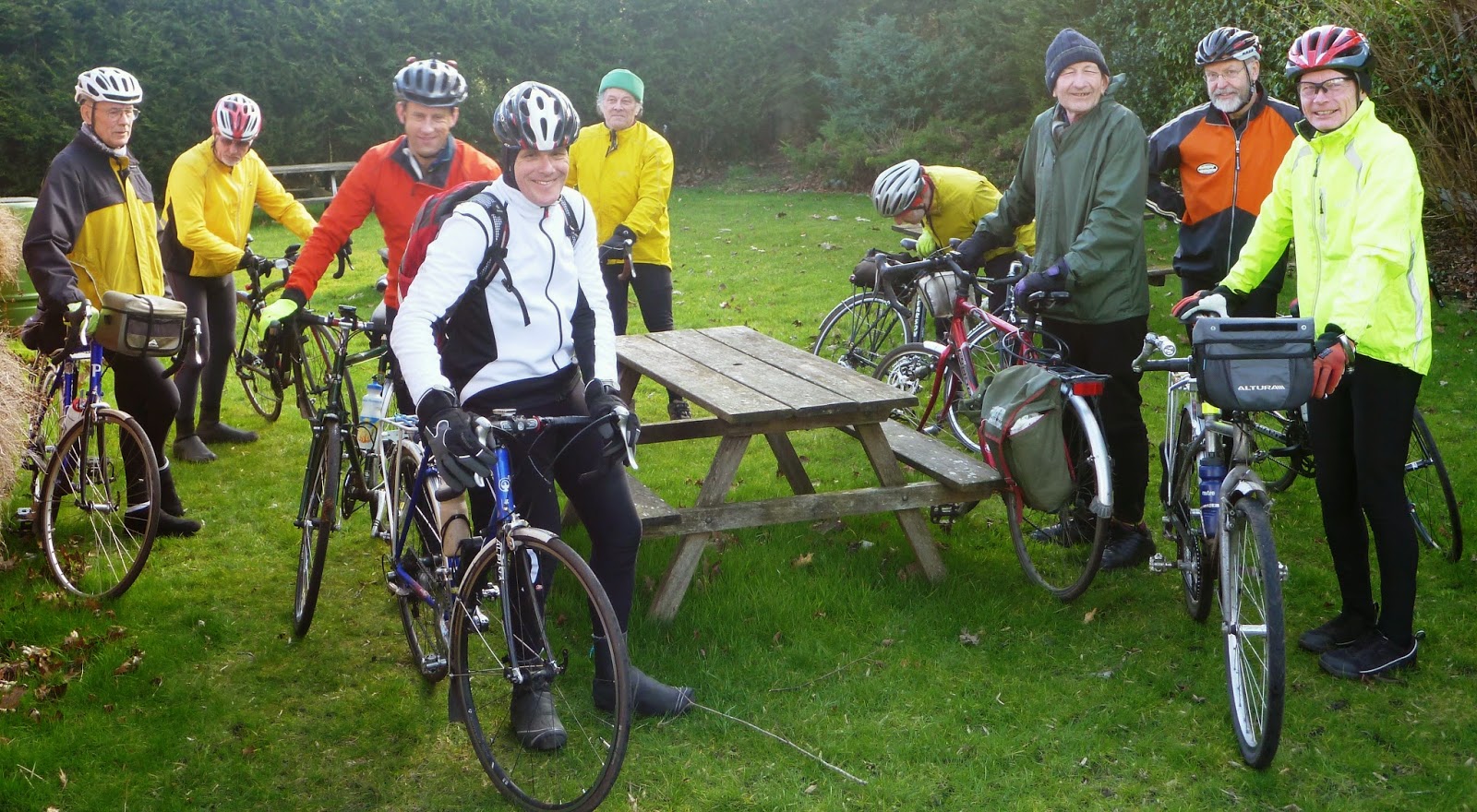 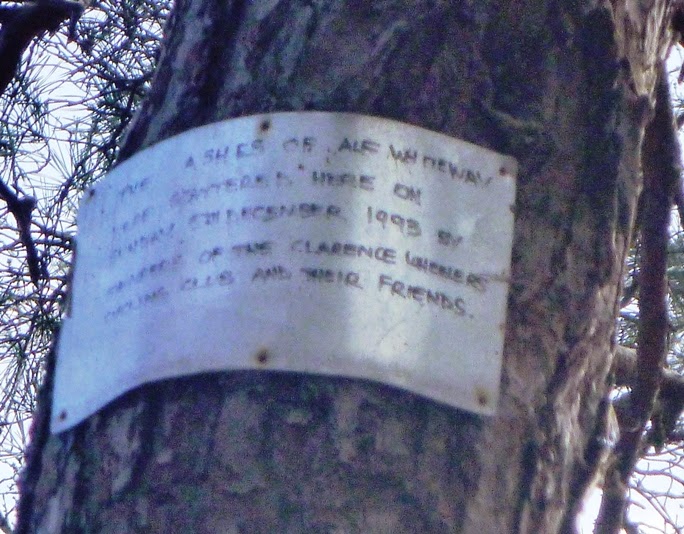 We took a respectful crust and mug of ale before our funereal visit to the final resting place of two adventurers; Henry Morton Stanley in the churchyard of St Michael and All Angels, Pirbright and Alf Whiteway, whose ashes were scattered in the woods near Chobham. "The ashes of Alf Whiteway were scattered here on Sunday 6th December 1993 by members of the Clarence Wheelers Cycling Club and their friends". Vic will explain.

More bones, but these ones still full of marrow! 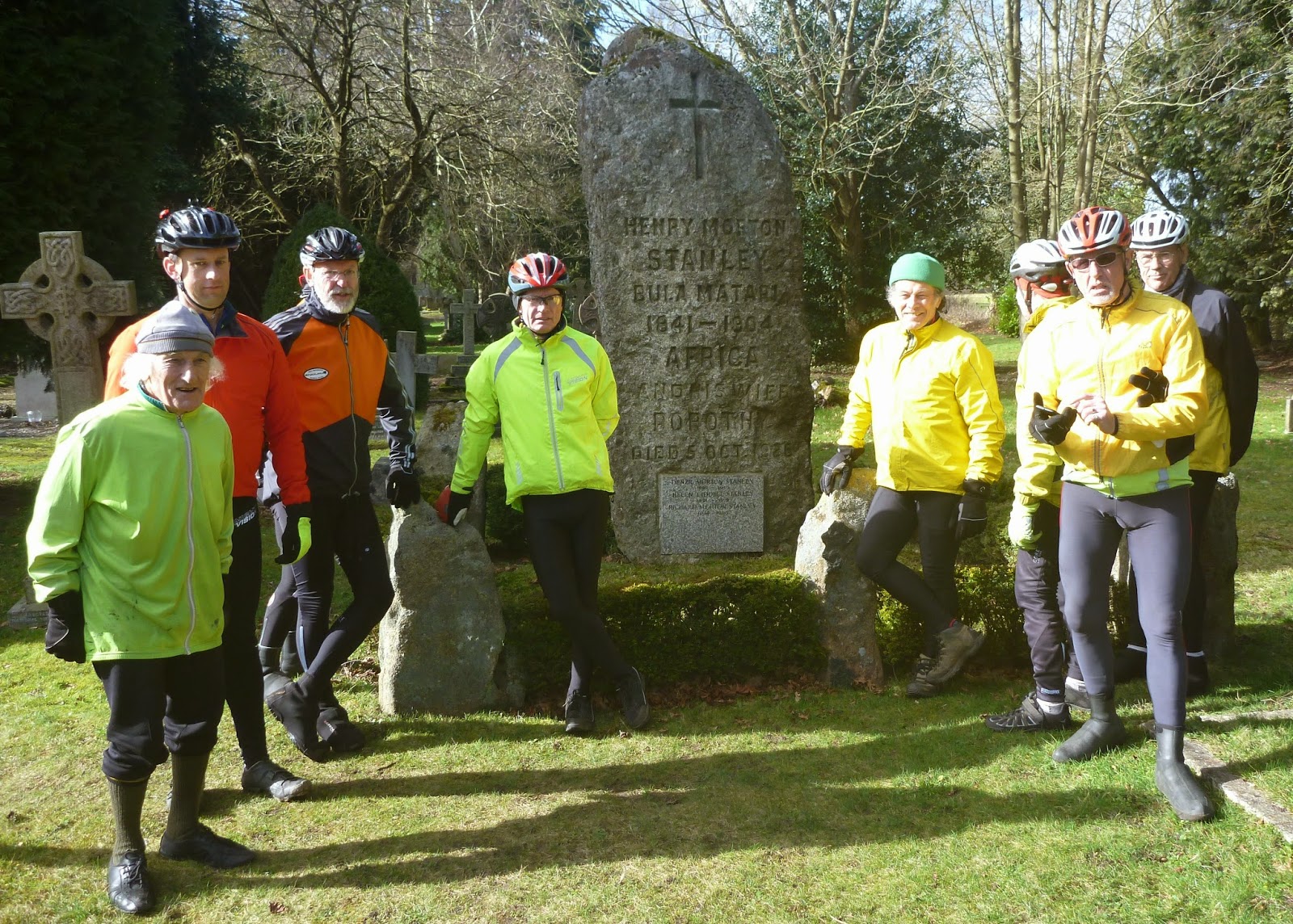 The bones of HMS

P.S. A heart-warming blast from the past: Stephanie behind wicket at the Cricketers on a chilly 5th December 2010 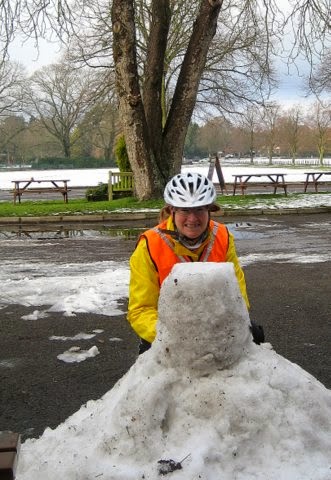 From Terry's unfathomable archives from which there is no escape.
Posted by Jeff at 19:01 No comments: