Welcome Back - Our Rides Restart on Sunday 4 April!

Our group rides can restart from Easter Sunday after what seems like an eternity!

For the time being we must keep to groups of six when riding or at refreshment breaks.

Until the ride on 18 April all refreshments will be takeaways or bring your own, and planned rides will be altered to suit.

Change of programme - our first ride on Sunday 4 April will start from Walton Bridge (not Ripley as published), lunch stop to be arranged (bring your own sandwiches and drink).

Watch this blog for details of/changes to planned rides and welcome back!

There is a newish (2019?) online facility called Assemble designed for groups. Oddly I can list all of SWL volunteers!, the sort of detail needed for an annual return but there's no (obvious) mention of AGMs.

Trawling the CUK website I found https://www.cyclinguk.org/local-groups/cycling-uk-member-group-agms-2021 which I couldn't find it using the Search option! Clearly it's directed towards prospective  members. Thus we read:

'AGMs are normally very social events and often feature a ride before or after the meeting'
'Unfortunately, due to Covid, most groups won't be able to host their AGMs in person as they normally would'
'Instead, most will be held online, using Microsoft Teams, Zoom or a similar service. Some groups have even decided to defer their AGM to a later date or make alternative arrangements, such as conducting it via email'

Hopefully the next two weeks will bring some clarity. Your views (when, where, agenda, or whatever) are sought for a decision in April. The quorum is 10, a number I doubt we'll reach. Is it time for consider the future (change of name or status) ? 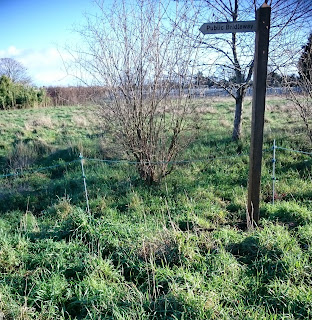 You may recall this was on my last ride of 2020. It's  disappeared! And one kissing gate has been 'improved' with builder's rubble so you may have to dismount.

I've reported this to Surrey CC but as it's priority 3 not much hope of immediate action.

They must have been reading my thoughts as the proforma Annual Return turned up the same day! No advice on how to stage an AGM which must take place before the end of May.

Posted by RaasayWarden at 09:59 No comments: