An Outing to Thorpe Park

Well .. to the outside at least.   I set off on an afternoon that could have been summer, to find the mythical footpath to Thorpe.   I'd never been there, having read enviously about several B rides that went that way.   Hard work against the wind to Chertsey, and then down Willow Walk, a little lane I remember from my early days with the Wayfarers, narrowly missing Chertsey Abbey, which I will have to go back and explore at a future date.  Past some delightful houses, and then onto the track over the M3, which was ridiculously well signposted, but not in a good way. 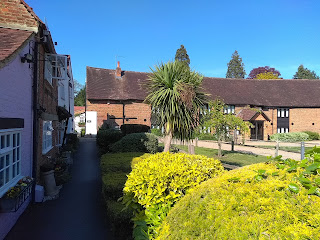 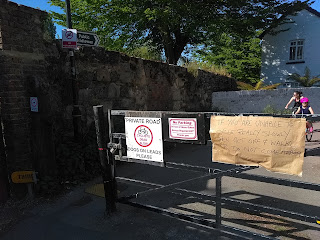 There was a lake to get past: my careful research told me "keep to the left" which was a mistake.  The path was churned up by horses hooves and then sun-baked.   Emerging the other side, I found a nice track had gone round the other way.   Then my research told me "stay near the M3 to get under the Staines Road".   Unfortunately the version of OpenCycleMap I was using must have been rather out of date, as it then led me on a narrow path through nettles to the rusty skeleton of a bridge over a stagnant sort of moat.  On foot I might have tried it, but there was no base to the bridge, just holes between the iron framework, so I retreated, prepared for a return to Chertsey. 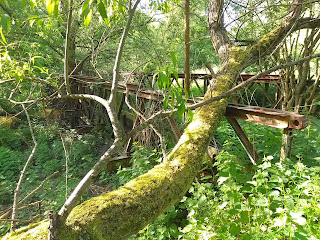 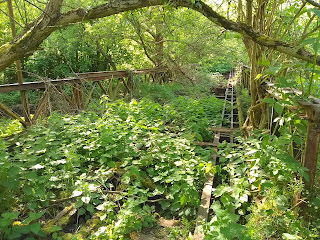 Luckily there was another way round, and I found myself on a delightful, if shady, path along the perimeter of Thorpe Park, with intermittent views of trains, old Wild Water rubber rings, and some of the roller-coasters towering overhead. 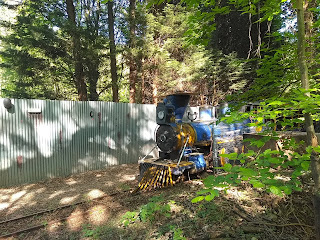 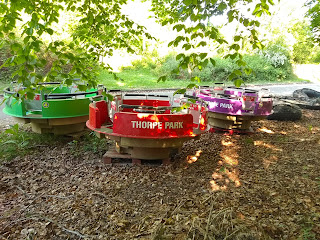 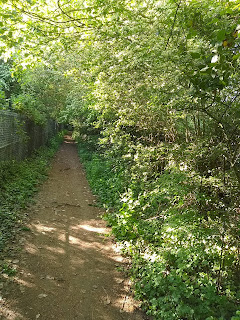 Thorpe's a pretty village to emerge in, and so I meandered down what I thought was a dead-end road leading to the river, only to find myself on the main road between Chertsey and Staines again, across the river from Staines. 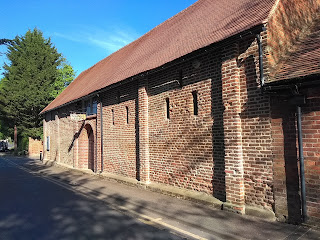 With the wind behind me, I trundled home across Shortwood Common, the change of nature's alphabet well under way as crocuses and camellias have given way to hawthorn and horse chestnut blossom.  Returning through Ashford, I was very impressed by the show of support for the NHS that the shopkeepers have organised there. 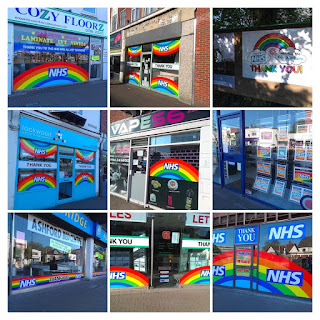 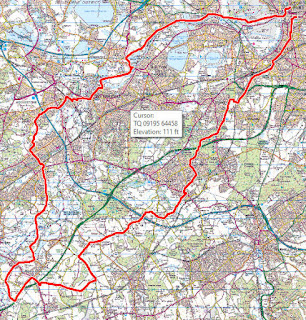 I expected cyclists but never this many with all groups (excluding families)  four or less.

No surprise that I was overtaken constantly before Walton Bridge but they were everywhere! I even passed three family groups on the concrete road near Send prison. The only time I was free of them was crossing Esher Common (hard work on my road tyres) but plentiful walkers despite  Elmbridge closing many of its car parks.

Not a regular route of mine, I passed the old Dairycrest HQ in Claygate which is going residential. The red you know what is still there (TQ148644).

Last Thursday I met Dave coming the other way in Hersham before sampling the footpath across the golf course south of Wisley Bridge. What a contrast to the sewage works and Muddy Lane on the other side of the road. Without any guided missiles, it was a delight being tarmac'ed except at the extreme ends. Only problem - it doesn't go anywhere (ok, to the canal).
Posted by RaasayWarden at 16:17 No comments:

Let’s Be Careful Out Here 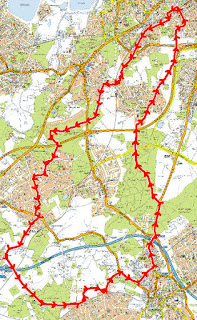 Yesterday's ride starting/finishing in Surbiton (where I rode past the  resting Jenny and Dave). Plenty of walkers and cyclists but you'll have ask Mr Gove if they were "exercising". And with car parks closed it seems one can now park anywhere! But I mustn't moan too loudly as my mileage topped 25 miles.

Simon's herd of Belted Galloways looks like the herd I past on Muddy Lane last Tuesday. If there have been changes, I didn't spot f them.

I don't know Simon's route across Boldermere but the byway (Elm Lane?) from Elm Corner to Old Lane is the worst I know and unrideable even in summer.


Posted by RaasayWarden at 15:08 No comments:

The C&M blog has become a bit of desert since the lockdown, so here's another attempt to spur some others to write about what you've been doing.  Come on - surely you haven't all been neglecting your daily exercise in such lovely weather?

Since the restrictions on cycling, I have been enjoying 'cycling rambling' on many days.   Rather than a bike ride, which sounds quite purposeful, I've just been setting off to explore areas not too far from home, maybe getting a bit lost, and discovering what's there.  It's been very enjoyable: even the urban rides are interesting but there are loads of parks, heaths and commons dotted around, often very quiet.

Yesterday I was a bit out of my normal area, delivering a Sou'Wester to Bill Squirrell, so I wandered off south to the area of heathland around the crossing of A3 & M25: Wisley and Ockham Common.

South along the Wey past Manor Farm with woolly cows...

Then a sort of zigzag of tracks of varying quality on Wisley Common, gorgeous pond there by Pond Farm, then across the A3 on the Wisley footbridge.

After several attempts, I managed to find a track taking me to Bolder Mere just south of the A3: it wasn't a good idea, quite muddy and in several places boardwalks had been laid across the mud: I wasn't brave enough to cycle along them.  Putting a foot down in the wrong place would end up with falling in the swamp!  Emerging near Ockham Bites, I then followed a route across Ockham Common that Keith showed me last year, to the semaphore tower on Chatley Heath.  Disappointingly it's covered with scaffolding at the moment.  Then down via Pointers Road to Plough Lane and Cobham, familiar territory.

Not quite finished with off-road rambling, I set off north-west from Cobham along Hogshill Lane and the more or less straight line of intermittent road and path (another one of Keith's routes) to Fairmile Common and Esher Common, round the back of Claremont and popping out at Claygate.   Most of the time was spent in the woods or on heathland, and the weather in late afternoon was gorgeous.  You could easily spend a few days just exploring all those areas. 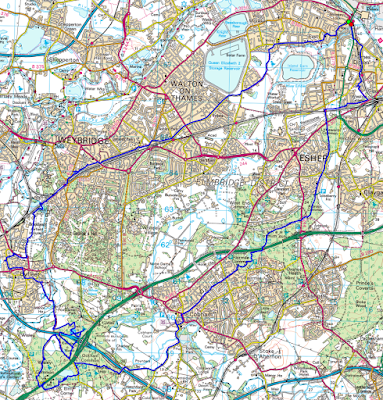 C&M Easter Tour - not dead, just pining for the fjords

Man walks into a shop:  "I want to return this Easter Tour" ... you can fill in the rest yourself.

This weekend, we should have been enjoying delightful company, great beer, lovely cafes, beautiful plumage, sunshine! and a bit of cycling thrown in for good measure, in the delightful environs of Salisbury, formerly best known for Novichok.  Now we have a new worry.  Not only are we not allowed to touch 'items' in case they are contaminated by Novichok; we are also not allowed to go near 'people'.  We have learned some new words: Social Distancing for example.

Last year we saw some terrible examples of failure to socially distance.  Don't do this, folks!

The point of this post is partly to remember the good times and look forward to their return, but also to thank Steve and Ann, who did 99% of the work of organising the tour before it had to be cancelled, creating even more work, so they have now done at least 120% of the work required to organise the tour.   With luck and good behaviour by the great British public, the tour will be rescheduled to next year and be even more successful.   Plus, it will only require -20% of the work to organise it...or maybe we could revive it by putting four million volts through it.

Thank you, Steve and Ann, for this year, last year, all the years you have organised this great event.  I'm sure everyone who has been on these tours is extremely grateful to you for what you do.
Posted by Simon L at 23:28 1 comment:

The Fairfield has spoken (though few are listening) 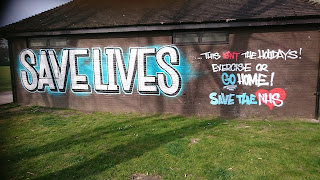 Posted by RaasayWarden at 10:23 No comments:

Everything's closed (great!), nobody around (better!), and everything's drying out nicely so all that's needed are a few more off-roaders to flatten out the bumps.

In days gone by I'd noticed a "hole in the fence" at Gaston Bridge and wondered where it led. Well as the map shows to Ash Link nature reserve which straddles the M3 at the end of Nutty Lane (or to the clubhouse opposite the dump). 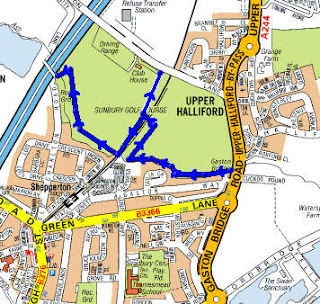 .
A number of (dog) walkers, runners and flying golf ball warnings so the public has I assume permissive access. The nature reserve has been tarted up and is next to garden centre which surprisingly was open today (but for how much longer?).

Posted by RaasayWarden at 14:33 No comments: