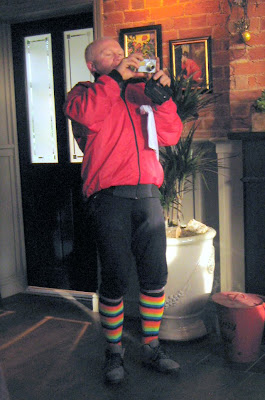 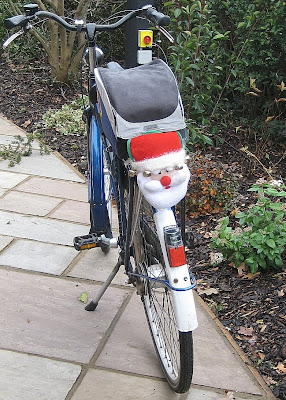 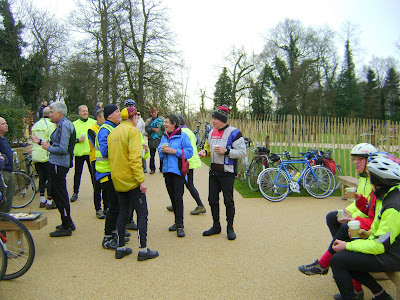 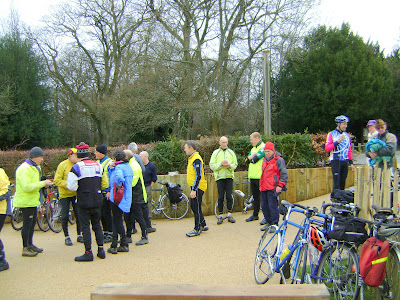 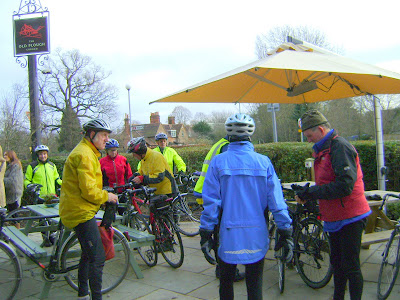 A nice leisurely start for everyone as the ride is a 10am meet at Ewell's Green Man,although your section secretary managed to go to NC......& Richard had us down for Ryka's for 11's.But it was the servery at Boxhill we were heading via the rather expensive houses in Ewell Downs Road/The Green where it's typically "4 beds,4 baths,4 receps" and an asking price of £1.2 million.Why would a house need 4 bathrooms?
We pedalled over Epsom Downs,Langley Vale up to Headley and arrived at a little after 11.15am to meet amongst others Ian,Pete Beyer & wife,Irene & most importantly,my mother & father who with no arm twisting whatsoever,provided the gathered with warm mince pies & bread pudding fresh from an oven in Dorking
The intention for the short ride to lunch was Westhumble,across Bookham Common then Downside to The Old Plough at Stoke d'Abernon.But the majority decided that the previous day's considerable amount of rain and/or the 20% incline of Bagden Hill was enough to persuade them otherwise.
As it turned out,it was maybe just as well because I managed to get lost on the way!
Bookham Common is the Bermuda Triangle of Surrey but Terry and myself emerged unscathed to find some tucking into mushroom soup.
After an hour or so,we all went our separate ways and for me I had time to buy some (rare) food bargains in Sainsbugs.
Merry Christmas!!!!
(unless your reading this sometime in the coming days in which case........hope you had a good one :-)
Posted by Tartan Socks(long) at 20:20 No comments: 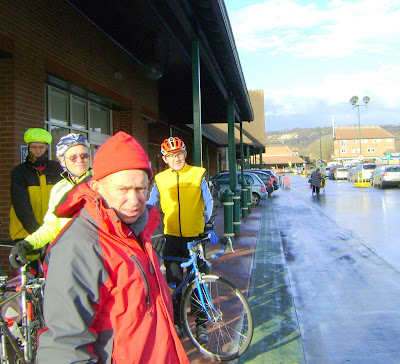 It has been a great idea to meet at differing locations this autumn rather than at the aesthetically challenged North Cheam junction of the A24.
This Sunday I met Steve and Andy at the Oaks Park café.
We decided to have a coffee before setting off.
Although not in keeping with the spirit of the discussions at the AGM there was on this occasion good reason – as the temperature had dipped below zero during the night this would leave a little more time for the ice to melt.

With our caffeine boost we pedalled up to Woodmansterne thence to Coulsdon, across Farthing Downs to Chaldon. By and large any ice that had formed had melted but there were a few frosty patches around Spring Bottom Lane to keep us, so to speak, on our toes – we want to keep our collar bones intact for the festive period. No such concerns along the A25 and by the time we reached the Oxted turn-off the rising temperature ensured a frost-free pedal to meet up with Ian and Terry for elevenses at Morrisons.

Setting off through Oxted old town we joined Tandridge Lane. Then along Croydonbarn Lane turning off to Horne and the only hillette on this leg to take us to the windmill at Outwood and on to our lunch stop at Wasp Green.

By now the temperature was falling and the sun paling and there was some discussion as to whether to stop for tea. Generally the feeling was to go straight home. Pedalling up Markedge Lane we saw a rainbow. But this was not good news. Pausing at Fanny’s Farm for a breather we decided not to stay for tea. This was a good decision. The sky soon darkened, at first drizzle and then a short sharp hailstorm as we cycled down Hazelwood Lane.

All in all a good December ride for probably the first Sunday with an average seasonal temperature compared with the hitherto mild autumn this year. For me, from Balham, the mileage recorded was 62.

From Mike.
Posted by Tartan Socks(long) at 17:37 No comments: 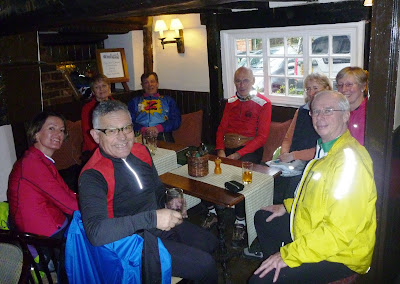 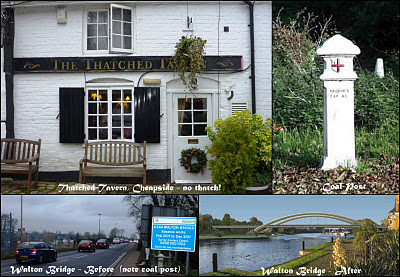 Sunday 11th December 2011: Kingston Bridge-Fairoaks Aerodrome-Cheapside Thatched Tavern-home
A good day out in what turned out to be dry weather. But marred by the ride leader’s two back wheel punctures.
From Kingston Bridge, five of us cycled to elevenses by a mainly direct route, with minor scenic diversions at Shepperton Marina, Walton Lane and Victory Park.
I discovered my first puncture of the day just before we were due to start from elevenses. So it was nearly 11.45 when we left Fairoaks and cycled, on largely car-free roads, via Burrowhill and Windlesham to Sunningdale where my second puncture occurred. We managed to pump up the flat sufficiently for me to reach the Thatched Tavern at Cheapside near Ascot at about 1 p.m.
My grateful thanks to Terry and Jeff for their mechanical help. Jeff sacrificed part of his lunch hour to patch one of my inner tubes and then sacrificed more time to refit a rear brake pad (I had trouble releasing the brake mechanism on my non-standard brakes, so had to push the wheel and tyre past the brake pads to get the wheel back into place. This dislodged one of the brake pads and it proved difficult to refit it securely.)
After a good lunch, we left the Thatched Tavern at about 2.15 p.m. Soon afterwards, the group divided. Some went through Windsor Park to Egham, while others followed the leader through the Wentworth Estate and on into Chertsey. Most got home as or before darkness fell.
There were 13(?) of us at elevenses, but some went straight home. Attendees on the ride from elevenses to lunch were Carolyn, Irene, Nancy, Pam, Stephanie, Graham, Jeff, John, Terry.
John Gould
Posted by Lisa at 21:36 No comments: 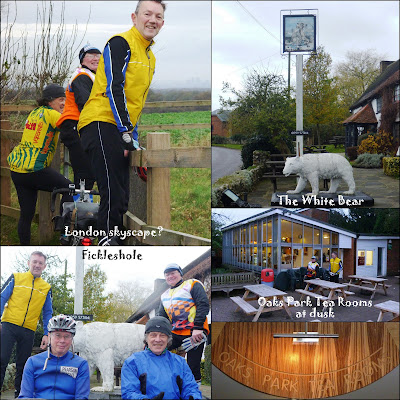 We made a two pronged approach to Redhill Aerodrome, one from N.Cheam (Andy and Grant) and one from Tadworth (Stephanie and a coughing and spluttering Jeff). The Tadworth flight path was via Chipstead, Merstham and Cormongers Lane – a novelty to Steph, whose grandmother, I learned, was a customer of Fullers Earth. We converged on the aerodrome café and were joined one by one by a number of lone wolves. The mess was crowded, a magnet for the local constabulary, Epsom RC and a large party of breakfasters filling one room. The C&M contingent was: Steph, Andy, Bob, Daniel, Grant, Graham, Mike, Terry and Jeff.

With time for a bacon baguette and reflection on the next leg to lunch, all options seemed to offer an exhilarating ascent of the North Downs, to be missed by some with suddenly pressing domestic luncheon duties. Thus it was that nine became four, with Andy, Graham, Mike and Jeff heading off for them thar hills.

With Fickleshole not a million miles away there was no rush. After S. Nutfield we took two farm tracks: one licit – He

nshaw Farm, and one I am advised not so licit – Cuckseys Farm, to reach South Park Lane and up to Tilburstow Hill. Past Godstone Farm we took Love Lane and Bulbeggars Lane to Church Town, where we really should have paused to admire the exquisite St Mary’s Almshouses.

Our focus, however, was to cross the A25, A22 and M25 and embrace the swelling, sensuous contours of Gan 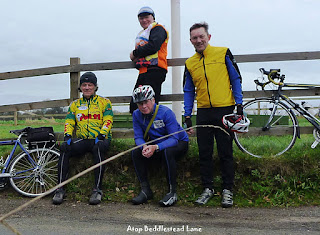 gers Hill. To a man they took our breath away and left us flushed and quivering at the summit. We then had time to gather our strength along The Ridge to Clarks Lane, a northward plunge down Beddlestead Lane and the sharp reminder of the power of gravity at Hesiers Hill. From here, it was no more that a tootle to our target, the White Bear at Fickleshole, where we arrived as the bell tolled one.

The pub was full of Sunday diners, but with not a sandwich in sight. Bread and soup met our simple needs. After lunch, Graham made an early start for home as the rain began to fall. The rest set off and were briefly tempted by the beckoning N21, High Hill Road; but the mud, the incline and the wooden sign which read: ‘STEEP DESCENT. EXTREME CAUTION’ dissuaded even the most adventurous from sure disaster. Tarmac won the day, so it was Scotshall Lane to Farleigh, Croydon High and Croham Valley Rd to S. Croydon. A twist and a turn took us past Whitgift School and along Pampisford Rd to cross the Purley Way and meet Foxley Lane. It was then just a gentle rise along the A2022 to Oaks Park, still in daylight. The Tea Rooms close at 4pm, but we enjoyed our tea and cake before heading home in the drizzle and early December gloaming.

This was a first visit to these tea rooms and will not be our last. We meet there again at 9.15am on 18 December to start our ride to Oxted and Wasp Green.