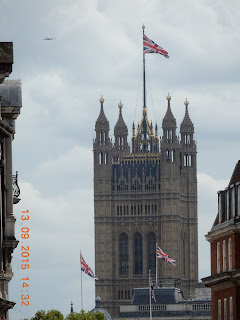 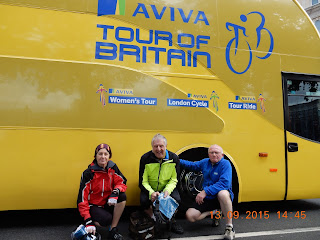 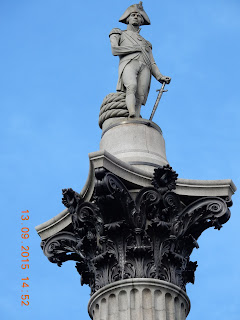 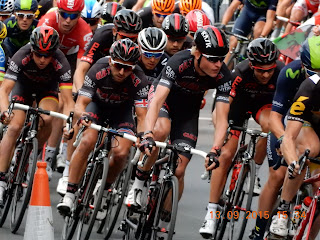 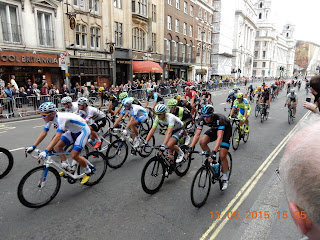 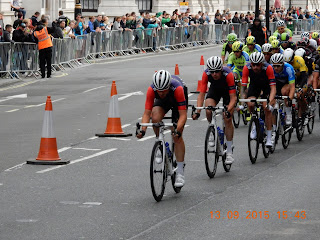 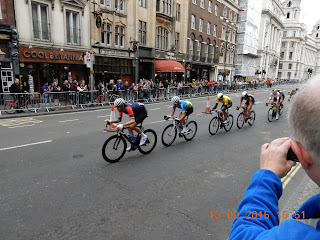 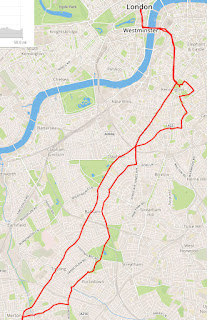 Once again for the record!

In dribs and drabs 13 turned up in bright sunshine at Hilliers Sunningdale; many indulging in the special offer of bacon bap and pot of tea for £4.50. All my informant could recall was that the official party came from Hampton Court via Windsor Great Park.

Leaving Don behind, we continued westward along the A30 then turned towards Windlesham, Bagshot and back onto the A30(!) near to the newly opened Waitrose. One mile later we turned at the American Golf (ex Jolly Farmer) roundabout onto the B3015 to begin the gradual descent to Deepcut. Frimley Green was reached via B3012 and the familiar track (now widened but not resurfaced) brought us to Farnborough North. Tilly Shilling (Wetherspoons) just before 1230 was the lunch stop with Terry already in attendance.

One hour later and after a swift tour of central Farnborough (including the Queen Elizabeth Play Area) we headed back the way we'd come. Unusually Dave took us past the home of darts and down to Deepcut thus repeating a part of the morning's ride. We continued through Pirbright, Bisley, Chobham, and Burrowhill and finally past St Peters Hospital. Here the early bathers turned right and the cake eaters turned left for Great Cockrow. Around 65 miles door to door.

Posted by RaasayWarden at 11:56 No comments: 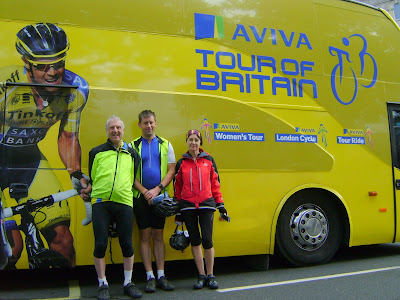 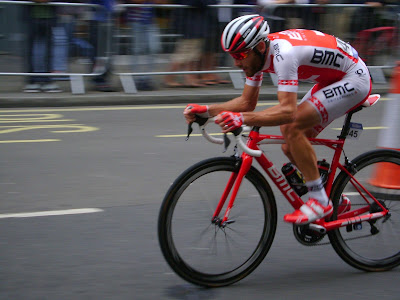 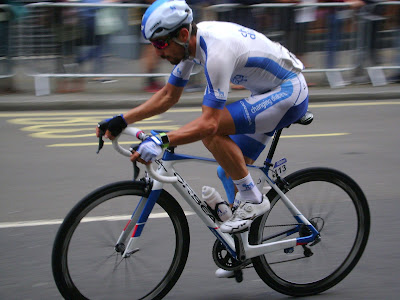 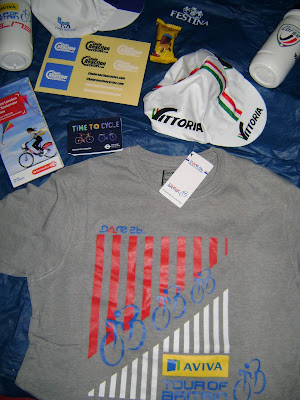 Freebies and paid for merchandise


Tour of Britain in London means only one thing.............riding the Wandle Way to Merton Abbey Mills.
From there I wanted to see if the ridiculous barrier at the northern end (Figges Marsh) was still in place...........it was.
With some careful manoeuvering we all emerged unscathed.
I decided the route as I rode along but trying all the time to ride parallel to CS7.
Amen Corner,Tooting then the climb of Rectory Lane.
At the top you can ride across Tooting Bec Common to Cavendish (poor Cav) Road then Abbeyville Road.
Right then left to Bedford Road and Landor Road by Clapham North tube.
Going east - Sidney Road,Robsart St & Loughborough Rd to pick up a signed cycle route going north to Kennington Park cafe for coffee.
We were in the Lord Moon of the Mall by 12.15 and after a leisurely lunch, I thought a walk over to Trafalgar Square would pass the time.
Here we found a number of cycling related companies including http://www.splash-maps.com/ - fabric maps that at first I thought were t-towels.
The race started on time at 15.30 and from our position on Whitehall we saw the riders pass at regular intervals.
Mike M joined us for a short while before I decided to leave an hour into the race.
It was CS7 for the bulk of the return ride.

My plan is to basically aim for the Lord Moon of the Mall (Wetherspoons) for an early lunch and a viewing point as the race passes right in front (in both directions).
Because the race is starting late (15.30) I plan to leave at around 16.30 and arrive home around 18.00.

Posted by Tartan Socks(long) at 19:30 No comments: 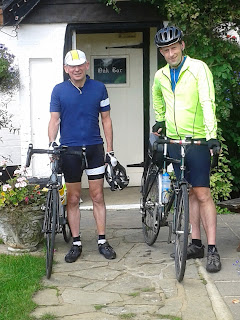 Lunch at the Punchbowl 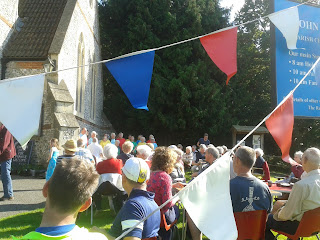 Tea and sing-song at St John's N. Holmwood
Our appreciation to Dave for a most enjoyable early autumnal ride. We shall forgive him the slight ambiguity between Tanhouse and Tanhurst!
Posted by Jeff at 19:20 No comments:

Bob was already at Tanhouse Farm when I got there; Jeff, Paul and Allan arrived later.

The route to lunch had to meander a bit since Okewood Hill was not that far from the revised elevenses stop so we left Bob and headed northward towards Newdigate.  Allan was heading home so he continued onwards as we turned onto Church Road.  We continued along the road toward Partridge Lane passing a sign saying that driving slowly would preserve the road surface - it hadn't.
We rode to Rusper, then past Capel to cross the A24 onto Cole's Lane towards Forest Green. I had added an optional climb up Holmbury Road but no-one seemed keen so we stayed on the low road.  After Forest Green we looped round to the south eventually passing though Walliswood to approach our lunch stop, the Punchbowl Inn, from the west. Lunch was in the garden under the sun.
Later we headed South again circling round to ride a zig zag route back to Forest Green.  I had modified this part of the route to avoid a duplicated section after the reconnaissance using the little Google man. Unfortunately I hadn't sent him quite far enough down one of the legs so we had a short traverse on an unsurfaced path.  Luckily the weather had been dry so no mud.
After that a climb on Tanhurst Lane passing Coldharbour to the outskirts of Dorking where we descended to the church at North Holmwood.  There, as well as tea and cake, we were treated to music from a visiting choir.
Afterwards I opted for the scenic route along Inholms Lane and  Punchbowl Lane while the others headed along the A24.  I rejoined the A24 after Pixhams Lane in time to see Jeff waving from the far side of the road. Then Box Hill and home via Kingswood. For me 65 miles and another day of pleasant weather.