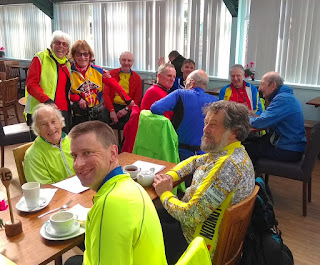 A perfect autumnal day for cycling: cool but frequently sunny but no breeze.

An  'extra hour in bed' left me with time to explore and to make an easy decision: not a day for off-roading.

As the evidence shows at 11s we were 12 though Bob and Paul went no further.

But I didn't write no off-roading! So after a Vineries - Effingham Junction - West Horsley - Jury Farm zigzag we headed onto the concrete farm road. Ann punctured beside the only wayside cottage and its baying hounds. 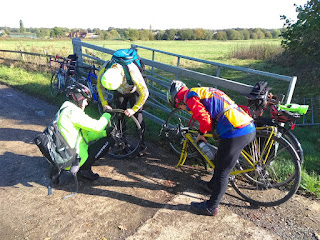 A subcommittee was quickly formed. From bags appeared tyre levers, inner tubes, toothpaste tubing, etc. Progress was slow until half forgotten tweezers were found to extract an offending thorn and a new inner tube fitted.

Pumps were tried and rejected before Dave's mini track-pump registered 100 psi and we were off. The advance party had waited patiently close to a new housing development on Tithebarns Lane.


Then it was beside the Wey to Cartbridge and Old Woking. We went over the roundabout into a car park and out across a recreation ground. A shady footpath leads from Coniston Road to White Rose Lane. It's less than pristine and hides sleeping policemen. But from there a signed cycle route leads more or less to Woking station where sherpas were on hand to carry bikes up the steep north face of the subway.

We were in Wetherspoons just after one. After brief discussion the tea decision was the tow path and Addlestone. Ed, Dave and Vic went their different ways, and Terry turned off at West Byfleet. We left the canal at Scotland Bridge before running into A318 gridlock (garden centre traffic?). The Golden Cafe closes 1500, Gregg's has no toilet so we crossed to the Olive Tree (£2 for tea and muffin).

Images from Simon via C&M WhatsApp.
Posted by RaasayWarden at 09:07 No comments: