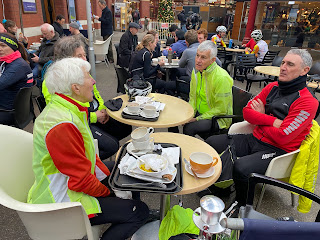 The morning began very murkily and I wouldn't have been surprised if I had been the only person at elevenses, but, as I sat trying in vain to warm my hands around a hot coffee at the (outdoor) Little Green Boat Cafe, Staines, fellow cyclists gradually started to emerge from the gloom!    I felt strangely like Scrooge in 'A Christmas Carol'!   In the end I had been joined by Steve D, Simon, Graham, Pam, Daniel, Carolyn and Gemma and family, and I'm quite sure they weren't ghosts!

After a false start owing to a puncture, Steve, Simon, Graham, and Pam joined me for the ride to lunch at Cinnamon Cafe, Windsor.   We were all rather cold by now, to say the least, but  a steady pace soon had the blood warming again!   A number of tracks and trails were involved, but, thanks to Graham's skilful navigation, mud was avoided!

The Cinnamon Cafe was busy as usual but Simon found us a table with a heater in the inner courtyard, the counter service was speedy and efficient, and the atmosphere was great!

Being partially outdoors stopped us from getting too cosily ensconced when it was time to set off for home.  Our departure was slightly delayed by the threat of another puncture, but Graham warded off the danger with a few quick strokes of his Zefal pump, and Pam set us off at a brisk pace up Sheet Street, not wanting to tempt fate by hanging about!    Pam left us at Egham, Graham soon after, and the rest of us dispersed into the growing gloom at Walton Bridge.

Thanks all for your company on such a miserable day!

The elevenses meet will still be at Staines but at The Little Green Boat Cafe, Lammas Recreation Ground (instead of Wetherspoons).    Lunch provisionally at the Cinnamon Cafe, Windsor. 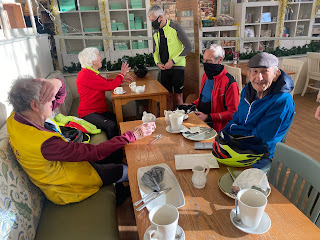 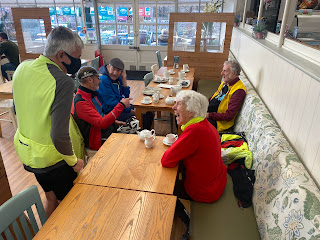 The weather was very pleasant to start, and much milder than of late.   Bob, Steve D, Simon, Ed, Keith, Graham, Pam and I had a convivial elevenses at Squires Garden Centre, and were pleased it wasn't too busy or crowded.   It was still sunny when Keith, Graham, Simon, Steve and I set off for lunch at Stoke Park, Guildford.   Our route, rather daringly for this time of year, took in three off-road sections.  It was a bit of a gamble but, fortunately, we didn't encounter any serious mud. 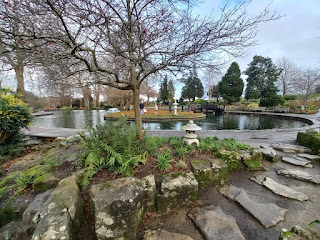 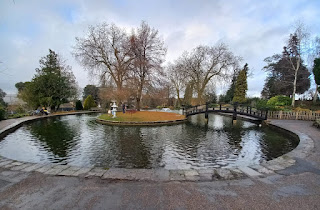 Taking advantage, of the clement (we thought) weather, we decided to have lunch at the outdoor cafe, Stoke Park (excellent pictures of the nearby Japanese garden courtesy of Simon).   The food choices available seemed to meet everyone's requirements with fish fingers appearing very popular, but our al fresco lunch was slightly spoilt by the sudden onset of showery rain not mentioned in any weather forecasts!  Never mind, it wasn't too bad.

Skies continued to look threatening so we took a direct route homewards, via West Byfleet instead of Ripley for a change, and we were shocked and amazed to encounter Patrick travelling in the opposite direction at Send.   The parting of the ways was at Walton Bridge.

Thanks all for your company.

An overcast cold and occasionally showery morning led to lengthy gossip at Old Moat before we headed our various ways home.

Posted by RaasayWarden at 06:59 No comments: