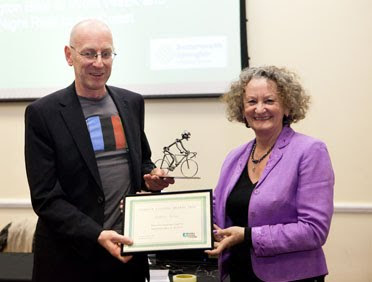 Grateful thanks to Steve Rutherford for permission to reproduce this photo.

Congratulations to Simon on being joint winner of the London Cycling Camaign's 2010 award for the Best Non-Competitive Cycling Event. This was for his superb organisation of the monthly Friday Night Rides to the Coast, under the banner of Cheam & Morden CTC. The FNRttC involves a huge, personal commitment from Simon, as well as the support of a loyal band of helpers from far and wide. This is what cycling is all about. Well done Simon. We are proud of you. 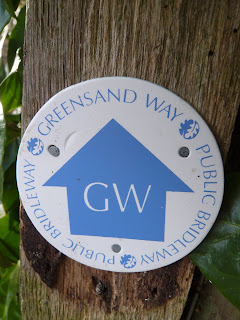 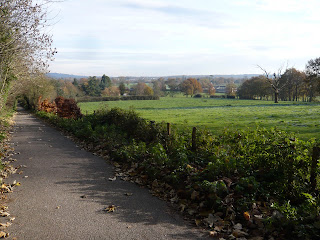 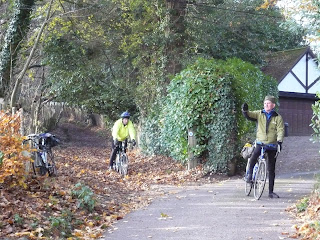 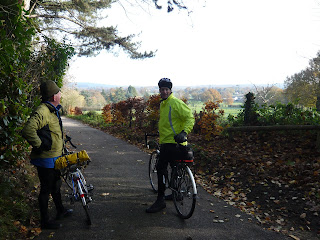 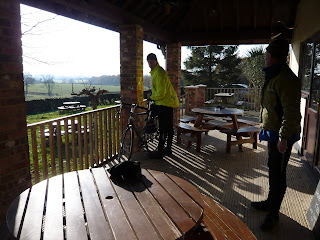 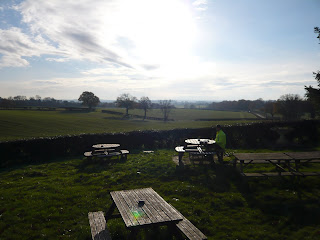 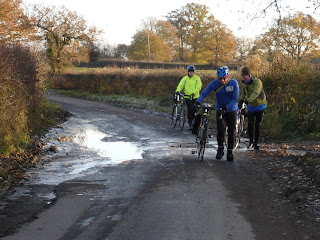 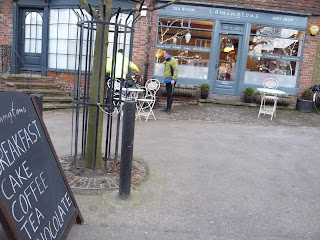 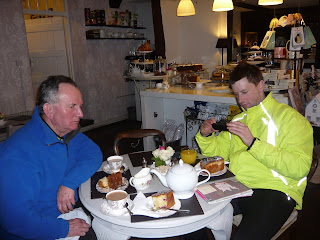 Brrrrrr just -7° and looking like Michelin man I set off for NC arriving at 9:03am to find myself alone for a short while........until Richard turned up.
The two of us set off through Cheam, along Cuddington Way, Banstead and Chipstead to pick up Stephanie on the top road. Wary of ice, gingerly we freewheeled down past Fannys to join Bob & Dave in The Quality Café at Merstham.
100% awarded to this greasy spoon (coffee 80p per mug) and a free second cup. Long opening hours too......8-4 on a Sunday.
Paul & Jeff joined us on the short distance to Staffhurst Wood's Royal Oak. The route being A25 to Nags Hall, the tiny lane leading to a rough stuff(r/s) temptation........the Greensand Way (see pic) between Tandridge Court & Broadham Green. Jeff turned back but the majority were rewarded with beautiful views (see pics) and a dirty bike.
I like this pub mainly for the wonderful position overlooking the Surrey/Kent border (see pics).
Soup was just £3.95 and a must on such a bitterly cold day.
Typically for this area, ice can occur just about anywhere (see pic).
A second bit of r/s in the afternoon proved a bad decision.....but a new café at Bletchingley was a great find......delicious cakes too (see pics).
Paul headed west whilst Richard & myself went north....home via Farthing Downs & Coulsdon.
An enjoyable day.

Nice little film called "City of Joy"........a cool video of the Budapest Critical Mass. I love the
speeded up cyclists going around the city on a beautiful Spring day in April this year. The tune is good too..............enjoy.

Eat, drink and be merry, for tomorrow ye diet! 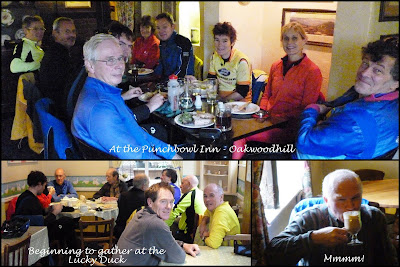 A very cold dark morning saw 8 of us at North Cheam, Steve G, Mike, Janice, Andy P, Andrew, Matt, Keith and me. Chose a long route to Shere through Cobham, Effingham Junction. We had 2 punctures on route, Andrew first then Keith. So arrived at lucky Duck 20 past 11. Where Bob, Andy C, new Tony, Simon W, Jeff, Graham, Pete B, Pete F, Irene, Alan A and Terry were waiting patiently. Time for toast and tea then a short ride at quite a cracking pace to Oakwoodhill, via Ewhurst. Simon ordered the biggest baked potato ever seen in Surrey, but could not finish it. Pete Beyer asked if we would like to see his pole dancing skills around a pole in the dining room, but we declined!! Only 2 miles to Capel church where they let us in at 2:30. Jeff disgraced himself by ordering sandwiches and cake which he couldn't eat after a heavy lunch. Just as we left Keith Butler and wife arrived by car for cakes. Got home in the dark just after 4pm. 55 miles.
Jake

Posted by Tartan Socks(long) at 17:25 No comments: 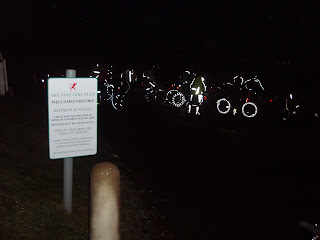 The last FNRttC of 2010. Not a bad night for weather bearing in mind the time of year and 79 riders spurred on by the thought of a congratulatory drink in Brighton. Not the usual route this time avoiding Ditchling Beacon but instead Devils Dyke as can be seen from the golf club car park believe it or not at 7.05am, looks more like the dead of night. 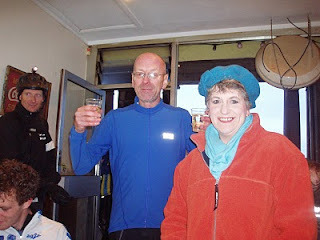 Simon was in good form supported by his band of followers congratulating him on his latest award from LCC
The picture above shows him with Antonia from the Martlets providing some Bubbly as a thank you to all who helped and raised a magnificent sum of over £50,000. for the hospice with an even more ambitious target for next year! Come on the C&M and other men (& women) of like mind from the MWW etc try the Martlets FNRttC next year it's good fun and good for the spirit! Never before has so much been given by so many to so few and very deserved too. If you are unable to ride sponsor some one who can and put £1. a week aside from now until then! 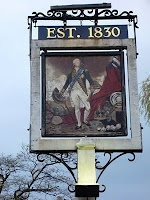 Refuge from the deluge, sheltering beneath the Sky TV at the King William IV.
Is Paul looking into Pam's eyes or at the Grand Prix? 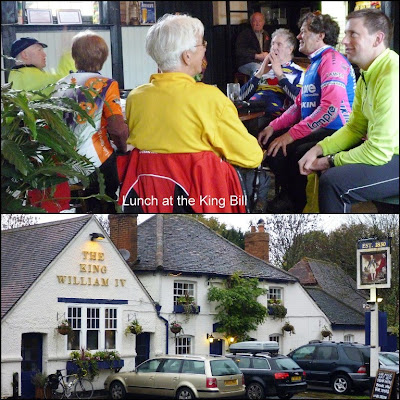 But for a topple this would have been John's debut ride. After a dead fox by the gasworks, there were just three awaiting a leader on the bridge including new boy, Alex from Twickenham. Bushey Park, Lower Feltham (via the spiral), BP and Charlton was thirty minutes too soon at Nutty Lane so an extra loop via Lower Shepperton and the watersplash was needed to reduce this to ten.

BBC got it right - dank and overcast become steady rain on departure with only nine (of seventeen) eager for more. After wiggles through Walton, Weybridge and Woodham the countryside round Ripley was briefly and barely in view before we reached the William IV in West Horsley - a pub in name but a creche today. After our soaking we were more than happy with the empty public bar and prompt service. The promised afternoon clearup did not happen (at least not until the evening and first frost of winter) so there was just a quartet for a short splash to Sainsbury's Cobham and home - under 50 miles including detours. 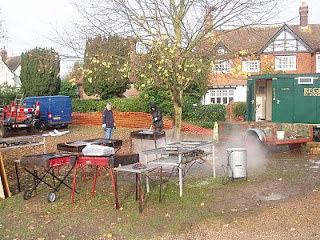 Cleaning up the kitchen! Reminds me of my old hosteling days and cyclo-cross. 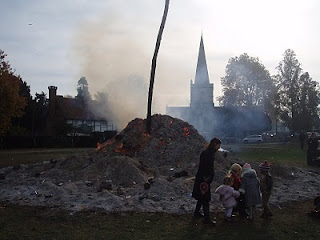 Ashes to ashes and the church veiled in smoke. It was a hell of a site. Guy Fawkes was on top of the pole full of fireworks before he exploded! 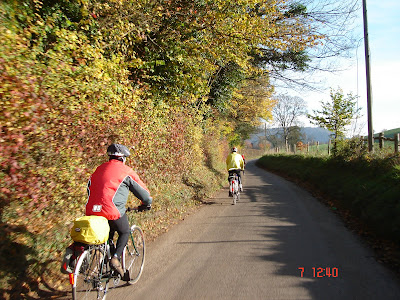 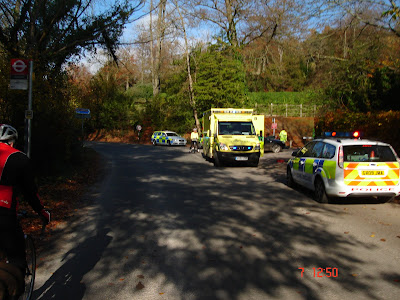 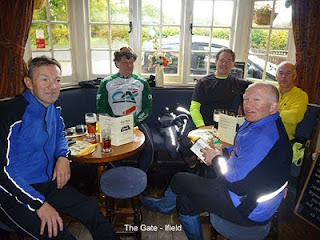 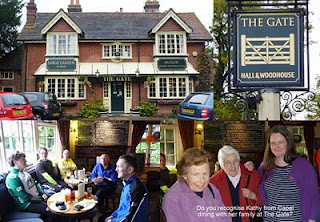