The Bounty at Bourne End 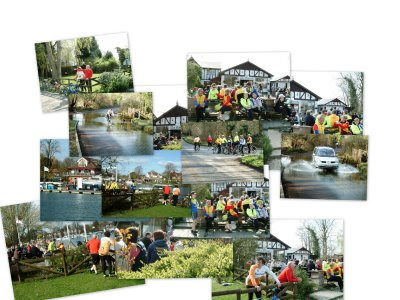 Today’s ride started with 6 at the N. Cheam starting grid: Grant, Jake, Jeff, Keith, Norman and Paul. En route to Kingston, Jake provided the magnetically challenged Jeff with a steady compass point through Kingston (with one or two following a magnetic variation) to Kingston Bridge. Here we were joined by a supercharged Stephanie on her new titanium steed and John G. From here it was a familiar, urban route more or less following the river (no hills) to Runnymede, where 7 were gathered around the urn – Alan, Andy, Ann, Bob, Graham, Irene and Steve.

After a decent interval, all bar 3 (Alan, Bob and Norman) set off for Bourne End, following the Thames with the road still flat but heading into a fairly stiff N. Westerly wind. The route was via Old Windsor, Windsor footbridge, Eton College, Eton Wick, Dorney, Taplow, Cliveden, then down Hedsor Hill into Bourne End – the end of the line (except for a branch line to Marlow). A lane before the station led to the railway bridge, when some portage was necessary to get onto the footway by the single track line to cross the river. A final push along the ‘no cycling’ towpath took us to the Bounty. 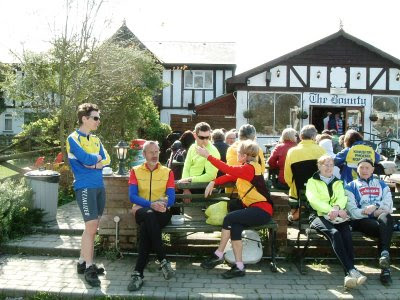 Though open only at weekends and inaccessible by car, the Bounty was heaving with, I believe, a 2 hour wait for food. This time, there was a smile of contentment for the sandwich eaters. After a drink, a chat and rest in the sunshine beside the river it was time to return. The plan was now to head for Staines to the N. and E. of Slough, rather than back via the flatter and more urban outward route. Brief recourse to the Ordnance Survey guided us out of town up Harvest Hill. Then the reins were passed to Graham to take us to the North of Burnham Beeches through some lovely lanes and tracks across Woodburn Common to Hedgerley. One minor spill by Steve on the loose surface was happily without damage to man or machine. 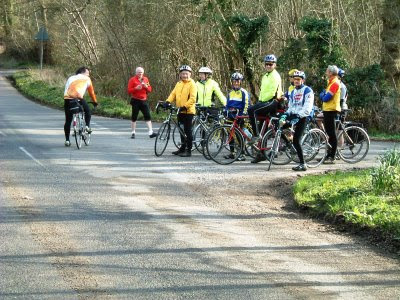 We then pressed on to Fulmer, with a nearby ford not in full spate, past Pinewood Studios to Iver Heath and Iver. By now the landscape was becoming more industrial as we roughed it across Ritchings Park to Colnebrook, Poyle and Staines to come to rest in the Market Place beside the old Town Hall.

Here, all were invited in for tea and cake by Irene. Most said ‘yes’ to tea and homebaked fig and walnut cake. With the sun now lower in the sky and some distance still to cover, the party gave thanks to Irene and mounted up for a wind-assisted canter back. At Esher, the final group split up to wend their ways to hearth and home.

This had been a fairly long day, with 6½ hours in the saddle and a distance of 85½ miles travelled to reach home at 6.20pm.

Jeff
One I took Earlier 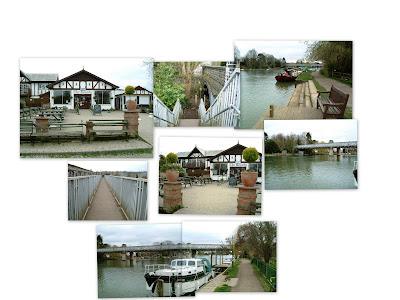 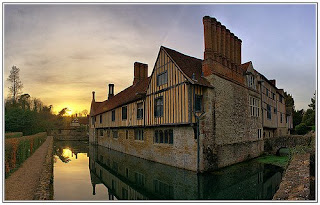 A select few (Andrew, Keith, Janice, Jake, Paul, Ray, Jeff, Norman & Richard) joined me for a ride into Kent, a beautiful county but with some vicious hills.
I chose the route via Woldingham to arrive at Westerham before 11am. Ray returned before 11's, Andrew as usual rode off to an unknown destination leaving me to head north to pick up the Pilgrim's Way and we rode eastwards toward Otford, Kemsing and south to lunch at Ightham.
The first pub appeared unsuitable (roasts only) but for sandwich eaters it was perfect, a table in the sun....................... watching Norman attend to a puncture.
The remainder, totalling 4, continued in search of that reasonably priced meal but ended up at The Snail in Stone Street where deep pockets were required - £4 a pint?????????
After regrouping, except for Norman who for reasons remain unclear, we continued along the ridge to pass south of Knole Park, Yorks Hill to Ide Hill where we were rewarded with a fast decent into Brasted.
That's where the fun ended because to reach Downe we needed to go up,seriously up and because this Kent, survival of the fittest was in evidence as we approached Brasted Hill, a one arrow hill that dropped us into Cudham and tea.
Richard reappeared having been delayed by a buckled back wheel and no spoke key, but plenty of replacement spokes............a lesson learnt?I doubt it.
A fast ride home 1' 20" in perfect conditions for cycling - and long awaited Spring like weather.

PS. Just returned from a short break to Lulworth Cove where the sun barely went in.............stunning weather.
Posted by Tartan Socks(long) at 19:52 No comments: 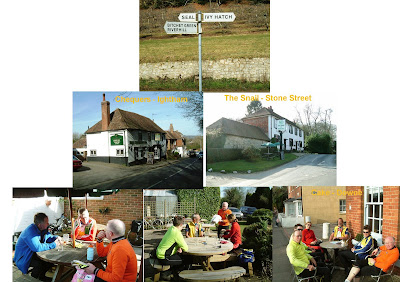 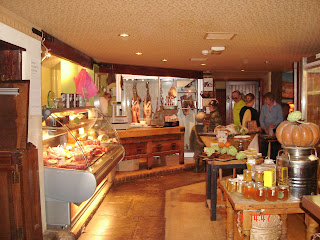 Very windy day. Met Steve Hillier, Ed, Andrew, Paul Day at the start and rode into headwind. Realised Steve was on fixed wheel as we flew down Pebblecombe, but he passed me at the bottom ........no trouble.
Steve went ahead at Leigh and missed left turn. Luckily, he retraced and met Jeff whilst looking for Tesco's!
Pete Foster, Pete Beyer, Andy, Bob, Graham & Terry were there already.
Left turn into headwind up to Charlwood through to end of lane and right, then left down unsurfaced road (lots of potholes) past lovely ponds to Newdigate church. Then right, left to Capel over A24 to A29, left into a terrific headwind then right down sheltered lane to Walliswood then The Parrot at Forest Green.
Very crowded but found a table and were served very quickly. Unusually they had a butchers in the pub! (see pic).
Tail wind in rain all the way back to A29 then retrace to Newdigate, Pixham Lane.
Parted at Burford Bridge, Ed went to W'spoons. Steve, Grant and I looked inside as it was open day to see if hall OK for our club (KPRC) dinner.
It was mindblowing so we voted yes.
Steve said "who would of thought Jake, that 2 years from when we met we would be looking at wedding venues together!"
55 miles.
Posted by Tartan Socks(long) at 20:58 No comments:

For details see: http://www.cyclechat.co.uk/forums/showthread.php?t=28333
Posted by Anonymous at 11:07 No comments:

I was last to 11s beaten by Ed's main road superdirecttisma from Cheam to Wetherspoons Guildford which easily seated our 13. Bribed by a free tea, I led south past Liddell sisters and White Rabbit onto the newly signed NCN 22 route. Taking the first right(A248) after Shalford brought on a senior moment and we returned for an illegal right back onto A281. In which point I realised I'd been correct all along but too late thus we reached the crematorium via Trunley Heath Road. On Farncombe Hill a new pair of legs was high in my thoughts! Pausing by Charterhouse, Ed and I swapped alumni (BP, Paxman, Genesis minus PC). Left through Hurtmore sent us under the A3 and then right towards Shackleford looking at its best in the soft spring sunshine. And so we came to free range pigs and Puttenham where lunch was alfresco at a crowded Good Intent until the disappearing sun sent us scurrying for warmth. As we were leaving, Ed spotted something highly desirable before back we went along NCN 22 (North Downs Way) to Watts. There we headed up the hill to the A3/A31 junction and along the track down to the bridge in Guildord where this story ends with me seeking the Wey north and the pack heading up the High Street for Clandon Park (not Newlands).

At least two cyclosportives, West Surrey Sunday riders and sundry younger/fitter riders were proof (if any were needed) that it had been a fine spring day. Finally you can see the R-word in the background for the next five Sundays (BBC 2 2100-2200)
Posted by Anonymous at 09:11 No comments:

Returning from Puttenham,we came upon Clandon Park Garden Centre coffee shop situated within the grounds of NT Clandon Park.
Sundays - 10-5.
POT - £1.35.
Friendly service - "Would you like your scone warmed?".
Posted by Tartan Socks(long) at 19:27 No comments: