Today, I was duty Runs Leader after Mike had to pull out due to ill health.
I'd already decided Reigate was to be reached by the most direct route which involved the A217 but that was OK because the speed limit is 40mph and the traffic was fairly light anyway.
Morrison's coffee 79p was good value likewise the cakes (39p - scone).
Jake, John & Terry soon made an appearance that swelled our number to 8 only to drop back to 6 for the ride to Newchapel. (Jake, Ann, Steve, Keith, Ed & myself)
As we were leaving, Ray arrived to be directed the two "old codgers"still in the cafe.
The Blacksmith's Head is a fine pub, if a little quiet but Steve let it be known his intention to lead a run back to Newchapel in the summer.
We were away by 1.30pm and with a brief stop to cape up, I was home with a mug of tea, toasted hot cross bun and my feet up watching the Beeb's coverage of the Manchester World Cup. Well done Chris Hoy, Victoria Pendleton and the rest.
Mileage 50.2 (from Ewell).

Sunday 4th March 2007 - Due to an oversight, the ride to Irene's will start from North Cheam. (Not Kingston Bridge)
Posted by Tartan Socks(long) at 16:45 No comments: 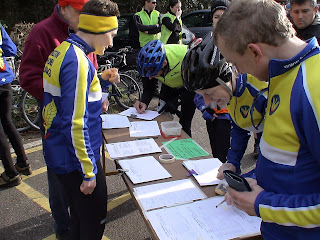 Compared to the Hilly 50, a rather smaller number, 5 to be precise (Graham, Ann, Ed, Keith and Steve) assembled on Kingston Bridge. There we were entertained by Keith's twice attempted puncture repair before setting off through Bushey Park emerging at its NW corner in Hampton Hill. The railway bridge at the end of Prior Road was closed requiring a retreat to the level crossing by Hampton station. We dropped down to Lower Sunbury Road and from there to the Orangery. There to greet us were Andy, Bob and Irene and after a while Richard put in an appearance. Past film studios and Laleham, we sped joining the tow path to Staines. Delayed at both level crossings in Egham, Tite Hill was tackled before entering Windsor Great Park at Bishopsgate. With time in hand, a left turn after the village meant the behorsed ER2 and an exit at Cheapside. One more climb ended with a left turn into Lovel Lane and another to Woodside and the busy Duke of Edinburgh where Pete and Liza joined us. After lunch we explored a not too muddy Hodge Lane before sampling Ascot racecourse and passing through Cheapside. Here we turned right and reentered the park at Blacknest. We skirted south of Smith's Lawn before mingling with the crowds near Savill Gardens. Englefield Green and Virginia Water pointed us beside M3, M25 and Great Cockcrow railway to tea at Tesco's Addlestone and a parting of the ways. Around 50 miles on a dry mild and cloudy day.
Posted by Anonymous at 13:38 No comments: 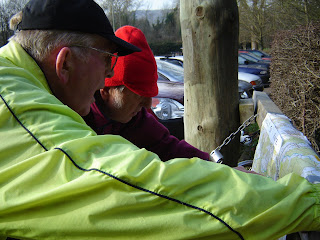 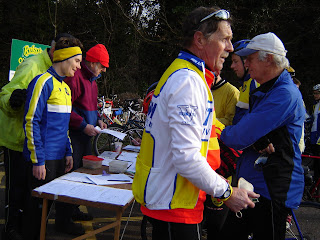 At the start- Rykers thereon for Boxhill
Posted by Ray Dare at 17:26 No comments:

Believe it or not! from Pete Clarke 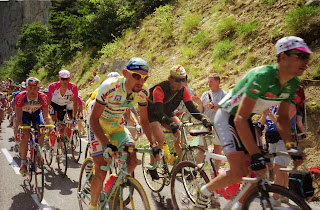 This year we'll be joined by Brian S and Mike M on Saturday/Sunday. So I've outline plans for rides. Both are 50-60 miles so start around 0930 hours.

The Saturday ride would be to Shaftesbury via the Ebble valley; back via Tisbury and Dinton.
Energetic types could go via Sixpenny Handley and Zig-Zag and met us for lunch.

The Sunday ride would be to Imber - a village empty since 1943 and only open a few days each year. Probably up the Avon valley, through the army camps onto Salisbury Plain and back down the Wylye valley.

I'll be searching the web for teastops but I'm not optimistic! Just checking the new Blog service works.
Posted by Anonymous at 18:29 No comments: