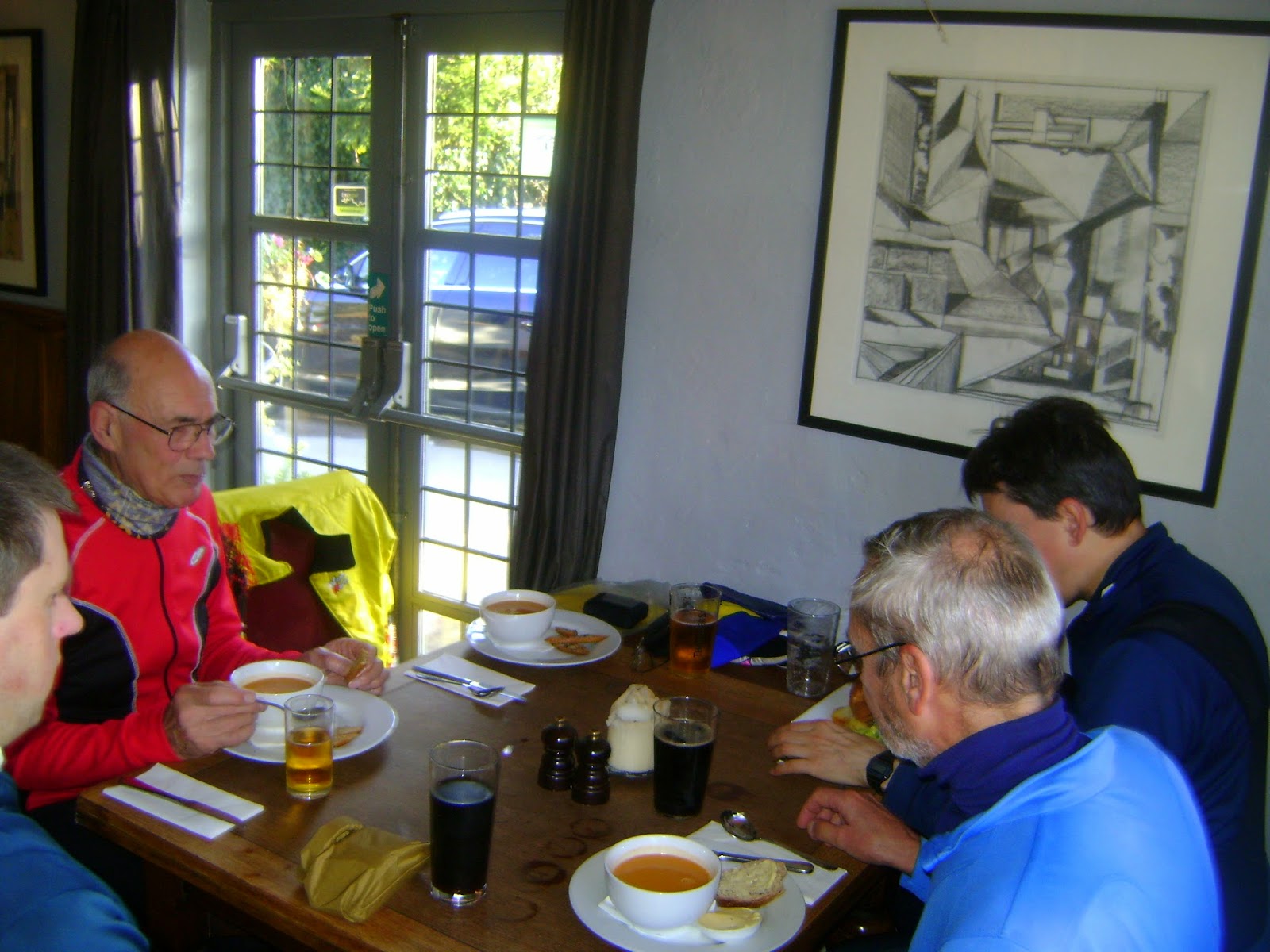 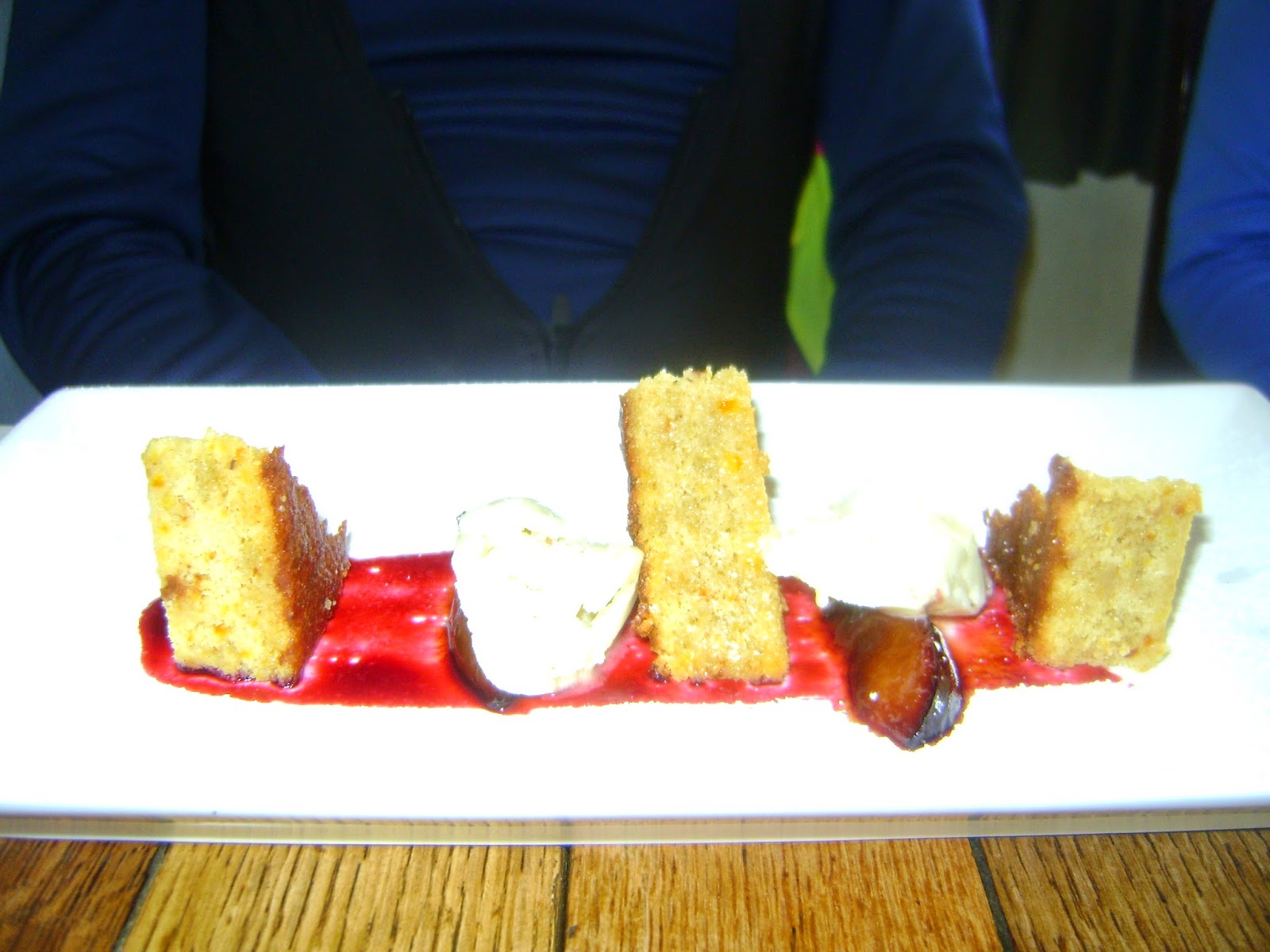 The last ride of 2014 was a repeat of last year.
From Sainsbury's Cobham I led five south to Bookham Common where I appeared to take the wrong turning and ended up in Fetcham.An extra mile or so is of little consequence this time of year.For those familiar with Critten Lane and a blogpost from 15th December last year...........the road is now as smooth as a pancake with not so much as a indentation to spoil the surface.
A table for 10 was ready and waiting at the Abinger Hatch but we were now down to 4 diners.
Most had a "bland" (Keith's view) soup at £5.50.Daniel had his usual followed by Spiced Orange Cake with Port Roasted Plums & Mulled Apple Sorbet £6.50.


It's not mentioned in the newsletter but as usual food and drink will be available at Ed's after the ride.
Posted by RaasayWarden at 16:05 No comments:

I took the shortest most direct route to 11's at Notcutts garden centre as it meant cycling into a headwind. Numbers swelled by 11 and and 12 set off towards Chertsey although there at least 18 for 11's. Across Chertsey Meads and then bypassing Adlestone and on through Ottershaw. Heading towards Virginia Water, at the roundabout at the top of Wellington avenue I stopped to re-group but Vic thinking of his youth headed on up Callow hill but was retrieved by the by the unofficial back marker, thank you Graham, and we headed into Windsor Great park by the Wheatsheaf pub.

We cycled round the lake towards Blacknest Gate, in hindsight, not a good idea as a considerable number of people and shunned Christmas shopping to walk their dogs on said path. Turning right at Blacknest Gate and on the road towards Bishopsgate and at last with a tailwind! We reached the Barley Mow at Englefield Green and a reserved table awaited us. Pam and Jeff spent some time deciding which of the abundant selection of fine ales to wash down lunch with! Roger found his to be moorish and went back for another pint!

Most of the food was served quickly but alas Irene and Graham’s vitals took longer to materialise. Leaving Englefield Green we took the decent down Prune hill and headed the shortest route back to Hampton Court. Terry left us midway to head home. With the wind behind us Five on the Bridge at Hampton court was reached in good time. Chatting over pots of tea we were joined by Ray and also by Liz and her daughter Tammy. Farewells said we all headed to wend our way home through the Christmas traffic. Thank you all for you company and to the shy photographer. Merry Christmas and safe cycling in the new year. 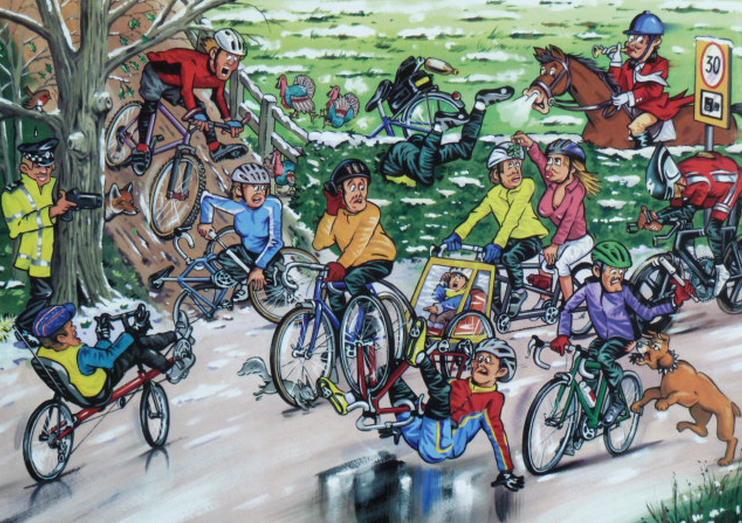 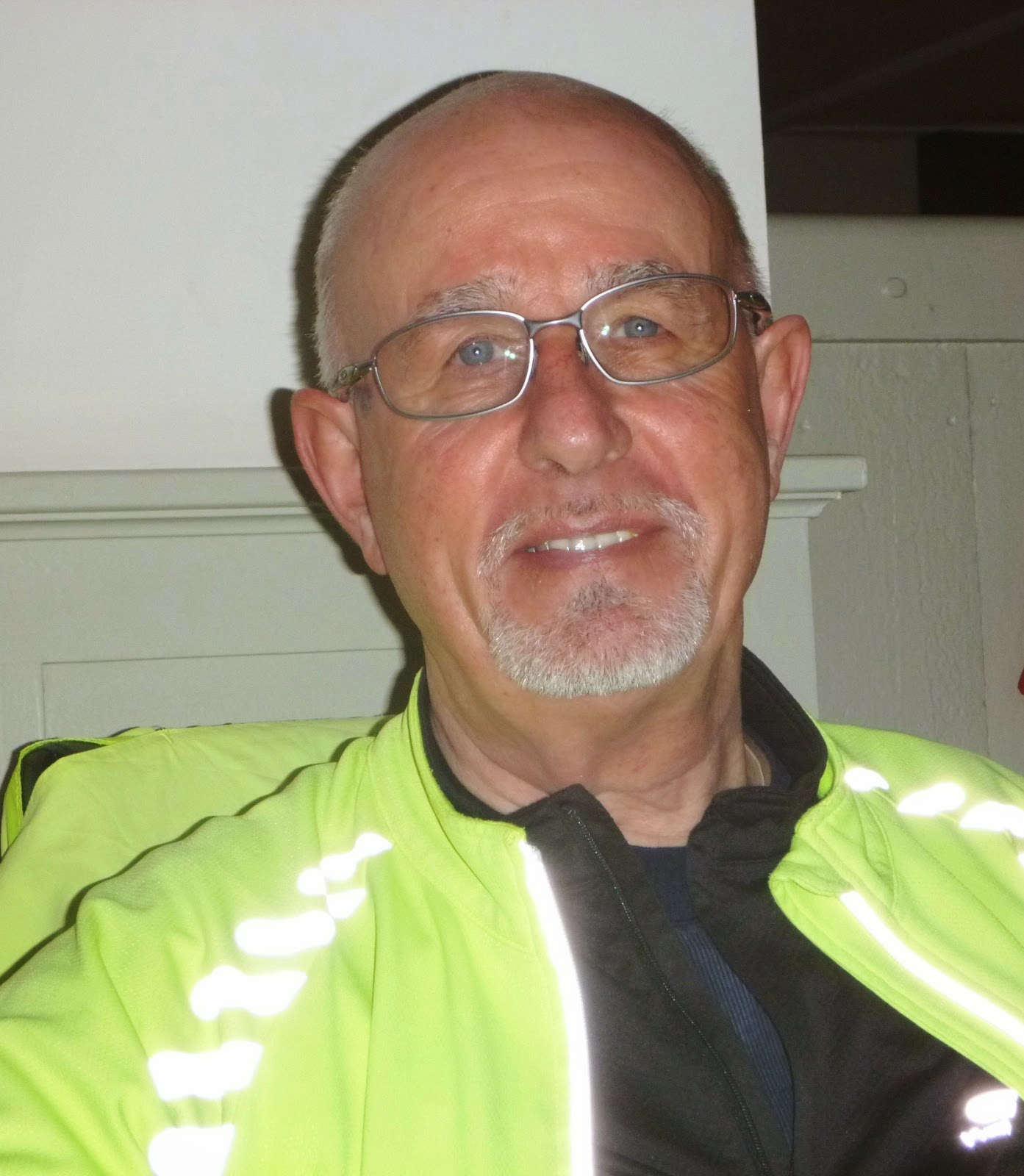 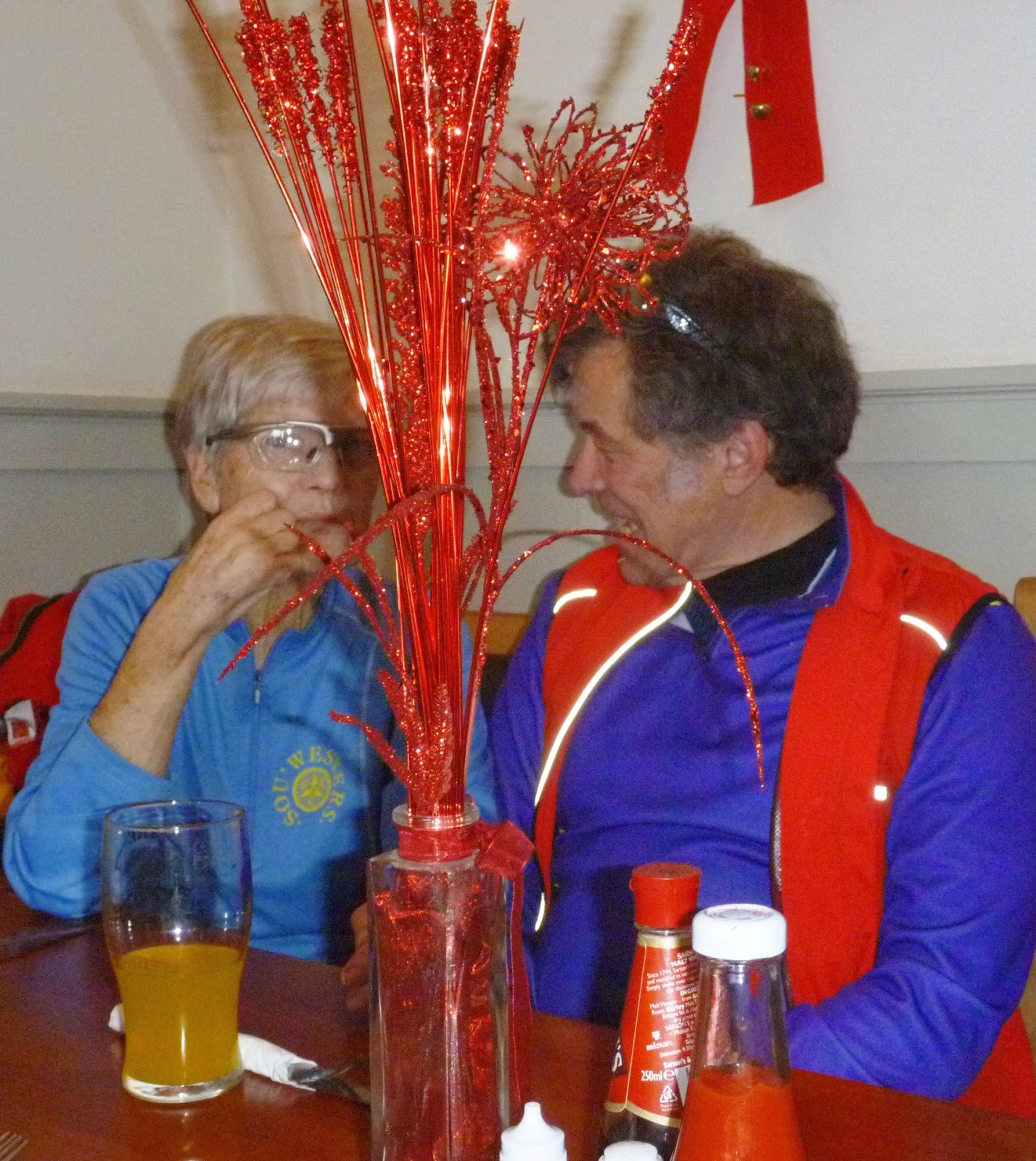 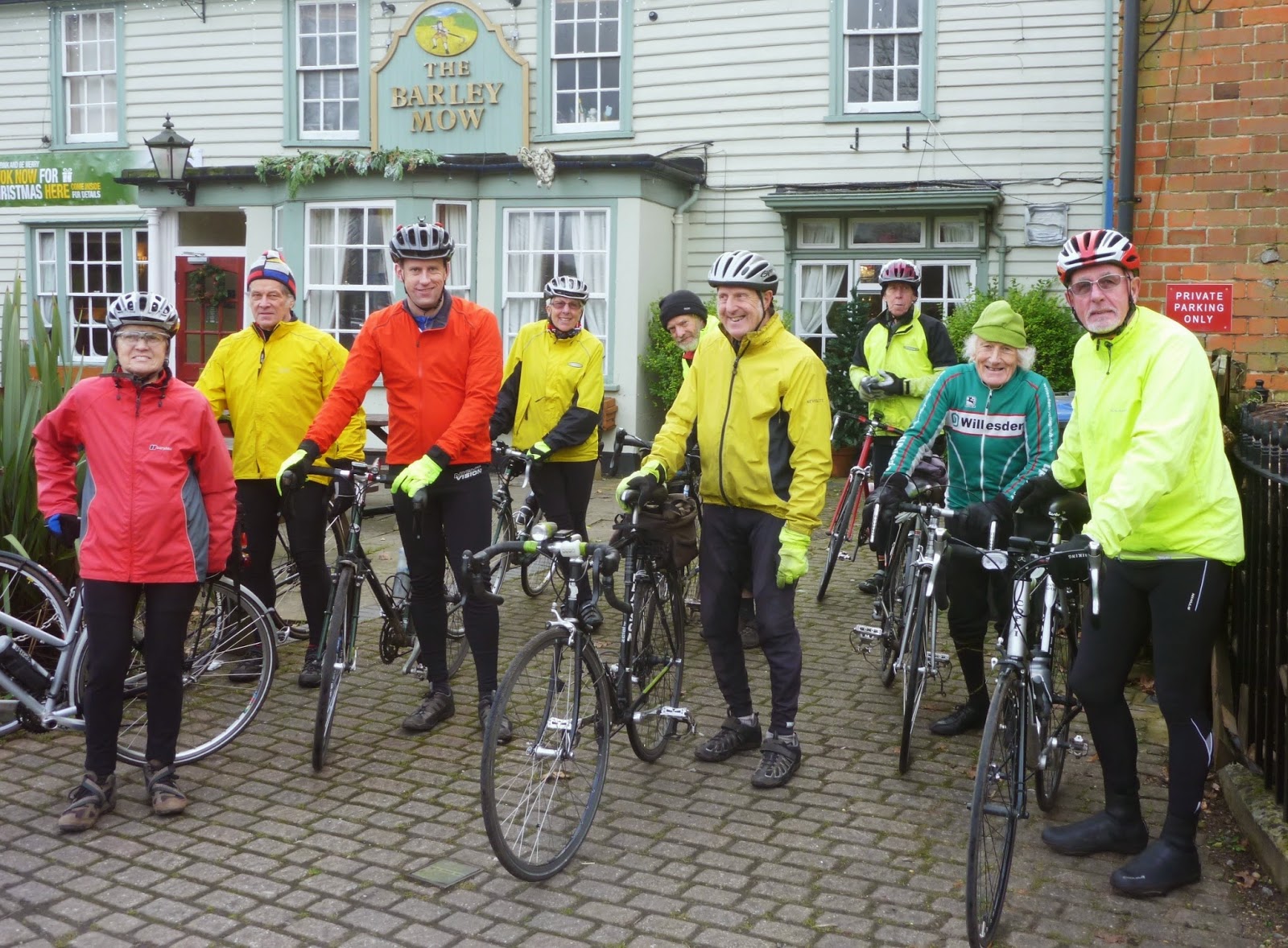 
What a beautiful day for cycling - even if we had to pay for it with a bitterly cold start!


Six, plus myself, left Squires at Stoke D'abernon approximately 11.15.   Tony very kindly stayed alongside me to give me a nudge when it was time to turn into River Lane which now has a superior surface  (long time since I was last there)!  A right at Downside Common led us  to Horsley Road where we turned left in order to make a loop to Ripley via The Drift, East Lane, The Street and then down hill to the end of Ripley Lane.  Across the Portsmouth Road to pass Pyrford Abbey and on to Maybury.    We used the towpath into Woking, avoiding the Six crossroads roundabout which was incredibly busy a couple of weeks ago!


Tony punctured just before turning into Horsell Rise, hence Vic, Graham, Ed and Irene continued to the pub, The Plough, and Terry, Tony and I followed on.


Landlady Vicki and staff looked after us well.   Before Terry had sat down, his  pint fell down between the tables that had been pushed together.. whoops...but soon sorted - and then Ray Wren arrived to join us for lunch.


The afternoon tea venue was changed to Addlestone... sort of via Fairoakes Aerodrome!    We had to say goodbye to Terry upon leaving  the pub for he needed to make his way home via W. Byfleet etc.     For us it was almost a direct ride, planned so that riders could get home in good time - but, surprise, surprise - all seven of us had tea at the Golden Cafe in Addlestone before heading for home in various directions!   We left the pub just after 2pm and was at the cafe 2.40 where we were made welcome as the cafe did not shut till 3 o'clock.


Thanks all, a  very enjoyable day

I wonder how long before The Castle crumbles

18 rode to the 11s. venue for light refreshment, 11 continued to Chobham via Laleham, Staines, Egham and on to Windsor Park where we exited at Blacknest Gate taking the back lanes to the A30 at Sunningdale. We then continued along Chobham Road, Windsor Road to our destination, The Castle Grove pub, where the food was soon delivered.   We then continued to Horsell  and Woking where we continued along the Basingstoke Canal to West Byfleet.
Thank you everyone for a lovely day. We were very lucky with the weather.
Irene.
Posted by Jeff at 18:30 No comments: