It went very smoothly with only two punctures, both at the "lunch" stop in Faygate. If you've nothing better to do, see if you can recognise anyone (min: 4) on

Posted by Anonymous at 20:02 No comments: 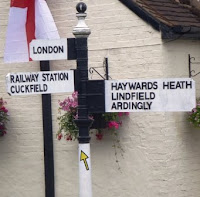 At the Half Moon Inn and Tanhurst Farm 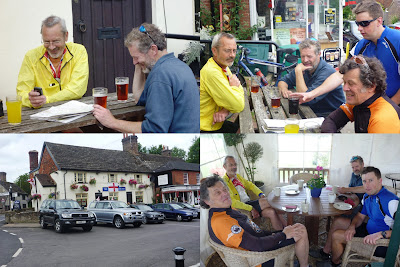 Question: What is the correct name for the Farm? The OS map says Tanhurst Farm; Google map says Tanhouse Farm; the livery on the farm van says Tanfield. A prize of a presta valve cap awaits the provider of the first correct solution - if there is one!
Posted by Jeff at 12:35 No comments:

I didnt take a camera (Jeff nudge nudge) so a recent snap - waiting for the Baltasound bus.

I set off on a dullish northerly day forearmed with map and outline idea in case we were leaderless. Five took last week's route though we diverged by bearing left into Betchworth. After Leigh and Irons Bottom it was up and over to Hookwood where numbers doubled and then halved as some were homeward bound. The rump took in Horley and Copthorne and climbed to Turner's Hill where winter's potholes have gone. A mess of cars at the church was evidence of nearby L2B but we veered right and after a while plunged down left before Worth Abbey. My hastily considered route had been right at the first crossroads but Jeff suggested that Ardingley reservoir was just what the doctor ordered. So breathless we arrived at the Half Moon - spit and sawdust but with prices to match. The way back lie through Handcross, Pease Pottage and Colgate. From Faygate we began to overhaul flagging L2B'ers returning from the sea. One final act for the day was a long drawn out cake session at Tanhouse Farm before dispersal below Box Hill - around 70 miles door to door.
Posted by Anonymous at 09:15 1 comment: 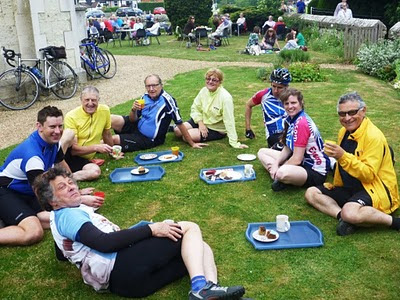 After the last alarmist(?) blog I was delighted to see familiar faces at the start. Via Headley and Brockham we went over the top which had more than a dusting of charity and sportive riders. At Beare Green the warmth and smell of cooking oil drove us outdoor where ten was our number eventually; Ed having nobly stayed behind with puncture victim Frank. Without Bob we headed for Weare Street and Rudgwick where vociferous roadies were adamant - "no roughstuff" so we continued past the Blue Ship roadend to the A29 and then back north to the Red Lion at Slinfold.

Apologies are due to John M and Don; the trivial (a dropped chain) must have been more serious. Briefly they appeared at lunch but presumably didnt spot us in the gardens. The way back via Warnham, landfill and Rusper developed into a gallop on the long downhill to Parkgate and quickly it was gateaux sur l'herbe at Brockham Church. It had been a fine day for cycling - spots of rain as I left the house and patchy cloud but a lot warmer after a month away.

PS Owners of the July/August newsletter may have noted a lack of rides leaders; Ed, Irene and I are OK to lead the July rides. Any offers for August 1st (Plaxtol), 8th (Hascombe) and 29th (Turners Hill)? Contact Andy or myself.
Posted by Anonymous at 08:59 No comments:

The Horsham Ovary and Nuthurst 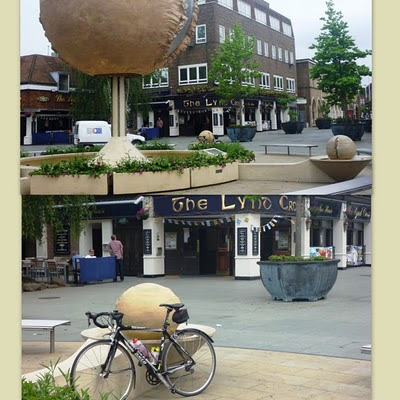 I'm beginning to think that it is me, not them! Today's venue for 11's was Horsham Spoons. I took that to mean Wetherspoons and headed for the Horsham Ovary - not quite as easy to find as you might think. But there I was at 11.01 am and not a soul in sight. I'm either at the wrong place or they have gone already. Has everybody been sucked into the giant ovary? For a while I gazed at this anatomical anomaly, with its fallopian tube and breaking waters, but no sign was given. 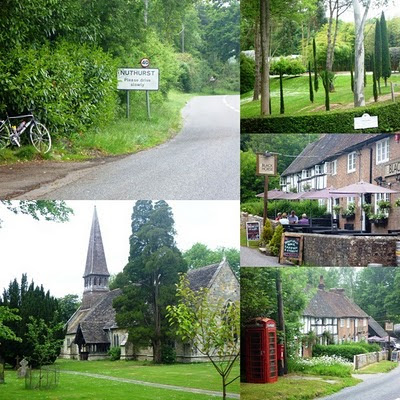 Nothing for it but a gentle solo spin to nearby Nuthurst and the 'No sandwiches on Sunday' Black Horse. I was lucky enough to be able to get an over-the-'phone mortgage to pay for a half pint of shandy and sat outside, enjoying the stream and birdsong, intending to make it last until the possible arrival of a gang of C&Mers. Shortly before 1pm however, the pastoral peace was rudely broken by the outburst of an in-house jazz group. It certainly had the effect of moving me on. I toyed with the idea of retracing my path to Maplehurst and the White Horse Inn, which does sell sandwiches on Sunday, but decided instead to hightail it back home.

I wonder where they went!

P.S. All is revealed! The group hadn't yet arrived! Bob had arrived early, been to church, was in the Lynd X but his bike was elsewhere. Next time I'll look inside! Doh!
Posted by Jeff at 00:18 No comments: 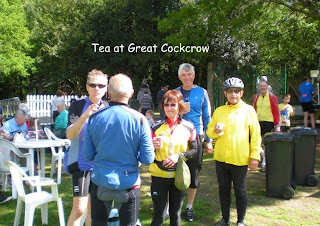 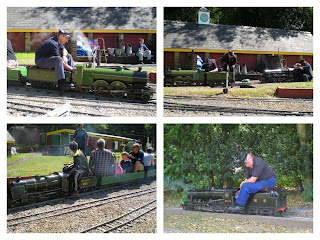 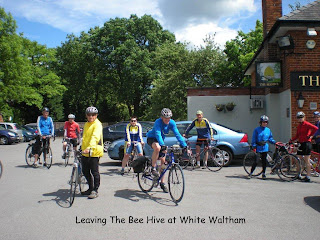 Pictures from Pam
We had a great ride to Great Cockcrow where a splendid tea was taken! Lots of engines in steam and the men among us were in our element. No problems getting in and tea, coffee and home made cakes were available at reasonable prices! We will be calling again, I am sure! From David Ward
Posted by Pete at 12:31 1 comment: