Living in West London does mean that some C&M rides are way to far just to get to 11's and then lunch even further South. As this weeks ride was one such ride I opted for an excursion along with Pam and Terry on a route reccy ride. I met Pam at Chertsey Meades and then onto Guilford to meet Terry for 11's at Weatherspoons.

We left 11's and meandered our way (with a few detours) to Witley and lunch at the White Hart where we dined in the garden in splendid sunshine, it was hard to leave and get back on the bikes but we did.

More meandering on a very circular route and we reached Farncoombe boat house for afternoon tea and cake by the water, again in glorious sunshine. It was idyllic and I half expected to see Mr Toad, Ratey and Mole join us for tea.

Back to realisation and time for the cycle home. Terry left us for Dorking just before Guildford and Pam and I parted company at Chertsey. Although an unofficial C&M ride it was a lovely day's cycling. I am glad I missed the long C&M ride for the shorter version, I managed just over 90 miles door to door.
Posted by Tony at 17:02 No comments: 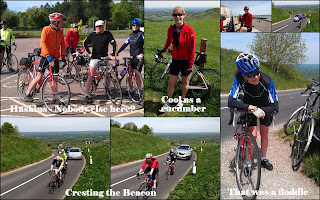 Pics courtesy of Janice and Jeff


Here is a link to Janice's sat-nav stats for the ride:

A day of ups and downs...........and in more ways than one.
A beautiful morning,just a slight northerly breeze but with sunny skies.
A little after 8am seven of us made good progress to arrive at Haskins,Copthorne at 9.35am to find Jeff sunbathing.
It is with regret that I hadn't considered the timings and our likely arrival before the place had even opened.
I understand that seven members were essentially mislead and met at a later time but missed the ride because of this..........sorry.

With a tailwind,our first stop was a new cafe in Lindfield at around 11am.I say cafe but in this locality it means tearooms and with bone china & a pricey menu list.
Back on the B road which we've followed south from Copthorne.
Up and over Ditchling Beacon........phew.A slight detour to join the B2123 to Rottingdean.
We were soon riding along the undercliff cyclepath to a busy cafe at Ovingdean arriving 1pm.
With my pre-prepared sandwiches still in my fridge.....doh! it was a round of tuna on brown for me (£3).
Paul & Ken Day had to leave us but we continued to relax until 2.10pm.

For some,the two substantial climbs away from Brighton to rejoin the Ditchling road were completely energy sapping so by the time we arrived at Lindfield thoughts were turning to rest,eating,drinking and alternatives as it was 4.30pm by now.

At this point the two fittest riders (Janice and Keith) bid farewell to continue the ride whilst Jeff,Helene and myself focused on the rather attractive train assisted prospect from Haywards Heath.
Ed had already been attracted to Brighton Station earlier.

It was decided early on the cheapest ticket would be a groupsave (pay for two,three can travel for the same price) £25.50 single to Epsom.
Confusion ensued at the ticket office at where we had to change (engineering works on the West Croydon line meant travelling to either East Croydon and changing to a train to Balham or staying on the train (forbidden - ticket says not via Clapham Junc) to Clapham.
We joined a First Capital train.
In a while,it dawned on me that conditions of the groupsave ticket is that all MUST travel together for the whole duration of the journey (to Epsom).
But Jeff was leaving the train at East Croydon................surely he's gonna get a penalty fine???

At the announcement "We are approaching London Bridge,please make sure you take all your belongings" Helene and myself looked at each other................LONDON BRIDGE?????

The clue was First Capital............they don't stop at Clapham.But it didn't dawn on either of us until it was too late.

We decided to take a train to Waterloo East to join the Waterloo-Epsom mainline.
Aware that we were travelling on an invalid ticket as Jeff had left us,we were cautious at the ticket barrier in Waterloo (the guy did walk off with my ticket to ask his senior to "check").
"I don't have a problem mate.............but you may get stopped on the train and subject to a penalty fine". 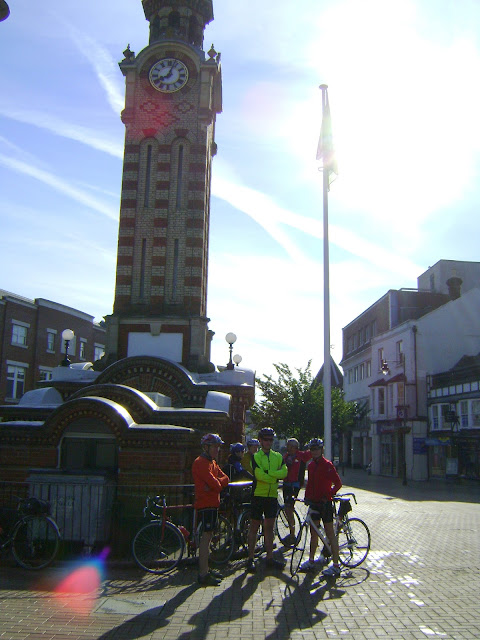 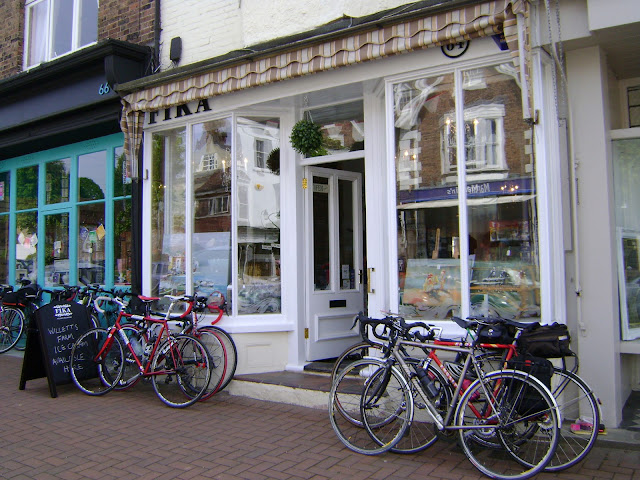 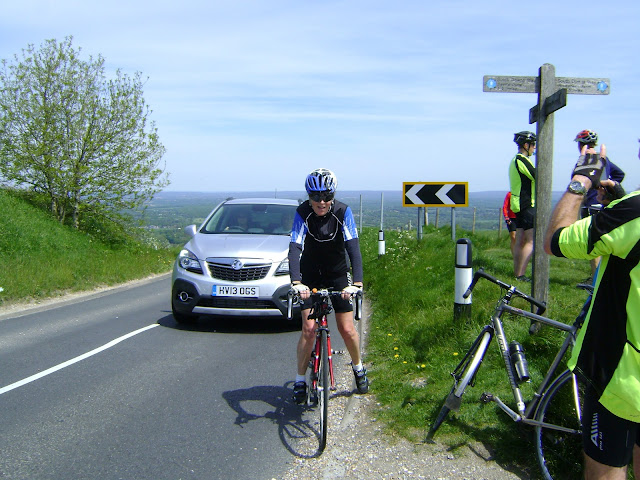 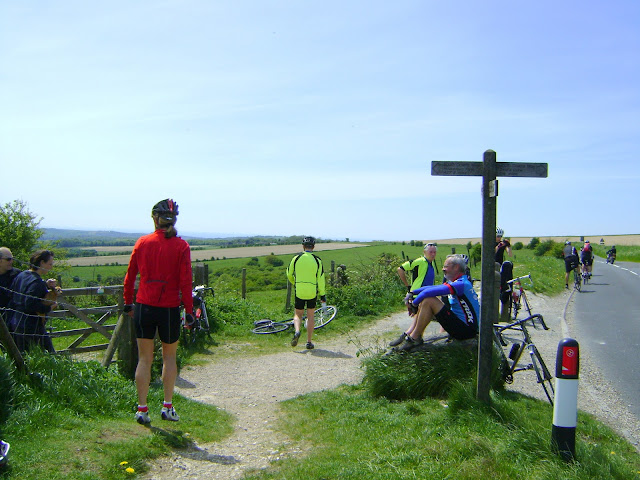 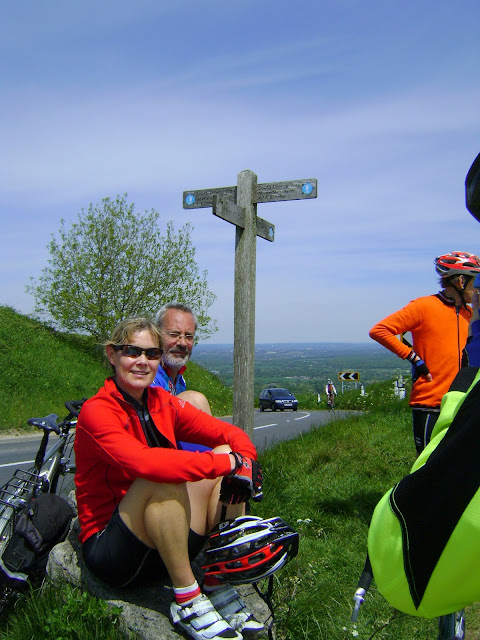 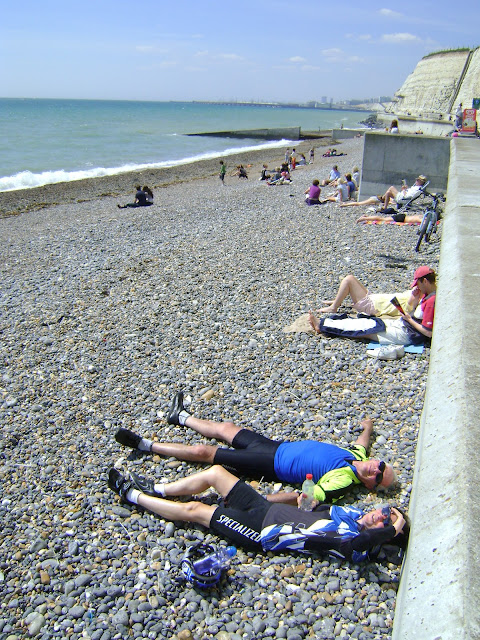 Posted by Tartan Socks(long) at 10:26 No comments:


Kingston Bridge was the magnet that attracted a lucky thirteen for Dave’s jaunt into Bucks. The jabbering forecasters lied and the rain stayed away. Within minutes of our start, we were halted in our tracks by a duck, unconcernedly escorting her brood of ducklings across Hampton Court Road into Bushy Park. Our first planned stop was to admire and test the palatial ‘conveniences’ undreamt of by Henry VIII. Unburdened, we then sped off via Laleham and Staines for an unhurried refreshment stop at the Windsor Farm Shop. Then it was Windsor, Boveney, Bray and Datchet to skirt South of Maidenhead to our lunchtime target of Littlewick Green.

At our chosen pub, the Cricketers, we were promptly subjected to some Aussie style sledging by an anxious landlady, who feared that our bikes would brutally bruise the petals of her mini-barrelled rhododendrons. Male backup soon appeared, though bikes remained chained in situ and petals blessedly unbruised. John Beer arrived for a lunch time reunion with Carolyn. Food and drink seemed to satisfy all who partook. On remounting we were soon crossing open fields on tranquil Bottle Lane, to which by unlikely coincidence Tony had introduced the Wayfarers the previous Wednesday, in the opposite direction on the way to Hurley. Then it was White Waltham to Ascot to our terminus with tea and cake at Great Cockrow miniature railway near Chertsey. Here we absorbed the last few rays of sunshine, before plotting our own ways home. Many thanks to Dave for leading a most enjoyable ride. Distance run for me was 78 miles.


What better place to be at 9.15am on a bright Sunday morning in early May than sitting on a bench outside Wetherspoons in Leatherhead, anticipating a cycle ride into the unknown?  So also believed a quintet of cyclists (Janice, Lilian, Dave S, Ray and Vic), ready for whatever the leader might throw at them. While Jeff favoured the diretissima approach, Janice preferred a maximum mileage to elevenses. Ever attentive to a lady’s expectations, Jeff therefore improvised a loopy route via Ray’s home at Fetcham, Effingham Junction, Ockham and E. Clandon, before a stretch of our beloved A246 to the GC at W. Clandon.

Dave W and Don were already half way through their breakfast, before we were joined by the ever- ebullient Pam and the  ever-reliable Terry. Jake and her KPRC clubmates put in an appearance, before disappearing to continue their exertions.

The more leisurely C&M contingent twiddled off (sadly abandoned by Ray), for the climb to Newlands Corner. Here, the group were thunderstruck when the leader swerved off the tarmac through the car park and on to the rocky, muddy, root-infested Drove ‘Road’, the only way to reach Guildford Lane. Somehow we lost Dave and Vic. Dave was waiting for us as we emerged from the woods. A pretty downhill took us along Halfpenny Lane to Blacksmith Lane, where somehow we met Vic cycling towards us. He can explain how far better than I can.  A stretch of A248 took us to Christmas Hill, where Janice’s rapacious hunger for miles incited a longer loop than planned to Bramley. 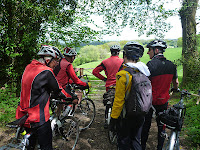 Crossing the Horsham Road we glided blissfully (well, Vic and I did) along Snowdenham  Lane and Thorncombe St., before we branched off west up Allden’s Hill, to pause near the top to enjoy the glorious views of so far unravaged Surrey countryside. Rough and ready Heath Lane took us past Lutyens Land, before a descent to the more functional shape of the Wetherspoons known as Jack Phillips, for lunch at Godalming.

Out return was a familiar and humdrum route via the A3100, Meadrow, haunted by CTC ghosts of Cotterell House, to the cobblestones of Guildford High Street and the A245, for a relaxing tea-time at the vineries in Effingham, whence I made an early departure. The weather smiled on us and I hope that one and all got home before the rain and enjoyed a pleasant ride.

For those with a sweet tooth, the ladies of Capel will be tempting the dissolute to destruction with their irresistible display of cakes for every taste, on the dates set out in their programme for 2013. You can print off the programme from Google Drive should you wish. Fortunately I am impervious to such temptation.

The Old and the New 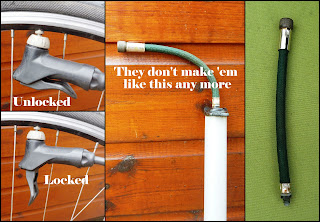 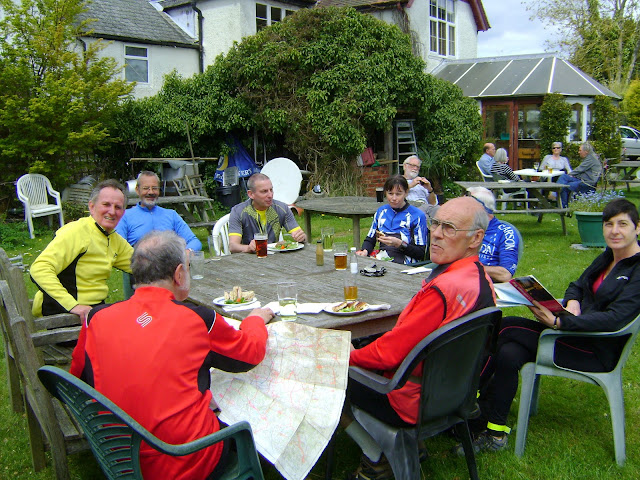 It's been a while but today I was in good spirits for a jaunt down to the Sussex borders.
It was a delight to pick up a new member Lilian (far right in pic) in Leatherhead but I was soon "£$%^&*()! due to a puncture just after Givons Grove.
So we were the late arrivals at Rusper Golf Club........aww gawd we were here last week!!!....................yep I didn't realise (doh).
Just a tad warm in the greenhouse that's their conservatory so I was keen to get going to lunch.
The route to Maplehurst is a real pleasure,particulary the St Leonards Forest  and the lanes to the west of Lower Beeding.
A real hamlet with a crossroads where we find the White Horse.
All dined alfresco with the food arriving briskly.
The brief sunny intervals allowed my head to turn a reddish colour ............nice........ouch!
I took a decision (with all in agreement) to take the bridleway in Nuthurst that goes uphill to Sedgewick Park.
The recent "resurfacing" meant the majority rode this handy short cut to avoid Copsale.
On the outskirts of Horsham,another puncture for me so Jeff took the helm whilst I struggled to inflate the borrowed tube...........thanks Ed.
A resident noticed me and produced a Park Tools track pump no less :-).......but I was about to make things worse.I was clueless to know how the valve connector should be when it's in a "locked" position.
In the process I managed to wreck Ed's tube so I was forced to mend the previous puncture.
But with nearly 90 psi in the mended rear tyre I flew along to join the others at Capel.
A piece of the lemon drizzle in the system and we went our mostly separate ways.

Posted by Tartan Socks(long) at 20:07 No comments: