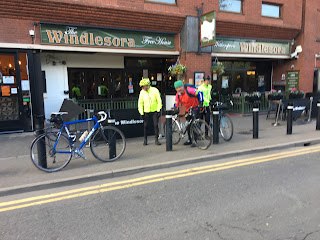 Yet another wet start for one of my Sunday rides (unbelievably in such a dry period, three out of four I have led since July have had rain), but this not deter eight of us from reaching elevenses at the Bourne Valley Garden Centre.   We lingered over coffee until almost 11.30, by when the rain had stopped and it was starting to brighten up.   Three went home but Simon, Graham, Tony, Vic and I continued to The Windlesora by a fairly direct, if not entirely flat route.  Thanks to Simon for spotting the offer of a burger and chips for £2.99 which made an excellent lunch choice! The return route started in sunshine and we had the wind behind us (nothing to do with the burgers, I hasten to add), so made good progress to tea at Laleham where there was the usual dispersal.  After the unpleasant start, this became ride which I think all enjoyed so many thanks for your company.

Those riding this coming Sunday remember to put you clocks back and don't get to11's an hour early. 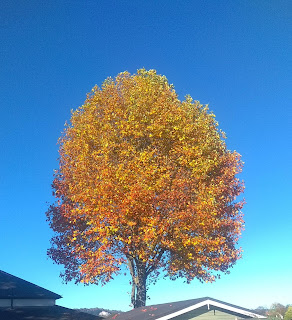 Can it really be nearly bonfire night?   The trees think so but nobody's told the weather.   It was another day when whatever you wore in the morning was too little, but by lunchtime it was too much.  17 degrees, dry, nearly windless, and not a cloud in the sky.  Wonderful.
Read more »
Posted by Simon L at 19:17 1 comment:

QUIZ: How are your group riding skills?

Just for fun - we are pleased to announce an ANONYMOUS quiz about how you ride in groups. You get to give a score for yourself, and also for the others in your group, We don't ask for any names and don't store any info about you personally. We will attempt to summarise the results in a future Sou'Wester. It should take about ten minutes to answer the questions, and another two hours to discuss the results with your friends, should you choose.


If you'd like to do the quiz, click here. Please don't enter any names in the comments either!
Posted by Simon L at 12:58 No comments:

Sunday the 14th of October

Heavy rain forecast mostly for the whole day. I left  home for 11's at Garsons farm at 8.50 and returned 10 minutes later to put on heavier rain gear as it got really heavy. Half an hour later I had stopped to take my rain gear off! 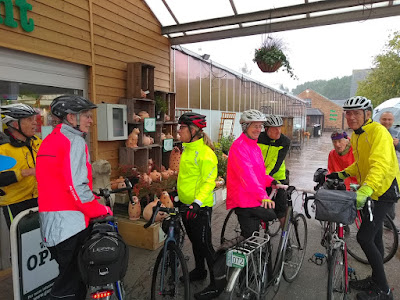 A few were already waiting outside at Garsons farm when I arrived, they don't open until 10.30. Once settled in the cafe numbers increased. The birthday girl was one of the first to arrive. 11.00am came and went and it was around 11.15 before we were outside ready to leave, But the rain had gotten heavier and we all sheltered under cover. Eventually the rain eased off to an acceptable level to ride.

It had already been decided to forego the 80k ride and head directly to Wetherspoons Woking for lunch, after a few variations on the route we arrived to find Dave W already tucking into his dinner. 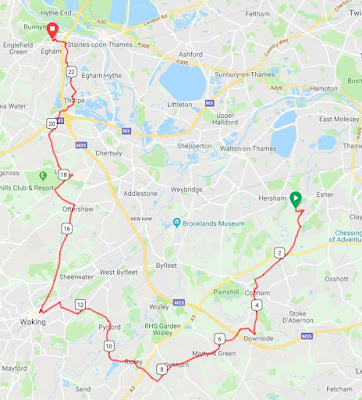 The rain continued after dinner but at only a drizzle. Again a direct route was taken to tea at Pam's house where a lovely spread had been laid on by her niece Anita. After much tea, coffee and bubbly had been consumed the birthday cake appeared, which was a coffee and walnut cake, delicious! 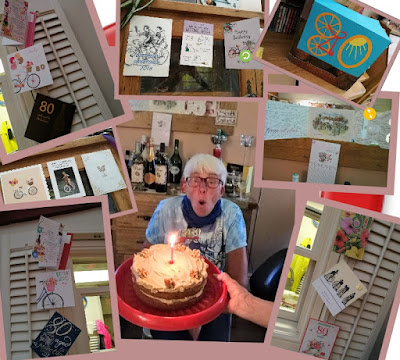 Most of us headed for Egham station as the drizzle continued. A really nice day even with all the rain and a really good turnout despite the weather, but who wouldn't have for Pam's 80th.

Lunch will be at Wetherspoons Woking 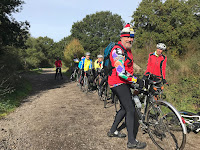 A hint of autumn chill soon became a perfect day for cycling. Along the way I crossed at least two (my guess) sportifs including the Palace (Buckingham) to Palace (Windsor) where £300+ takes one on a 70-mile diversion away from the most direct route.

I was first at a crowded Pinnocks which became even more crowded so we dined alfresco under a now warming sun.  A surprise was MTB-mounted Janice showing no signs of her close encounter with the tarmac.

Much of the route was improvised but fortunately the silent minority (if any) stayed silent. Ockham was followed by the Muddy Duck and Effingham. Here we paused so I could point out to Pam the bridle path to Bookham Common; this prompted interest in a detailed investigation. It was not without incident though few saw my very close encounter with a black pooch! 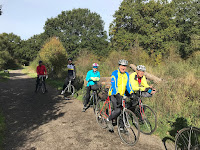 We rode past the Isle of Wight (sic! photos from Janice) to Fetcham. I crammed in two more off-road sections (River Lane and Ashtead Common) reaching the Cricketers at 1245. When I looked there was no website menu. But I need not have worried - child's portions with dessert for £4.99; orange squash 40p a pint!

All that remained were the two miles to Ed's where Jeff was sitting on the doorstep. 40 miles door to door and a light covering of  dust which won't see me cleaning the bike anytime soon!


Posted by RaasayWarden at 09:21 No comments: