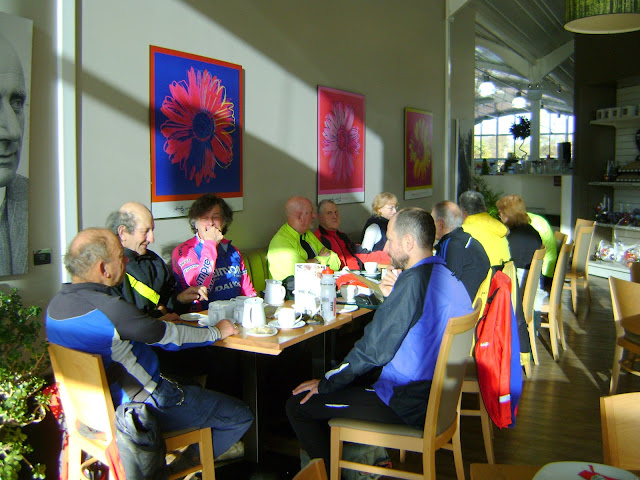 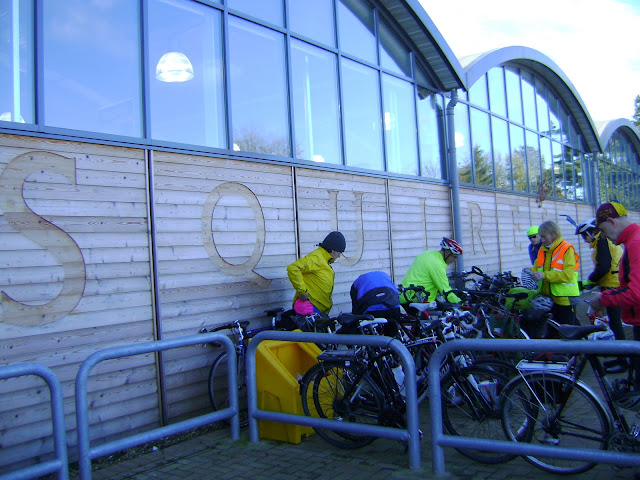 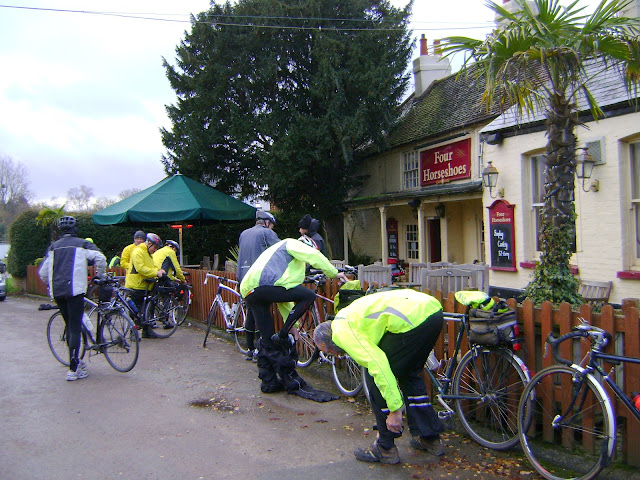 Posted by Tartan Socks(long) at 18:04 No comments:

The previous day's weather had me expecting the worst but it was far less watery though gustier. A half dozen including two newbies, Andy and Paula, set out from Kingston on a roundabout flight taking in Bushy Park, General William Roy's cannon in Roy Close, the A316 spiral, and Sunbury Cross before touching down at 11s in Upper Halliford just after ten.

Refreshed double that original number headed off on another extended leg (Sheep Walk, St Anne's Hill, Lyne and Trumps Green). We were well stretched out by Longcross so I shouted to the posse "Left then Right" intending "take the first exit from this roundabout then first right" and then stopped until the back markers appeared. Unfortunately my instruction had been taken too literally and several went straight on towards Windlesham! Some soon reversed but we were a few short as we descended Staple Hill to the Horseshoes in Burrowhill for lunch. The wayward four turned up about five minutes later.

On leaving we were greeted by a heavy but brief burst of rain so the quickest route (Red Lion Road and Holloway Hill) it was to Addlestone's Golden Cafe for an undeserved tea and cakes. Home after only 43 miles and by 1545.

Posted by Anonymous at 08:05 No comments: 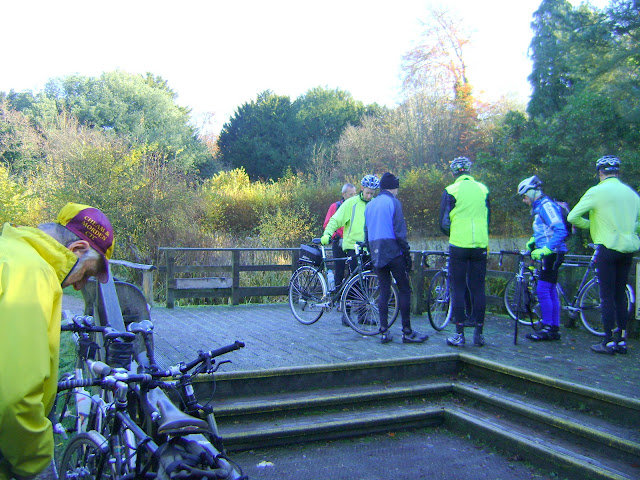 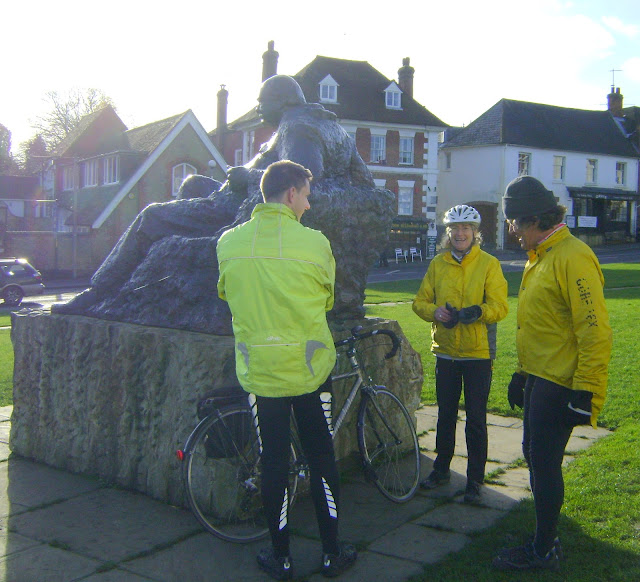 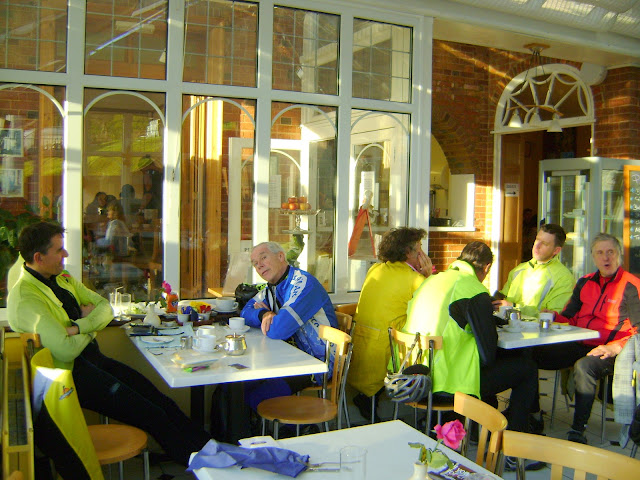 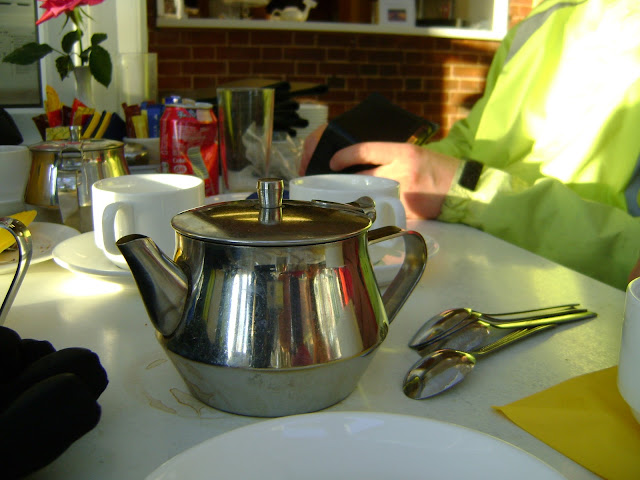 I would stick up for Kent in any conversation about the most attractive areas to ride a bike locally.
Today of all days with the low sun creating beautiful light and quite delightful lanes predictably some going up but with the wonderful freewheel down........it's a joy to be on a bike.

The 9.15am start on paper became the 9.17am start in reality as we rode sun in our eyes toward the tower blocks of Croydon then
Shirley,West Wickham and the silence of Jackass Lane,Keston.........just a few birds twittering.
High Elms Visitor Centre was busy and Bob had secured a table where all 11 of us could sit around.

After 40 mins or so,most were keen to get going so we climbed up to Downe where the natural choice of road was a 1 in 4 ascent to Cudham.
A late change of route took us to Knockholt via Shelleys Lane and the descent of the North Downs at Sundridge Hill.
Then it was easy peasy along the Pilgrims Way to lunch at Westerham.
Jeff,Geoff and Daniel headed for the "General Wolfe" whilst Graham,Ed,Paul Steff and myself found some empty seats adjacent to Winston Churchill's statue.

Later we spent some time helping Steff and her wind up cycle lights............a purchase from the normally excellent Lidl but she may of dropped a clanger with these.
After the drag of Westerham Hill it was downhill all the way to the Dene cafe at Knights Garden Centre,Woldingham.

The nameless had drunk the pots for two dry.


Thanks to the riders who joined me today on the less popular jaunt eastwards.


Seasons Restaurant at Upper Halliford opens at 1000 (according to the Garden Centre; the restaurant's phone being permanently engaged!). See you there unless you're interested on a slightly round the houses route from Kingston Bridge.
Posted by Anonymous at 15:37 No comments:

Sunday 18th November
Got home well before 4 so didn't have to use up any stored energy for illumination.  Thank you to Andy for a lovely day.  Steph
Posted by Steph at 20:09 No comments:


What a delight to start and finish the day in glorious sunshine!


I believe it was Andy who counted 25 cyclists in Squires cafe at Stoke D'Abernon this morning - but no!  They were not all there to come on the C+M ride to Horsell!


We left Squires for Cobham passing the British Legion hall on the way to Plough Lane en route for Ockam and Ripley.  We waited for a short while in Plough Lane for Graham whose chain had broken but was instructed to continue before the job was finished!  After Ripley we stayed on the Olympic road race route past Newark Priory to Maybury.  Two of our group had dropped behind at this point but had said they would see us at lunch, which they did!


The food was good and promptly served and we were back on the road by 2pm.  The group stayed together through Horsell, leading us onto the canal towpath which was a delight in the afternoon sun!   At West Byfleet the group split with some going to Addlestone and onwards whilst the rest of us continued to Lock Lane, Wisley and over the A3 to Ockham Bites for tea.


It could have been the changing temperature or the hope of getting home before it got too dark that eventually encouraged us to say goodbye!!

Thank you Irene for being back marker to-day and thank you all for coming on to-days ride....Pam :) :) 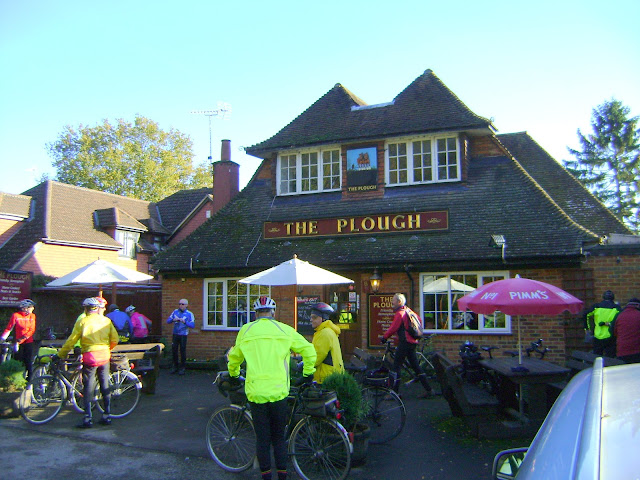 Posted by Tartan Socks(long) at 18:17 No comments: