Summer still hasn't arrived and the Met Office forecast was spot on - six hours of steady rain so little traffic and few signs of Lycra. It was drizzly as I left home but by Runnymede the waterproofs weren't. Just seven (Irene, Alan, Ed, Graham, Pam, Paul, Vic) braved the conditions. David Leach(?) too came and went as our initial thought was "thus far and no further".

But by 11.30 an improvement persuaded us (not Alan) to carry on though not to Binfield: we settled for five miles and not a pub! After the usual back of Old Windsor we headed along the cycle path beside the A308. A few twists and turns through less salubrious parts of Windsor brought us to lunch at Wyevale Garden Centre Dedworth - crowded but prompt service.

On the restart we were greeted with more drizzle. The ride to Fifield was easy but as we turned east, we faced strengthening headwinds or crosswinds - Bray Marina, Eton boating lake, Datchet and Wraysbury. We were "too wet" for North's so we called it a day at Notcutts Laleham. Dry clothes were most welcome after only 50 miles door to door.

Posted by RaasayWarden at 20:34 No comments:

Before leaving the garden centre, our numbers had swelled to a 'bakers dozen' !   Angie and Bob left to do their own thing whilst the rest of us headed into the wind for Weybridge, avoiding the High Street by using , on to the cycle path alongside the A317.  At Addlestone Moor we crossed over to pick up , , into  leading us to .   Gracious Pond Road next which took us to Burrowhill - straight over the crossroads to take a left turn into Ford Road - then a short ride along a rough path took us over the first ford!   Second ford was in and from there it wasn't far to the Garibaldi at Knaphill.      None of the group felt the need to actually cycle through the fords!!

Alan had waved us goodbye at Burrowhill which left 10 of us for lunch where we sat in the garden for it was such a lovely day which came as a surprise to me for I thought rain had been forecast!

Once we had all eaten and drunk our fill we were off to the canal.   I left the canal at Sheerwater to take a shorter ride, (rather than go to ), to .   Lock Lane next, over the A3 at Wisley and onto Ockham Bites where ice creams, as well hot drinks and bites...were very welcome!

Good company and the weather all added up to a lovely trouble free day.    Tony did a grand job as back marker and Terry and Neil were there usual helpful selves!!!   In fact -thanks to everybody for keeping me in touch with all behind me!! 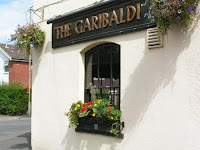 The Pub at Knaphill 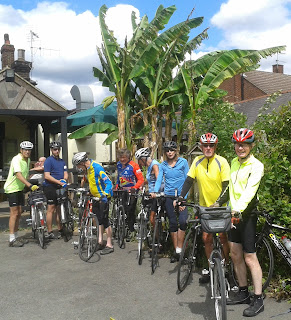 If you look very hard you might see Irene (Ed, get out of the way!)
As for that cheeky old codger behind Paul, I'm very tempted to drop a turd on his pate! 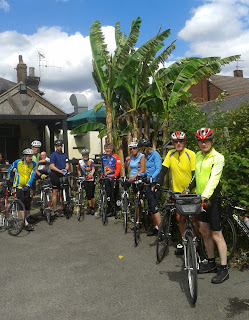 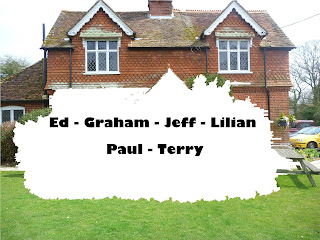 The caprice of mobile technology struck today. My camera app was ousted by a rogue 'WhatsApp' camera app. The photos were there at lunchtime but not to be found when I got home and were invisible to Dropbox. Bring back the Kodak Box Brownie!
Posted by Jeff at 10:56 No comments:

It was damp and cool when Lilian, Jeff, Paul,Ed, Graham and I left Jordan's of Gomshall, and it didn't change very much all day. Our route was Burrows Cross, Little London and Farley Green to Winterfold Heath. Normally mountain bikers by the dozen are on this road, but not today. After a bumpy descent we soon joined the B2128 to Cranleigh, which we escaped by turning into Knowle Lane. We then enjoyed a nice, quiet run south to cross the A281 then via Tisman's Common back onto the A281, albeit briefly before turning south into Haven Road. Shortly we headed west to approach The Blue Ship from the west. (Approach from the west via bridleway and Gibbon's Mill not recommended). After placing our orders we sat outside under cover, but only briefly.

After a good lunch (a little slow service -- but we weren't in a great rush) we headed north to join the A281 before shortly turning off to Rudgwick. We followed the 'usual'route to Capel ie Cox Green and Ellen's Green but then some chose Oakwood Hill and potholed Weare Street (presumably to have a larger choice of cakes). Jeff and I rode via Walliswood, Standon Lane, Mole Street and Ockley - and there was still some cake left.

Less than fifty miles for me but all will have done much more.

Many thanks for your company.

A regular with C&M finally got Wed on Sat, independence day! It was a very grand do with both sides of the families well represented. I was invited along with C&M, KPRC and Epsom CC members to sit on the cyclists table. 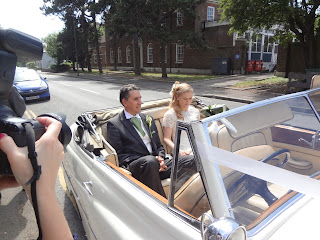