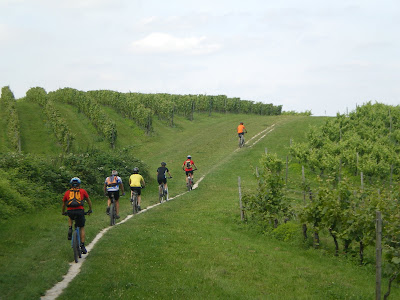 Our Off- road Saturday morning ride developed into an all day ride on 30th July as Keith and Andy enticed us over the North Downs and through the beautiful Colekitchen valley to Gomshall. From there we followed the delightful Route 22 back to Dorking. A Corking days ride. Here we are crossing the Denbies Estate.
(This blog was posted by Simon M)
Posted by Pete at 08:59 1 comment: 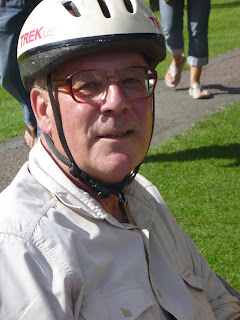 A warm welcome to Peter Carpenter 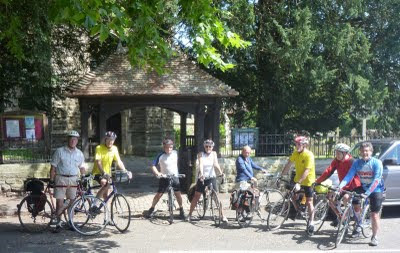 Fed and watered at Taplow 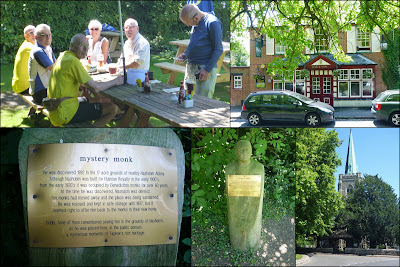 Lunch at the Oak and Saw with the Mystery Monk in the garden. 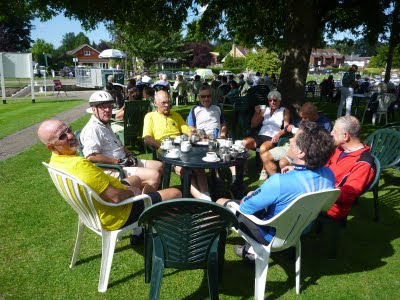 Tea in sunshine at Shepperton Lock
Posted by Jeff at 00:06 1 comment:

First of all, my apologies for such a late report.
Not a large group to-day -all but Jeff had arrived at elevenses by the time I got there. Graham had kindly led Ed, Ian, Peter, John G.and Tony (I think) to Nutcutt's. Terry, Alan, Bob, Bill and Margaret were also part of the group - as was Irene who come to join us for coffee but could not stay out all day.
We left Notcutt's around 11.15, making our way into Staines, continuing to Wraysbury, Horton, Datchet and Eaton. From there we cycled across the common at Eaton Wick and turned left to go past Dorney Lake (next years venue for the Olympics rowing). After the motorway bridge we turned to follow the Jubilee river for a short distance leading us to the A4 which we crossed to go up Berry Hill to our lunch venue. A very nice pub, our table had been reserved in the garden and we enjoyed a very pleasant hour there.
Our tea stop was Shepperton Lock which we reached via Maidenhead to Bray. From here we followed a cycle route - Monkey Island to Fifield then Oakley Green, over Clewer Hill to enter the outskirts of Windsor Great Park. We exited at Bishopsgate and took the road to Englefield Green to go over the lights so that we could fly down Prune Hill! Knowing that Jeff is not partial to off-road cycling (and we had already been over some rough bits), I decided it would be wise to stay on the road to Chertsey and so to Shepperton.
We were very lucky with the weather - plenty of sun enabling us to enjoy sitting outside at each of our stops. No incidents - just a very enjoyable day out!
My thanks to Graham and Terry for watching the 'rear end' - Pam :) :)
Posted by Pam at 12:05 No comments:

PLEASE NOTE - that Cheam and Morden are lunching at The Oak and Saw Village Inn, Rectory Road, Taplow, SL6 OET. The runs list states JWD in Maidenhead but neither of the JWD pubs look up to much so I have made an 'executive' decision to change to Taplow!! Do hope this change will not up set the apple cart?
ALSO - you may like to know that our elevenses venue is offering a breakfast deal of 2 breakfasts for £5 which finishes at 11am.
Pam
Posted by Lisa at 20:14 No comments: 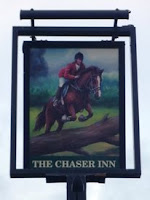 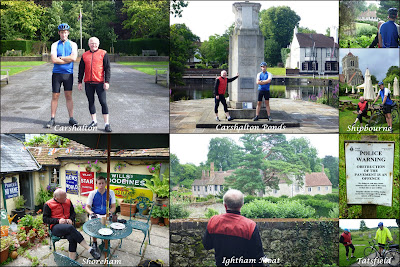 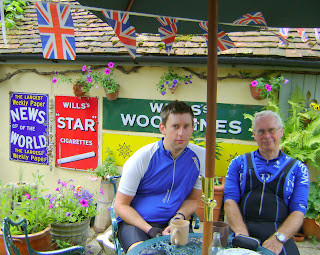 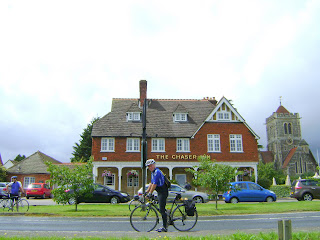 A mostly cool,dull day today with some showers too.
Met Dave at Shoreham's Battle of Britain museum but he was heading home.Just Paul & Jeff joining me to The Chaser Inn reached via Otford where a new café was spotted (11am - 16.30pm on Sundays).South to Seal then the gradual climb to Stone Street.Past Ightham Mote to the village of Shipbourne.
Jeff dined inside whilst Paul & myself sheltered under the parasol whilst a heavy shower passed over.
Being Kent,a steep climb was unavoidable today but curiously One Tree Hill near Underriver scores two chevrons on my 1981 "188" but only one on my 1998 edition.Either way it's better than the back breaking Bayley's Hill.
Tea at Tatsfield but no views of the weald today.

Notice the NOTW advert in the Shoreham pic.
Posted by Tartan Socks(long) at 13:03 No comments: 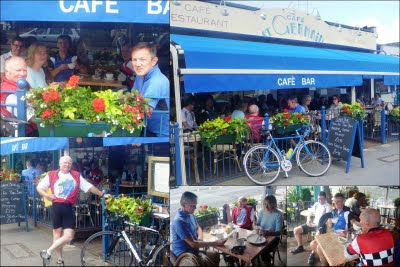 Andy led a brilliant and complex route, with a minimum of tarmac of course, to the excellent Café St Germain at Crystal Palace with real coffee! I think the camera lens was a bit steamed up after Spa Hill. Sorry I couldn't go all the way. The cafés are more spectacular than the stadium! A warm welcome back to David Leach - he likes hills.
Posted by Jeff at 21:53 No comments: 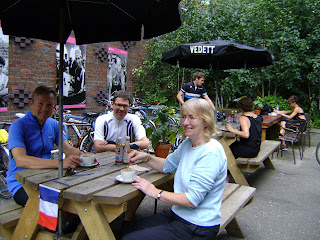 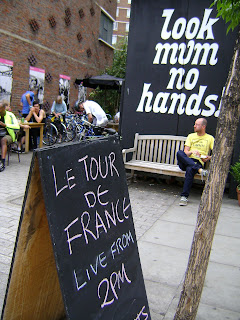 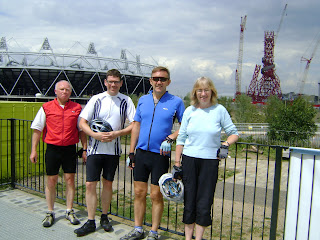 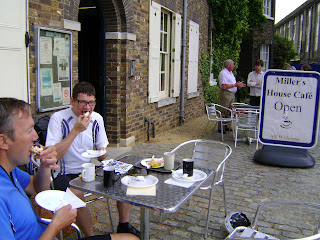 Today the CTC abbreviation means "Café to Café" with no less than 5 stops.
The first was at Café St. Germain reached via lower Sutton,Mill Lane Carshalton,Beddington Park and the ever so slightly steep Spa Hill,Upper Norwood.
As ever Dave & Don were already tucking in to something cooked,Stephanie settled for scrambled egg whilst the leader had a modest cappuccino £1.75.
Just Jeff heading home whilst we continued north via the delightful Turney Road,Dulwich & the cycle path that leads up to Champion Hill.
Still northerly :Camberwell Grove to Walworth and the cycle route that by-passes Elephant & Castle to pick up Cycle Super Highway 7 (CS7).
Southwark Bridge still going north to Guildhall then the back doubles around the Barbican to emerge at LMNH in Old Street (pic).
It was just after midday so just liquid refreshment here but I did "borrow" some oil to lubricate a dry chain.
A cyclist's café/workshop in relaxed surroundings it was a case of spot the "non-cyclist", plenty of memorabilia around and references to the TDF being shown on a big screen (pic).
We turned East and were shortly in Victoria Park where we picked up the canal leading to the Greenway and the Olympic 2012 site.
I didn't expect to see Simon Legg & about 20 of his ACF pals enjoying lunch but we had a nice chat all the same.
The queue in the ViewTube café was slow moving so we decided to move on and ended up at Three Mills House café,Bromley by Bow (pic).
Very reasonably priced cream tea (£1.90) and freshly made sandwiches for the starving.
The House Mill is believed to be the largest tidal mill still in existence in the world originally built in 1776.
Leaving the 4th café,it was directly south to pick up the CS3 to Tower Gateway and CS7 to tea on Clapham Common. 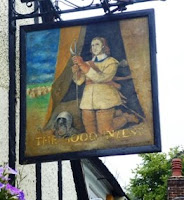 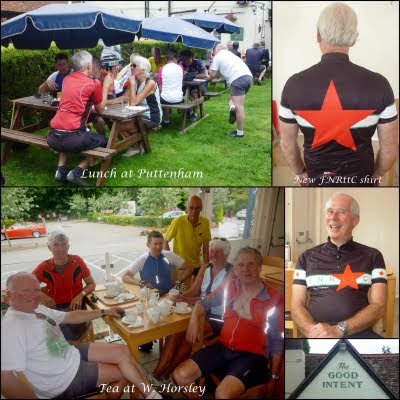 The C&M pilgrims at lunch and at tea.
Please forgive the self-indulgent flaunting of the splendid new FNRttC shirt.
Posted by Jeff at 18:54 No comments:

A warm and sunny morning and the prospect of a perfect day for cycling. Surprisingly the group assembled at Clandon didn’t include Andy but as nine of us set off towards Guildford we came across a lone figure waiting at the Clandon traffic lights.

Excuses made we all set off into Guildford, down York Road and round the one way system before leaving the traffic to follow Milmead and Porridge Pot Alley. Then back to the main road and up Sandy Lane to Farncombe. Having tackled Farncombe Hill it was an easy run through Hurtmore to Shackleford. Then a left turn along Lombard Street ( not in EC3) took us through the hamlet of Gatwick ( no planes here) to turn right at Cutmill crossroads. A long gentle climb across Puttenham Common was followed by a short descent bringing us into Puttenham directly opposite the Good Intent.

Lunch was swiftly served and by this time your leader had exercised his prerogative of changing the tea stop from Newlands to W Horsley. So we tackled the last 40 metres or so of the Hogs Back to drop down to Normandy and the Christmas Pie trail into Wood Street village. Then around Guildford via Gravetts Lane and Jacobs Well to the A3.

At Send we said goodbye to Graham, Irene and Gill who headed home while the rest of us went on to West Horsley via Tythebarns Lane and Jury’s Farm.

Posted by Tartan Socks(long) at 15:38 No comments: