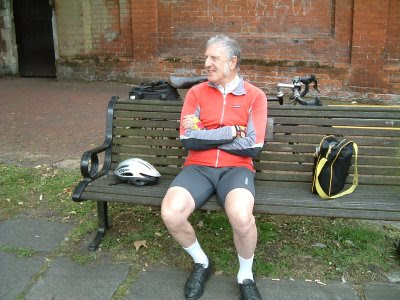 Ed at Carshalton, marvelling at the London to Brighton Mayhem
Evidence today, not of the tribal North/South, but of the less familiar East/West divide, as Ed and I, seated by Carshalton Ponds, surveyed the terrifying stampede of cyclists, drawn together by instinct like wildebeest, on their annual migration to the watering-holes of Brighton. But what of the springboks of the C&M? Have they been swept away in this torrent, or was it an impassable barrier? Suddenly, one maverick emerges from the dust and bounds towards us – Graham! Our number now magnified, a determined trio set forth, not for the floodplains of Runnymede, not for the ballyhoo of Brighton, but for the foothills of Lullingstone.

The hamlets of Wallington, Waddon and South Croydon flew past. We then pulled back the 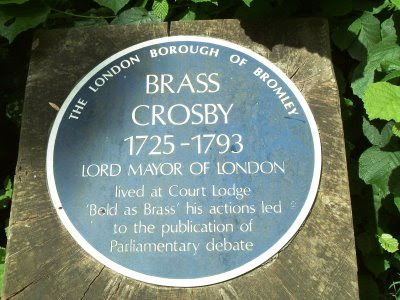 joystick to climb Croham Hurst and Ballards Way to the heights of Addington, followed by the dive down Gravel Hill past Addington Palace, where the formation briefly split, before reforming to bank N.E. along Kent Gate Way. Then up again along Layhams Road, North Pole Lane, Jackass Lane and across the A 233 to Green St. Green. Another climb up Worlds End Lane, where the higher you rise, the more exclusive become the lodges. We pass the former residence of a once Lord Mayor of London, Brass Crosby, whom the roadside plaque remembers as the instigator of published records of parliamentary debate and the origin of the expression “bold as brass”. So on to Well Hill and the greens and fairways of Lullingstone Golf Club. 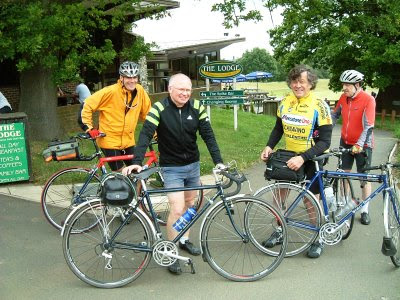 In the clubhouse, head buried in his broadsheet, David W had ploughed a solitary furrow. Now we are a quartet! Half-way through an excellent bacon bap, a steaming Andy appears, glowing like a nuclear reactor, having overcome mishap after mishap: forgotten water-bottle, southern rail bike ban, puncture; that attendance point not lightly to be surrendered.

A quintet therefore takes off on our second leg through Crockenhill and Farningham, where we lose David homeward bound and revert to quartet form; then the long drag up Mussenden Lane before the heady descent down Speedgate and up Billet Hill to our objective: The White Swan, Ash, nearly overshot by over-eager Ed. 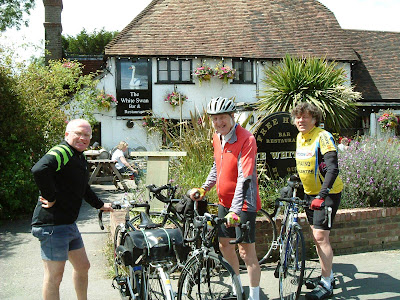 After BYO al fresco, it is homeward bound along the Pilgrim’s Way to Otford, down Polhill, up Star Hill to Knockholt, up Shelley’s Lane, down the terrifying, evil-cambered one in four at Cudham, along Downe Lane to tea at the Church Hall, courtesy of Downe Am. Dram. Soc. From here on, a gentle down-hill home – well, nearly - through West Wickham, Croydon, the Flyover with the parting of the ways at Waddon.
For me, a gentle climb home, 69 miles behind me; a shower and refreshing beer before me. What more could any man desire?

Soirée at Staines chez Hostess Irene.
Many thanks to the Queen of lemon drizzle, fruit cake and honey and marmalade.
This could become a regular tea stop 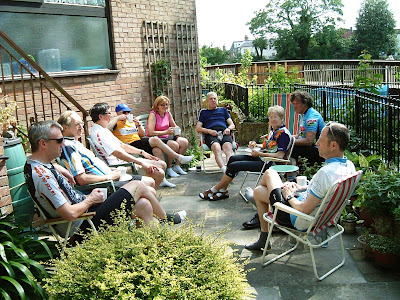 I start with a recent reminder from Raasay of the Great Leader.

As usual she wasn't present at the start. With many raiders away in France, it was a strange brew at Kingston with welcomes back for Frank, Francoise and Matt and a welcome for Nick. Working to the strict deadline we headed through Hampton Court, Lower Sunbury, Shepperton and Laleham to Staines where she awaited. Rather unwisely I tried to find Malt Hill without a map; it proved elusive and too steep for many but we still reach Savill Gardens before 1030.

On the route to lunch the uncommon (Cumberland Lodge) preceded the familiar: Forest Lodge, the Peanut, Maidens Green, Moss End and up Tickleback Row to the New Leathern Bottle on Jeallots Hill by 1215. Naturally service was prompt but it lead to the pariahs (BYOs) being banished to the roadside where they were later comforted by the departing David.

Andy arrived having found the way open through the research establishment! Roused from our torpor we sought out Warfield Church, headed down B3034 and then via Chavey Down (a lot drier than on our previous visit) reached Ascot racecourse. Blacknest Gate was perhaps a surprise choice for our second entry into a Park now busily preparing for Polo. After Tite Hill we were delayed at the Pooley Green crossing but the tea was jolly fine especially the Lemon Drizzle Cake. Only 50 miles door to door on the pleasantest of days
Posted by Anonymous at 20:23 No comments:

It's to Brighton gently. For details see:

http://www.cyclechat.co.uk/forums/showthread.php?t=35923
Posted by Anonymous at 21:14 No comments: 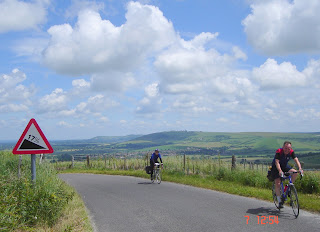 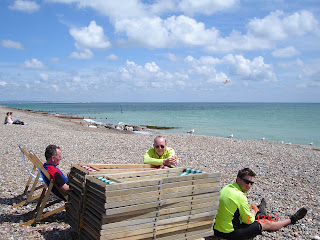 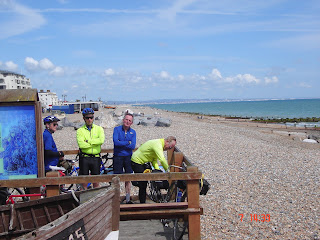 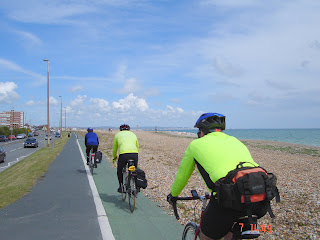 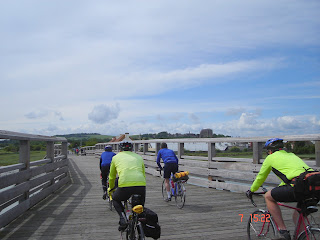 A naff forecast coincided with a coast run so we were back to single figures........a shame because it proved one of the most enjoyable rides of the year so far.
I met up with Steve(L),Jeff,Paul,Richard & Dave at the Spoons in Horsham where at least one "breakfast" was consumed.
So with showers forecast,the destination was unclear but we were soon at Dial Post and the wonderful lane that emerges at Ashurst.
B road to Steyning where Dave parted company and we climbed Steyning Round Hill,a couple of arrows on my OS 198 where everybody got off (not me though) with either mechanical (excuses) or just exhaustion.
Downhill (29 mph) then straight to the pier at sunny Worthing.
As Steve headed off to the nearest Spoons,we sat munching our sandwiches in unbroken sunshine,quite remarkable except that it felt like April.
The return.........easterly along the front NCN 2 as far as Shoreham.
This is where we joined "Lard Armstrong" & "Tubby Merckx" training for a forthcoming ride:
http://brighton2barcelona.blogspot.com/
Back through Steyning avoiding the SD,then north on the traffic free B2135.Downs Link from West Grinstead straight into Southwater Country Park (Cowfold is now a Indian Restaurant).
A conventional route home mostly wind assisted. 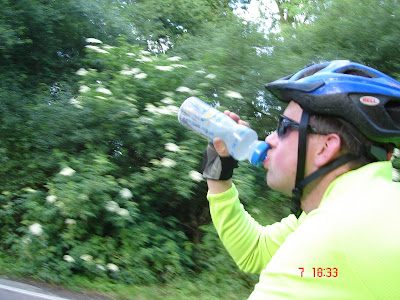 Posted by Tartan Socks(long) at 18:57 No comments: