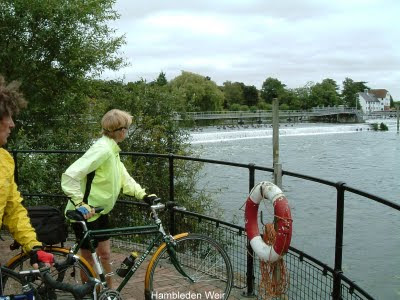 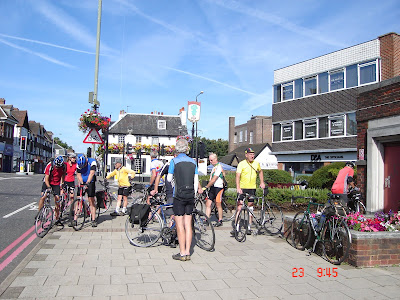 To see Ray Dare at North Cheam is a rarity..........but at Carshalton Ponds?
I think we had double figures to Bat & Ball,in part due to the beautiful weather but possibly a new destination (Tudeley in Kent).
The route...........simply a familiar course via West Wickham public convenience (see pic),Coney Hall,Jackass Lane,Keston,the truely awful 1 in 4 up to Cudham,Knockholt,Star Hill.......... wonderful downhill,Otford then to JS.
Just before noon,ten of us,with the sun still brilliant and not a cloud in the sky,headed south through Stone Street,Plaxtol,Hadlow where Kent's infamous hills disappeared and sat navs had flatline.
We ended up at the George & Dragon,Five Oak Green (no knife and fork required).
Half past two meant lunch was a leisurely affair with nobody in the mood to move.........but eventually it was up the busy A245 to Sevenoaks Weald and the return of the b***dy hills!
The killer for your correspondent was Bayley's Hill.........not nice after 55 miles and 25 degree heat.
Not suprisingly,Ed succombed at Ide Hill and I decided to join him and Ian for a late tea in "97 degrees" a pricey alternative to Tatsfield............
Posted by Tartan Socks(long) at 18:11 No comments:

From ashes to ashes 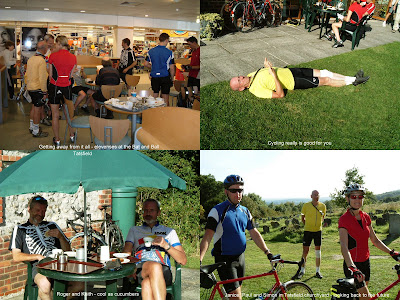 The Tatsfield tea room stayed open just for us - you should have seen them 20 minutes earlier! 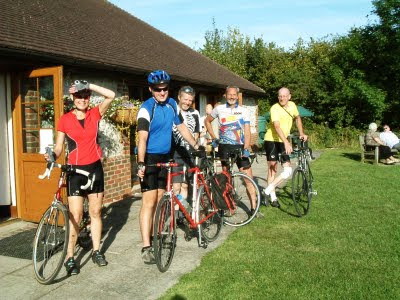 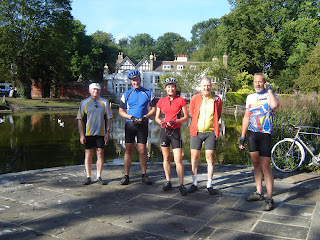 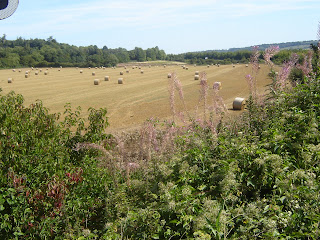 Dropping down to Otford 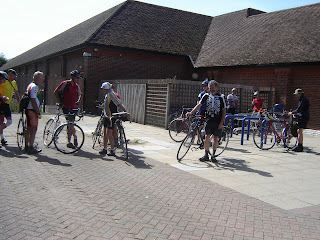 Leaving Sainsbury at Bat & Ball
Posted by Ray Dare at 21:41 No comments:

The Sun Inn at Dunsfold 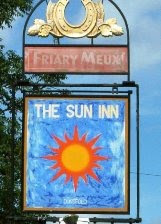 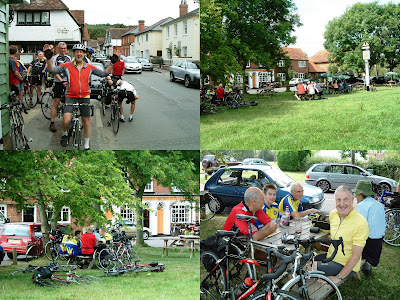 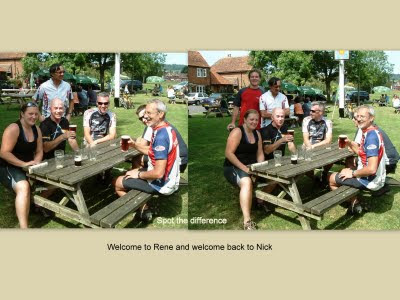 At Shere at the Lucky Duck Cafe in the garden basking in the morning sunshine Don, David & Bob were joined by Pete M & Lisa (on fixed wheel) then Terry & the main group from Nth Cheam led by todays leader Ed Sharp: ie Rene, Janice, Nick, Lawrence, Keith, Ray, Pete B, Pete F, Paul & Jeff.
A steady climb into the shady lanes over Winterfold Heath followed by a steep descent of horse block hollow & a furiously pedaling Lisa! Lunch at The Sun, Dunsfold where Bob reappeared.
A Pleasantly warm afternoon wind assisted through Cranleigh accompanied by the sound of deep throbbing car engines leaving the Cranleigh Classic Car show this was swiftly followed by the colourful sight of The Sigma cycle race speeding towards us in three groups and on to a very relaxing tea at Tanhurst Farm.
70+ miles well led by Ed.
Posted by Pete at 08:21 No comments:

Posted by Anonymous at 07:34 No comments:

Feeling a little stiff after the latest FNRttC, I caught the bunch as it was entering Reigate Garden Centre. From time to time another appeared until we were a dozen strong. With Keith in laidback form, I went to the front losing Ian before Leigh! He found locked gates, the railway and so on before rejoining for lunch. We continue through Newdigate and Capel noting that the church was open for teas. Down Weare Street to Walliswood brought us to the long drag through Forest Green and up to Holmbury St Mary where the Kings Head was the chosen watering hole. After collecting the Assistant Manager from the church I returned in time to witness the collapse of the party's picnic table.

After lunch we split into softs and hards; the former headed back to Forest Green whilst the latter sampled Pasture Wood and Leigh Hill Place. This was a perfect arrangement as the Capel church sprint caught the soft backmarkers as they were entering the churchyard. A long break then ensued; Jake and Grant arriving as we were leaving. For me that was under 70 miles (and 150+ miles for the weekend) on a sunny and warm day.
Posted by Anonymous at 08:39 1 comment:

Lunch at the King's Head, Holmbury St Mary
(When the oil runs out, we'll have it to ourselves!) 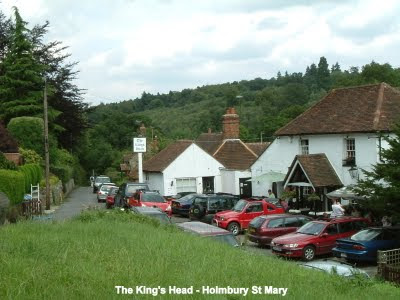 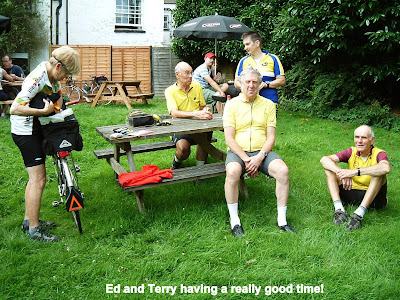 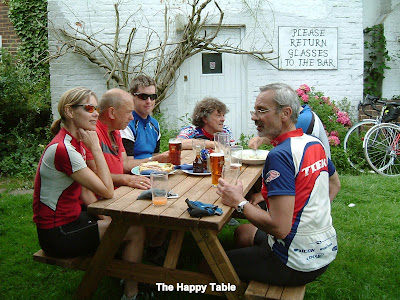 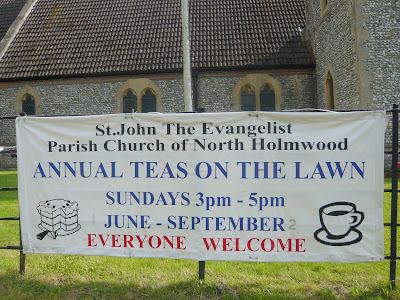 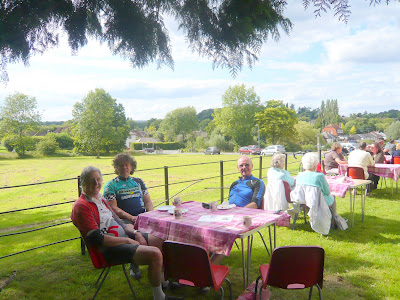 Posted by Tartan Socks(long) at 16:34 No comments:

After last week's Van Winkle episode, an early start was a must. Jeff espied my fleeing mass just after Rusper and together we descended into Horsham via Old Holbrook. Three even earlier birds were sampling Salisburys cafe and we waited and waited. Eventually Andy and Ed appeared via Ashstead Park, The Gap and Old Holbrook around 1130 by which time David and Don had flown the nest. Andy brought news of Richard's indisposition and a change of itinerary; he was for The Blue Ship and Holmwood Church to which there were no dissenters.

A hour later l led off on a brief tour of East Sussex southwest through Barns Green then west past Frank Patterson's "cottage" where we tarried. On reaching the A29 our route went north to Sotheby's (now luxurious flats) and west on favourite lanes to the Haven where Bob rejoined. Apart from a detour past Rudgwick's brickworks, we went the familiar route home taking it in turns to lead. The church was reached before four and there we dwelt - words with the vicar were followed by more words and then more words. They'd packed up almost everything by the time we dragged ourselves away around 1745. All in all it had been a most relaxing day.
Posted by Anonymous at 20:22 No comments: 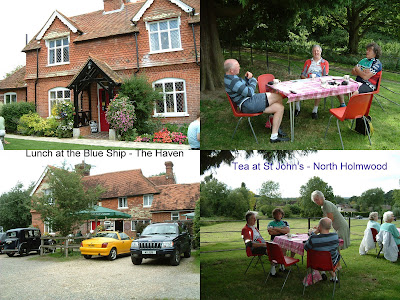 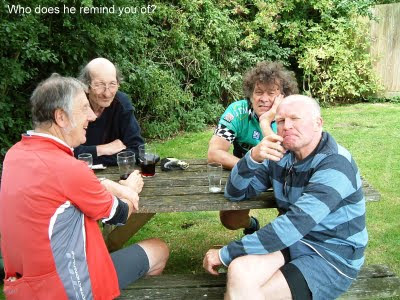 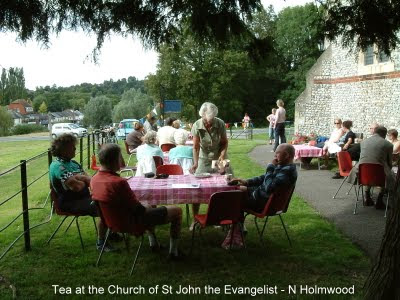