I arrived at Beare Green to find Bob & Don sitting outside the Blue Moon café but sans refreshment.Grrrr .........the place was closed AGAIN.Keith & co considered alternatives whilst I removed 2 thorns from my rear tyre.Thanks for the inner tube with longggggg valve Ed and soon we were heading toward Rusper Golf Club.
Nice spot this with plenty of outside seating on this,a non-typical summer's day 25°+ temperature.
Post midday we departed for lunch at Staplefield via Rusper,Colgate & Slaugham.Another nice spot with most drinkers avoiding the strong sun in the shady garden.
A late tea was enjoyed at Brockham by all..........including Brian Greenwood with his family.
Pebblecombe Hill was a nightmare with a combination of closing of the Betchworth crossing twice in 3 minutes & a broken down car stuck half-way up.

I spot North Holmwood church serving teas right through the next 2 months until the end of August every Sunday.
http://www.stjohns-northholmwood.info/diary/events_diary.php

My mate's missus left him last Thursday, she said she was going out
for a pint of milk and never come back!
I asked him how he was coping and he said, "Not bad, I've been using
that powdered stuff."
Posted by Tartan Socks(long) at 21:10 No comments:

Pub sign with two heads. Judge on the right, but who is the figure on the left? The Victory Inn has no nelsonian connection but commemorates a legal victory in obtaining a licence, in the face of local opposition, in 1848. 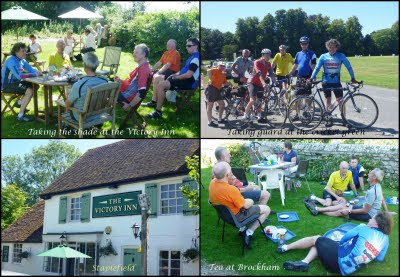 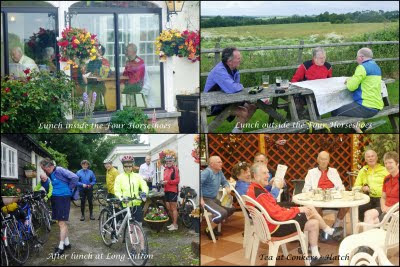 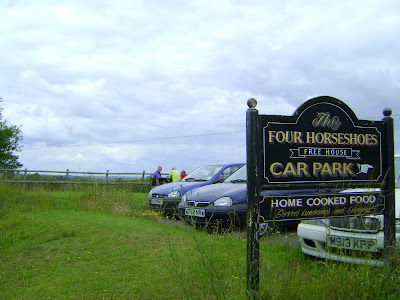 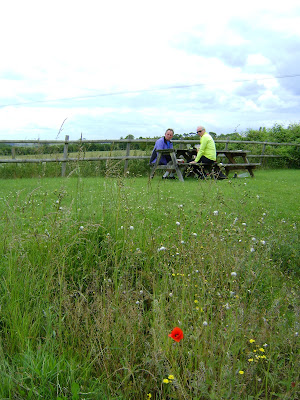 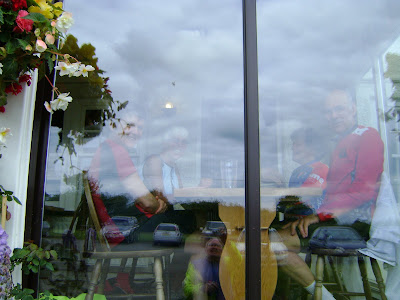 On train assisted rides,there is always a degree of apprehension..........will anyone turn up and if they do........will we all get on the train without causing guard rage/delays or oil on the seats.
Happily, all went smoothly today with 6 at Surbiton but at Woking,why is Terry & Pam getting on the portion of train going to Alton?
A sprint down the platform and we were soon all together in a shortened train to Fleet where Dave was tucking into a bacon buttie having ridden the 25 miles from home.
Dave's lunch cooking duties sent him east whilst we continued south towards Crookham & Crondall pop 3463.
I decided with time on our hands,to do a couple of loops going to Bentley,home of Robert Baden Powell (Scout movement) & the owner of the White Star Line - Harold Sanderson who learnt of the sinking of the Titanic at home in Jenkyn Place.
Lunch was at The Four Horseshoes,Long Sutton.A quiet pub in a generally quiet part of the world.Little traffic make the lanes a joy to ride along,in fact you are more likely to come across horses than cars!
The route was to continue west through Upton Grey then north to Mapledurwell and early tea at Conkers Garden Centre,Hatch - cake & tea £2.99.
We departed at 3.15 to head back to the station via Newnham,Rotherwick & Hartley Whitney.
All safely aboard the 4.32,my first train assisted since October 2008 passed without a hitch.............well almost.The 21 degrees forecast by BBC News was a non-starter in fact it was a distinctly cool feeling day for June.
At anyrate thanks to Graham,Pam,Terry,Sally,Ed,Richard & Jeff for their company.Such a great area to ride a bike and only 37 minutes away!

Check the London Calling link on this cycling videos site.Whatever you may think of the riding........it beggars belief!
http://www.digave.com/videos/

Stop Press...........according to Countryfile (on BBC iplayer) spectators will have "roped off" areas on Boxhill to view the Olympic Road Race.
Posted by Tartan Socks(long) at 20:43 No comments: 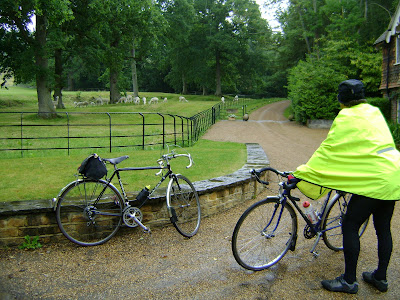 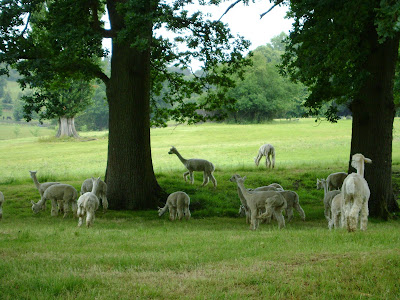 Following the awful weather of today,I've found this from the Met Office.
The rainfall radar in real time.Images at half hour intervals for the last 6 hours.

Might be useful in deciding the chance of rain in our region.

Posted by Tartan Socks(long) at 23:10 No comments: 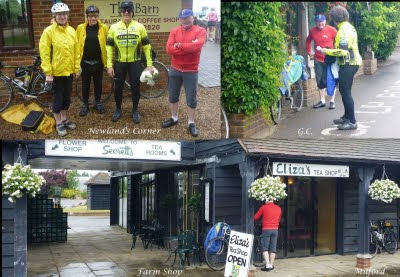 See Graham's report below. The photoshoot at Farncombe was rained off!
Posted by Jeff at 11:06 No comments:

Bad weather albeit of a warmer, calmer and drier variety has followed me South from Raasay. There were just three (Steph and John) to witness a dull start and  by Epsom we'd stopped twice to improve our weatherproofing. A steady drizzle set in as we splashed our way to Oxshoot, Stoke D'Abernon and Ockham and past the Prison being overtaken (as is usual these days) by other cyclists relishing(?) the conditions. I'd forgotten just how steeply the A25 climbs to Newlands Corner where Jeff and Andy were seated.

Around noon Jeff stuck to the road whilst Andy and I slipped and slid along the NDW to greet the Chilworth Manor alpacas. We regrouped at the level crossing;  (eventually) Jeff being confused by two Chilworth level crossings! Wonersh and Bramley led to the Munstead climb without traffic thanks to a "gas board" hole. The tardy restart meant the lunchstop was well out of reach so we sampled firstly Milford's Secretts Farmshop (cakes only) before settling into Secretts Garden Centre.

Tea was now but 3 miles away so a loop was needed to preserve respectability. Thus we rode near Elstead, Hurtmore and down Farncombe Hill to the Boat Centre which regular teapot refills kept us chattering for over an hour. After that it was each man for himself - the near deserted Guildford High Street summed the day up well. 72 miles door to door.
Posted by Anonymous at 06:37 No comments:

1. Putting a brave face on it. 2. Raleigh Rapide - Mike has had it since 17! Look at those friction-free steel rims. 3. Let them eat cake- but somewhere else!

At North Cheam I was glad to see Brian who on this Sunday had decided to cycle there for the start rather than go to elevenses direct otherwise it would have been a solo ride for me to Godstone. Making good time we arrived at Café Nova around 1045 where we met Andy, Jeff, Bob and Terry.

It was near Bletchingley that the first drops of rain suggested that I had paid insufficient attention to the weather forecast as I had been under the impression it was going to stay dry. For most of the day it was fine drizzle rather than heavy showers but not the sunny 27˚ we had enjoyed the previous day. Let’s be positive, we do need this rain in the south-east.

Leaving Godstone I feared that I would be the last to be left struggling up Tilburstow Hill. The reason – my usual bike is in for a service which meant bringing out an old friend, the Raleigh Rapide that I have had since my teens (the bike has given good service, that was many moons ago). It is not exactly as it was when first I rode it, gone is the 5 speed Simplex derailleur and cotter pins. I still have the Brooks saddle (I should have re-fitted it for the ride) but the rather natty white saddle bag that once accompanied it has long been lost, probably left in the garden shed or loft in a house move. Those on the ride on Sunday will agree – it is not a light machine!

The bike does not quite live up to its name (maybe it did when I was 17) but nonetheless I think our pace was reasonable. We approached Dormansland from the north east having skirted Lingfield. Beef sandwiches were on the menu at the friendly Old House at Home pub. The weather had not improved as we made our way to tea via Bones Lane and Cogman’s Lane but we were sustained by thoughts of the cakes awaiting us at Bletchingley. Sadly this was not to be. Lamingtons, so highly praised on our last visit, is now closed on Sundays.

Distance covered: unknown, there were no cycle computers in the 70s and the little counter once attached to the front wheel hub has long gone the way of my saddle bag.

Posted by Tartan Socks(long) at 15:37 No comments: