The unaccustomed frost and ice seemed to make many quite light-headed. Redhill aerodrome was bright and sunny; the stretch to Wychcroft House  across two farm tracks manageable and uneventful. However, the decision to attempt to tackle the track past Wychcroft to the Fox and Hounds was a challenge too far for me, having reconnoitred the route last year. I therefore chose the High Road up South Park Lane, Rabies Heath Rd and down Tilburstow Hill Rd to the Fox and Hounds, where the farm track meets the tarmac. There was no sight of cycle tracks nor of lycra across the fields, but perhaps they were in front of me. After waiting a while and ignoring the closed road sign, I pressed on along Hart's Lane and Miles Lane to Tandridge, across the A25 and  up Chalkpit Lane, along The Ridge to Botley Hill, then down Beddlestead Lane, where for a few hundred yards, the ice made Hessiers Hill unrideable and nearly unwalkable, to arrive at the White Bear at Fickleshole, expecting a jovial welcome. The pub should be called The Raft of the Medusa. No twitch of C&M life to be seen. Ian A arrived to share my consternation. I then unearthed my mobile to find messages to alert me that the group had been delayed by briars and ice to take lunch at the Barley Mow in Tandridge, where Paul and Dave were repairing broken mudguards and Daniel failing to repair a puncture, with a faulty tube and no spare patch. Not sure how he managed without help.  Ian I reluctantly left to dine alone and ploughed my furrow home, to arrive in blazing sunlight.

The Lone Rider
Posted by Jeff at 00:35 No comments:

Now it has to be said that nothing much happens on our rides............................other than the pursuit of climbing,freewheeling,eating,sweating,laughing,etc,etc.
However today was different.
I set off and nearly hit the deck within 5 minutes of being on the bike.
A very heavy frost had caused a invisible coating of ice on roads that had barely dried from significant rainfall in recent days.
I arrived at M & S Banstead to find Ed & Dave seated.Daniel arrived within a minute of departure and we were soon freewheeling down Holly Lane.
I decided to ride (illegally) up Castle Road to emerge at Elmore Pond.Within a minute of telling the guys "it's OK ,we're unlikely to see any vehicles"..........a BT van appeared around the bend.
Instead of the familarity of Markedge Lane,I continued to Reigate Hill where we posed for pics.
We walked down Wray Lane to the cyclepath then on approaching Redhill town centre we came across a very icy stretch of road where we needed nerves of steel.
Still all upright, it was up and down to Hooley Lane and Philanthropic Road.
Arrived at Redhill Aerodrome at 10.40am after a 9.05am start.
Our four became eight as we headed east using the bridleways parallel with the A25.
Henshaw Farm, Cuckseys Farm to South Park Farm where Jeff left us,presumably prefering the tarmac.
The map (and Paul's SatNav) indicated a continuation of the track past Wychroft House to emerge south of Tiburstow Hill near the Fox and Hounds,which we took despite being unkept at it's end.
Still going east it was Harts Lane to cross the A22 into Miles Lane.
This is where the fun? started.
A gentle downhill stretch on a normal day but within seconds I was struggling to stay upright.
I heard a rider fall (Paul) and shortly after Dave fell also.Whilst composing ourselves and checking for damage we almost witnessed a head on collision between two cars.
It was at this point I decided to make for the nearest hostelry (Barley Mow,Tandridge).
I managed to repair both Dave's and Paul's mudguards that had broken in their falls.
We were about to leave (13.50) but were delayed because Daniel had a puncture.It soon became apparent this was no quick tube replacement and we soon departed leaving him to find the source of escaping air.
Down to four now as Helene had joined Terry taking the main road home.
My route home included a mile of the A22 to Tupwood Lane where I had a puncture.
The "cyclepath" along the A22 was covered in twigs,branches and fallen trees from the storm of 23rd December ,but I quickly found the thorn and after consulting with a bike riding family out for a spin,made for Caterham via Gravelly Hill and Stanstead Road.
We "lighted up" at the Rising Sun,Chipstead Valley...........home about half-four.

I was amused to read this article: 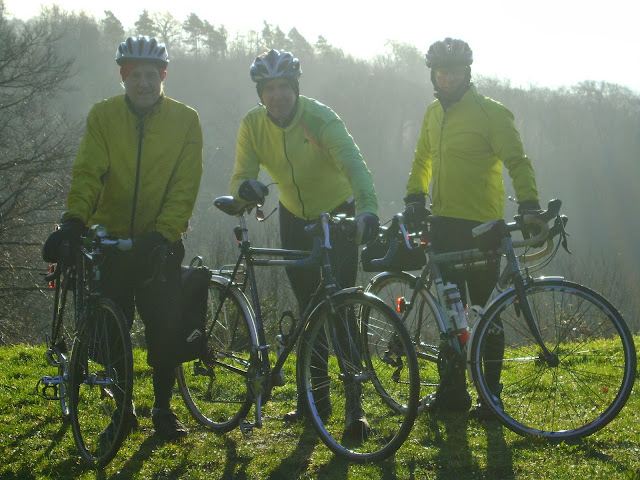 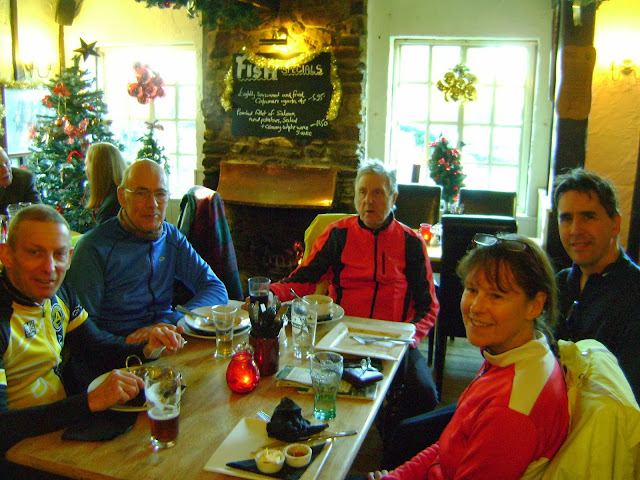 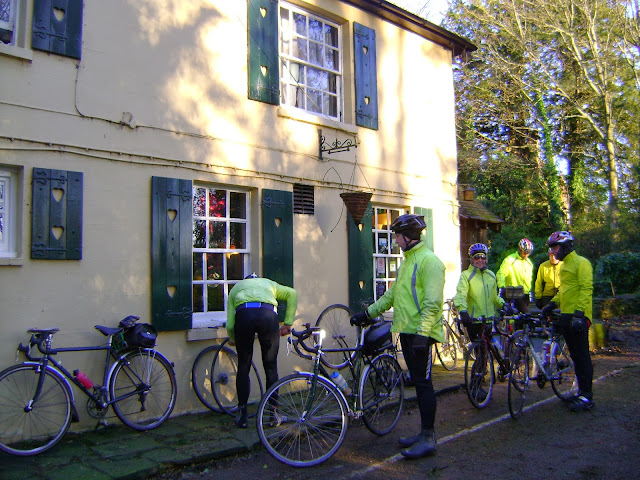 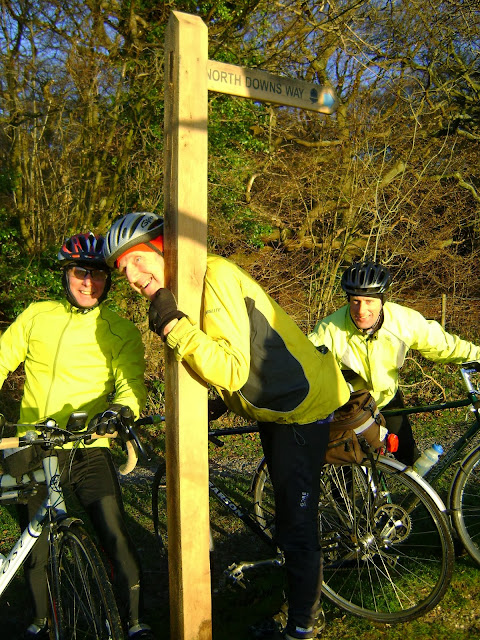 Posted by Tartan Socks(long) at 22:06 No comments: 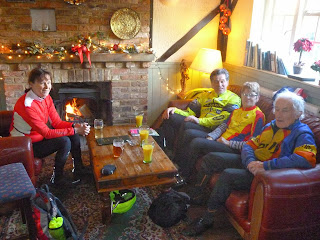 14 turned up at Fairoaks Airport this morning on a beautiful sunny and glorious blue sky day.  8 left just after 11 o/c to proceed to the lunch venue, via Accomodation Road, Trumps Green into Wentworth Golf Club, a short burst up the A30 then right into Bedford Lane to Blackness Gate, Mill Lane and onto Woodside at the Rose & Crown.  We had a good lunch and were able to leave at 1.45 pm.

We returned via the peanut roundabout into Windsor Park in the beautiful sunshine and proceed to Tite Hill, Egham, Staines and onto Squires G.C at Halliford where we were able to partake of tea and cakes. It was still light when we all left so hope everyone managed to get near home before night descended.

Thank you one and all for bringing the beautiful weather and making it a lovely day. 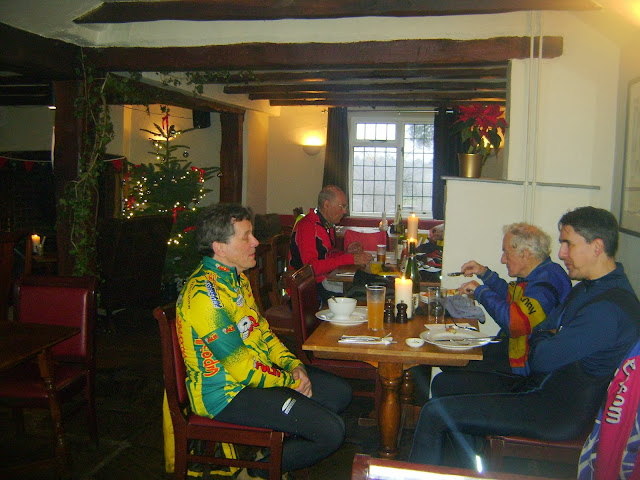 Posted by Tartan Socks(long) at 20:46 No comments:

As nobody else has...

What northern folks call dreich though it started fair. Sixteen was our number at Sainsburys Cobham with half that number led by Ed exiting via the back door into Cobham. A hint of rain became light drizzle not long after the restart.The route could not have been simpler with just two turns, a left into Effingham Common Road, and another after Crossways Farm into Abinger Lane.

In Critten Lane someone has erected three signs, one of which compares it to the roads of Baghdad and Gaza; fair comment I cannot say as I have visited neither. As we mounted the final ramp the rain proved so much for the editor who was last seen scuttling off to his warren. After stowing the steeds in a stygian barn at the rear of The Abinger Hatch, our early(1215) arrival meant seats were available. Many tucked into something hearty; our trencherman setting a hot pace with two courses and two pints (or was that three).

Ed's had ideas about Coldharbour but the noes had it. So we reversed our outward journey with Ed and Richard walking White Down. The Vinery was the target though I didn't stop preferring a watery crossing of Bookham Common from Maddox Lane. I reached home in the light and dampish - the forecast heavy rain not arriving until well after dark. Barely 40 miles door-to-door.
Posted by RaasayWarden at 21:05 No comments: 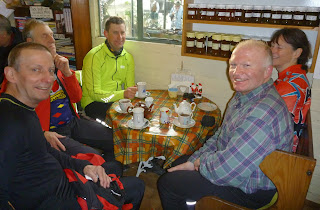 We must include a photo of our doughty leader Andy enjoying a pot of tea at Fanny's Farm Shop, that he now appreciates as great value for money (VFM), not to mention the mince pies and cake. Andy could enter Mastermind with the speciality subject of the cost of a cup of tea at any cycling venue in S.E.England. He would score a max.
Posted by Jeff at 10:48 No comments:

Posted by Tartan Socks(long) at 20:49 No comments:

With Laleham less than an hour away, there was time to enjoy Bushy Park's avenue of hornbeams (planted 1702); like most trees, they still had a goodly complement of leaves. And then it was my familiar route via the Feltham wheatbelt, BP and Bronzefield. For such a dull day there was a pleasing(high teens) turnout at 11s.

The faithful numbered a dozen. Once again I failed to navigate out of Egham via Grange Road though this time I didn't need a passers-by's help. And so via Middle Hill we reached the Great Park where the entire (hundreds of them) Red Deer herd was on the move unaided by herders or dogs. And then the fun(?) began. As most waited at the Loch Fyne, the backmarkers were off on a journey which evidently took in Cheapside and Ascot. I'd waited at the turn, but not long enough as they'd tossed in a circuit (partially on foot) of the Peanut. By 1215 we arrived unannounced at the White Hart in Winkfield and were ushered into the restaurant as they were expecting a large christening party (shades of Faygate). But the food came quickly. The backmarkers trailed in some 15 minutes later.

By 1330 we were ready for the road. For me it was an opportunity to explore new territory, one shared with all but the backmarkers who'd seen it, done it this very day! We headed south down Braziers Road and later south down the Coach Road (despite signs, a footpath). Thus we reached the racecourse where we forced to walk as the "turftray" was hors de combat. Cheapside, Blacknest, Sunningdale and Longcross got us to Addlestone where just six stopped for refreshment at Cafe Two. 50 miles door to door. 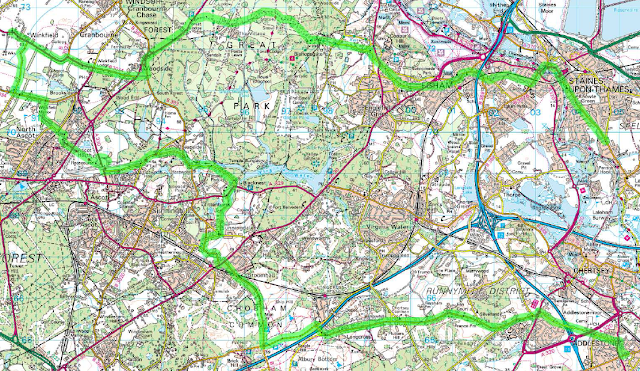 Posted by RaasayWarden at 09:35 No comments: