Martin from the West Kent Hardriders would be proud of Richard's led ride on the 7/05/06.
I failed to notice the Kingston Bridge start which meant I had to ride like the clappers to meet the only two other riders, Richard & Ed.
A very brisk speed to 11's at Burnham Beeches where Bob was waiting together with about 20 fast men from local clubs.The day was fine so sitting outside was very pleasant but we had to hit the road because lunch was a fair distance away. Bob thought we hadn't been to BB for a considerable number of years which is a shame because it is a delightful location.
With Richard ahead desperate to reach Ibstone, Ed & myself decided to lunch at attractive Fingest. Sitting amongst the blossom in the churchyard munching on our sandwiches with the spring sun beating we were truly enjoying ourselves. Fingest has to be one of the most beautiful of our lunch destinations. A drink in the pub over the road concluded our stop and Wow what a garden with a view down the valley to savour.
The route continued back down the valley to Hambledon across the Thames at Mill End then Cockpole Green and White Waltham,all wonderful traffic free lanes, to tea at Savill Garden.
Richard appeared having been about 20 minutes behind us and we left together taking the normal route home. Total 102.2 (easy) miles.

My run was wet, very wet. (21/05/2006)
Thanks to Keith and tandem couple John & Emma Dixon for sticking with me.
Lunch was The Good Intent at Puttenham and tea was abandoned.
Also thanks to Pete Clarke who on going home at 11's informed us that it was only a 3 hour shower!

I also led the following week (28/05/2006) due to Simon Legg's ill health.
A large number of cyclists from neighbouring clubs were at Henfold lake but the owners seemed to cope quite well with the demands of hungry riders. The Downlanders were there as well (again) just a social visit you understand no actual cycling involved.
I put forward Nuthurst for lunch in preference to Wisborough Green due to our late departure.
We left there after mending Daphne's puncture and took a unreckied route directly opposite the pub to climb up past Sedgewick Castle to rejoin the A281 at the Bird of Prey centre.
The normal fine selection of cakes greeted us at Capel with everybody having two except me.
"You can really taste the Whisky!" says Daphne.
Present: me, Keith, Andrew, Pete, Daphne, Jake & Ed, with Bob at 11's.

Volunteer of the year Award 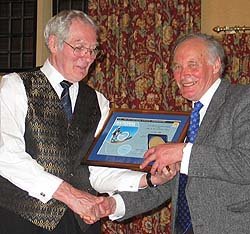 Clive Oxx - Regional Winner for London and runner up as CTC National Volunteer of the Year 2005
Clive has been a cyclist for upwards of sixty years, and a stalwart of CTC for most of that time.
He’s served as District Association Secretary and he’s a tireless organiser of events both large and small. He’s a cycle trainer, and a leader of rides. He edits the Sou’Wester news sheet for the District Association and still works with young riders at the Sutton Cycling group which has brought hundreds of young people into cycling.
He has been nominated this year for an award in particular for his work on behalf of CTC London where he has been the energising force since its formation, stepping down from a role on CTC Council to focus on the regional body.
This award recognises that without him CTC London would probably not exist.
Posted by Pete at 16:31 1 comment: