You can vote £50 million for cycling today! Here are the basic details: The Big Lottery Fund has selected four projects that are eligible for £50M of lottery money. One project will get the lot and this will be decided by public vote.

The Sustrans entry called "Connect2" will provide critical cycle route links nationwide.
More info on www.sustransconnect2.org.uk
Right now you can see info about the projects and vote Connect2 on line at: www.thepeoples50million.org.uk

You need to register first and then you will receive a validation email with a link that will enable you to vote. Only one vote can be made per email address. Online voting ends at noon on Monday 10th. Alternatively you can vote by phone. There will be several ITV1 programmes presenting the projects. The one presenting Connect2 will be on Tuesday 4th December at 11pm. Telephone numbers for voting will be broadcast. One vote per phone. Phone voting commences at 9am Friday 7th December. So spread the word! A big vote from cyclists will win the £50M and will also send an important message about the demand for better cycle facilities.

During my Tour de Dorking finding somewhere suitable for the impending visit of Ed and his merry men and women, I came across the Courtyard Cafe (High St).
Apparently it's been open on Sundays (10-4) since May this year. Talking to the owner, he also plans to open his other cafe, Cromwells in Cranleigh from late March (Sundays) 2008.
Just seven of us at 11's and only five go on to lunch (leaving Andrew & Bob).
I punctured at Rusper and left the others (Ed, Keith, Ian & Jake) to do a loop.
The front tyre was discarded in preference to a tyre I'd been carrying for the best part of a year.
Lunch was at The Royal Oak a short distance away.
After eating my sandwiches in a temporary marquee, probably a left over from a bonfire/barbeque event a few weeks earlier, I joined the rest relaxing on leather sofas in front of a closed fire.
Talking to a local couple, we established the pub used to be two railway cottages and a number of photographs appear to support this fact.
Verdict - A really good pub which requires further visits in 2008 and beyond.
After a mug of coffee (£1) we reluctantly thought about heading home and as we emerged, the forecast rain arrived.
Thoughts turned to hot baths and mugs of tea so it's Goodbye Capel 2007 ..........see you in 2008!
As I write this it's still raining!!!!!!!!!
Mileage 45.5 (from Ewell).
Posted by Tartan Socks(long) at 09:41 No comments:

The e-mail said something like "I'll probably arrive a bit late at 11's, going around the houses to avoid the main roads".
11:23am the drowned rats turned up with new leader Ian at the helm.
Something about a beefy shower in the Croydon area. So much for the "mainly dry" day as promised (BBC News 24) although www.metcheck.com was pretty much bang on.
Midday departure for everyone (Ian, me, Keith, Ed, Steve, Ann, new girl-Emma) leaving Bob & Pete/Daphne.
Before that, my pronunciation of "cafetiere" caused the Waitrose lad to serve up a coffee & tea (cafe-tea), Oh dear!
We left Bromley due SE to Petts Wood via the agreeable Jubilee Country Park, then east past the vast and smelly Allied Bakery factory performing the "Chorleywood process".
Green fields were in abundance as we went through Crockenhill, the delightful Farningham (shame about the M20 noise) to lunch at Horton Kirby.
"The Bull" appears in both 2007 & 2008 CAMRA guides and although quite small inside, the beer garden affords fine views across the Darenth Valley.
After leaving the pub, Ian chose to retrace back to Farningham then Eynsford and the rough road past Lullingstone Villa/Castle/Park and Visitor's Centre to a stonker of a climb up to Well Hill.
We sped past Chelsfield BR, the (always) heavy A21 at Green St Green, High Elms GC to a cracking tea at Downe.
A popular establishment, with a good tea/cake menu and reasonable prices. Hard to come by on a darkening night in early November, anyhow they were £18 richer by the time we had left.
Blinking lights were necessary for the remainder of the ride,which took the familiar Jackass Lane to Coney Hall, then West Wickham, Croydon, etc.
A potentially hilly ride which wasn't too bad mainly due to avoiding Halstead, Knockholt, Shellys Lane & Cudham.
Thanks Ian, you passed with flying colours.
Blog of the week:
Read about Seattle cyclist, Peter Mackay, being shot at whilst riding his bike.........astonishing!
http://petermckay.blogspot.com/
Click on "Not a typical commute home" under archive.

(Or direct link here, Lisa)
Posted by Tartan Socks(long) at 18:49 No comments: 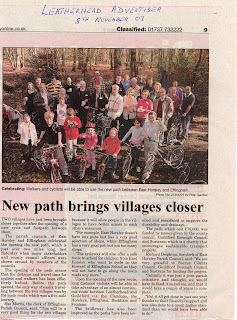 KPRC (in association with C&M) Sat am rides 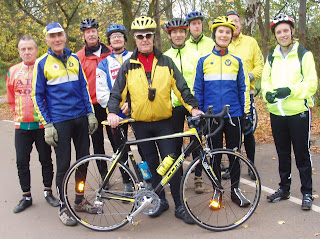 Excuse my intrusion into your Blog mateys but Jake has asked me to promote the KPRC Saturday morning rides by pointing also to the C&M, who make up many of the riders, that, all are welcome to participate, time permitting, to these medium paced rides starting at Horton Country Park Epsom at 10am. The mix of rides and destinations will in future change each week and details can be seen on the DA shared link with KPRC from this blog home page. It also gives me a chance to demonstrate my occasional support (and an excuse to show off my new bike-don't tell her in doors yet), by posting a picky. Give it a try like Toni de Italia often does and then he goes on in the afternoon to ride with the CTC Beginner's. What a fantastic man, I think we should rename him Fausto Copi or IL Pirate. The reason he goes out with the beginner's is that after becoming so shattered in the morning he can beat some easy competition up the hills.
Posted by mike morley at 15:09 No comments:

A healthy number assembled at North Cheam in weather too good for November. The haar was up in Headley but not for long. Here we found a road closure, followed by a second at Betchworth crossing – no problems. Past the Wonham Manor deer we rode before settling down to 11’s at Reigate Garden Centre. By now we were a dozen: Graham, Andy, Bob, Ed, Jake, John, Keith, Roger, Simon, Steve, Terry and newbie Kate. After Lonesome Lane, it was east to Outwood and south to the Hedgehog and beyond, before joining heavy traffic on the B2028. Thankfully a mile later we turned off into Crawley Down and found the Royal Oak hard by NCN21. The menu attracted buyers including moules for Simon; the meal enlivened by reports of Ann pinballing her way from Crawley via Turners Hill! At last we were away down the Worth Way before offroading beside the M23 north of Copthorne. After a tour de Horley, we crossed the A217 and headed towards Irons Bottom. Around here we lost Andy and then Simon off in search. On further cross-examination, it became clear that Andy had assumed the Fox Revived lay on our path - wrong. On the run-in we picked up Simon and then Andy at Brockham church. Trade in teas was brisk thanks to a goodly crowd drawn to the still smouldering bonfire. Our final road closure was a silent A24 – fatality just north of Ryka’s. Around 60 miles.
Posted by Anonymous at 07:47 No comments: