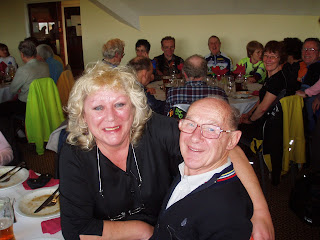 Beryl said "Ray how Dare you be seen out at Sunday lunch with a Serving Wench, I thought you were going out with the cycling club"
To which Ray replied "I was but I bit off more than I could chew"

P.S. You must have a very understanding wife Ray, did she really say that!! Mike M.

Members enjoying lunch at Horton country Park. No doubt Andy or Graham will do a write-up.

A NC start pour moi as today we're heading into the capital and just leader Simon and new member Tony so far but before the off Ed, Steve, Ann and Graham add to the numbers and a couple that last came on my run to Puttenham a couple of years ago (very wet).
We were on a mission so it turned out as we had 22 miles and a ferry crossing between 11's and lunch. So up the A24 we rode dodging parked cars, buses, taxis, pedestrians.........................and arrived at "Teapod", Shad Thames in a little over an hour.
After a very reasonable bacon ciabatta and latte (£2.95) we were away with a few extra riders from ACF.
Again no respite from the awful London traffic, down the main road towards Deptford and the welcome relief of the Thames path at the O2. What a joy, just the odd walker and plenty of SPACE.
A first for me, the Woolwich ferry, free to all, thanks Ken. Along the north bank passing the huge Tate & Lyle refinery at Silvertown.
The company was formed in 1921 from a merger of two rival sugar refiners: Henry Tate & Abram Lyle. Henry Tate (1819-1899) founded the Tate Gallery in 1897.
According to the Guinness Book of Records, the design of the"Lyles Golden Syrup"can is virtually unchanged since 1885 and is Britain's oldest brand. It depicts a lion surrounded by a swarm of bees.
The site at Silvertown (Henry Tate's factory) is one of two in Europe, the other being in Lisbon, Portugal. They import raw sugar from African, Carribean and Pacific countries to convert into pure sugar for industrial & retail consumption.
We found the Regents Canal going west and left it at Kingsland Road where lunch was taken at the Geffrye Museum.
With most still in tow, we headed south and the wonderful Elephant & Castle death trap where Ann narrowly avoided becoming a cycling statistic.
Tea was at Simon's 1920's semi in Streatham.
Thanks Simon, a truely different experience, if you know what I mean......

Unseasonably mild (+13) but overcast.
50ish miles with speeds around 14mph, traffic allowing.
Posted by Tartan Socks(long) at 13:19 No comments:

And gentlepersons in England now abed shall think themselves accursed they were not here.... In other words, apologies, clearly I’m no forecaster!

It was breezy, make that, very breezy, but not a drop of rain fell. With Ed on his sickbed, Irene and I stepped forward to fill the breach. Only Keith ignored my hint and showed up at North Cheam. After a brief delay (discussions with a potential new rider), we set off through Worcester Park and Malden Manor and under the A3 to Tolworth. From the Dittons, we rode on past the sewage works and over the Mole and Ember (very high) to Hersham, Walton and Weybridge. There were nine for breakfast (Bob, Dave W, Don, Irene, Pete, Ray, Simon). Only three followed Irene’s directissima through Ottershaw and Burrowhill, which meant that the Bee at Windlesham was reached at opening time (noon)! Here Pete departed for points north and west. What a discovery - a real local, all males seated at the bar, no modernisation and man-sized portions! Why haven’t we been here before?

By a majority of two to one, it was decided that tea would be at North’s of Staines. We crossed the A30 into Sunninghill before entering Windsor Great Park at Cheapside and thence via Tite Hill and Egham to tea. “Crevaison” yelled Simon near Laleham. When we examined the wheel, the valve fell out so I ruled that didn’t comply with the rules and therefore nul point. There was no stopping him and after providing only navigation assistance I was in my armchair by 1530 hours. And my back felt a whole better.
Posted by Anonymous at 14:59 No comments:

You'd be nit-picking if you considered the Run's Secretary shouldn't get lost leading a run but get lost we did somewhere south of Kingswood BR.
I was looking for a track/road/path or whatever that is clearly shown on the map (SCC & OS) to get across to Mugswell and junc 8 of the M25.
Bob and Mike were already at Morrisons (Reigate) when we arrived 20' down on schedule. A choice of 2 coffees (79p & 99p) doesn't lead me to think the place has gone up market as some would believe (Where are you, Ed?).
An unsheduled stop at Redhill Halfords allowed me to purchase a new 27" tyre for the rear as the inner tube was making an appearance and was giving cause for concern.
Steve, Jake, Keith, Pete, Daphne, Ian, Mike and briefly Mike M continued going east to South Nutfield then after going under the M25, a track taking us to the Outwood road.
At 12:50 I paused outside the Jolly Farmer (Horne) ready to throw the towel in as Tandridge was 20' further on.
No expense was spared for the puffers here in the construction of a large timbered building(open on three sides) with an assortment of stuff displayed including old destination indicator boards from a local BR. The TV showing Sky Sports seemed a bit OTT.
As we were leaving,the Veteran Cycle Club turned up on all sorts of mainly ancient machines (was that a Pederson?).
"Do the (oil filled) lamps work?" inquired Keith who himself was riding a 2007 Van Nicholas.
Some were even dressed in the appropriate clothing for the era: plus fours, tweed and flat caps was the norm. Sturmey Archer 3 speed hubs, rod brakes, Brooks saddle and Model T Ford black paint finish was all in evidence.
Pete's bike attracted attention as an "Allin" and someone even took a picture of it.
Around 15 riders young, old, men and women had ridden from Horley and this was their T stop.

A jolly woman called Fanny flushed Ian & myself of £3.00 for two 2 tea bags and a pint of hot water.
No wonder she's always happy.

A bright Winters day.
Posted by Tartan Socks(long) at 21:59 No comments: 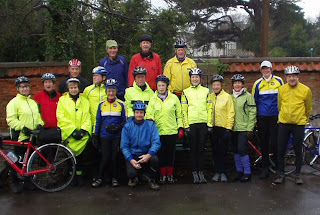 New Years day appeared amidst a slight blurr, a caped start seemed to indicate another wet day like Xmas day. Upon arriving at Ewell for the start a group of at least 18 people appeared, keen and wide awake ready to exchange New Years greetings. The rain eased off & we steadily rode in convoy at a very leisurely pace towards the cafe in Richmond Park. On the way Carole suffered the first puncture of the new year (puncture resistent tyres!) Ed fixed it and we all regrouped at coffee where another 8 people were waiting to greet us. On the return via cycle routes and minor roads Terry was puncture victim no 2. Simon, Jake, Bill & Pat joined us for a very pleasant afternoon of club pictures & food.
14 people submitted 2007 mileage totals which can be seen as they come in on the SWLDA blog site: http://cyclingswlondon.blogspot.com/