A charity ride (in part) for the Martlets' Hospice so you have to speak nicely to Simon.
Posted by Anonymous at 21:58 No comments:

A driving rain accounted for the roar as I crossed the Mole/Ember close to the Esher sewerage works. I recognised no one whilst at Tesco Brooklands so promptly returned. Home was reached in the dry(naturally!?)

and a line from our leader

"I dutifully rode to the meet at North Cheam this morning but no one else had turned up by 9.05.

As I was already fairly wet by now, having ridden from Walton, I abandoned the rest of the ride."
Posted by Anonymous at 14:01 No comments: 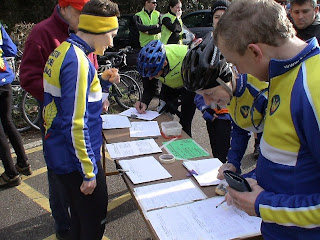 Ed and I need your help next Saturday (March 6) from 0900 till as late as you can stay. 70+ (1 CM, 1 MW) riders have signed up so far and if the weather's fine, hopefully there'll be a lot more on the day. Anyone used to handling money (possibly dirty) should apply. As neither of us has a car, drivers are especially welcome as we'd like to use the display thingie and/or Ed's pasting table. If you can pretend you know what's going on or just want to soak up the atmosphere, do come along. I recced the route very slowly last Wednesday, a wet feet jobbie especially where the Tilling Bourne had overflowed into Raikes Lane near A25. Surrey's highway engineers still havent located Longmore, Sheephouse and Hoe Lanes so the spirit of the ride is intact though hidden under several unavoidable pools of water. I've had printed routesheets/maps (B/W) and will produce laminated/coloured versions of same for display on the day. But if you want to make your own contribution (use up those old printer cartridges or whatever), please do so. Let me know if you can help (preferably this weekend as I'm for Stirling and back before Wednesday's dinner). Graham Hill 0208 549 0366
Posted by Pete at 06:56 No comments: 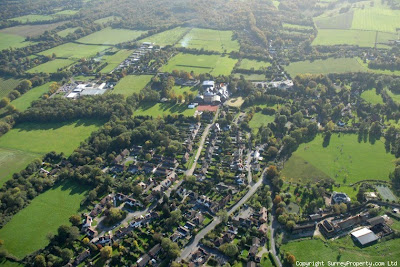 Due to a busted valve and change of inner tube, I did not reach the start till 9:20.
I was suprised to find, Steve, Anne, Richard & Tim still waiting.
We set off fairly briskly for a drizzle soaked ride to West Horsley, via Cobham.
Jake turned up at elevenses, where we kept a weather eye open to decide which route to Guildford. (Direct 5 miles, or over the Hill about 11 miles).
We decided for the Hill, up Shere Road, via Albury & Shalford. The Keystone was deserted when we arrived, but as they only provide full roast dinners on Sundays we decide to head for Wetherspoons. The heavens opened while we had our lunch, but the weather was good for the ride home. Group decision was to skip tea at Wisley and head straight home via Hungry Hill route.
Keith 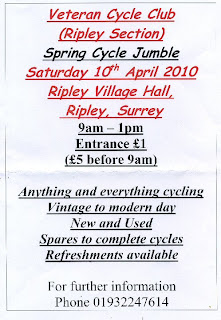 As Richard hasn't posted anything this is a brief note to say you didnt miss much. This winter lingers on so it was another cold dank miserable day.

There was much evidence of the Evans' rides as I pedalled towards Horsley and a sprinkling of snow on the top of the Downs. At Shere they were already there; they being Bob, David, Richard, Ed, Jake, and Ray (the last three opting to go no further).

Going up the hill we passed the William Bray(who? ex Prince of Wales) and then it was down and up to Farley Green where Richard decided that Winterfold merited a visit. Naturally when we reached the Bricklayers in Shamley Green Bob was here to greet us. And there it ended as all had our own agendas.
Posted by Anonymous at 09:37 No comments:

In addition to the information on the SW London DA website, the new savethectc website is now up and running. Click on the link in the previous sentence, then click on each of the tabs.

The web address is:

http://www.savethectc.org.uk
Posted by Jeff at 12:52 No comments:

On National Cycle Network Route N21, in the shadow of the radar control tower at Gatwick Airport 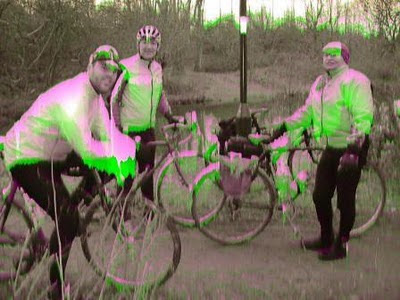 Leader Mike, Andy and Simon proudly sporting the new C&M colours.
(Report from Mike to follow)
Posted by Jeff at 13:15 No comments:

Apologies for the delay in posting but I've been away in the Highlands more precisely Raasay.
Posted by Anonymous at 20:56 No comments:

Future of the CTC
DANGER
Dear All

How aware are you of the proposal of the CTC head office to change the constitution of the CTC from a Membership organisation and convert it into a full blown charitable trust?

Have the reports and proposals been circulated to Member Groups to consider and discuss? The network is there across the whole country, but has not yet been used.

Have you looked at the debate on the CTC Forum? It is red hot! There is also a link to the full Forum debate on the savethectc page

Do you understand what this means for you as a member?

How aware are you of the vituperative debate that has been raging about what this would mean for members?

If you do, it is time for you to:
This fundamental change to the role, independence and future of the CTC as a member organisation will be voted on at the AGM, to be held on 15 May 2010. You know how many people attend AGMs. Did you attend the SWLondon AGM? A very small number of activists can decide the future of 62,000 members. We can anticipate a blitz of propaganda from the head office and some council members to promote their proposal. The Feb/March issue of Cycling carries for and against arguments from opposite sides of the debate (see pp 36-37).

Please consider for yourself the weight of the arguments for and against this momentous proposal , make up your own mind, and make sure that you vote. The future of the CTC as a membership organisation that represents YOUR interests depends on your vote.

Very many thanks for the huge amount of signatories for our petition to keep, at least for now, the contra-flow cycle lane on the bridge in King Charles Road. It helped us reach 207 signatories and it trumped the counter petition of the opposition. The Surbition Liaison Committee decided after lenghthy debate and comments to retain for 6 more months the cycle lane and then review it again after that.

Once again many thanks from the KCC and from myself as well. We have a Bread Pudding Challenge Ride on Sunday 14th February if you or any of your group are interested?
Kind Regards
John
Posted by Pete at 14:05 No comments:

I am a definite please for the easter tour to the Isle of Wight. I do not mind where we stay and i am happy to share a twin or triple room or a single room if that is all that is available. Whatever is easier and simpler to arrange. Please book me in and let me know as soon as money is required.
I would not be able to cycle there in one day at the speed of Ann and Steve but if anyone is interested in going Thursday to Arundle or littlehamton i would certainly like to join them please. Otherwise i will make my own way there.
The comment about Ryde being a binge drinkers paradise does not bother me if there is a reasonable prospect of a good beer somewhere which is not too noisy which i am sure would be the case
Sounds as if i missed the annual dinner, sorry but I have just returned from Patagonia!
My Thanks to Steve abd Ann for organising another Easter Tour.
Best wishes and Happy new year to all
Ian
Posted by Pete at 06:55 No comments:

Hi all.
I strongly recommend the Overstrand for Easter, you will not be disappointed.
The breakfasts were excellent, and the staff are very friendly.
And the local IOW brew was available too. Hic!
What more could you ask for.
Look forward to it.
Pete Beyer
Posted by Pete at 16:41 1 comment:

Thank you Steve for organizing a most enjoyable lunch and occasion thanks also to Simon for a splendid photographic display. Lisa Terry & I were intrigued to find that over the years the standard of C&M club riding has not changed as we were left behind on the run in to Horton and left to find our own way after Epsom Hill!
From Pete
Posted by Pete at 16:00 No comments:

Snow and ice on Walton Pond 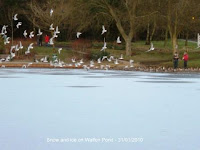 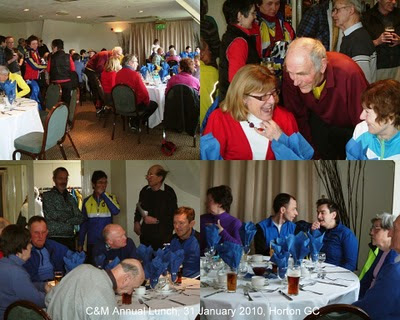 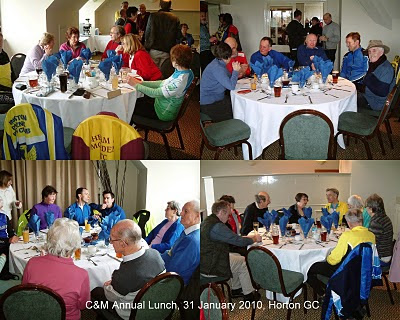 A date to remember - last day for tax returns and the annual gathering of the Cheam & Morden clan. Numbers swelled at the assembly point of Leatherhead Wetherspoons, before grouping outside for the ride to Horton GC. Is that Garden Centre or Golf Club?

The roads this year were clear of snow, though snow did fall on the descent to Leatherhead. After 150 yards, the group was split by traffic lights and never fully recovered. The MTBers soon got a head start by cycling up the steps to cross the M25, to reunite with the on-road cohort led by Steve. Then side roads, lanes and cycle paths to the outskirts of Epsom, where the elastic stretched again and more than one way led to Horton. Was that a reproachful glint I noticed in Pete's eye?

With some already in the warm, the Derby Suite soon filled. The bloodstock present ranged from thoroughbred to clapped out hack like me! Rarely do you see so many C&M together in one place. Then the start gate lifted and all set to to lunch and conversation, enjoyed by one and all. A vote of thanks was given to Steve for organising the event. We should also not forget the year-long effort put in by Andy as Runs Sec.to organise the weekly rides, without which there would be no Cheam & Morden! Thanks too to Andy's little band of helpers, who support him as ride leaders!

Well fed and watered, the group then prepared to go their separate ways, some lingering for the display of photos of past rides and snowy scenes, put up by Simon. Then home for an early shower, the distance inconsequential and the calorie statistics revealing an alarming excess of input over output. But then, it is just once a year, isn't it? 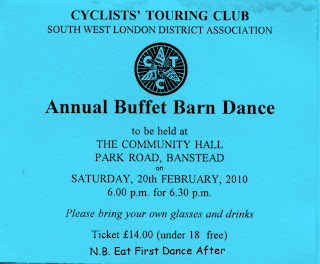 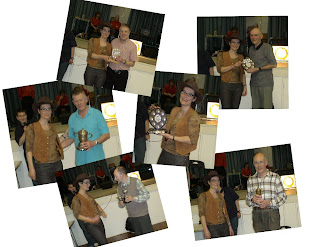 The DA Barn Dance and Prize Presentation 2010
Posted by Pete at 07:24 No comments: