One I took earlier 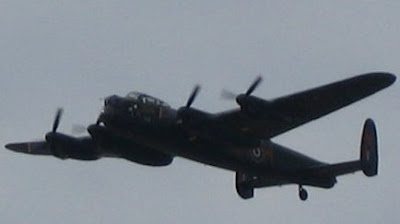 Whilst enjoying lunch at Ardingly the peace and quiet was interrupted by the music of four Rolls Royce Merlins when the Lancaster passed by very low en route to the Wings and Wheels Day at Dunsfold. 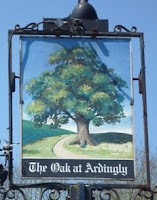 Ed led his platoon from North Cheam, while others plotted an independent path, but all routes led to Hookwood Tesco. Simon W escaped from work to put in a brief guest appearance and we were also introduced to Stewart (Stuart?) Downey. Refuelled with tea and baked beans, we were soon following Ed on quiet and pleasant farm roads to Copthorne, where we joined the B208 for the climb to Turner's Hill.

At this point, faced with two choices, we plumped for the B2110 towards Worth, before taking Back Lane and Paddockhurst Lane to head South on a long downhill to West Hill and the descent to Ardingly reservoir. With Daniel on fixed, his legs were pumping like red hot pistons and steam was coming out of his ears, until the inevitable climb from water level to Ardingly. With a choice of pubs, we favoured the 'Oak at Ardingly' with our custom - pleasant if a little pricey - with refreshing Hophead for some, rejuvenating Harveys for Pete B, but no draught cider for Terry.

After lunch in the sunshine, Ed spurned Cob Lane and headed briefly South before taking Burstow Hill Lane and Hanningdean Lane for the long haul up to Sharpthorne. Daniel had enough time to lubricate his chain before a quick right and left took us into Grinstead Lane for another long downhill to Weir Wood reservoir, followed by the unavoidable short, sharp shock to leave the water and the scientologists behind. Then down to Felbridge, where Richard was given his head to lead the unsuspecting flock to savour the mud and flint of Stubpond Lane. John Bellamy was the puncture casualty. One dissenter preferred the A22 to Newchapel, to await the group at Church Road, for the climb at Horne to Outwood. 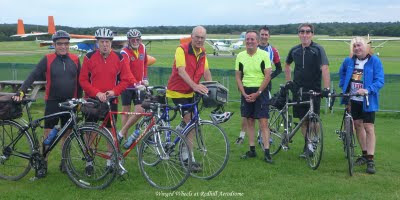 Believe it or not, dimwitted, bone-headed lexicographers (now known as 'asset development managers') of the Murdoch owned Collins dictionary have decided that the word 'aerodrome' is now extinct and will no longer be included! Will the aerodrome still be there? The anoraks say 'no', the signs say 'yes'. Terry's opening time intelligence was accurate, so it was tea and cake at the phantom Redhill Aerodrome.

After tea, still a little climb to cross the A25 to Merstham and Gatton Bottom, with a halt under the M25 to cape up . Then it was the climb past Fanny's, now closed, and the parting of the ways, in time for the rain to stop. My Cateye told me 58 miles, though all others will have done much more. Our thanks to leader Ed. 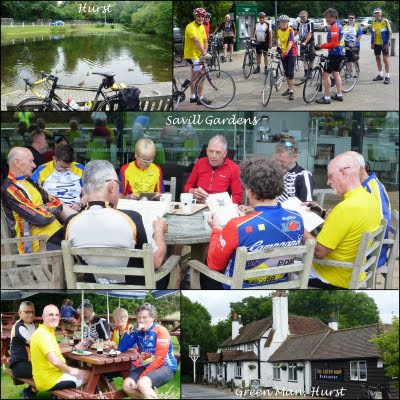 Just four were present for a meander through Thames Ditton, Walton and Addlestone then a brief semblence of countryside at Lyne before a return to (rather superior) surburbia in Virginia Water and the only hill, Callow Hill. We met the leader at Savill Gardens where numbers swelled to 11 at least temporarily. The ride along the Maidens Green, Nuptown, Moss End byways attracted a few spots of rain but six reach a less than crowded Green Man at Hurst well before one. Surprising (?) sandwiches though not on the menu were available and with 45 pence for orange squash there were few complaints. Back we went through Shurlock Row (Royal Oak re-opening though as what?) and onto Drift Road where your correspondent was in disgrace for dropping the leader! Passing through the park again, we exited down Tite Hill into Egham and Staines. After Shepperton Studios, a right down Sheepwalk brought us to the lock for afternoon sun and teas. About 70 miles door to door
Posted by Anonymous at 19:29 1 comment: 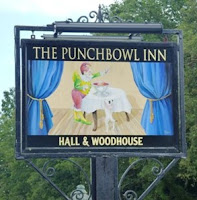 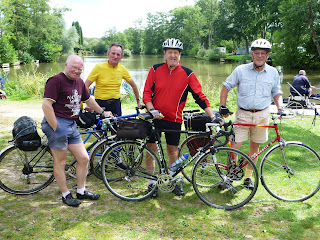 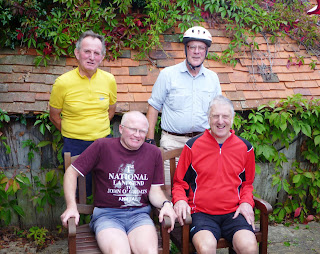 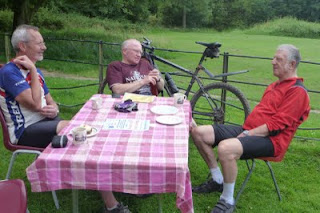 The planned ride to Wisborough Green was somewhat dislocated by the London - Surrey pre-olympic road race. Andy led Ed and Richard to spectate from the middle of the A24 near Dorking, while Peter and I chose to ride straight to Henfold for a leisurely breakfast. Very leisurely. By the time Andy's group arrived at the Lake, the appetite for Wisborough Green was clearly very blunted. Delay had been anticipated; however, discussion soon led to plan B (The Haven) morphing into plan C (Rudgwick) and finally plan D (Oakwoodhill). We therefore made our way via Weare Street to lunch at the Punchbowl, where Andy even bought a sandwich!

We lingered long over lunch before, on a majority vote, deciding to head for tea at North Holmwood. By the time we reached Mole Street, Richard the Dissenter had forked off to follow his own inclinations. The rest of us made our way to the church of St John the Evangelist, where we met that long-lost soul Keith taking tea and cake in the company of his mountain bike. Here, we soaked up the sunshine, before reluctantly setting course for home, or in Andy's case, for filial duties in Dorking.

The cyclometer recorded 45 miles, though calorie input very seriously exceeded calorie output. But who is counting? 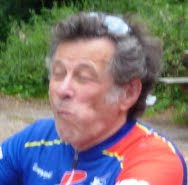 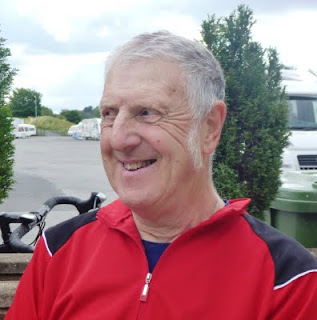 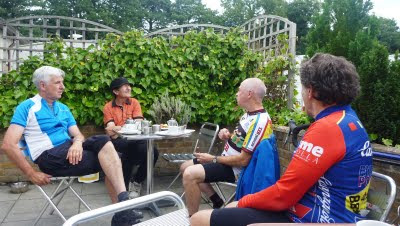 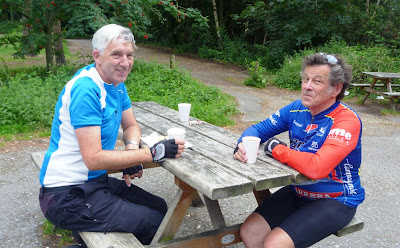 All that's left at Ockham Bites

There was only Ed for company at the start and soon we were overtaken by Bob's first of the month ride featuring Keith and Roger. I took my usual Hospitals route to Ashtead then Leatherhead station to the Mill Pond where grazed three roe deer seemingly unconcerned by our passing. After the Bookhams, Orestan Lane et al there was a parting of ways as Ed declined to continue at my pace along Green Dene. The fine weather had sprouted a fine crop of cyclists on what next Sunday morning will be closed roads.  I arrived at Jordans to find Bob, Brian and Peter but Dave already gone . Five minutes later the good companions were complete when Jeff then Ed put an appearance.


That was far enough for Bob and Ed so just four turned left at Gomshall Mill. I don't recall the last time we passed Farley Green's Roman Temple and south towards Run Common. After a brief but mercifully short ride on one of my least favourite roads (A281) it was time to introduce newcomers to the delights(?) of Brookwell Lane and sometime later Alldens Hill. The usually sandy lane wasn't but the hill saw the leaders slithering in a sea of mud at the bottom and all gasping on the steep section. Godalming was reached just on  one; excuse enough (plus Pete's "The Squirrel looks a bit pricey on the web") for the Jack Phillips.
After a sharp shower, we took a left after the old HQ to thread a way through the backstreets to Loseley, Guildford High Street and the A3 for cakes at Ockham Bites.  66 miles door to door.
Posted by Anonymous at 09:23 4 comments: 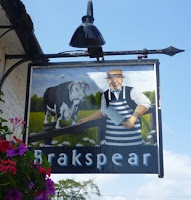 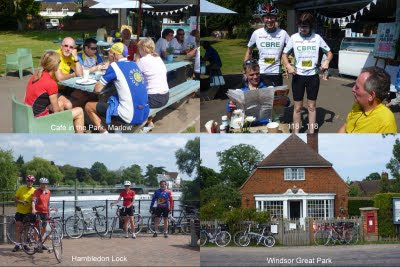 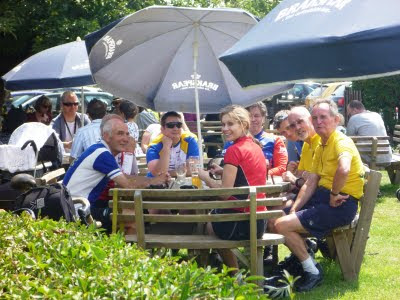 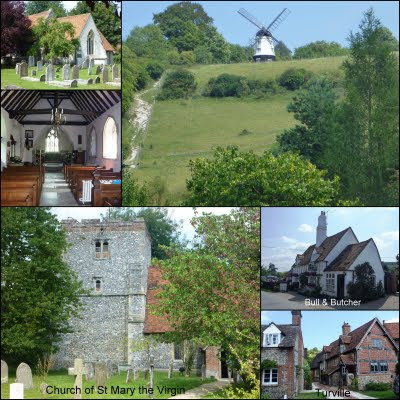 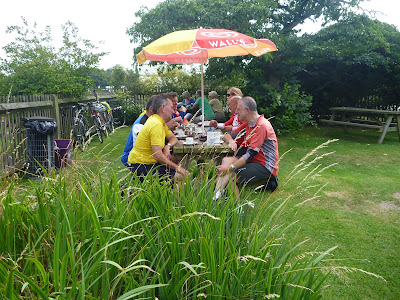 With an 8am start from Kingston Bridge, Dave led an excellent route at a good pace to arrive at 10.30am for 11's at the Café in the Park, Marlow. Lunch stop was picture postcard Turville and tea was taken at the Post Office in Windsor Great Park. The parting of the ways was somewhere between Chertsey and Shepperton. A good long ride in bright sunshine, with just over 101 miles on the clock.