C&M hasn't been on the Alton Line since 2015 so yesterday four "trainees" (GFH, Ann, Ray and Terry) were met at Bentley by Dave who'd ridden from home.

We travelled west then south to Binsted (no time for Monty) and Oakhanger where 11s was at the Chocolate Frog tea rooms. A closed road at Blackmoor caused few problems as we eased  past the southern outskirts of Bordon to Standford and over a nascent branch of the Wey South. 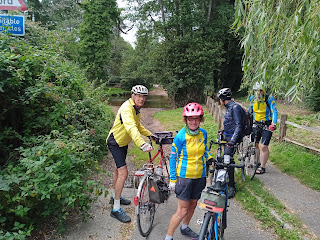 Around these parts the word Hill in several streetnames explains why the next three and half miles were an continuous uphill grind to Grayshott where lunch was the Village Cafe, a greasy spoon well suited to our needs. Here Dave left us for Haslemere.

For the survivors the next section (Hindhead to Elstead) was much appreciated as the route drops almost 750 feet. There remained one(?) more obstacle, Charles Hill, before tea could be taken at Tilford Village Shop. We  dispersed at Farnham station.

As for the Atlantic Wall it didn't featured. Apart from the author all were on smooths. 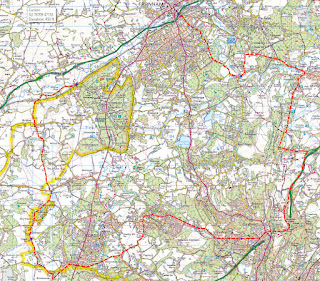 PS Apologies to Elliott - I'm off to Kings Lynn. We may be coming out of Covid but things aren't what they used to be (in 2019) so always check this blog for latest information.

Posted by RaasayWarden at 07:37 No comments:

Last week only buses ran on the Amberley line so no survey was possible. Hence my proposed trip to the seaside will have to wait a little longer.

The total distance is under 30 miles

Just back from measuring the miles under the watchful eye of men with guns. Definitely military but none had beards. A visit to the "Atlantic Wall" on Hankley Common could be one of:

Assume sandy miles are unrideable unless you have a gravel bike or better.

And before I forget there's nearly 2000 feet of climbing.

Posted by RaasayWarden at 11:23 No comments: 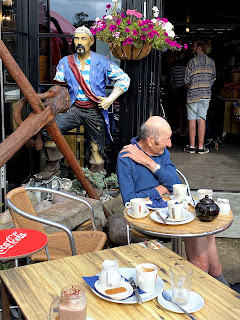 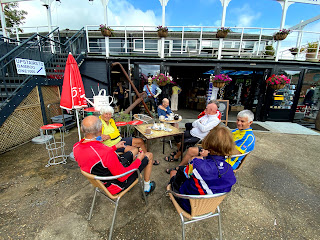 Pam, Ann, Graham, Bob, Simon, Tony, Terry and I met for elevenses at Nauticalia, Shepperton.  Choices were somewhat limited by a lack of bacon, but we managed to compromise!  Terry and Bob wisely went their own ways while the rest of us pursued a somewhat quirky itinerary to lunch, taking in the remains of a disused ford at Shepperton, Europe's largest women's prison at Ashford, and the impressive causeway between the two Staines reservoirs, beloved of twitchers, but today bereft of them!  There weren't many birds to spot anyway, but plenty of activity visible at Heathrow.  The gate to exit the causeway on the west side is not bike-friendly, but we managed by team effort, continuing then to Stanwell Moor and close to Horton to reach The Perseverance at Wraysbury. 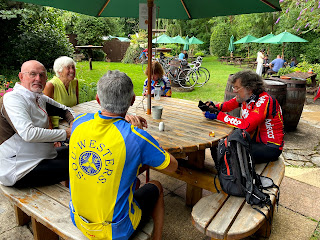 This is a terrific pub with really friendly staff and a lovely garden.   The one drawback is that Sunday lunch choices are a bit limited.  Unfortunately, it was only me, who wasn't eating, who noticed the availability of child's roast meals at £6.95.   Never mind, home-made minestrone soup and  somewhat larger bowls of chips kept people happy! 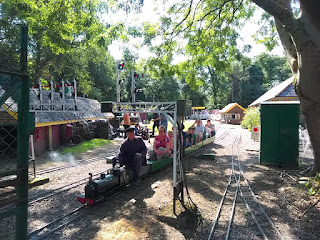 Unfortunately, it came on to rain as we were about to leave, but it soon stopped and gradually grew sunnier and warmer as we headed via Staines Bridge and Thorpe for a long-overdue tea stop at Great Cockcrow railway (photo courtesy of Simon).   Fortunately, the railway and tea shop still just the same as on our last visit two years ago - except that they now take card payments!    Thanks all for your company.

Although many of our number were away on holiday, we still managed to muster six members (Tony, Graham, Keith, Bob, Brian B and me) at our meeting point for the day at Squires Garden Centre, Stoke d'Abernon.   This must have been our first visit there as a group in 18 months!    It was raining while we were having our elevenses but had miraculously brightened up by setting off time.   Tony had devised a route to Woking, but had to return home before lunch.   Bob didn't join us for the ride and  Keith eventually went off his own way, leaving Graham, Brian and I to continue to Woking.

Our lunch stop was at the The Herbert Wells.   Again, it is so long since we visited this old favourite haunt that we were flummoxed to find no trace remaining of the railings to which we used to lock our bikes!  Brian set off straight away for home, while Graham and I installed ourselves outside the pub.   Being a Wetherspoons app user, I didn't even have to walk to the bar!    Lunch over, it was a straight ride home, Graham leaving me at Walton Bridge.   Thanks all for your company.

Due to the Melton Mowbray trip, a few of the regulars will be away this weekend and numbers obviously depleted, especially as lunch was planned for moss End.

Therefore I have changed 11's to Squires at Stoke D'Abernon, the lunch venue will be decided on the day.

I recently email highways England re the bridge and have just had this reply.

Dear Mr Hopkins
Thank you for your email on 6 August 2021 regarding Old Slade Lane bridge.

I can confirm Old Slade Lane bridge in Langley is now open to pedestrians.
Thank you once again for your email. If you have any further queries or require any information, please contact us on the details below or visit the Highways England website.
Kind regards

Due to recent rain I postponed a survey of Amberley and other points south and instead choose to head northwest. The good news the bridge has reopened and has been resurfaced (mostly). The barrier nearest to the industrial estate is still padlocked. Many feet have trampled a path on the the left hand (west) side of the barrier so no obstacle at all!

Word of warning: don't try the bridleway that starts opposite the A4 cafe and continues beside the Colne unless you're a fan of ferocious nettles, brambles and a fallen tree which hasn't moved for at least 460 days.

Posted by RaasayWarden at 06:45 No comments:

Ockley Church (new) !st Sunday of each month - but no end date quoted. 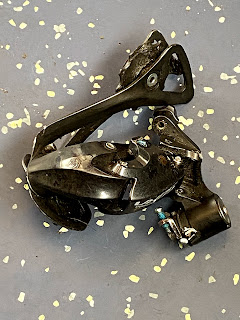 A wet start and not the best of mornings, but the Cheam and Morden are made of sterner stuff than another local cycling club (not worth their salts, if you see what I mean) who apparently cancelled their ride because of the weather.   These flighty thoroughbreds!   Admittedly, we did have a few apologies but Mark, Pam and Graham still joined me for elevenses at Fairoaks.   It was dry when we arrived so the outside seating was preferred, but the rain soon set in again and we retreated inside to save my sausage, egg and chips from getting too soggy!

The worst of the rain was over by the time we were ready to set off, although the weather was hardly cheery!   I was rather looking forward to trying my ingenious (I think) route to Windlesham, which after the backwaters of Woking and Hook Heath, would have taken us to Brookwood, then to Bisley and West End using a few roads and paths new to me.   However, the fickle finger of fate had other plans for me and, for reasons unknown, my rear mech suddenly plunged into my rear wheel during a gear change, and was wrecked.  Fortunately, the wheel was intact.

There was only one solution.   I saw it done about 1988, and I have always remembered it lest I should ever have the need!   The trick is to remove the derailleur, then break and shorten the chain with the aim of it running on one cog only of the cassette.   With help from the others we pulled it off.   My Wolftooth missing link pliers weren't of any use in breaking the chain, but the chain tool on my Topeak multi-tool did the job in breaking, shortening and refixing the chain (just as well I had realised much earlier that the Topeak tool needs a separate hex key to operate it - there is one of the right size built into the tool, but it can't be removed to work the built-in chain tool - design fault or what).

It all seemed to take ages, but actually it didn't take all that long.   I would describe it as a get you to the nearest station fix, rather than get you home.  To make it work properly, you really need old-style dropouts with a bit of adjustment in them, otherwise it's difficult to get enough tension in the chain and it jumps about, gradually working its way onto the smallest cog then off!

Anyway, the others kindly rode with me towards the nearest train and I got home without too much trouble, although I won't be looking to repeat this experience if I can avoid it!

Graham, Pam and Mark took to the towpath after leaving me and eventually found some lunch, although not as planned.  Thanks to them for their company and their help, and we'll try my route again another time!

For Bob and Maureen this was far enough. The rest crossed over into trees and the first stop was the Pete Mitchell bench(in use). The trackbed of the long vanished Horton Estate Light Railway led us finally to tarmac in Rollesby Road. Beside the Bonesgate Stream we reached the Kingston Road A240 where traffic was stationary just as it had been more than an hour before! Seeking an escape a procession of at least 20 mourners (cars) trailed us on the short rise to Old Malden. Here they turned left as we went right and down into Worcester Park and first left after the station. After the edge of Morden Cemetery came more suburban roads on the way to Raynes Park. C31 (and its continuation) delivered us to Elm Road and home.

Here Irene and I stopped to pick up supplies (largely unneeded); the others were sent on ahead to Richmond Park. Just inside the park they discovered the toilet card machine out of commission and two fallen logs which were to serve as the forum for the AGM. 13 miles

Our ride on Sunday 8 August 2021 will now start from the Hanger Cafe, Fairoaks Airfield, Chobham, lunch stop to be confirmed, but Windlesham is a distinct possibility.

The planned ride to the London area will now take place in October with slightly changed arrangements.