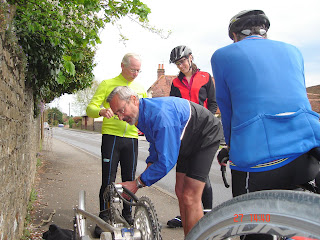 What a difference a day makes, Saturday was the warmest day so far this year, today has dawned overcast but fairly mild.
My turn at the front and a train assisted to Guildford from Epsom - a new Sunday service this winter from SWT.
Arriving late, I found Ed, Ian, Geoff and new member Rachel already on the platform.
Fare - £4.60 rtn with Network Card.
33 minutes later we disembarked, to be joined by Graham via Surbiton and shortly we were out of the town and on the cycle path to Shalford, Farncombe and the boathouse for 11's (coffee - £1.80).
Bob was already inside and later Terry and Keith turned up boosting numbers to 9 - amongst the best attended TA rides in memory.
Leaving Bob I chose a fairly direct route toward Tuesley, Enton Green and the track going west under the railway to join the A283.
It was by now raining intermittently but not cold.
I decided to "try" the track going beside Thursley lake leaving the majority to brave the A3 rejoining the group outside the Three Horseshoes PH in Thursley village.
It was just a short hop to lunch at Churt only to find no food available, so a local convenience store was raided to satisfy those sans lunch.
14:00 and we're off............... to be halted outside The Woolpack in Elstead so Keith could attend to a puncture...... or two!
Richard D "appeared" having been following but unable to catch us.
As he headed toward Newlands we continued across to Hurtmore and tea at Watts Gallery in Compton.
A fine establishment populated by hungry day trippers, rather than visitors to the gallery itself, celebrating the the life and work of G.F Watts (1817-1904).
Opened on 1st April 1904, two months before his death, it is one of the few purpose-built picture galleries in the UK housing a single professional artist's collection.
It was free entry up until 31st March this year when a £3 charge was imposed. The gallery will close in August 2008 for two years whilst essential conservation work is carried out. On reopening a £5 charge will apply.
The gallery has, controversially, decided to sell two non-core paintings in order to secure long term care of it's collection.
With Keith, Geoff, Terry and Rachel riding home it just left the climb to the A3/A31 junc and the trackway where we paused to enjoy the view in bright sunshine.


A post note to the puncture story:
Since last week, I purchased 5 new Nutrak tubes from cyclesense.co.uk (£10 for 5).
Fitted one Sat am and the tyre stayed inflated all day and all night.
Sun am removed bike from garage (still inflated) rode 100yds to station................... THE TYRE WENT FLAT IMMEDIATELY!
I have posted on bikeradar.com for help, in the meantime I will continue to ascertain what the problem is.
The pic is of Keith's puncture.

www.anothercyclingforum.com/index.php?topic=50168.0
Posted by Anonymous at 14:50 No comments:

After a dull and misty start, the warmth of the sun and the masses of bluebells were sure signs that spring was in the air. There were but eight at Beare Green; three from Cheam, the rest by divers ways and means (Andy by train to Dorking - punctures (allegedly)). Leaving Bob behind, we (Keith, Andy, Ed, Geoff, Graham, Terry and Tony) headed through Capel and along Friday Street and then down past the landfill into Horsham. Christ's Hospital was soon in view and after initial confusion, the George And Dragon at Dragons Green was located - a target which had been in doubt at 11s. That we were there just after one was testament of a strong tailwind with speeds in the high teens common. Cooked meals only was the house rule so most went hungry after rejecting the alternative, "cheesy chips". A pint of watery Ribena cost 30p encouraging even youknowwho to dip into his pockets. After a quick sprint along the A272, we turned north through Southwater "new town" and into the centre of Horsham. The outward route was then followed back to Capel, but using Old Holbrook instead of the landfill climb. After a cakey interlude, we left Ed to fix a puncture at the church and went our various ways - 75+ miles for me.

A wee bit late - for details click here
Posted by Anonymous at 15:42 No comments: 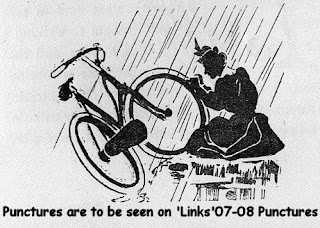 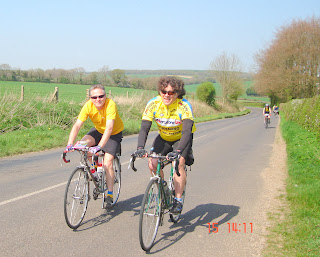 April showers and punctures sums up a bad day in the saddle...... .....one to be forgotten.
Six of us: Ed, Jake, Keith, Ian, Tony and myself at KB. The route: Hampton, Lower Feltham, East Bedfont, Stanwell and the cycle route under junc 14 of the M25 just before Poyle where Keith punctured. We were quickly on our way through a thunderous shower toward Colnbrook then due north to Black Park for 11's.
A busy place next to a large lake popular with families (mug of coffee - £1).
We left Bob and Ian but picked up Pete M, riding through delightful Fulmer and the lane parallel with the M40 to just south of Beaconsfield where we headed south to the Blackwood Arms at Littleworth Common.
Around 20 members of the Chiltern section of the VCC were enjoying a drink as we arrived and personally I found these ancient bicycles fascinating to look at. No two bikes were the same and included the names Humber, Sunbeam and Rudge.
The oldest bike, from 1896 was a special collapsible Rudge with cotter pins at the frame joints......... no brazed lug work here. The thought being it could be dismantled when travelling on the train.
Leaving the pub, we rode through Burnham, Dorney, Eton, Windsor to the open air tea bar at Runnymede.
The patches of blue sky were quickly being filled with rain clouds so inevitably the remainder of the ride was wet.
When I punctured at Chertsey, I sent the others on and happily replaced the tube and set off...... ........alone (a BIG mistake).
Moments later in Shepperton I punctured again so without a replacement tube proceeded to patch the hole.... ......in drizzle.
On nearing Esher the tyre deflated again and I was by now cold,wet and experincing the early stages of the "bonk".
I decided to pump up the tyre and see how far I could get.
Riding through Claygate I felt terrible and became extremely weak barely able to turn the pedals. I stopped to pump up the tyre but had no energy to carry out this simple task. Looking in my saddlebag I found a packet of crisps which I devoured. I considered getting the train home but that seemed a long way (via Clapham Junc).
When I got to Hook - finding the tyre had deflated again - I continued to ride on the rim anxious to get home and end this ordeal.
Still suffering from low blood sugar, I bought a Mars bar and sat down to contemplate what to do next.
I decided to walk home but the tube by now was out of the tyre and was preventing the wheel from turning.
I began to feel the Mars bar working and immediately started to mend the puncture in bright sunshine.
When I got to Ewell I couldn't believe that I had punctured again and stopped at a garage to buy a pizza for supper.
With half a mile to go, I gingerly rode on the pavement, on the rim and arrived home totally exhausted.
I retired to bed at 8:30pm.

Rarely have I felt so helpless, inadequate and fed up whilst on my bike.

This morning I have mended two punctures and can confirm all four were in different places caused by foreign objects or pinching tube when replacing.

The photo is of happier times, last April actually. 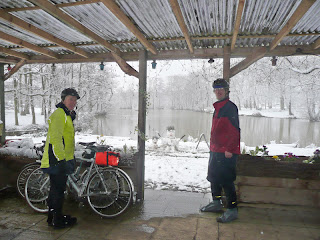 Martin from the West Kent CTC writes"Sorry not to see anybody from Cheam and Morden or Downlanders today".
He sent me some photos to prove he made 11's.

16/03/08
Steve's ride to Betchworth via Shere was a damp squib to say the least.
Simon and Jake chickened out at 11's which left SG,Keith,Ian and myself for the 2 hour? ride in awful conditions to the Dolphin.
A rare departure from the norm led me inside where an open fire and soup managed to lift my spirits..........until the ascent of Pebblecombe hill!!
Posted by Tartan Socks(long) at 01:47 No comments: