I have been in shock all week: firstly our esteemed councillor does not know who Ken Joy of Medway Wheelers was (shurely some mistake?) , and secondly Wester Ross was admitted for emergency bottom bracket surgery and will be out of action for weeks. Thus it was with some relief that I set out on a sunny but cool day to join Ed, Andrew, Janice, John M, and Richard at North Cheam. The latter's attendance proved fleeting thanks to chain and puncture problems before Tadworth.

Clearly Ed had sprinkled something extra on his cornflakes as at fair pace we sped up Chalk Lane and through Walton On The Hill (sightings of heron and Crystal) to Pebblecombe and thence via The Fox Revived to Tesco Hookwood where we joined Andy, Bob, Ian, Petes B and F and Terry over a drink or two. Andrew, Bob and Janice now exited. The rest sampled Charlwood, the "Zoo" road, and Lambs Green before tackling the final climb to The Dragon, Colgate. During a protacted lunch, Ian was seen buying off the barman after being caught redhanded with firstly cheese and secondly roll in hand. At my suggestion we added Wimlands Lane to the return but still reached Capel well before three o'clock. John and the Petes went for an early bath whilst the rump headed for the cakes (3 if I'm being honest).
Warm when the sun was out; autumnal when it wasn't - about 65 miles.
Posted by Anonymous at 20:27 No comments: 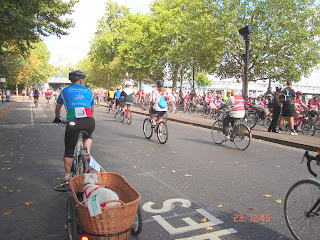 Ken's triumphed again on a brilliant day in the capital with 38,000 cyclists competing in a slow bike race around the capital.
Simon took the reins as far as 11's at Butlers Wharf then joining the route at London Bridge,we rode along closed roads with thousands of Londoners enjoying a (very)leisurely cycle on a 9 mile route.
The course and public areas coped well with the large volume of novice riders with only short waits at pedestrian crossing and route convergence points.
The largest bike park London has ever seen was the compulsory area to leave your bike,whilst visiting the "Bike Festival" that consisted of a dozen interested parties.
I noticed considerably more interest in the LCC than the CTC probably on account of the free T-shirt on joining(a good marketing ploy?).
Following meeting up with my sister and 11yr old Hannah,who had travelled up from the coast,we followed the signed route back to Clapham .The remaining C & M members taking tea at the Italian cafe on the Common.

Jenny Jones(Ken's Green Advisor) has plans for additional road closures next year "to cope with demand" but where were the press photos on Monday?

Bargain of the Week:Boss S1200 Rigid Workstand £42.00 delivered(ribblecycles.co.uk)
Posted by Tartan Socks(long) at 22:20 No comments: 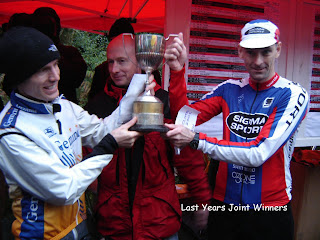 Our Councilor at Tour of Britain 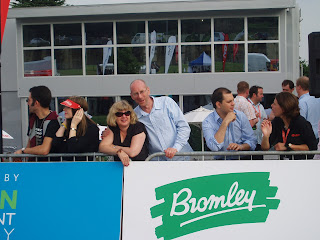 Rather belatedly but better late than never, as an interloper to the C&M Sunday ride on 9 Sept, I spotted Simon with his charming wife slumming it in the VIP Hospitality suit while the earthling riders, Andy Coxhill, Graham Hill, Ed Sharpe and others, pushed and shoved to get a view of the Prologue from the spectators side. There was a veiled promise of Champagne for the troops but sadly it never came. We had to console ourselves with a Hero "T" shirt from the CTC tent and the odd orange polka dot flower pot hat from Eon but it was worth it for a British win.
Posted by mike morley at 21:01 No comments:

Readers may spot similarities with the 26/8 ride (the teastops, for instance) so new roads had to be sought. At North Cheam regulars were joined by newcomer, Rob, on MTB with panniers. The route was familiar: Epsom, Leatherhead, the Bookhams (surveillance zone), Orestan Lane to West Horsley. We were ten minutes early! In time numbers swelled until we were 13 (Graham, Andy, Daphne, Don, Ed, Irene, John M, Keith, Pam, Pete C, Pete Matthews, Rob, Terry).

Past Sheepleas to Coombe Bottom, Shere, Farley Green, Run Common and Thorncombe Street and into Godalming was the route. But after our rapid start, why didn't we reach Hurtmore? Well a combination of factors, and being discreet I'll mention no names. Firstly another summery day meant longwinded elevenses. When finally we left, Pam, Pete M, Rob and Terry stayed on to enjoy the sunshine. Then A and B turned back thinking that C was behind - not so and 20 minutes were lost. Finally D and E footed the climb out of Thorncombe Street towards Munstead. So it was Jack Phillips for four including Keith who got his money back but no meal due to staff shortages. Meanwhile the BYO mob picknicked in the courtyard.

There were no votes for Newlands, so the route back took in Farncombe, Loseley and Guildford town centre before heading along the A3 to Ripley. Back roads lead to Ockham (exit from the surveillance zone), and Downside and across the Tilt to a new venue, the Ivy Tea Rooms at the Old Plough, Stoke D'Abernon. Outstanding hours but how will this outdoor venue survive in winter? About 65 miles.
Posted by Anonymous at 16:56 No comments:

Is now invited to be a blogger on the C&M and accepts the kind invitation. Whatch out! there's a new blogger about.
Posted by mike morley at 16:06 No comments: 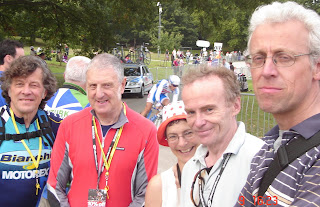 Robert Garbutt writing his editorial in this week's Cycling Weekly is less than enthusiastic about last Sunday's opening prologue of the Tour of Britain. His main bone of contention was the lack of any big screen, poor timing information and general "amateurish"feel to the whole event.
Apparently, the electronic timing required an operative who failed to materialise so the organisers were left to a manual system.
In any case, Graham, Ed, Keith & myself enjoyed an double 11's at the Parador cafe, Crystal Palace waiting for things to get started on the course.
We saw Malcolm Elliot triumph in the preceding event with plenty of choice for viewing (we chose 50m from the finish line).
The main event was a pretty lacklustre affair it has to be said, even the free e-on hats were being refused by the box full (I had 4 thrust into my hand by staff keen to get rid of them).
C&M members seen on the course gaining one point?-Mick Morley, Andrew H, Crystal, Pete & Daphne.
TV coverage is provided on both the BBC & B. Eurosport from 16/09/07.
Posted by Tartan Socks(long) at 18:33 No comments:

http://www.tourofbritain.com/therace_stage_pages/therace_index.asp
Info for the Tour of Britain on this site
Posted by Pete at 06:43 No comments: 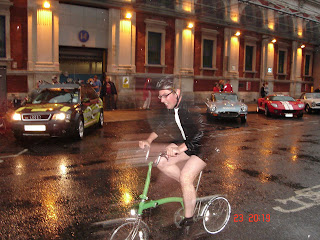 Apparently Pete B tried phoning me last night in order to find out my route to Shere, just as well I was unavailable because I was making it up as I went along-first climbing to Headley then harder than expected Ranmore arriving to find Graham, Terry, Pete B, Frank plus wife in The Lucky Duck.
Another "endless coffee" & flushed of £1.80 we were away climbing up past the council workers responding to fillthathole.org.uk and a steady 14mph? ensued as I felt good on the bike and everybody appeared to be keeping up.
Just after Cranleigh Ed made some comment about my speed and him being over 70 which I ignored and just before 1pm we rolled into Wisborough Green.
Some chose the Cricketers PH, the rest a public bench overlooking the green.
After a take-away coffee from Penelope's, we assembled (Graham, Simon, Don, Ed, Pete B, Terry, Keith, Roger and myself) for the return.
"What's the hurry" says Keith as we paused to survey damage caused by low flying metal. Well as it turned out, Holmwood was open and welcoming, a good substitute for Capel.

The picture shows a sodden Brompton rider in the Smithfield Nocturne.
Posted by Tartan Socks(long) at 03:10 No comments: