10.30 at the cafe in Richmond park for a Southwest London CTC social new years day coffee and chat. 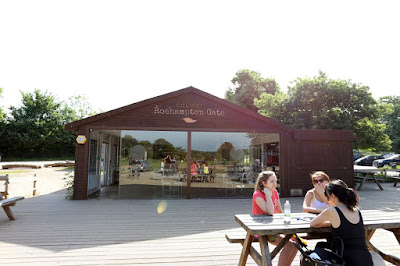 Member Mileages 2018
Old hands will know that, at this time of year, we request members to submit their mileage record for the past 12 months: that is, from Jan 1st to 31 Dec 2018. We keep a running total on the MWW blog under the tab 'mileage'. Perhaps you have never noticed it.

It is of individual (and sometimes sobering) interest to see one's annual and cumulative mileage and it is of value to the Group to be able to report how many miles our members have ridden.

Please therefore take the trouble to remind yourself to take note of your annual mileage for 2018 before the witching hour of 59.59.23 on 31 December and then to send it to me by whatever communication method you feel most comfortable with. Apologies to W. Churchill for ending that sentence with a preposition, up with which he would not put. Pigeon post most welcome.

Otherwise, a grubby piece of paper will suffice, if identifiable.

For the male and female member (those are at present the only categories that we recognise), who clocks up the greatest annual mileage, your achievement will be recognised at our annual lunch. There will also be recognition for the member who has cycled more miles in 2018 than any other member.

Please note that entries will only be eligible for a prize from members who are regular riders with at least one section of the club.
Do not forget to write down the mileage on your Cateye, Garmin, Cyclometer or whatever BEFORE you reset it to zero for 2019.

I look forward to receiving your mileage, however modest. It is unlikely to be less than mine.
Happy New Year to all. 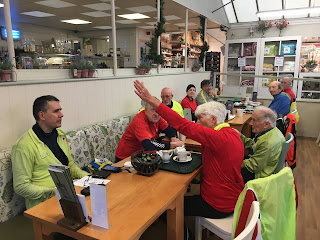 A damp and gloomy morning didn't deter no less than twelve of us from gathering at  Squires Garden Centre, Stoke d'Abernon.   This included Daniel, warmly welcomed back after quite a long absence, and Ray Wren.   Everyone except Maureen continued to lunch at Leatherhead, Bob and Ray beating the main group.   Well, I did improvise a rather circuitous tour of the back roads of Cobham, Oxshott and Leatherhead to ensure the group a good appetite for lunch.   Many opted for a manager's special turkey meal to keep up their protein intake!

There was no consensus after lunch and we all set off in different directions, fading into the gloom!
Despite the miserable weather and the short distance, it was an enjoyable ride in good company, so thanks to all.
Posted by David W at 17:24 No comments:

The day before Christmas eve and it dawned wet! I left home about 9.15 and the rain had stopped. About half way to Squires at Long Ditton I had to stop and take off my rain top as the weather was very mild. On arriving at Squires Dave was already tucking into a full English and Bob had also arrived. Slowly the throng arrived,Simon, Paul, Carolyn, Pam and then Ed, the days leader. 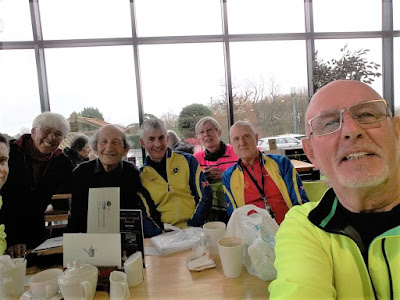 No rush today and we lingered at 11's only leaving around 11.30. A lovely route to Wetherspoons at Leatherhead with no rain. Very local knowledge from Ed saw us arrive in good time Dave had left us at 11,s and Carolyn left us at Leatherhead before lunch.

Again we lingered over an enjoyable lunch. On departure Ed and Simon headed towards Ewell while Pam, Paul and I headed for Cobham where Paul turned for home and I followed Pam along Seven Hills road towards Walton, we parted company at the mini roundabout near Whitelys village and I head for Molesey and Hampton stopping briefly at my Sons before heading home in the dark.

Although a dank and dismal day a good ride with cheery folk.

In celebration of the the winter solstice and and the approach of Christmas, I have taken the liberty to insert a new page in our attendance record to include attendances from October 2018. I'm sure that Lisa will forgive me.

I have referred to ride reports to identify attendances. Unfortunately, October 21 is an embarrassing vacuum, which C&M abhors. Any help in filling this vacuum will be most appreciated. Please also check the other dates to confirm that they are accurate. I would not want any dispute to be referred to the European Court of Justice - pre- or post-brexit. That might take a long time.

In the meantime, may I wish you all a Very Happy Christmas. 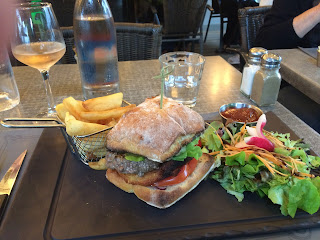 As The Edmund Tylney, Leatherhead appears on the rides list as the lunch venue for the rides on both Sunday 23 and 30 December, I may, on the day, suggest an alternative, local destination for my ride on 30 December.   This will be in light of the weather and the wishes of the group at elevenses (which remains unchanged at Squires, Stoke d'Abernon).    But I can't promise a cracking lunch like this one!
Posted by David W at 08:14 No comments:

Runnymede - Maidenhead - Home!!
An easy start for me!  Irene is visiting her sister this week so it was great to have her company on C + M ride.
Bob, Tony, Paul and Dave were in the National Trust Cafe when Irene and I arrived,  then Graham and Vic joined us. Bob and Dave went to 'where ever' and Vic had left the group by the time we reached Windsor. I thought it a good idea to see the Xmas decorations in Windsor Town; what a let down, there weren't any!
We crossed the river, stopping outside Watermans pub for a chat with Ged  who was on a reccie. Our route took us along the river to Dorney;  turning on to the path along side M4 motorway to Bray. Before reaching Maidenhead I took a right on to cycle route 52 taking us to the roundabout at Maidenhead bridge. On to the Thames Hotel just up on the left on the Cookham road.
Good to be in the warm with drinks and food ordered.  Somehow it wasn't quite as ordered but tasted good and no one complained!
Our route home was 'as norm'....along A4 (not the Jubilee river today), Dorney, Eton, Datchet to Horton, Wraysbury and Staines.
Tony had things to do at home so left us at Horton. I needed to call on pals in Staines; Irene went direct to Egham for her car.   Paul also decided to carry on - no tea at Notcutts today!!
Thank you for joining me.... Good company and an enjoyable day out.  Pam 😊👍
Posted by Tony at 15:23 No comments: 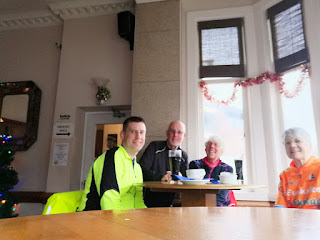 A lovely surprise that Irene joined us.
Posted by Tony at 12:59 No comments:

This coming Sunday, the 16th, the lunch venue will now be the Thames Hotel Maidenhead. 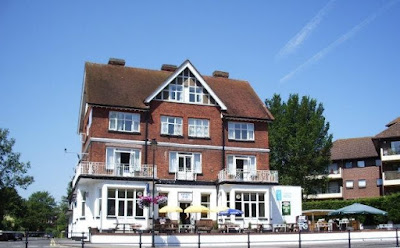 Fortunately the drizzle en route to The Vineries was not a bad omen - it was simply ensuring we would have a fine, sunny day. Leaving Ed, Graham and Bob there, I led Dave, Vic and Petes Beyer and Foster to Ranmore via Beech Avenue and Hogden Lane. We then cautiously descended roughish Ranmore Common Road before tunnelling under the A24 and taking the cycle track to Pixham Lane. Joining the A25 briefly we turned into quiet Punchbowl Lane then Tilehurst Lane. Here the eastish wind was much stronger than on Wayfarers' fwc day - I couldn't manage my previous best by some distance. For a change we then went up Root Hill and turned left into Brockhamhurst Road, followed by Gadbrook Road and Snower Hill. Wellers and Wheelers Lanes led to Brockham after I made a brief stop to save the cost of a 2nd class stamp.

Lunch at the Royal Oak was delicious and appeared quite quickly. The Petes had soup and would recommend it - but only one bowl. We chose to return via the muddyish Coach Road, along which Pete B found a bunch of keys - further on he found a keyless, very grateful family of four. We decided against a further stop - I arrived home just in time for 'Threes'. 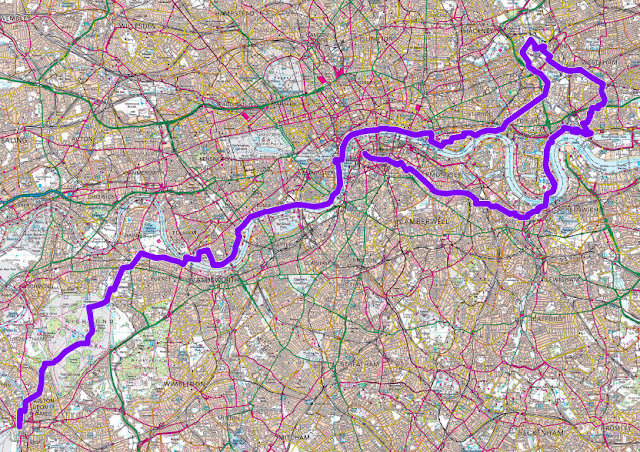 It's nearly four years since our last expedition to the East, a land largely built by Joseph Bazalgette - Chelsea and Victoria Embankments, the Northern Sewage Outfall and his "Cathedral of Sewage", Abbey Mills pumping station. This is also a gruesome tale of Primo, Secondus, Tertius and Quartus aka the Four P's.

Sunday was warm for December but almost rainless (heavy before and after but scarce during the ride). There were four at the start (G, Dave, Ed, Lillian). Primo (Ed) showed up after only two miles close to ex HMP Ham House (an ongoing addition to Berkeley’s empire).  We split with Dave volunteering to take the bad news to anyone (Pam and Tony) waiting at Barnes station where four became six.

The next unscheduled stop was the briefest of visits to The Rocket behind Putney Church. Then came Hurlingham and Chelsea Harbour where early West London derby fans were disgorging from Imperial Wharf station. There was nothing to record of our ride between Battersea and Waterloo Bridges save the absence of Terry but in truth I confused the undersides of Waterloo and Charing Cross Bridges! So now we were seven.

Fifteen minutes later we arrived at the Liberty Bounds, packed but service was still prompt. As we left Secondus (Pam slow) turned up.  Between St Katharine's Dock and the London Stadium was watery and as predicted nobody rode the cobbles at either Bow Lock or Three Mills Studios. Old Ford was a first chance to shorten the ride. We turned east onto the Greenway but to no avail as we met Tertius (Tony) as we descended to Marshgate Lane. This was one stop too many for Dave who headed home. We paused beside Abbey Mills pumping station before continuing on to Plaistow and Canning Town where Quartus (Tony again) put in a belated appearance.

It should be no surprise that lunch was taken after two at Fat Boy's Diner nestling between London’s only lighthouse until 1988 and Container City. Refreshed we headed through the Isle of Dogs where locals were showing off their latest balaclava/scooter collections. In Island Gardens is the Greenwich Foot Tunnel entrance; we walked. What happened next is unclear. Only Lillian and I reached Waterloo station by the intended route (Quietway 1, well worth checking out). Perchance we found Ed on the main concourse looking for a train. Just not my day? And sometime this week there will be a cleaning session.