Postscript to "The Chossy" building.


I recall Chossy saddle bags as a schoolboy ( C 1948-52) they were highly regarded and our headmaster recommended we had one.

The site of 168 East Street was granted planning permission for 9 units of housing earlier this month.  It has a large site with an entrance on to Dirdene Gardens.

I recall the owner, Mr. Osborne and can picture him with a 1950 Humber Hawk.

Posted by Tartan Socks(long) at 18:19 No comments:

Once again for completeness


After turning back the clocks, I set off for Hampton Court; no contact with street furniture this time! Relative to the start, Windsor Farm Shop offers few options - Dave choose Shepperton Studios and the Causeway (with the usual frisson of excitement when passing under the M25). If squirrels count, there were over twenty of us for 11s, and sixteen were keen for more.

After Datchet came a surprise. We headed northeast for a M4 close-up before turning north onto NCN 61 (new to me) through Langley. Then the compass swung round to northwest as we rode on through George Green and along the west side of Stoke Poges (no lowing herd or weary ploughman today).  Hedgerley was reached at the unusually early hour of 1220. For once The White Horse wasn't packed to the rafters so some even managed an inside seat though most had to settle for the tented garden.

We could have switched on automatic pilot for return bypassing Fulmer then heading down the long straight from Pinewood through Iver Heath to Colnbrook and Poyle. Not wanting to test lights on the first day of GMT, the majority headed home with the rump stopping for tea at Stanwell Moor. I was back before 1530; a modest 55 miles and one hill (where Janice unshipped, the rest not wanting dirty fingers rode on).
Posted by RaasayWarden at 21:31 No comments:


"dear oh dear I do remember these things being bee's and ee's for CTC wallah's
-one who is still around to this day riding in West London DA, but thankfully his boxer underpants (they weren't called that then) aren't on show nowadays. His used to hang out of the black cloth cycling shorts he wore, much to the amusement of very young girls, and the embarrassment of other riders nearby..."
Posted by Tartan Socks(long) at 20:19 No comments: 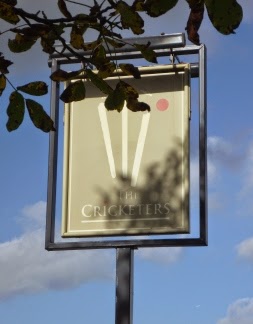 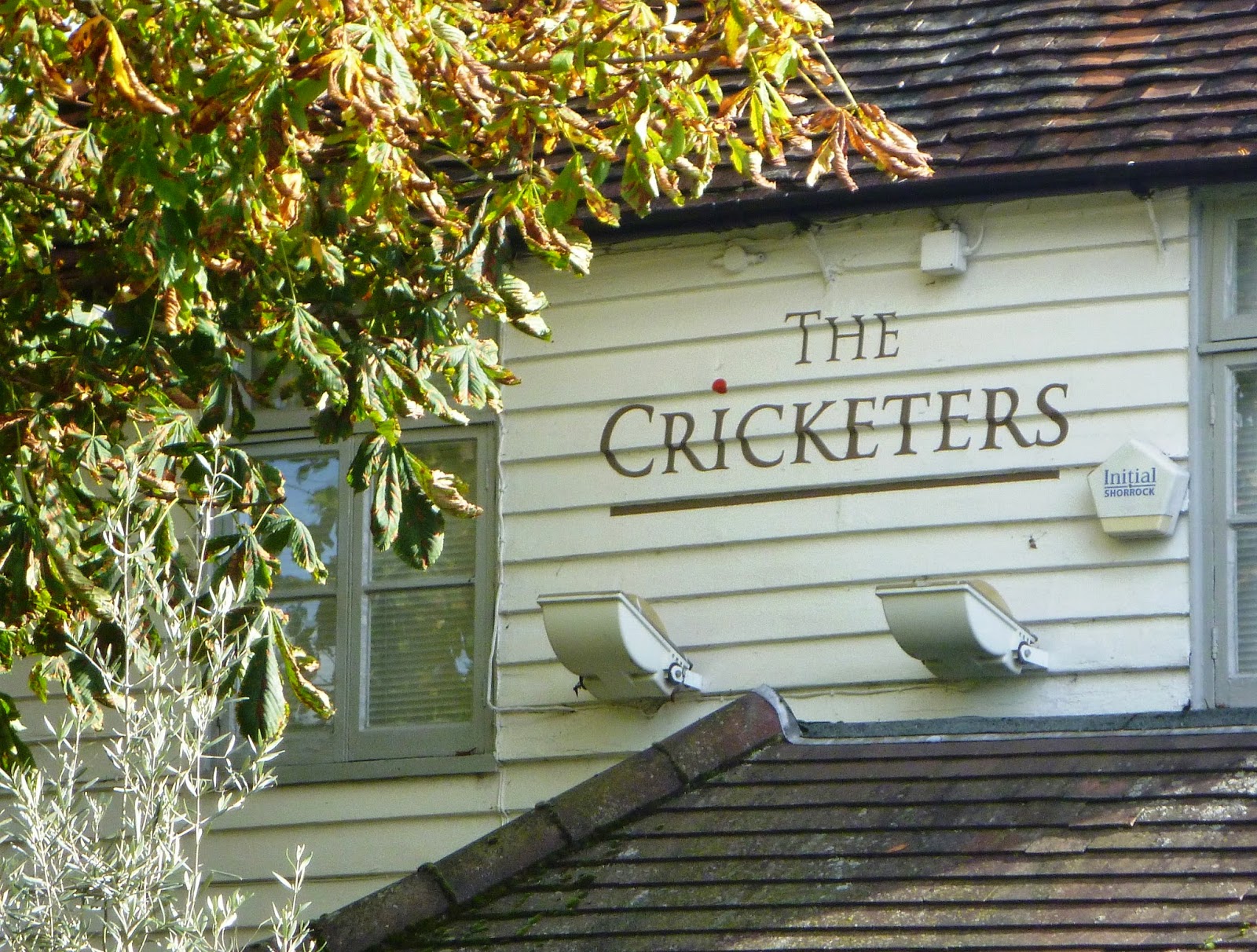 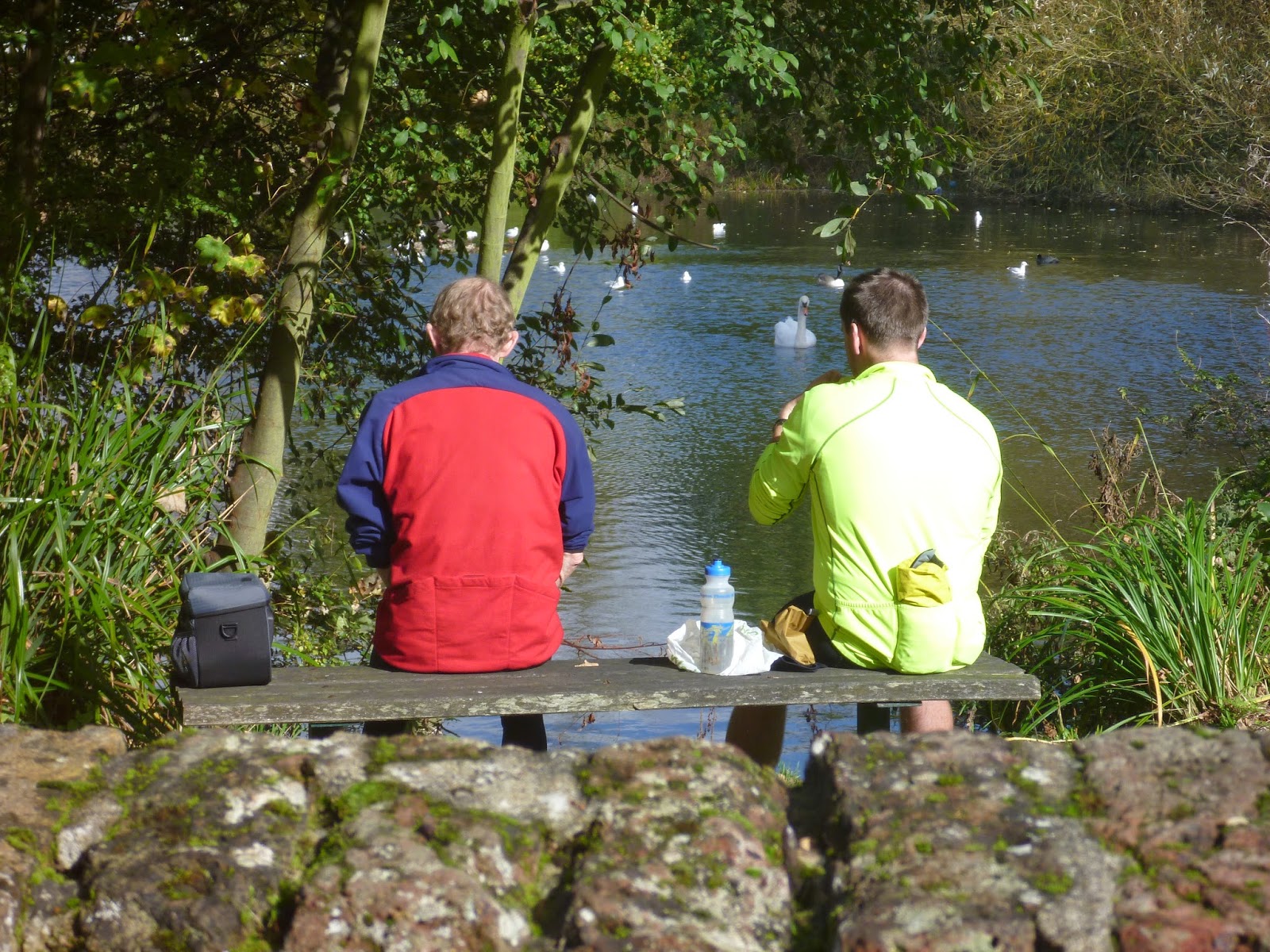 No room at the Inn for Neil and Paul 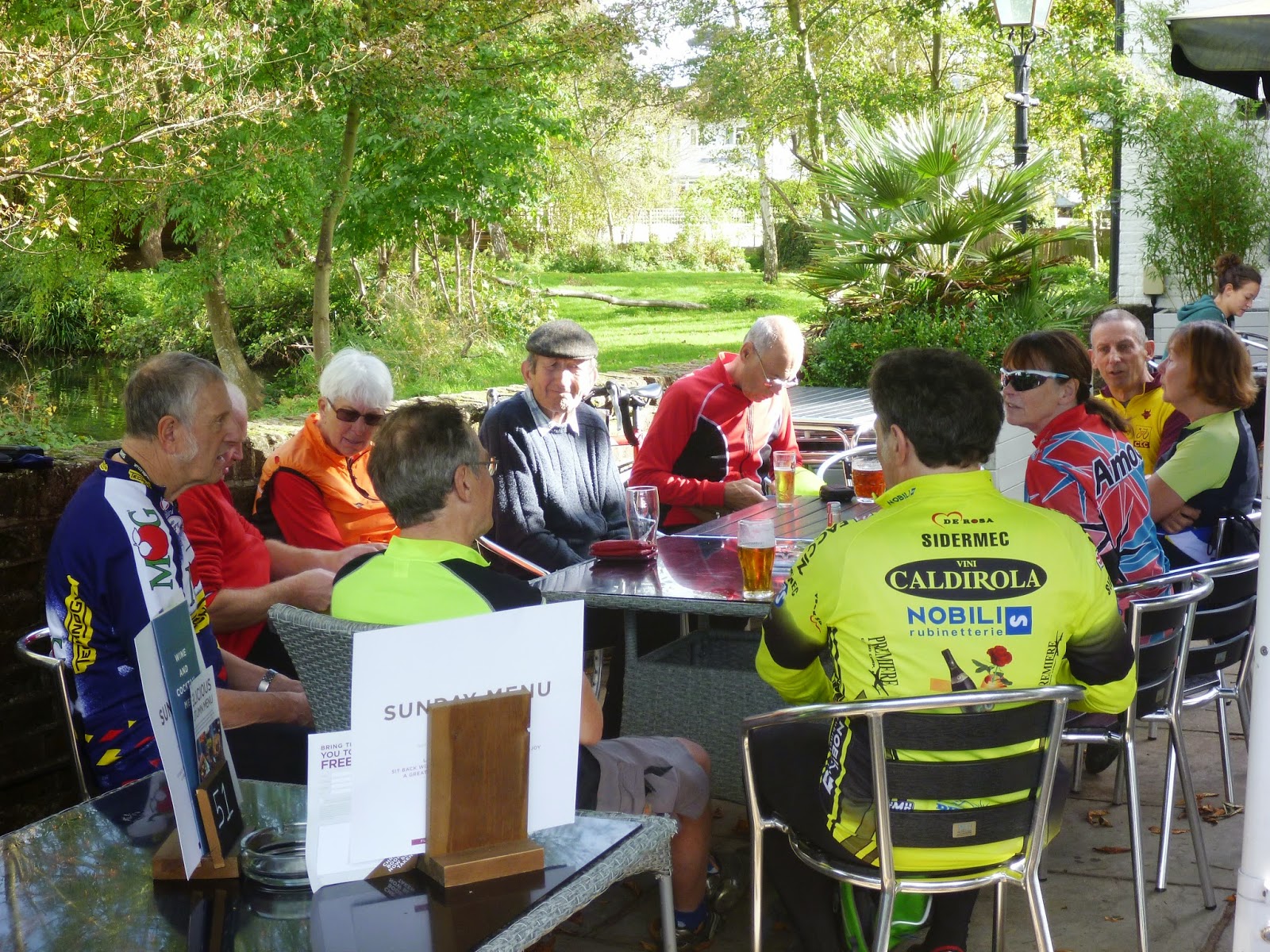 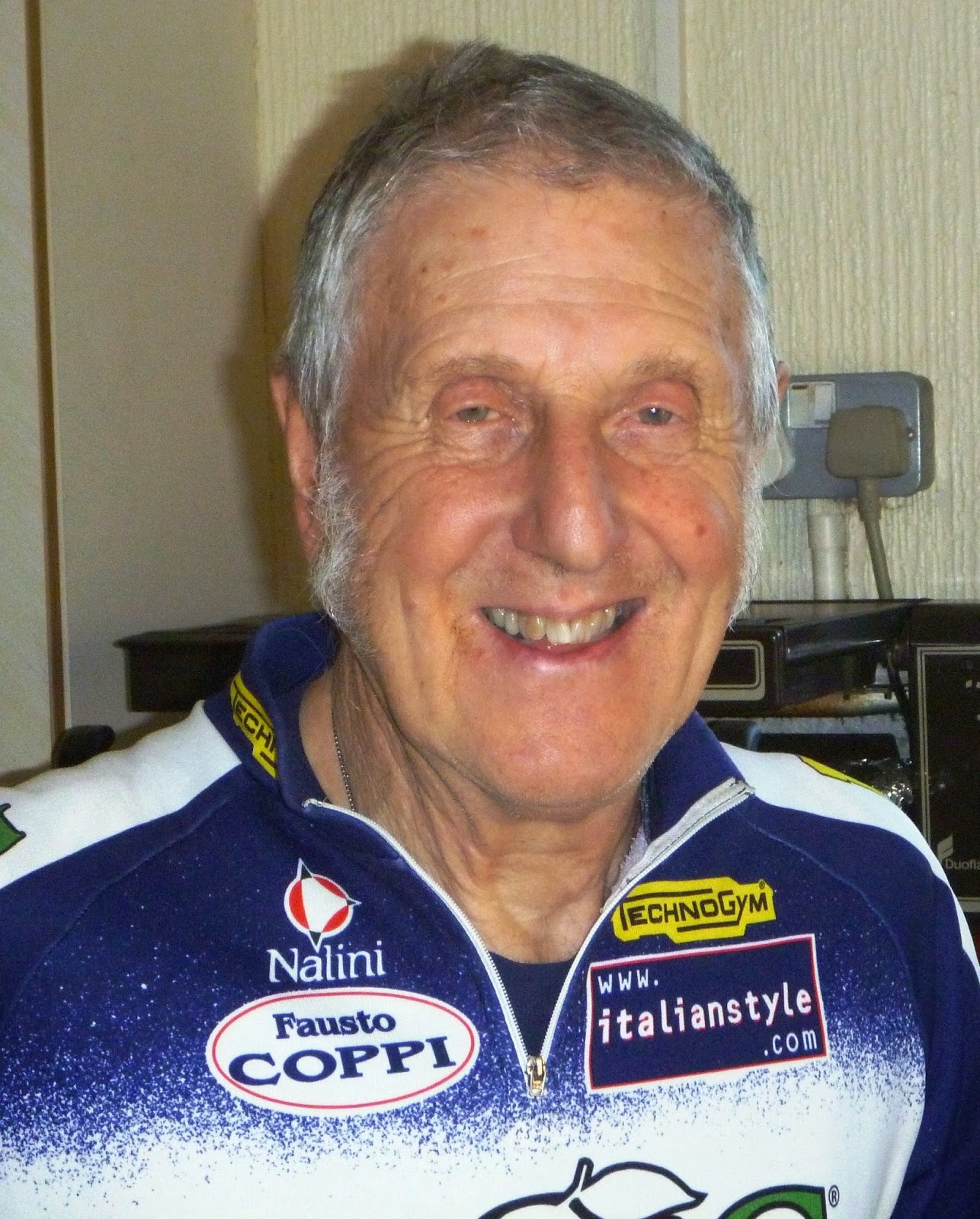 Our thanks to Ed for hosting the AGM

The serious business of the day

A tribute to Simon Legg & the FNRttC

It is 2 years since I did my last FNRttC. Simon has decided to go to pastures new but I decided that I would try and take part in his last two rides (Bognor & Southend). Frankly I found this it a big challenge and as Simon suggested I am getting past it and I am sure that my wife would agree it happened 20 years ago! Not withstanding that I made it and will do my utmost to get to Southend a ride I have never yet done!
Before the start on 10 Oct for Felpham I met a friend in London and after a few pints (too many) I came across the Bomber Command Memorial which I have not seen before. Personally I think it is appropriate and clearly the Queen felt the same! See photo's below along with a dawn stop near Arundel where we waited for a multiple puncture culprit! There is always one and he was a very nice chap! 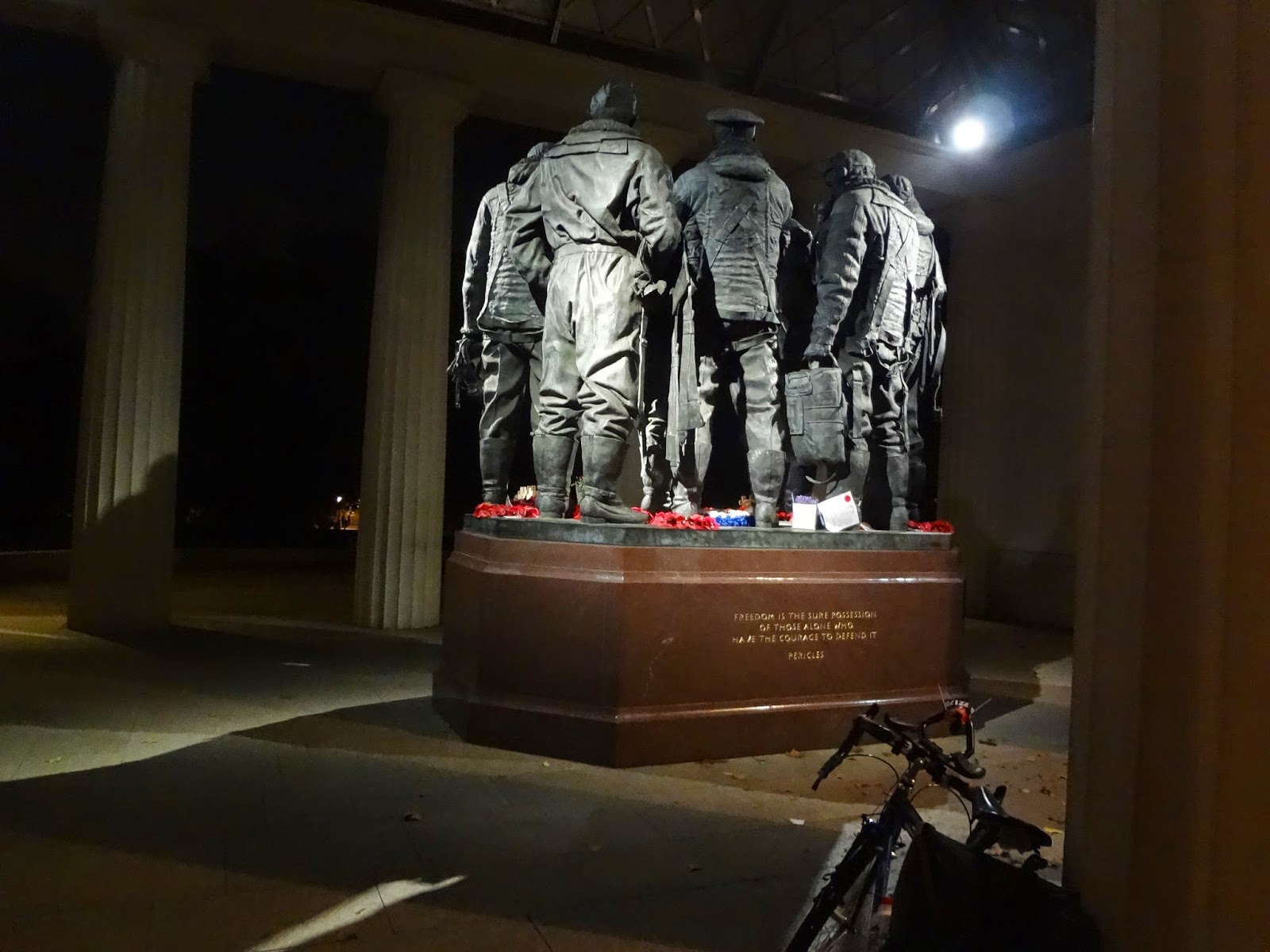 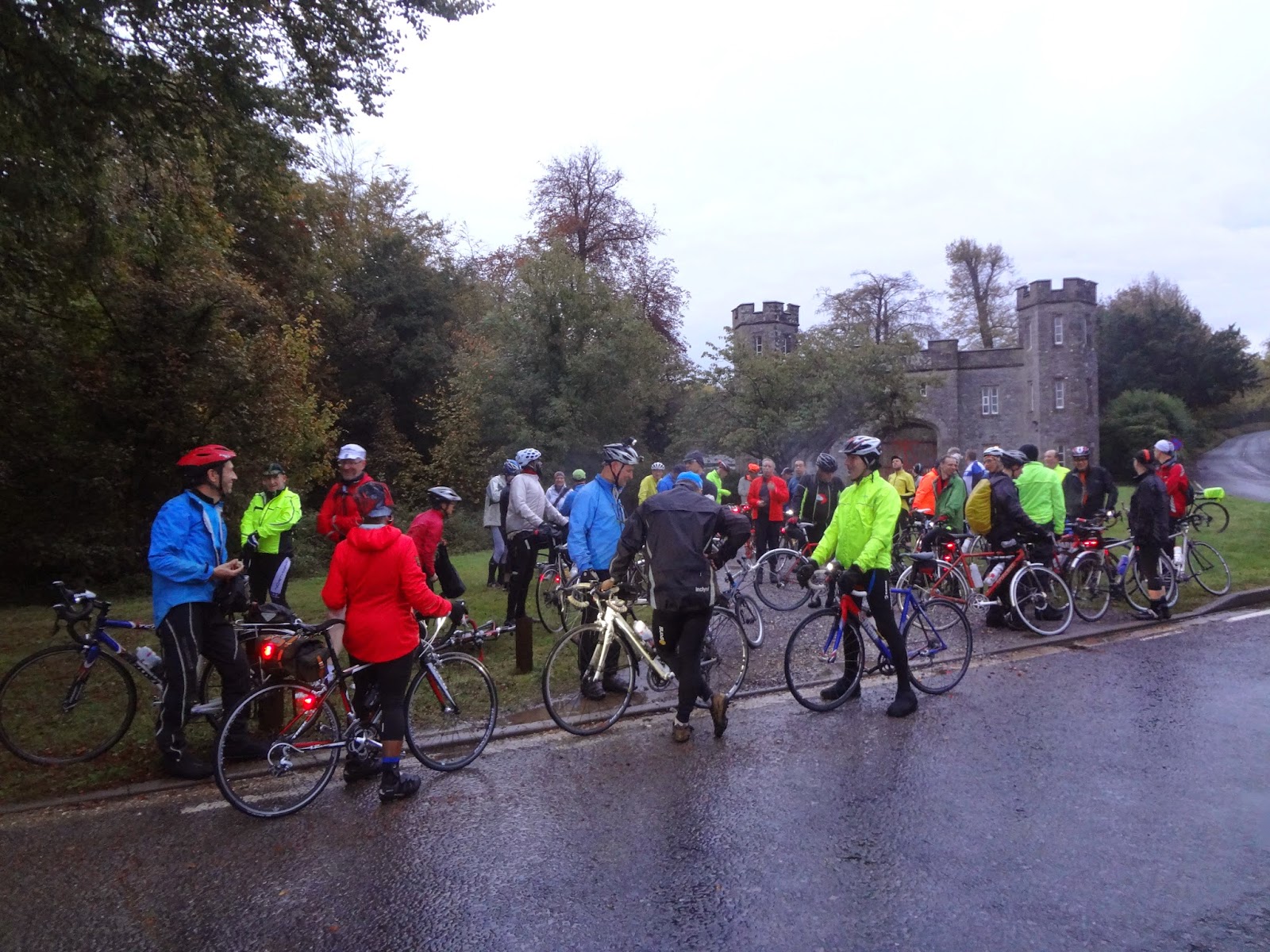 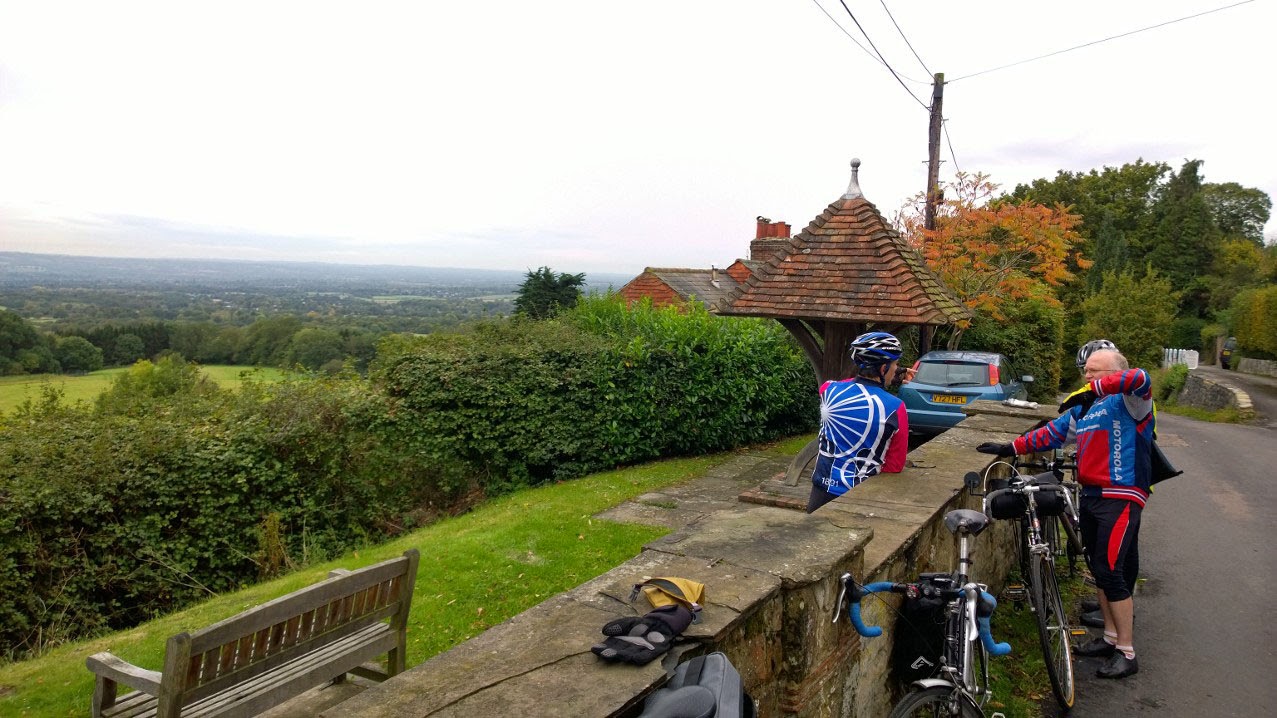 Resting after a hill climb 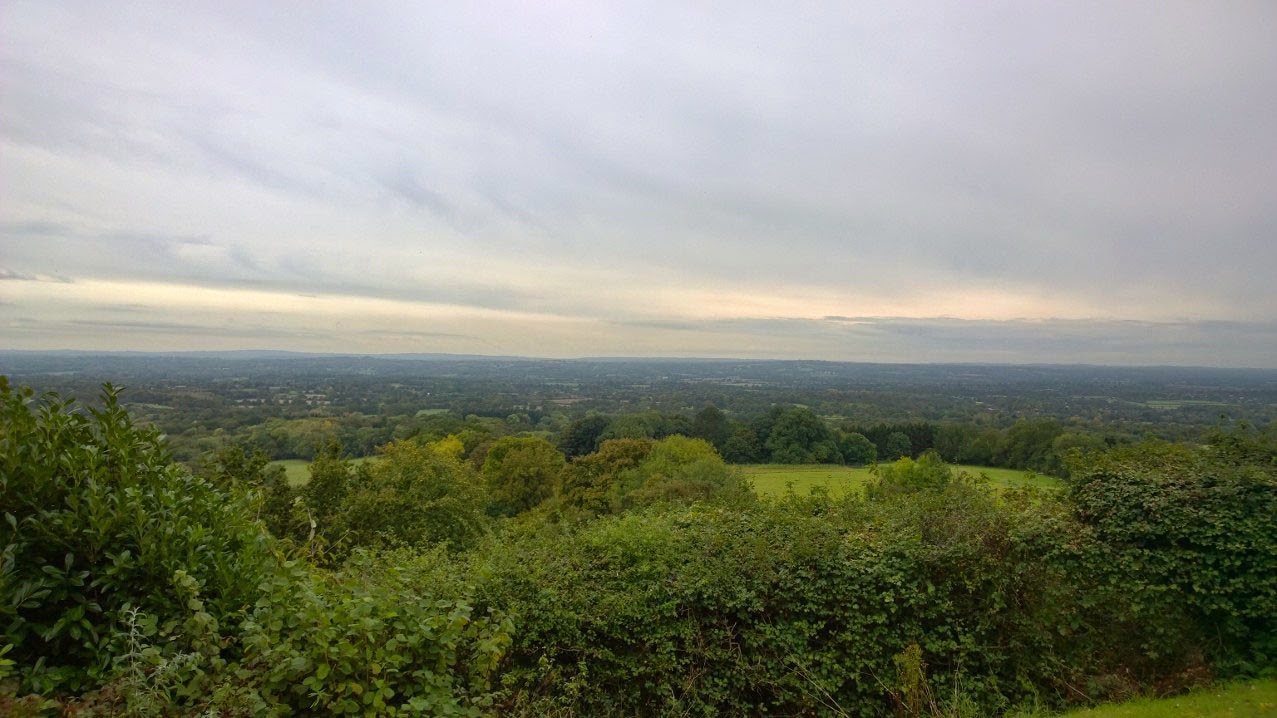 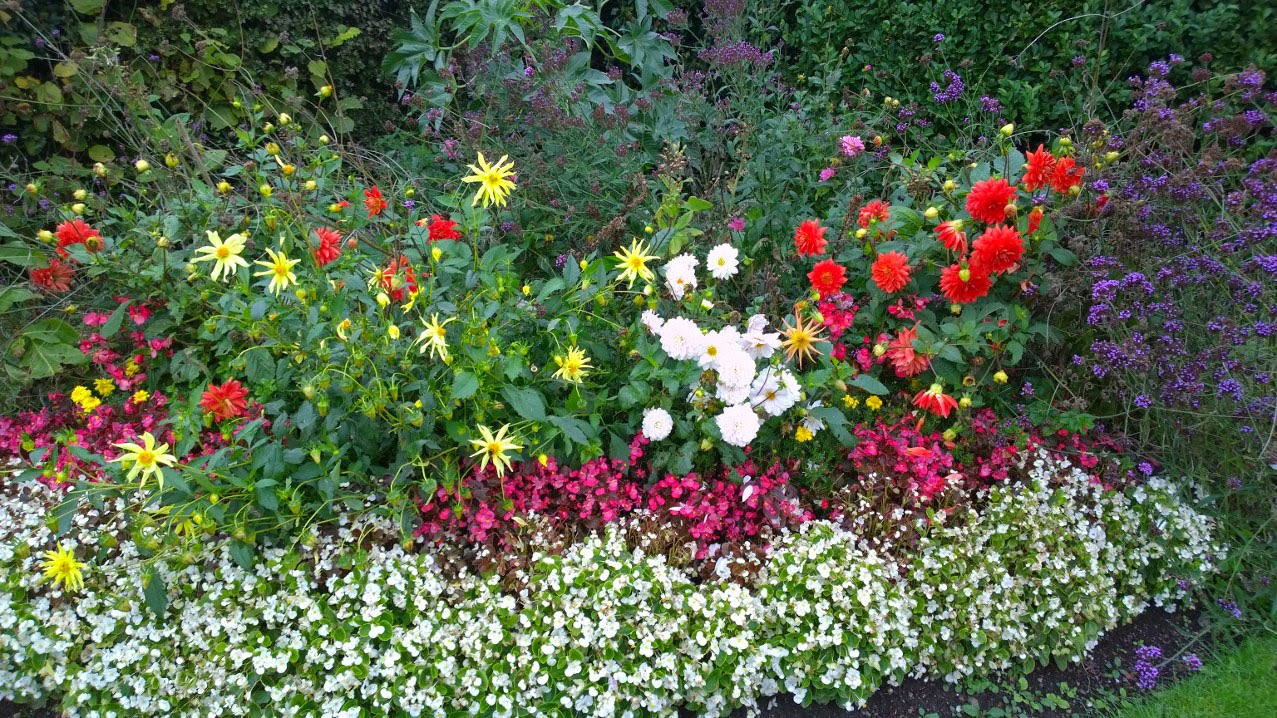 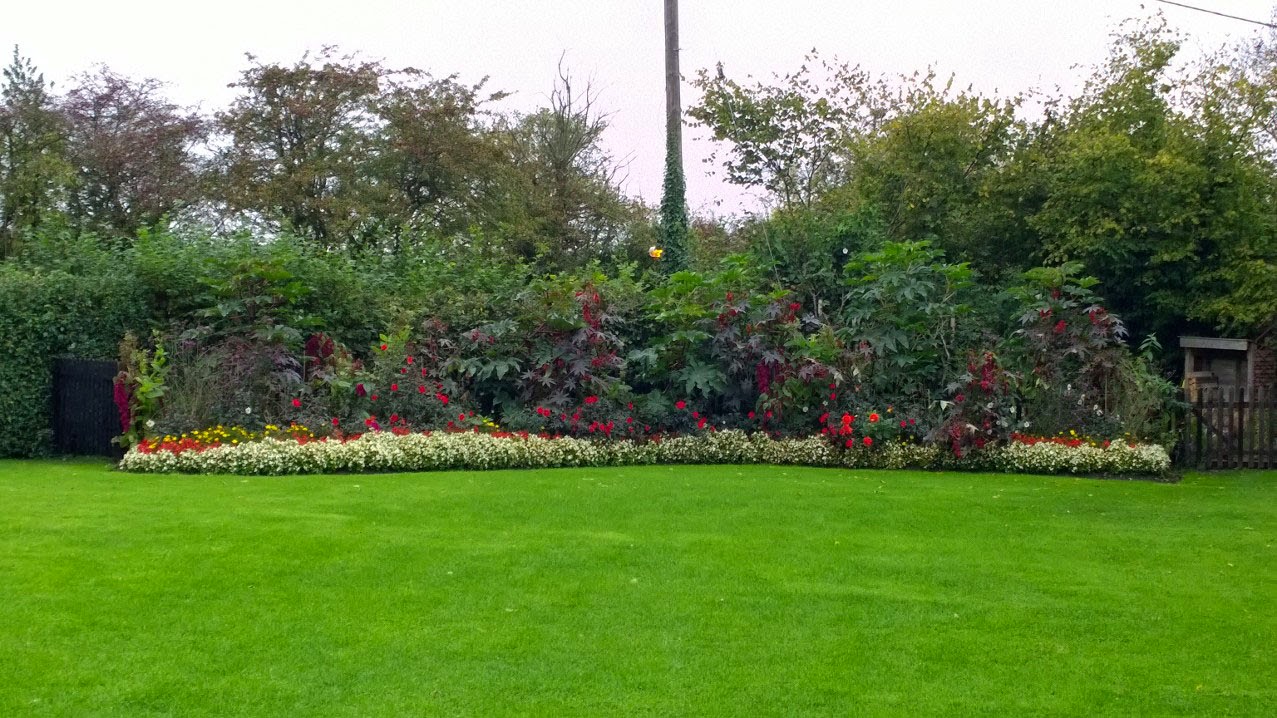 Mini disaster at the start.
My water bottle (not bidon) had leaked into my musette causing my Nokia 3210 circa 1999 to flood with water.
As I write, it's drying off but the chances of it actually working again seem slim.
I led three to Purley then the quiet A22 to the "Ann Summers" r/b.
Uphill past Woldingham station and the North Downs Golf Club.
From there you're just a short distance to Westerham via the long downhill sweep.
Cyclists were coming from all directions...............not suprising since this was the "hill climb" weekend with the Catford CC's Yorks Hill just a stones throw away from our elevenses at Chartwell.
Friend of Dave, a nice chap called Ian was nearing the end of his twice yearly stay in the UK and was due to fly back to South Africa this very evening after emigrating there.
A 10.10am arrival at the deserted café allowed for a leisurely alfresco break on this bright early autumn day as first Bob then Ian and finally Daniel made their appearances.
A long downhill to Brasted swiftly followed by Hogtrough Hill to The Blacksmiths Arms at Cudham for an early lunch.
The pub has a history going right back to 1628 and has one of the most lavish "smoking areas" I have ever seen with books and a tv too.
Apparently the garden has won awards which doesn't suprise me.I've never seen so much colour in a pub garden in early October as witnessed today.......probably due to the warmest September since 1910!
We were at the Bec CC hill climb shortly after it's 2pm start and Daniel not suprisingly and perhaps wisely aimed straight for the tea & cakes............I queued for 20 minutes at 3pm.
In one of the biggest crowds that this event is ever likely to see, most were here for just one reason.................to see Garmin-Sharp professional rider David Millar ride his very last cycle event and first hill climb, before retiring.
His wife (Nicole) also rode joining many more women,juniors and vets.
A whopping 142 riders and he was number 130............about 4.15pm.
ITV's cycling front man Ned Boulting told the PA guy he would ride next year..........possibly a joke but who knows?
Dave's time was 2.03 and the winning time remained at 1.53 as we headed home. (update in due course).
Light rain and a strengthing wind meant many left before the last rider (including us). 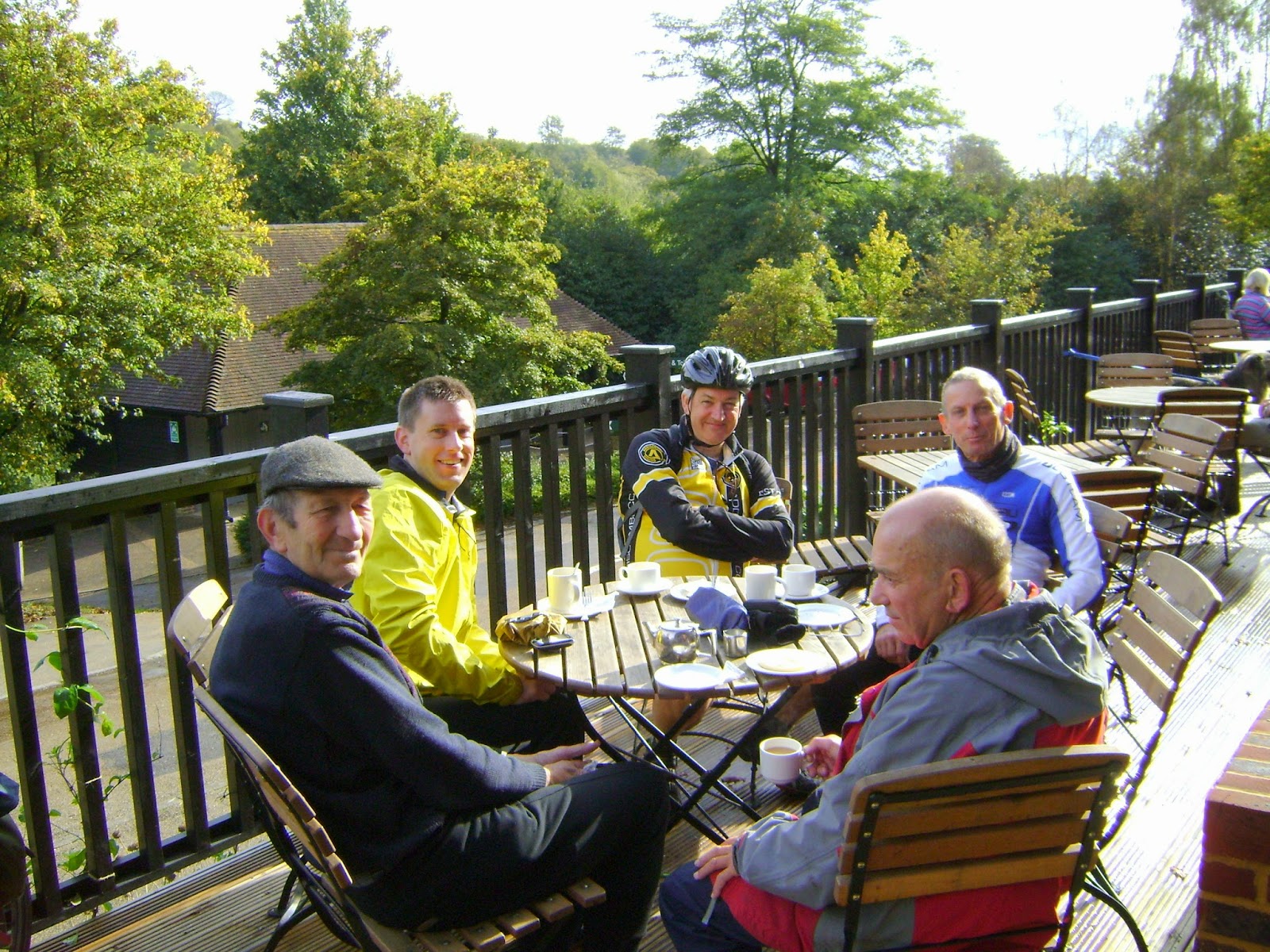 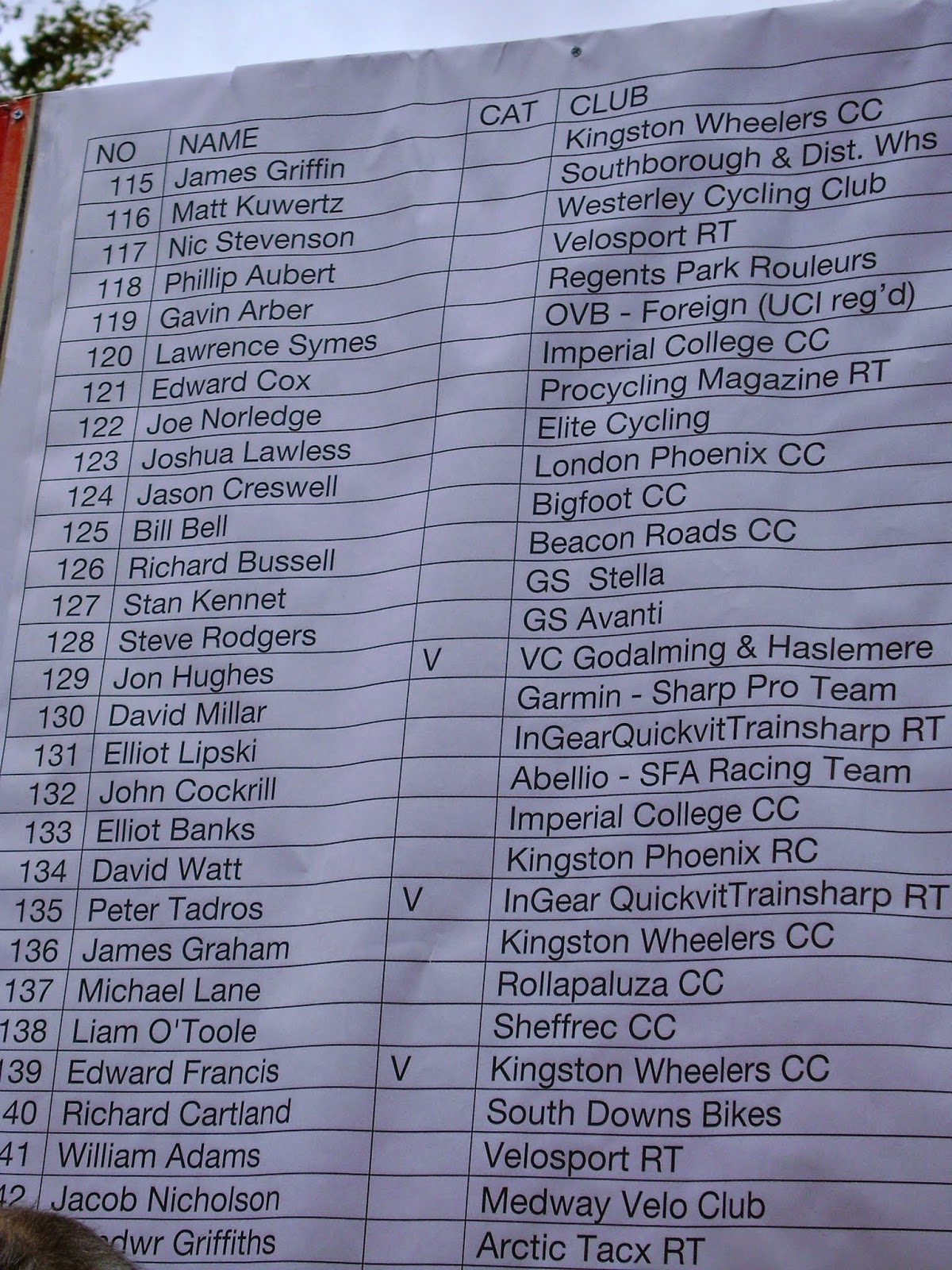 Nicole Millar @lastfastbike
What an awesome day. #BecHillClimb was quite horrible and hard but brilliant. David is done, done, done. I am in bed I am soooo tired. :-)
If you want to see what 700yds uphill looks like.......unnamed rider has a helmet cam:
https://www.youtube.com/watch?v=_hENH_bVgzw

William Fotheringham's article on David Millar in The Guardian


The devout pilgrims of C&M wended their way first to Holy Trinity at Rudgwick and then to the Church of St John the Baptist at Capel. Quite incidentally, their devotion was rewarded at the King's Head with crayfish tail sandwiches washed down with ale and at Capel with temptations not to be resisted.
Posted by Jeff at 13:16 No comments:

Either longer breaks or extra miles would be needed to prevent an premature arrival at Capel. I settled for the latter.


Of the eight at a crowded Tanhouse Farm, five rode forth to Rusper, Capel and Ockley. After a mile on the B2126, we turned into Mole Street but not for long. The Gosterwood Manor Farm road has fine view of the Greensand Hills (that's my excuse) and at one time must have been paved. Now it's "patchy" west of the farm but even the editor came through unscathed! In Forest Green we encountered backmarkers on Cycling Weekly's Box Hill Original Sportive. Still too early for lunch we changed directions heading northwest from Walliswood to Hurtwood Park Polo Grounds and south past the Wheatsheaf to Ellens Green and more backmarkers. Bob and Ed now rejoined for a leisurely lunch having taken shorter routes to the King's Head in Rudgwick. After the morning meandering,  we settled for a crow road to Capel.

A bright but autumnal day with a chill which persisted until ten and reappeared before three. Around 75 miles door to door (only a third between 11s and tea).

PS: This is a lot more fun.

Posted by RaasayWarden at 22:29 No comments: