May/June issue of The Sou'Wester

The latest issue of The Sou'Wester is available on the website here.  Thanks to Colin, there is a printed version and over the next week or so, Colin and helpers are using their daily exercise to try to deliver to those who are likely not to get to see a digital version.
Posted by Simon L at 09:45 No comments:

Anyone been out riding?    There are reports of solo rides appearing on the Beginners blog, and the Wayfarers blog: take a look if you are interested.

If you want to post something on this blog and you're not a regular author, just send an email (maybe with a picture or two) to one of the authors, and we'll try to post it for you.
Posted by Simon L at 20:01 No comments:

Look up the MWW website to see the latest Coronavirus Update 3, which notifies members of the cancellation of all forthcoming rides, with immediate effect.

CUK has updated its advice, which is consistent with this decision:

Please pay close attention to the advice in the latest Update 3 on the MWW page.

This is no joke. The doodlebugs didn't get me and and mine, nor will this blooming bug.

Look after yourselves and your closest.

Riding into a steady sou'wester I was joined by Paul in Effingham.  There were six of us at 11s (GFH, Bob, Paul, Dave, Terry, Vic). The roads and Squires West Horsley seemed quieter than normal. There was no great enthusiasm for Shamley Green or anywhere else and with afternoon rain forecast, most headed home.

Yesterday evening's advice from the government coupled with our age profile suggests our self isolation period should be 12 weeks rather than the previous two. Should C&M suspend all activities for an indefinite period?

Posted by RaasayWarden at 07:34 No comments:

The instincts of a former Rides Sec. are never lost. Bob Eberhard has kindly identified most who attended the ride on 8 March. However one MWW rider has not yet been identified. In the absence of a group photo, will that rider please step forward, so that his name can be added to the roll of honour for 8 March?

P.S. If you are a regular reader of the Attendance Record, you may have noticed that the top line giving the month seems to be missing. It is not but has a wilful mind of its own and keeps moving to the bottom of the sheet, however often I replace it. If anybody has a Google Doc solution, I shall be most grateful to hear it.
Jeff
Posted by Jeff at 11:53 No comments:

The advance of Coronavirus is an increasing cause of concern.

We have members who are vulnerable if infected, and we also encounter vulnerable people in the day centres we visit.
As previously announced the committee will post regular updates in the light of our circumstances and based on government advice.
I hope everyone is keeping well. There are several things we should all do to avoid catching the infection, and spreading it. So, for the foreseeable future could you please:-
·      Wash your hands frequently and thoroughly, including when entering a day centre, or use hand sanitiser gel.
Stay at Home for 7 Days if you believe you have symptoms (high temperature or a new cough) and contact NHS 111 if your symptoms get worse or do not get better after 7 days, or if you cannot cope at home.
Check developing NHS advice at (https://www.nhs.uk/conditions/coronavirus-covid-19/).
Do not join one of our rides while you have symptoms and inform a member of the committee (Dave Vine or Tim Court). If you need assistance from us tell a committee member and we will do what we can to help.
Monitor this Blog and brief people you think may not read any of our Blogs.
Ride Leaders, we are in contact with Day Centres but please identify a suitable alternative meeting place for your ride, in case we are barred at short notice.
Further advice is available on the CUK website reinforcing these messages.
Please ask a committee member if you have any questions or concerns.
Dave Vine
Dave Vine: d.vine207@btinternet.com
Tim Court: timcourt50@gmail.com
Posted by Jeff at 17:28 No comments:

I experienced little difficulty reaching Shamley Green on Wednesday but if the truth be known I spent Thursday morning thoroughly cleaning my bike.

With the C word growing ever important and the weather conditions staying as they are, I suspect some may not wish to repeat my experience this Sunday.

The Downlink was fine but the path off to Shamley Green was watery! The alternatives are the even hillier routes from Farley Green or Chilworth or the B2128, not a road for us slowcoaches.

So the question is: should we switch the lunch to say Woking Wetherspoons? Chosen as there are no rail services through Guildford (or Kingston, or Staines to Windsor). We can decide when we meet at 11s on Sunday assuming that's still possible.

PS I've received an email from Brunel University seeking views on road cycling. If anyone cares to complete their online questionnaire, just shout and I'll forward the email. Prizes to be won.
Posted by RaasayWarden at 08:10 No comments:

Advice to all members

In the light of the rapidly evolving threat of the coronavirus, the MWW Committee has met to consider its possible implications for riders and the venues that we visit. I attended this meeting as Cheam and Morden Rep. The outcome was to develop some straightforward advice for members.

It is therefore recommended that this advice, issued by Dave Vine and Tim Court (Chair and Sec of MWW), already posted on the MWW and Beginners blogs, be available to and adopted by members of Cheam and Morden. See below.

Our Cheam and Morden contacts to notify will be:

"The advance of Coronavirus remains a cause of concern.
We have members who are vulnerable if infected, and we also encounter vulnerable people in the day centres we visit.
The committee have discussed a measured response suitable for our circumstances and based on government advice.  We are in touch with day centres and will post regular updates on our Blogs.
There are several things we should all do to avoid catching the infection, and spreading it. So, for the foreseeable future could you please:-
·         Wash your hands thoroughly, including when entering a day centre, or use hand sanitiser gel.
·         Contact NHS 111 if you believe you have symptoms (high temperature, cough or shortness of breath) and be prepared to self-isolate until you have clear NHS advice.
·         Inform a member of the committee (Graham Hill or David Ward) if you have symptoms.
·         Check developing NHS advice at (https://www.nhs.uk/conditions/coronavirus-covid-19/).
·         Continue to monitor our Blogs and brief any members you think may not read our Blogs.
Please ask a committee member if you have any queries".
Dave Vine
Dave Vine: d.vine207@btinternet.com
Tim Court: timcourt50@gmail.com
Posted by Jeff at 18:03 No comments: 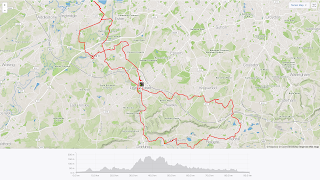 Just for a change it wasn't raining when we gathered at Wetherspoons, Leatherhead, for elevenses.  There were some complaints about the lively westerly breeze, but the morning sunshine had still tempted quite a few riders out.   Richard, Pam, Ed, Maureen and Bob didn't continue for the rest of the ride, leaving Graham, Ged, Ray, Terry, Keith and me to cycle off for lunch at Redhill, with Mike Morley, still recovering from his recent op, planning to head there  by car. 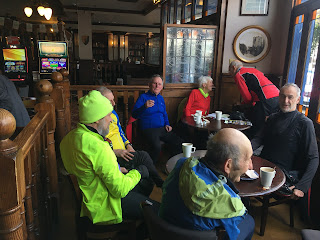 At about 12 miles, it wasn't a very long ride to lunch, but Mike still beat us fairly and squarely in his car!  In our defence we we did take quite a hilly route up to Headley, then down the dip and back up to Walton-on-the-Hill, before some short, sharp shocks around Mugswell and Upper Gatton.   And Ged got inveigled into helping a horse rider with a loose saddle and an uncooperative horse.   This operation was unsuccessful, but, fortunately, they were heading the opposite way to us! 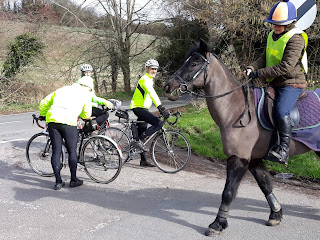 We met up with Mike again at The Sun at Redhill.   The service was particularly good at this Wetherspoons despite the busy Sunday lunch trade, and we were ready to leave well before 2.00 pm, just as well with the brisk head wind.  After saying our goodbyes to Mike we headed west via paths and back streets to skirt Reigate, then crossed Reigate Heath towards Brockham.   There was no appetite for either the Coach Road, or for tea, so we took a longer than usual stretch of the A25 to reach Pixham Lane, after which we all soon started to head off our own ways home.

Many thanks to all for your company