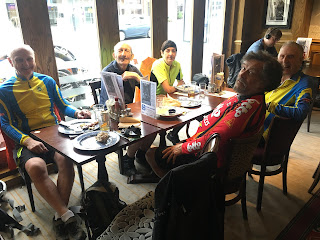 It was a funny old day, warm and sunny one minute then overcast, cool, and breezy the next, and there was worse to come...  Anyway, nothing in the weather forecast deterred Graham, Bob, Ed, Lilian, Ray and me from meeting at Fairoaks, and we all duly set off for Farnborough, Bob by his own route, and made good time there.   While having lunch we spotted the first signs of rain which no one, least of all the forecasters, had expected, or was prepared for.   Naturally, it had really set in by the time we were ready to set off for home and we decided to hold off for a bit.   This paid off, the rain quite quickly fizzled out, and we were able to execute our plan for a closer inspection of St Michael's Abbey, except that we didn't manage to get all that close!   It was a good run back from there on with the rather strong breeze now on our tails but, nearing the planned tea stop, it began to drizzle again and I decided to push on.   A shame about the rather mixed weather but thanks to all for your company.
Posted by David W at 18:53 No comments:

The forecast was dull all day. I could feel spots of rain as I was passed constantly by much younger cyclists on the old Portsmouth Road to Cobham. Sainsburys at 0950 was an almost empty car park and not even Bob for company. But eventually we swelled to double figures.

At 1115 we left behind Bob, Jeff and Terry as we exited via the back gate on a very familiar route to Martyr's Green and Ockham. Thanks in part to the lengthy stop, I was soon in search of bushes as subsequently were others. We continue through Send, Old Woking and Mayford arriving at The Royal Oak Pirbright at 1244, a minute early.

Fortunately I'd booked as no food was being served alfresco due to staff shortages and/or equipment problems. So seven (GFH, Anne, Dave, Pam, Ray, Tony, Vic) crowded around a table set for six to enjoy child roasts at £4.49!

After a chilly start it was by now pleasantly warm; scarce any wind and occasional glimpses of the sun. Nul point for Pinnocks so the unplanned return went: Fox Corner, Worplesdon station, Mayford, Woking Leisure Centre and the canal to the Weybridge Garden Centre which naturally is in either Addlestone or New Haw.  50+ miles door to door.
Posted by RaasayWarden at 08:18 No comments: 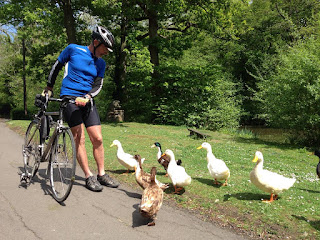 Still no news on Muddy Lane

but if you scroll down this webpage https://elmbridgecycle.org/, you'll discover that Highways England are seeking the views of local cycling groups.

Should we (or SWL) register an interest?


Posted by RaasayWarden at 07:21 No comments:

Tomorrow's ride will be 11's at Squires, Stoke D' Abernon.

A leader and lunch venue will be decided on the day.