I was awake well before 5am and with an early start in mind,I was up and about getting ready to leave home at 8am to arrive at Dorking Leisure Centre (9am) for the last long ride of 2013.
We left the 20 or so riders of the Dorking Cycling Club on their 2nd anniversary ride and took a familiar route to Wisborough Green (elevenses) including the delightful lane south of The Haven.

According to Wikipedia:
"The actor and actress, husband and wife James Bolam and Susan Jameson, live in the village. Pink Floyd guitarist David Gilmour lives on a farm just outside the village".
The cafe in the village was pricey but the quality was good and served swiftly.

The road south to Fittleworth went up a 15% incline but afforded a lovely run down the other side,probably worth the effort.
A switch back lane took us via Coldwaltham and Rackham to Amberley.
We continued the short distance to Houghton Bridge (1.15pm).
Most were attracted to the alcohol in the Bridge Inn whilst Graham and myself enjoyed the views across to the South Downs from the Riverside Tearooms.
It was a job to get going after well over an hour relaxing but we eventually did.
After West Chiltington,we made good progress north to Barns Green then north east to The Conservatory cafe in Horsham Park.
The sizable portions of cake didn't seem to slow down the majority and as in previous weeks,I was tiring around Newdigate.
I limped home with Helene keeping me company.
I clearly suffer on long rides with typically 5 hours sleep the night before.

I'm now off on a train ride to Amberley to retrieve my cape which I left hanging up in the garden..........doh! 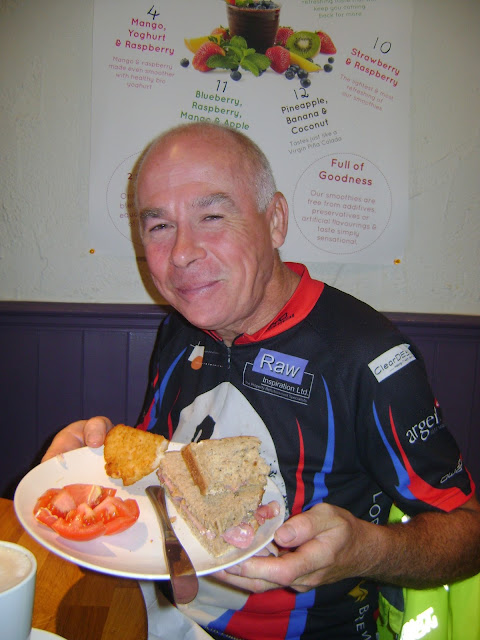 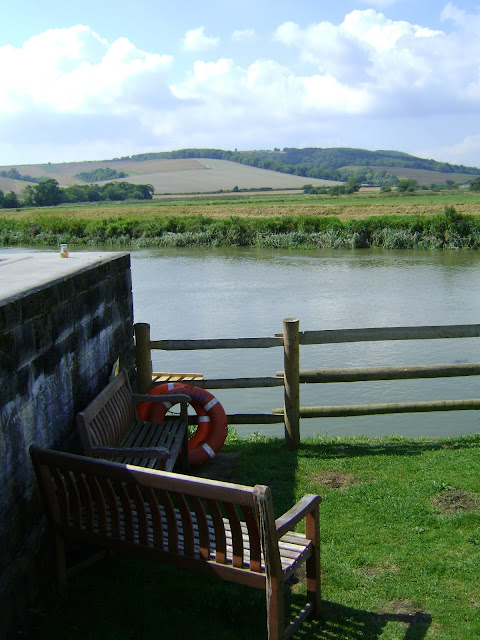 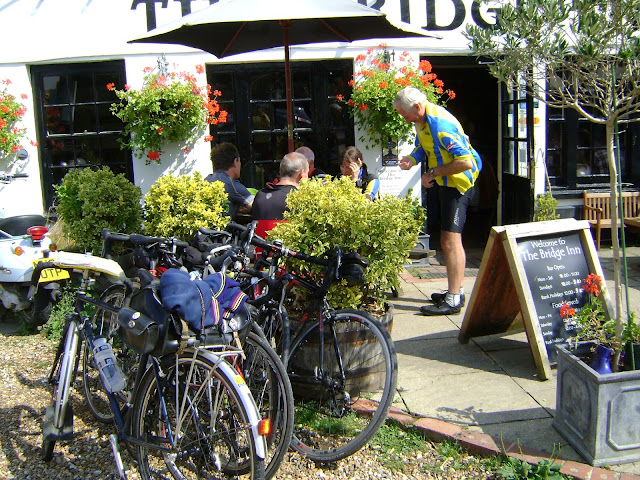 Posted by Tartan Socks(long) at 12:41 No comments:

Lunch at the Stag & Huntsman Hambleden 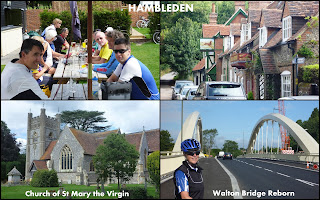 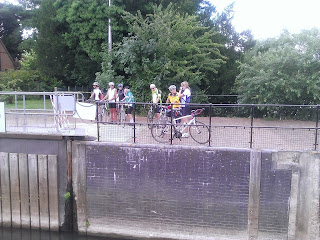 The unlucky few who did not make the crossing before the gates opened.

Rather than relaxing in the arms of Morpheus or Nyx, you can join Janice and  I at Kingston Bridge at 0845 (prompt). We'll try to catch up with the others at Dorney Court or, failing that, at Hambleden (note spelling). I'll be taking my usual roads so there may not be time for "full english", etc.

Graham
Posted by Anonymous at 12:36 No comments: 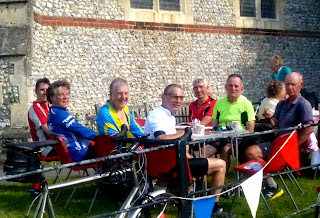 After light rain stopped and we'd helped Brian finish his chocolate cake seven of us set off from Henfold at a fast pace thanks to Ray joining me on the front. Fortunately for us he turned off just before Rusper and we followed the popular quiet route to The Red Lyon at Slinfold via Warnham and Broadbridge Heath. Service was a bit slow but we hadn't a long way to go afterwards and it was a fine day. Chris joined us here.

The return trip was a short, not too busy stretch of A29 to Buckman Corner then back to the lanes to The Haven, Bucks Green, Ellens Green, Okewood Hill and Capel. Major panic set in at Newdeigate (it was thought North Holmwood church would stop serving teas at 1600, it was now 1535) . Graham couldn't face a second consecutive cakeless Sunday so set off determined to arrive before closing time. We all arrived in good time to meet Daniel waiting for us and enjoyed assorted cakes and tea. Suitably refreshed we headed for Dorking and turning into Chalkpit Lane avoided the town centre and later made our own ways.

Distance for me home to home was 60 miles. 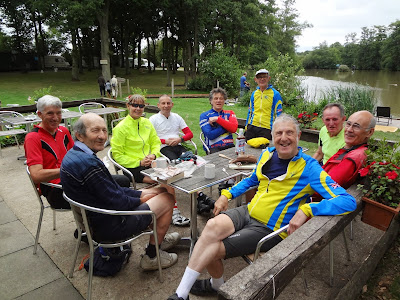 Still without JT in USA this happy bunch enjoyed tea & cake in somewhat drizzly weather at elevenses. Good to see them happy & Brian G thanks for sharing the generous portion of chocolate cake!

For the record I spotted Janice and Mark G in Richmond Park; they were some 10 minutes apart. And Mike B was riding up among many walkers near Leith Hill Place. Janice tells me she finished in 6 hours 20 minutes (16.1 mph).

PS Why am I the last to know? - 3/4 of Tanhurst Lane has been resurfaced. Did they run out of tar? Both ends are smooth; fortunately the rough section is before it gets really steep.
Posted by Anonymous at 09:28 No comments: 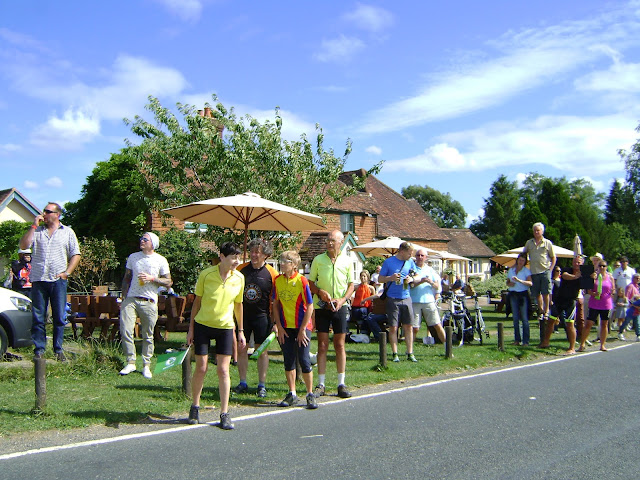 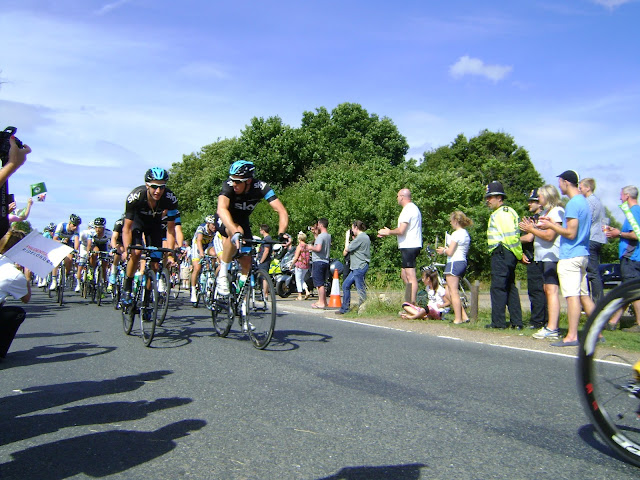 Won by France's Arnaud Demare in bunch sprint.
Boris Johnson completed the London Surrey 100 but punctured in Cobham and was assisted by a local.
Posted by Tartan Socks(long) at 19:57 No comments: 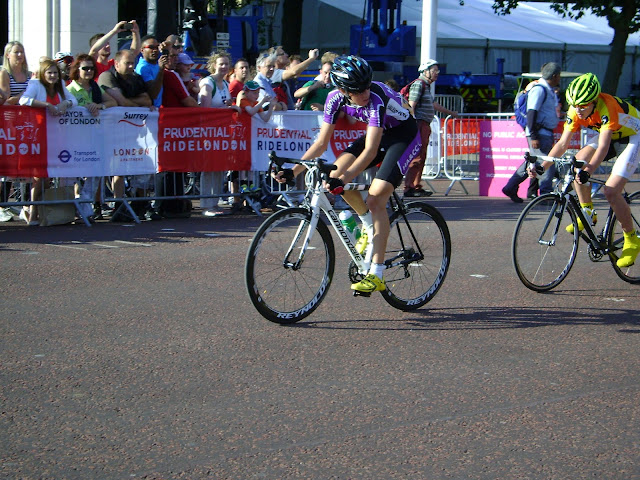 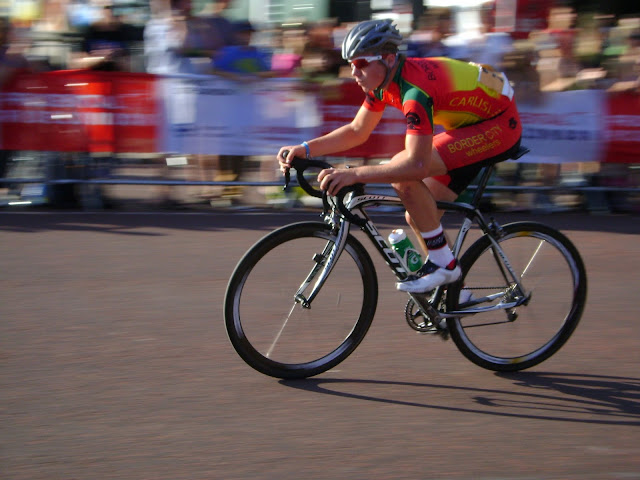 Posted by Tartan Socks(long) at 21:47 No comments: