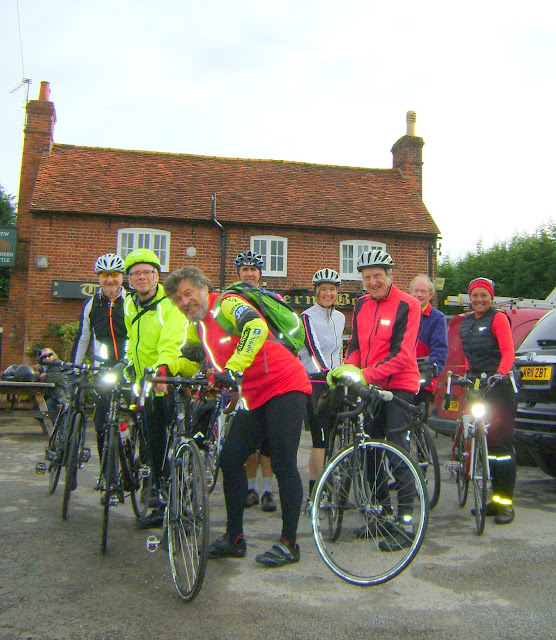 Posted by Tartan Socks(long) at 10:51 No comments:

Exactly six hundred years on we happy few fits but not we band of brothers as the two(!) newcomers included Jennie, an occasional midweeker. As explained in the previous blog, an enforced change of lunch venue saw me playing safe and opting for an old favourite and slightly reduced mileage.


We took the my usual route from Hampton past Feltham's sheep and on to Sunbury, Ashford and Staines. The first level crossing was closed - will we ever learn? Sneakily the Editor kept to the main road so reached the Runnymede tearooms ahead of the bunch. A dozen plus Squirrels was the score with a surprise visit from the Trencherman. To avoid any confusion it was the other newcomer (also called Daniel) who took a tumble in Bushy Park. In some discomfort he turned back at 11s (the hospital later confirmed a broken arm).

I had surveyed routes through Windsor town but on such a fine day we had to use the Great Park. I can't recall when last C&M climbed Crimp Hill but today it did. As we were discovering throughout the ride, the Extra Hour generates extra traffic, and extra (jay)walkers in the Royal Parks.  The New Leathern Bottle at Jeallot's Hill was reached route at 1215. Despite an entry in the 2016 Good Beer Guide, the other "customer" was a child playing on a tablet. Most opted for proper nosh but the slowish service could be overlooked thanks to our early arrival and the gargantuan portions.

The return was equally familiar - Warfield Church, North Ascot and across the Racecourse. During a second transit of the Park, we espied an extensive film set close by Ascot gate. I punctured at the top of Tite Hill; Andy was called upon to lead to Laleham while Neil produced a necessary second(!) tyre lever when I stopped twice to replace the inner tube. Despite the long delay we rejoined at the garden centere where the light was frittered away in idle gossip. By four we went our various ways. My first lights of the winter were needed for the last three miles. Around 55 miles door to door.
Posted by RaasayWarden at 07:34 No comments:

Or more mundanely change of venue.

I thought I'd uncovered a wonder of the age, a long closed but now re-opened country pub (The Star, Waltham St Lawrence). Unfortunately it closed last Saturday (18/10) after only seven months.

The lunch stop will now be that old favourite, Leathern Bottle, Jeallot's Hill
Posted by RaasayWarden at 14:19 No comments:

The AGM for CTC South West London will commence at 11:02 in the Hersham Amenity Hall on Wednesday 11th November.

The date and time coincides with Armistice Day so we will observe the 2 minute silence before the meeting starts. Please be in the hall by 10:50 to ensure that you have time to find a seat before 11 o'clock.

Signing in and distribution of the agenda and other paperwork will take place after this moment of quiet.

Should you arrive late the silence will be observed in the cafeteria and throughout the premises by the staff and regular clientele of the Day Centre.

It is the custom to award the Arthur Jessop Shield to recognise outstanding achievement in the club. If you wish to nominate someone for this award please communicate with the secretary or a member of the committee.

Tim Court
Secretary
Posted by Tim C at 11:39 No comments:

Check out their faces! 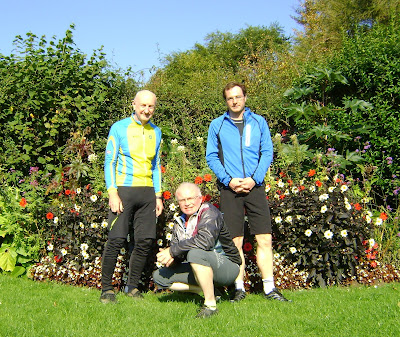 I managed to lose the only other rider with me riding to Cafe Talis,West Wickham.
Richard suspected he had a slow puncture so had fallen behind.
Good establishment that served our needs which in the case of Richard was a sizable portion of Victoria Sponge.
We were to be joined by Dave W,Ray W & a new member, Nick More all the way from Ealing.
We were Nick's 2nd ride with a CTC group (last week he was with the Central London CTC who had ventured out to leafy Surrey and one of my favourite tea stops....North Holmwood church).
The ride to Cudham was up and down.............well mainly up and lunch was enjoyed alfresco.
The former (new) leader of UKIP, Nigel Farage was spotted on an adjacent table.
Dave & Richard left us to make the short hop to the Bec cc Hill Climb event at White Hill.
We missed Mike Morley's ride but according to a local source  - Ray Dare, he recorded 4' 44".
Well done Mike!
You mad fool........hahahaha.

Sunny and warm (if out of the keen NE wind).
Posted by Tartan Socks(long) at 19:10 No comments:

The sun shines on the righteous 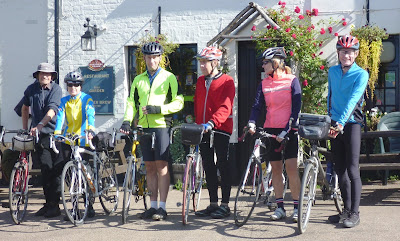 Sorry for the delay in this report but my steam-powered computer has been in for repair.

When I arrived at Woldingham Garden Centre Ken, Paul, Janice, Lilian, Bob and David Ward were already sitting in the sunshine tucking into refreshments. We were soon joined by Graham and Jeff.

A prompt departure was preferred as lunch was over twenty miles away and an early arrival at the pub had been agreed with the landlord to avoid conflict with two large groups. As a result Jeff agreed to finish his large bacon sandwich at his leisure and meet us later.

We started with the quiet and gentle climb up through Marden Park and past the school before swooping down Flower Lane to the A25. My suggestion to shorten the route by cutting out the next hill was rejected by some and so we passed through Church Town and up the rather steep The Enterdent  to reach the top of Tilburstow Hill. Down the hill and left just past The Fox and Hounds into Hart's Lane had us heading towards Oxted. A right turn at Perrysfield Farm took us to Merle Common.

From here Dwelly Lane took us past Haxted Mill, St Pier's Lane took us to the outskirts of Lingfield, leaving just a short ride into Dormansland and The Old House at Home.

A warm welcome and good food was promptly served and soon Jeff and Bob joined us.

After lunch the B2028 was used to get to Newchapel and then the quieter lanes to pass through Smallfield, north of Horley to Meath Green, and then Lonesome Lane to Doversgreen.

A vote was taken for the afternoon tea location and Reigate Garden Centre lost out to Denbies. So Trumpets Hill, Wonham Mill and Betchworth brought us to a short length of A25 to reach Pixham Lane and Denbies.

Four stopped here for re-hydration while others pushed on for home. 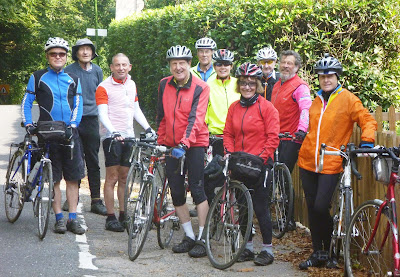 Terry led us in glorious autumn sunshine from near Gatwick to the lair of the recently revived Dragon, no Faffner. This was not a  Ride of the Walkyries, though we were sped on our way by three  winsome Rhine Maidens.

A dozen of us left Hookwood in cool but dry and mostly sunny conditions on a fairly circuitous route to Colgate. I had devised this route to keep us off busy roads and to be able to make a short cut to lunch if the weather changed (fortunately, it didn't). We headed north, briefly, forking left off the A217, shortly turning left to Norwood Hill where the Fox Revived is temporarily closed (awaiting reviving?). Passing through Charlwood we turned right into Lowfield Heath Road, past the Aviation Museum ('closed until early spring') and soon passed a house for sale which was a popular pub lunch destination - The Gate - which has been closed for some time. A gentle climb to Orltons led to Rusper (beware the car boot sale traffic), past the Royal Oak ('Pub to Let') then we headed south via Faygate, straight over the roundabout at the A264 and a further climb before a slight descent to The Dragon at Colgate.

It was warm enough to dine alfresco, the food was good and appeared fairly quickly. Lunch was fairly leisurely, we only had to ride to Capel where tea and cakes were to be served at three o'clock. We returned to Faygate, soon turned into Wimlands Lane and nearly saw another closed pub, The Frog and Nightgown then rode northwards to Capel, arriving at 1440 ie twenty minutes early but we were allowed in. After a leisurely break we headed for home via Newdigate and, for some, Dorking.